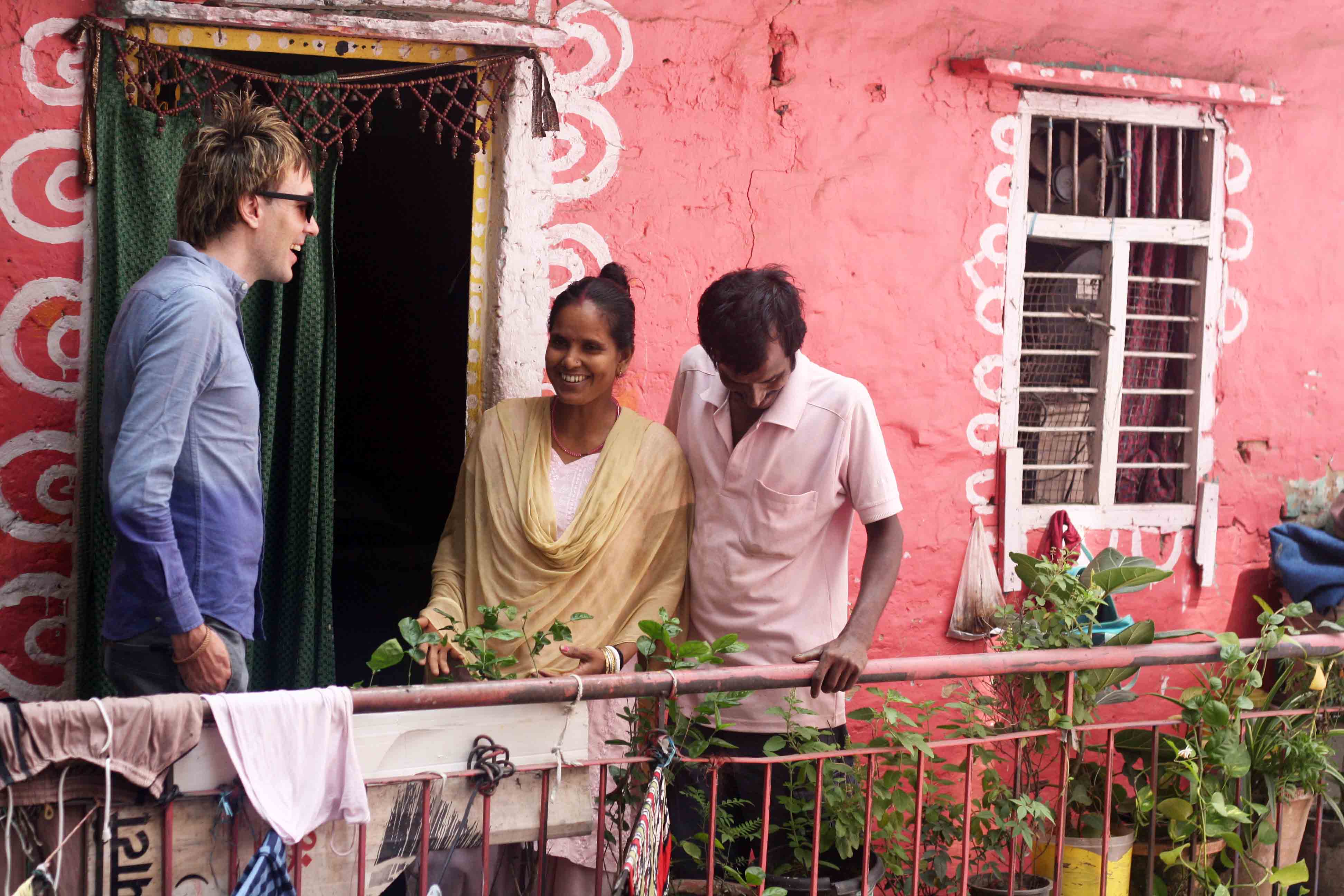 Hauz Khas Series – A House in the Village, Chapter 8

On a humid afternoon recently, Lal Pari, a vegetable vendor’s wife, unhurriedly walks down this tree-lined path to her village. Sometime later she is followed by Madan, a plumber’s teenage son. Next, Madhav, a carpenter, is seen.

A few minutes later appears Steven Baker, an academic manager at the British Council. The Hindi-speaking English man, who has been living on and off in Hauz Khas Village for 10 years, says, “Only a very few local people know about this path. Earlier it was jungle, then it became a rough mud track, and just a month ago it was paved with these grey concrete tiles.” Indicating the green iron-gates at the entrance, Mr Baker says, “Most visitors see these gates and assume that the path only leads to the Rose Garden and not to the village.”

But this pathway goes directly to the residential area of the village, completely bypassing the archetypical Hauz Khas Village experience of barricade pedants, pedestrian traffic jams and camera-clicking flâneurs.

Unlike the main street’s neon lights, shot bars and skull-masked flier-handouters, the route takes you past a Balmiki community and their newly renovated temple. Leaving this area that has traditionally been home to the village’s scheduled caste, the path emerges just behind the New York Slice pizzeria and the Yeti restaurant, beyond which lies the Tughlaq-era monuments.

Being a former tenant in Defence Colony, he observes that what are deemed to be posh colonies in Delhi are always neighbored by a low-income colony — in Defence Colony’s case, Kotla Mubarakpur, peopled with the drivers, maids, and guards employed in the bungalows across the road. “What’s so interesting about living in HKV is the lack of such marked segregation,” says Mr Baker, “with a cheek-by-jowl arrangement of houses up to one lakh rupees a month next to one-roomed places on rent for about 3,000 rupees.”

Having finished work for the day, Mr Baker’s maid Bulbul Das leaves for home, which is a 1-2 minute walk away. Her daily commute meanders through a trendy graffiti-walled lane. Kids in Being Human vests play outside blue-walled one-room-sets inside which women make chapatis on the floor.

Brightly painted in orange, Ms Das’s dwelling that she shares with her vegetable vendor husband Biren and two daughters is accessed by a flight of iron stairs, next to a small mosque. Originally from West Bengal, Ms Das has lived in Delhi for 12 years. “There’s not much difference between my billage (sic) near Kolkata and our place here,” she says, “except here it’s a lot more costly.”

Ms Das, who has worked for a number of Europeans in the village, reminiscences about going out for lunch with one of her foreign employers at an expensive restaurant, which she would not otherwise have chosen to spend money at.

Built around the courtyard, next door to the Dases, is a two-storey compound of approximately 15 rooms and a couple of goats. Checked lungis and Lux Cozy underwears are strung across clotheslines. Here press-wallas, painters and daily wage labourers rent single rooms that can be obtained for around 2,700 rupees a month. The residents have cooking facilities, radio, TV and satellite. The one drawback is that the nearest toilet is a short walk into an adjacent field carrying a much-used Bisleri bottle.

In the 1970s and 80s, a similar courtyard dwelling existed in a building in the village’s commercial hub, which later housed Powerhouse gym and is now home to a conveyor belt of ever revolving eateries.

And the gentrification of Hauz Khas Village is still ongoing.

Pass the 3,500 – 8,000 rupees a night Rose Hotel, go beyond the similarly-priced monument-facing Airbnb apartment, and you will arrive at the house of RDS.

RDS, or Ram Deep Singh to give his full name, lives in the very last dwelling of the village, a short walk across a dusty expanse. Four families have constructed single story lean-tos against the Tughlaq-era mausoleum. One resident, a coconut water seller, is easy to locate from the empty half-shells outside his place. Showing off his clipped-winged white pigeon, in front of an assortment of soft drink crates, petrol cannisters and folding charpoys, RDS says, “They are planning to extend the road and walls of the village to where we are.”

RDS, who looks around 16, says, “There’s nothing more beyond this except a qabristan,” referring to a Muslim graveyard hidden in the forest ahead.

The original village was made of four communities – the Gochhwals who have made their money renting out their lake-facing property at a premium; the Balmikis who traditionally worked as sweepers; the Muslims in the backlands who were farmers; and an erstwhile community of mochis (cobblers) who lived just outside the village and later rehoused 40 years ago to make way for what is now the Deer Park.

At one period of time four wells existed for each of these groups. Though adults would only draw water from their assigned source, the children of all communities would happily play around any of the wells.

Such was the childhood of Ms Leelavati, the 70-year-old matriarch of the village’s Balmiki community. “I’m known as the village’s daughter,” she says. “The rest of the girls who grew up with me married and left. I too settled at my late husband’s native place in Haryana but there was no work and so my father called us both back.”

Sitting through one of the many powercuts that only trouble those villagers without an inverter, Ms Leelavati adds, “Earlier there was no electricity. But we had wooden poles. Every evening a man would come to light the kerosene lamps on these pillars, and he would return the next morning to put them out.”

Over chilled beer at his five-storey palatial residence, the avuncular Mangey Ram Gochhwal says, “The Balmikis would sometimes visit us Gochhwals. They would sit at some distance in our courtyards, bringing their own hukkas. Today, we all sit together.”

Patting his dog Scatty, Mr Gochhwal sees a time not so far into the future when the days of 2000-3000 rupee a month rooms can no longer be found. “Many such places are only still in existence because of long running property disputes in the courts.”

A concern of many of Hauz Khas Village’s residents and one that is shared by Mr Gochhwal is the traffic. The only motorable road leading from Aurobindo Marg can be blocked bumper-to-bumper for a couple of kilometers, and more on weekends. Even on a weekday night when it is kicking out time, the congested main street rivals the kumbh mela.

However, on noisy Saturday nights when it seems like half of south Delhi, at least, has descended on cool HKV, the newly-paved lane that only a very few local people know remains quiet.