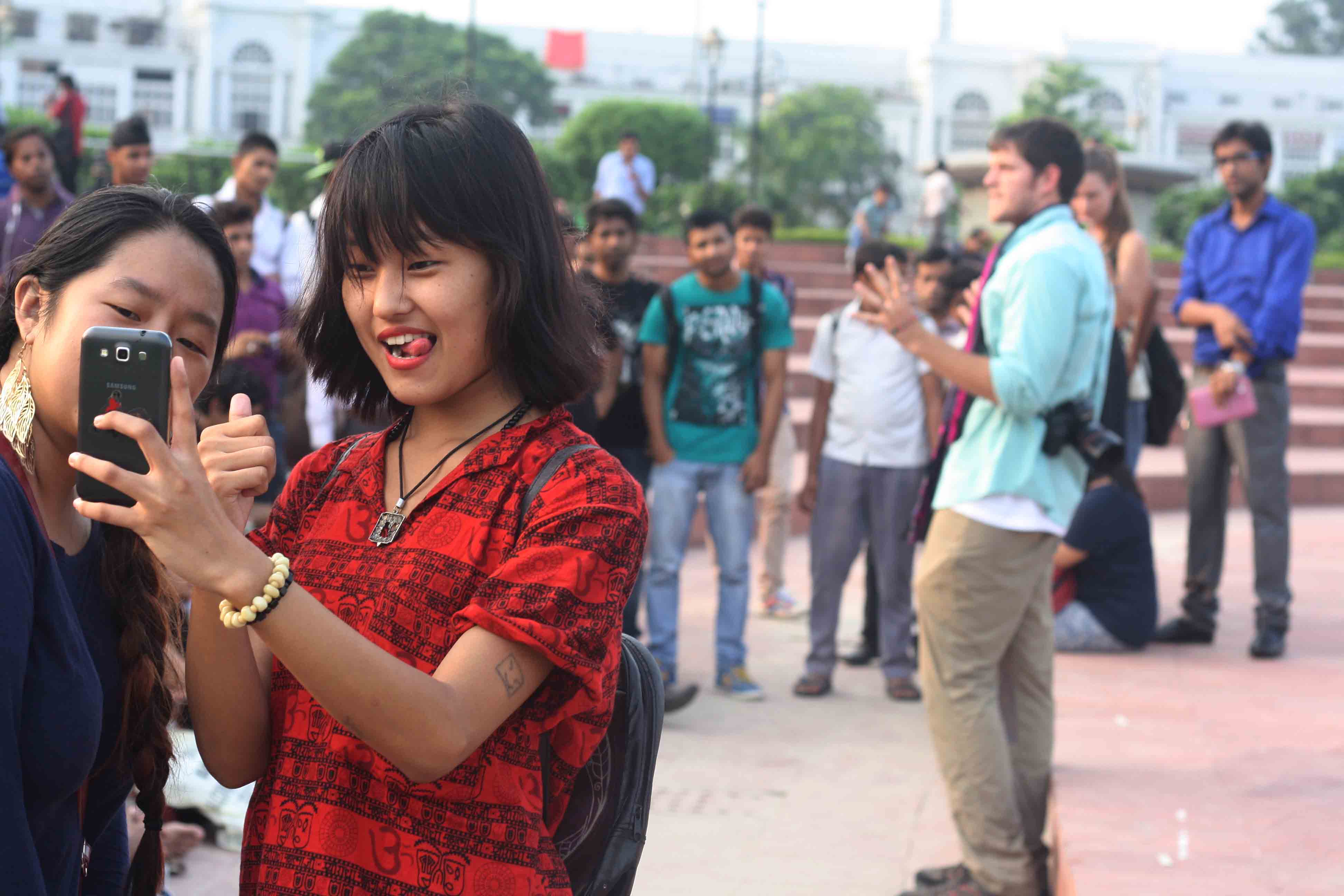 At about 4 pm on September 12, 2014, a photographer called Brandon Stanton posted a line on his Facebook page, saying, “For those of you in Delhi who want to say hello, I’ll be in Central Park, Connaught Place at 6 pm.”

Half an hour later, Central Park started filling up with an unusually large number of camera-toting people. But it retained its usual quietness, sticking to its character as one of those rare places in New Delhi where people hardly ever shout.

By 5 pm, more such people trooped in.

Half an hour later, a humming sound drifted along the evening air — as if there was a drone overhead. The sound actually came from humans.

The idlers in the park stared blankly at the commotion; they had perhaps never experienced the New York state of mind. That’s why they didn’t care for Mr Stanton; most likely they had also never heard of his hugely famous blog, Humans of New York, in which he shares pictures of the ordinary people he meets on that city’s streets.

And now this handsome New Yorker, used to strolling under the shadow of the Empire State Building, was strolling against the backdrop of Statesman House.

Currently on a world trip, Mr Stanton, according to a New York Times report, is “documenting street life near dangerous areas and war zones around the world on a 50-day United Nations-sponsored tour”. New Delhi happily seems to share the honour of hosting Mr Stanton with strife-torn places such as Erbil in Iraq. He has already touched base in Ukraine, South Sudan, The Republic of Congo and Uganda, among others.

Mr Stanton says on his website that the goal of this trip is to raise awareness about the need to eradicate extreme poverty and hunger, achieving universal primary education, improving maternal health and a few other “development goals that every member state of the UN agreed we should accomplish by the year 2015”.

But the only goal that New Delhi aspired to was a selfie with Mr Stanton. After obliging the crowd for 10 minutes, Mr Stanton shouted, “Guys, sit down, seriously!”

Everyone sat down instantly on the steps of the amphitheatre.

The globetrotting New York-based photographer was ready to take questions. One wide-eyed face asked, “When did you realize you have become a big thing?”

Mr Stanton did respond but his voice was lost in the shrieks and applause. All that could be heard in bits and pieces were inspiring words of wisdom. One bit of advice: “Read a new language daily.” Another: “If you have an idea, just go and start working on it.” At every little inaudible attempt Mr Stanton made vis-a-vis humour, the crowd went hysterical. The quieter ones were quiet only because they seemed almost in a trance. Their eyes barely blinked, their lips were frozen in a profound smile, as if at long last they were receiving enlightenment.

Meanwhile, more people were streaming in. Many were running down the grassy slopes, shouting, “He’s there!”. One girl carrying a Starbucks coffee mug (with Cinderella scrawled on it), shouted, “Oh my God, Oh my God!”

Some members of the audience had dressed for the occasion hoping Mr Stanton would find them anthropologically attractive enough to take their photograph and post it on his blog. One smooth-faced man was in a white gold-bordered silk mundu and a red kurta.

In between Mr Stanton took a break and lay down on the ground, letting fans take photographs of him. The crowd went even more wild. One girl hugged her neighbour and started crying.

Mr Stanton again started speaking. Again, the crowd shrieked and laughed. While many were waving cameras and mobile phones towards Mr Stanton, one girl, her nails painted green, tirelessly kept on waving a copy of Humans Of New York, Mr Stanton’s book, which has stayed for more than 20 weeks on The New York Times list of non-fiction best-sellers.

Mr Stanton was still barely audible. When he said, “It’s all about the energy you give,” a girl with the word Khuda tattooed on her back in English nodded enthusiastically.

One girl, shoving her way through the crowd, continued intoning, “I cannot see. I cannot see.”

In the outer regions of the crowd, a woman in a sari was standing on her toes to see the New Yorker, but couldn’t. She returned each time to the papad she was munching.

After a point, the noise became so loud that it was pointless for Mr Stanton to speak. Many attendees didn’t know what was happening. One man asked a photographer if he knew the “white man”. Perhaps too excited to make any conversation, the latter walked away. The ignorant man too started shrieking.

The crowd started yelling, “No, no, no.”

The policemen said something to Mr Stanton, but nothing could be heard. Mr Stanton started leaving. The rumour spread that he would now take photographs. A fresh wave of shrieking commenced. Everyone started following Mr Stanton. He could no longer be seen. The large circle, presumably around him, moved along the park.

Mr Stanton exited the park, but the crowd continued to follow him. Traffic came to a standstill. Shoppers came out of Connaught Place’s showrooms. The crowd grew in size. There was more shrieking. The Delhi Walla was pushed back but one sombre man said Mr Stanton had got into a car. “He has run away,” he said.

An hour later came Mr Stanton’s new post on his Facebook page: “Thanks to all of you who came to the meet-up in Delhi. It went about as well as a spontaneous meet-up could possibly go. Amazingly, we were able to have a pretty organized, calm speech. Until the very end, of course, when we ran from the police. Coolest part for me was when the police were looking for someone to blame for the crowd, and asked: ‘Who is he with?’ And everyone screamed in unison: ‘All of us!’”

The New York state of mind