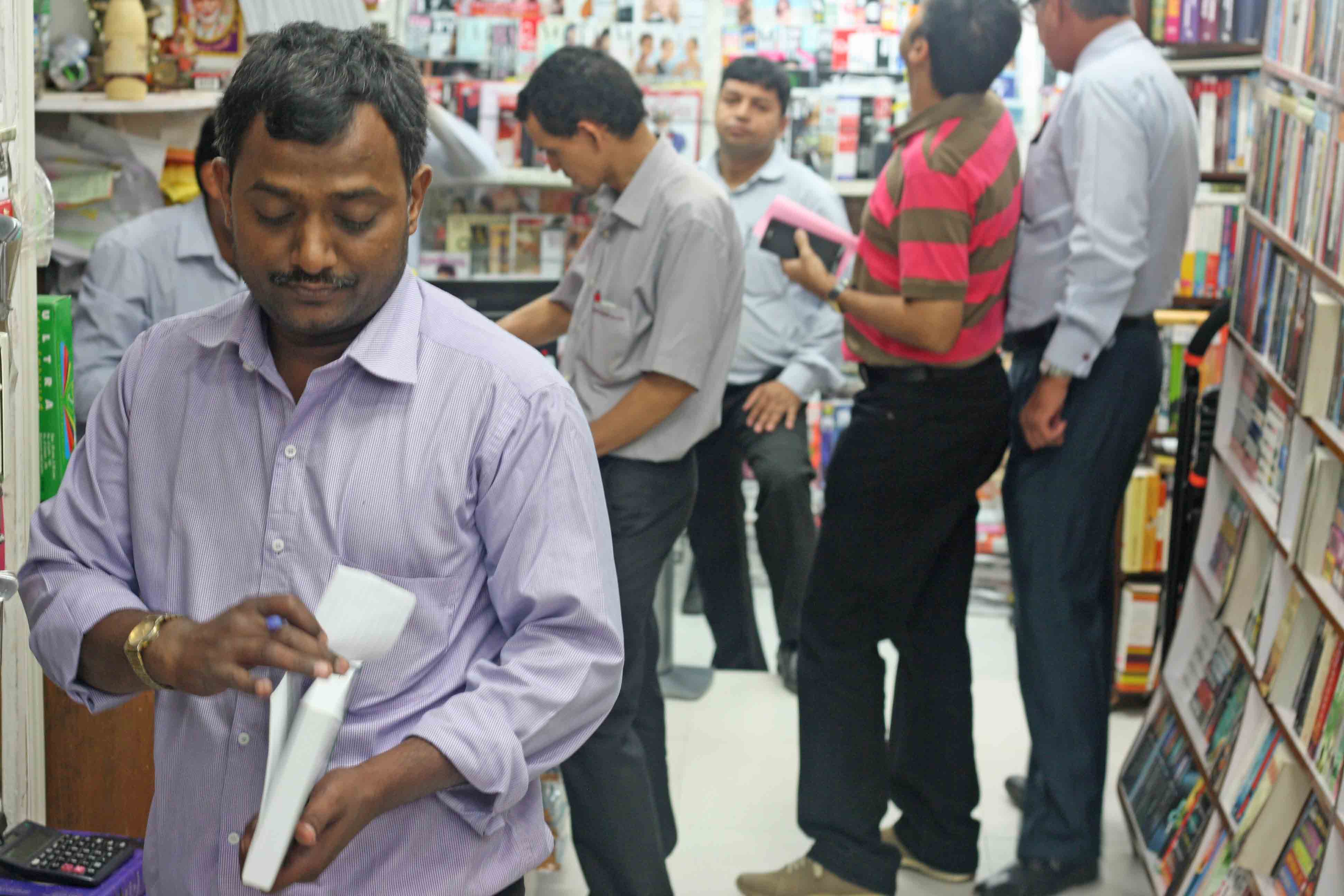 He has hardly any books in his house but he is known to many Delhiwallas who live in book-lined homes.

Mithilesh Singh, a 39-year-old college dropout from Bihar, is the floor manager at Bahrisons Booksellers in Delhi’s Khan Market. The landmark book store is patronized by the Capital’s famous people, and all of them turn to Mr Singh on literary matters.

“Mithilesh is a genius,” says author William Dalrymple. “I love the way he knows about any book I ask for and can generally find it in seconds even if it involves shinning up some rickety stepladder or rootling around in some attic. If not, he knows where he can get it within 24 hours. If all bookshopwallahs were like him, then Amazon and Flipkart would never have got a toe in the market.”

The cut-and-dried procedure of buying a novel from an e-tailer cannot rival the poetic pleasure in confronting thousands of books in a brick-and-mortar store. The joy is deeper when the book store owner gives you a smile of recognition. But to have an affable bookshop attendant more informed than you on new titles and who helps you search for the desired authors is beyond expectation.

That is exactly how Mr Singh delights book lovers every day.

The moment politician-lawyer Kapil Sibal, one of the store’s many VIP regulars, pushes open the glass door, he asks for “Mithilesh” to show him the latest stock. It’s the same with many others who are in a hurry and want to browse only those recent releases that suit their reading taste. The most commonly uttered name in the store is not “Rushdie” or “Rowling”, but “Mithilesh”.

Mr Singh is favoured in the virtual world, too. A comment on the current-affairs blog TheSouthAsianIdea advises that a particular Pakistani writer’s books “may be ordered through Bahri Sons in Delhi’s Khan market (ask for Mithilesh)”.

Mr Singh has been immortalized in at least one hardback. In the acknowledgment of his 2013 book Healer: Dr Prathap Chandra Reddy And the Transformation Of India, New York-based biographer and journalist Pranay Gupte thanked, among others, “Mithilesh Singh of the fabled bookstore in Khan Market, Bahrisons.”

Delhi has had more than one bookshop with such cherished staffers. Some of these independently owned establishments have downed their shutters because of losses. The Bookworm in Connaught Place is missed not only for its spiral staircase but also for its generous-hearted manager Shalini Rose. Apart from talking about dogs, jobs, and movies with regular customers, she would lend books to them on credit, and never remind them of the dues (she moved to London after the shop closed in 2008).

The now-closed Crossword in South Extension was a corporate-style chain store but had the romance of a quirky bookshop because of its attendants. Sridhar, a classical music devotee, talked for hours on German composer Richard Wagner; and Anand Rawat, son of a senior politician, expounded on black American novelists like Toni Morrison and James Baldwin.

The grave-looking owner of the eclectic Fact & Fiction book store in Basant Lok market is rarely seen smiling but his assistant Ravi Vyshumpayan’s relaxed demeanour puts one at ease.

Full Circle at Khan Market has the friendly Reji Varghese Joseph (he was trained in Bahrisons) as well as the elderly Jolly Sabharwal, who pleasantly surprised the regulars after returning to her job in July after a five-year break (she appears stern but is charming once you break the ice).

The Book Shop in Jor Bagh suffered a tragedy in May 2014 with the death of its founder, K.D. Singh, who used to regale the faithful with stories of his college days in Delhi. The regulars continue to visit the shop not only to bask in the soothing company of K.D. Singh’s wife Nini, but also because of the obliging Sohan Singh, the quiet-natured doorman-cum-attendant.

Early in 2014, on his store’s Facebook page, K.D. Singh left a sentimental note, saying, “Sohan Singh has been with The Bookshop for fifteen years. He knows where every. single. book. is shelved. And even though he can’t read in English if you are a regular customer he knows the kind of books you like and is happy to point you to books that you might enjoy. He is such an integral part of The Bookshop… ” — just as Mithilesh Singh is to Bahrisons.

One of the reasons for Mr Singh’s prominence is the place where he works. Founded by a Partition refugee, Bahrisons Booksellers stands at the main entrance of a high-value shopping destination, attracting the city’s elite who have much to choose from its shelves. Sorting through this collection provides the starting point of their relationship with Mr Singh — he has a knack for instantly gauging readers’ preferences, and proactively introduces them to authors they would enjoy reading.

“If you love Vikram Seth, I’ll show you Neel Mukherjee’s The Lives Of Others,” says Mr Singh, his eyes shining up with excitement. “If you are a Ravinder Singh fan, you may need Durjoy Datta’s When Only Love Remains.”

It is difficult for regulars to keep secrets from Mr Singh.

Hailing from a landowning zamindar family that lost its fortune down the generations, Mr Singh began his career in Delhi as a delivery boy in the publishing firm of Ravi Sabharwal, who runs the Zen-like Timeless Art Book Studio in Kotla Mubarakpur, which has a double bed as its furnishing (his earlier shop was in Connaught Place).

Following months of pedalling across the city, carrying books on his bicycle carrier, Mr Singh, “frustrated of being a peon”, started at Bahrisons in 1996 after being interviewed on “John Grisham’s latest title”. With eyes filled with tears, he says, “On my first day here, I was handed over a pen and told that I would also have to sign receipts. I was so happy to finally get a white-collar job. I plunged into my work, poring over publishers’ catalogues, listening to customers talking among themselves in order to know what they wanted. I started to speak in English, even though my accent would make people smile. Every night, I would study a few new words in the dictionary and work on my pronunciation.”

The whole-hearted effort paid off handsomely.

Having begun at the bookshop at a monthly salary of 1,800 rupees, Mr Singh says his pay was increased in quick intervals. Today, his pay-cheque is respectable enough to support his wife and two children in west Delhi’s Lajwanti Garden, from where he daily commutes to Khan Market on his bike, given to him by his employers.

Mr Singh would perhaps have been a success in any field, but it helped that he landed up at Bahrisons, a rare book store that nurtures its staff of more than a dozen people. While the owner Anuj Bahri Malhotra sits upstairs in the cookbooks section, taking care of his many duties — he is also a publisher and a literary agent — the daily running is left to Mr Singh and his sprightly colleagues.

Rajesh Kumar Dhamija manages the magazine counter with Shakir Ahmed; Dhanpal Rawat packs overseas parcels; Babita Kumari controls the cash desk; Devender Bisht is being trained to become another Mithilesh; doorman Reet Bahadur Simkhada is the first person in the shop to be greeted by every regular — sometimes you see him lost in some Hindi-language paperback.

“As long as my father was active in the shop,” says Mr Malhotra, referring to the store’s elderly founder who retired five years ago, “I used to do exactly what Mithilesh does today. He exercises the same freedom of decision-making.” Shooting a glance at his star staffer, Mr Malhotra says, “Both of us have been loyal to each other and both of us respect each other’s position.”

What if Mr Singh quits?

“Lots of people have tried to take him, but failed,” says Mr Malhotra. “If one day he leaves us, it’ll be too bad.”

[This is the 91st portrait of Mission Delhi project]

3a (Mr Singh on phone downstairs)