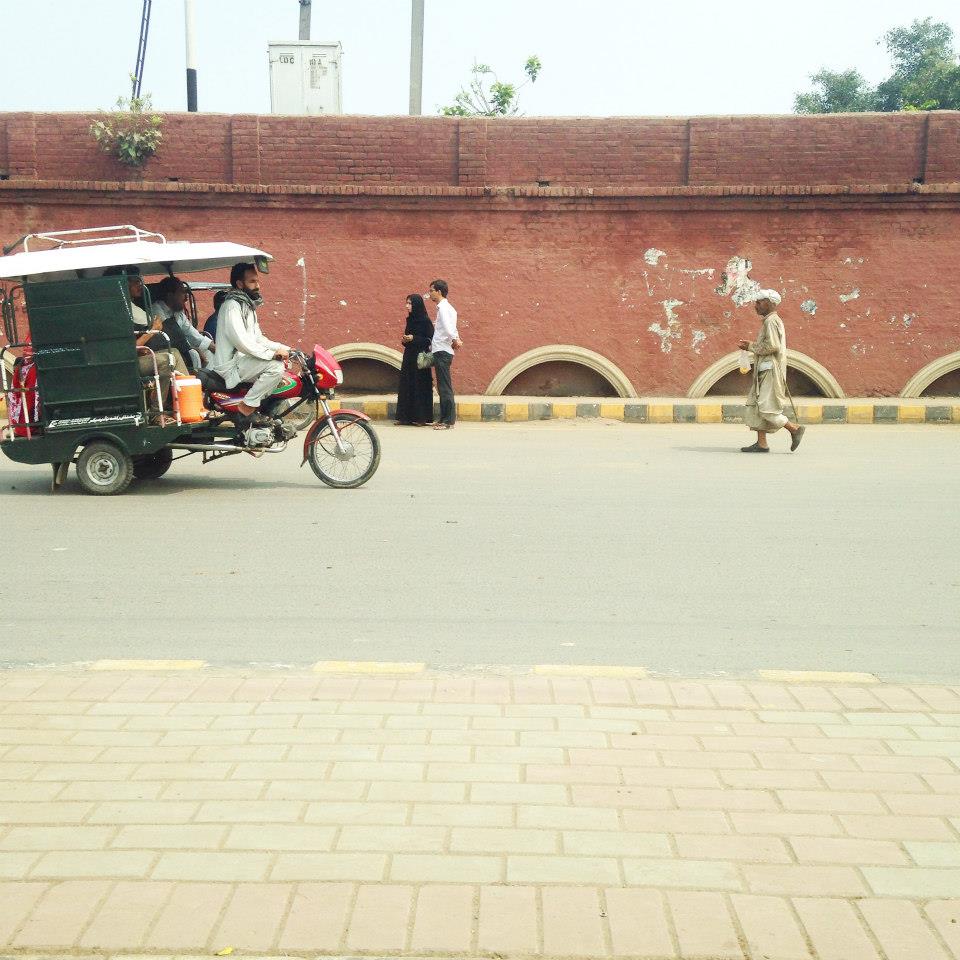 An Indian in a post-Partition world.

[Text and photos by Aanchal Malhotra]

Lahore was wild today. The sky had suddenly turned dark and it felt like late evening though it was barely noon. Rain poured hard against my window pane. But before the unexpected arrival of the clouds my morning had been spent exploring the beautiful Wazir Khan Mosque with a friend. We parked our car outside the Dilli Darwaza and walked through the grand gateway that pointed to my beloved city of Delhi.

The glorious sunshine of the subcontinent poured over us. As we walked to the mosque a strange feeling of déjà vu possessed me, like I’d been down these lanes before, the narrow uneven roads and dusty path. But though I hadn’t, they welcomed me all the same as if I were an old friend. The classically carved wooden jharokas of the old city wished me a good morning and the splendidly painted tiles of the mosque’s entrance invited me in.

When I explored my feelings of familiarity with the old city, what struck me most was that for the brief two weeks of my visit to Pakistan, Lahore had embedded itself into the place in my heart that was typically occupied by Delhi. This happened so suddenly that I almost didn’t even feel it. But it was only when I began to remember the streets and smells of Delhi, that I realized I didn’t miss it as much. In some ways, I was already in it.

I didn’t feel the same homesickness that I felt the majority of the year being away at university. On the contrary, I felt completely as though I knew this city, I understood it, I could speak to it. Its streets were alive with the same history that the streets of Delhi were, its monuments boasted of the same civilizations, its government buildings and old bazaars structurally felt the same. Strange as it was to think this way, it felt like an appropriate homecoming to a place I’d never been before.

I say this for a number of reasons. I have often wondered if it is possible to really know a place – a city, a country, a home – before one has even been there. Whether it is possible to really understand it, relate to it, all through stories and anecdotes. I have wondered whether one can feel its spirit only through narrated memories. I would have to say it is indeed possible to have unraveled the essence of it, as becoming physically acquainted with Lahore proved.

I was born in Delhi. I lived there my whole life until I moved to Canada for university eight years ago, which is where I really fell in love with Delhi. Through my memories, I explored its history, its culture, the colour of its sun, the crowds on its streets and the vibrancy of its life. In my recollections, I found solace, and in that distance from the city of my birth, I cultivated a relationship with it.

Paralleling this, my grandparents did the same with their respective cities of birth. I can trace their histories to Pakistan – from the North-West Frontier to Lahore to Malakwal. Pakistan is their land. It is their soil, their childhood, their families and their earliest memories. Pakistan is all of that. A powerful bond develops with the place where one is born and no matter where you live in life or what you become, no matter what passport you hold or what accent you acquire, that place never leaves you. It finds a way to seep deep into your heart and remain there. You must never forget the place where you came from, my dadi always says, because a part of that soil stays with you forever.

For the past year now, I have immersed myself in their stories and memories of Pakistan. I have come to revel in conversations that begin with, ‘Pakistan ki mitti’ or ‘humaare Pakistan mein…’ because these are the small, minute details of my grandparents’ childhoods, these are the banalities with which their ancestral homes were constructed.

On hearing their stories, hearing them speak so lovingly about the country of their birth, my heart would be filled with joy. I would feel a kind of proxy-belonging to the country, as though I too, had a right to discover it. I could see the streets when they described them, I could feel the taste of the fruits that grew around their house, and I could hear the laughter of their siblings as they ran through the fields of their villages.

It came then, as no surprise that I was so at ease when I finally visited Pakistan. What had I been expecting?

To be completely honest, a place not much different than India, or at least Delhi. I had read somewhere once that Lahore and Delhi were twin cities of the subcontinent. I feel now that this label should be made official, as the two cities are near identical. The Mall Road of Lahore is reminiscent in places of Lodhi Road in Delhi; the Badshahi Mosque, a similar yet grander version of the Jama Masjid; the Lahore Fort restored beautifully to match its likeness in Delhi’s Red Fort; Anarkali bazaar is easily comparable to Chandni Chowk and the maze of alleyways of the walled city of Lahore are almost undistinguishable from those of Shahjahanabad, the walled city in Delhi. Apart from that, one can find many Delhiites in Lahore and many, many Lahoris in Delhi.

So as I sat by the window and stared out at the rain falling on the lush green lawns of the Lahore Gymkhana, I contemplated on my experience in Pakistan. It was my thesis research that brought me here, ‘Remnants of a Separation’ — a project that is attempting to narrate the history of the Partition of India through its material remains. A project that allowed me to search for the possessions people took with them when they left their homes on either side of the border.

It was a project that studied the division of Hindustan into India, Pakistan and Bangladesh through the objects that survived the test of time. It also explored the people of the subcontinent, their preoccupations, their perception of this historic event and the consequences of it on their lives. It was a project that allowed me to work closely with a wonderful and niche organization called ‘The Citizens Archive of Pakistan’ that dealt with the recording of oral traditions, histories, memories and experiences of Pakistanis.

I had not once, during the course of these research interviews with various people, felt out of place. It was quite the contrary, actually. I felt welcome and the hospitality of Lahoris warmed me. No matter what part of the city I was in, from Misri Shah to Defence, the generosity of the people was unparalleled. I had gotten used to it, this temporarily lifestyle in Pakistan.

Somehow, all of the banalities of Pakistani life made me feel closer to my grandparents. Travelling back to their roots made me even more aware of my own. Visiting the twin city across the border made me dream endlessly of Delhi. So much so, that I tried to determine the differences between the common people of India and Pakistan from what I’d seen so far.

I compared myself to the young women my age living in Lahore. We looked the same – wheatish skin and dark hair, we dressed the same – modest shalwar kameez and dupatta, we ate the same kind of food and spoke practically the same language. Try as I might, barring religion, I could see no significant difference between us.

Amidst the consequences of this event, the unusual tale of two twin cities continues, separated from each other, yet almost indistinguishably similar.

[The author-photographer of this article divides her time between Montreal and Delhi. Click here to see her website]

A part of the soil (Photos by Aanchal Malhotra)

1. (Inside the Lahore Museum)

7. (The courtyard to the zenana- Lahore Fort)

8. (The road to Wazir Khan Mosque)

9. (The wall of the zenana- Lahore Fort)

10. (Windows of the Lahore Gymkahana)