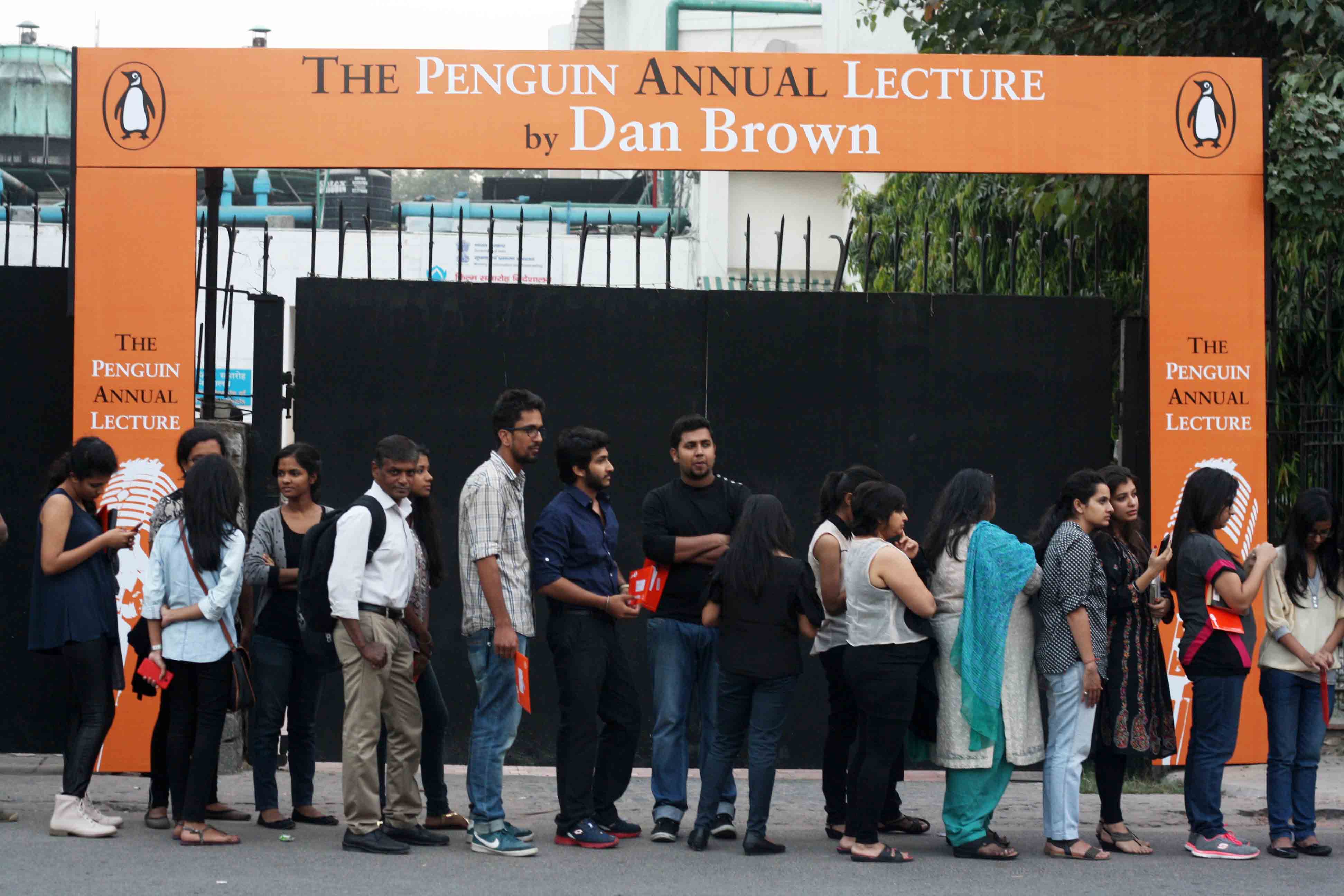 Sharp at 7.05 pm 10 November 2014, renowned writer Dan Brown staggered into south Delhi’s Siri Fort Auditorium with the swagger of a man whose six novels are circulating across the world in 52 languages and 200 million print copies.

As he had probably anticipated, a large collection of his mostly college-going fans filled the hall, which has a capacity of more than a thousand people.

But this crowd (with due to respect to designer Ritu Kumar who was enthroned on the first row) must have barely impressed Mr Brown. After all, he was fresh from a talk last week in a Persian gulf state where his audience included Sheikh Dr. Sultan bin Mohammed bin Saqr bin Khalid bin Sultan bin Saqr bin Rashid Al Qasimi, Sharjah’s His Highness himself.

Mr Brown was in Delhi to speak at the eighth Penguin Annual Lecture, an event that in its brief history has offered us “finest minds” of our times such as Amitabh Bachchan (actor), APJ Kalam (former president) and Chris Patten (Google him).

Mr Brown describes himself on his own website as “the author of numerous #1 bestselling novels, including The Da Vinci Code, which has become one of the bestselling novels of all time as well as the subject of intellectual debate among readers and scholars.”

The topic of discussion was ‘Codes, Science and Religion’. The moderator was celebrity journalist Rajdeep Sardesai who exhorted the crowd minutes before the American novelist stepped onto the stage to buy copies of his own new book, which he claimed was doing better than cricketer Sachin Tendulkar’s brand-new autobiography.

Now Mr Sardesai’s book will sell even more than Mr Brown’s. He shone in comparison.

Mr Brown’s performance was not all racy like his plots.

And then the descent began, though some parts of the audience continued clapping from time to time.

These were some of the profoundly original lines with which Mr Brown tried enchanting his fans:

“Where have we come from? What happens when we die? Why do we die?”

“All religions have the same basic truth.”

And this took the cake: “Love is better than hate.”

A female member in the audience whispered to her friend loudly enough for her whole row to hear: “A lot of people here who are crazy for him may not like to read him again.”

Meanwhile the wisdom continued to flow forth.

“Writing can be an isolated pursuit.”

“We are born to worship our parents’ Gods.”

“You are a trapped energy.”

By now, the man who was once lionised by Time magazine for keeping the publishing industry afloat, renewing interest in a 15th century Italian painter and spiking tourism to Paris and Rome had sensed that he had lost his humble Third World audience.

He did try to win us back. He talked of his best friend of his college days who happened to be Jai Chandrashekhar from Delhi. (Applause.) He even praised the greatness of Hinduism. (Applause again.)

Mr Sardesai later asked him if India and Hindusim would ever appear in his novels.

“But I would need to know so more about this place, its culture, its philosophy!” – he exclaimed.

“Have you read any of our epics?” – Mr Sardesai asked waving his hands.

The two big screens put up on either side of the stage showed him looking very uncomfortable.

“The problem with organized religions is that they establish themselves between men and God.”

The questions put up by the audience were embarrassing as usual although there were people who were clapping even to the most incomprehensible questions.

One woman asked Mr Brown whether we should interfere with the environment. He mumbled about clean water and over-population before boldly putting up a bizarrely existential question to everyone in the hall — “If you could kill half the world’s population to save mankind, could and should you do it?”

Finally, the evening’s only interesting question was raised.

“Sir, which novel inspired you to become a writer?” asked a young earnest looking woman.

After uttering the usual platitude about what a difficult thing it is to pick a favorite work, Mr Brown eventually answered, “Hardy Boys.”

That is a mystery series for teens manufactured by a number of ghost writers.

The evening ended with dozens of hardy-looking boys and girls rushing towards the stage to have their Da Vincis signed by Mr Brown. As if on cue, the author was surrounded by a ring of safari-suit-clad bouncers.

Next moment he had slipped out of the stage.

Dan’s fans waiting for the gates to open