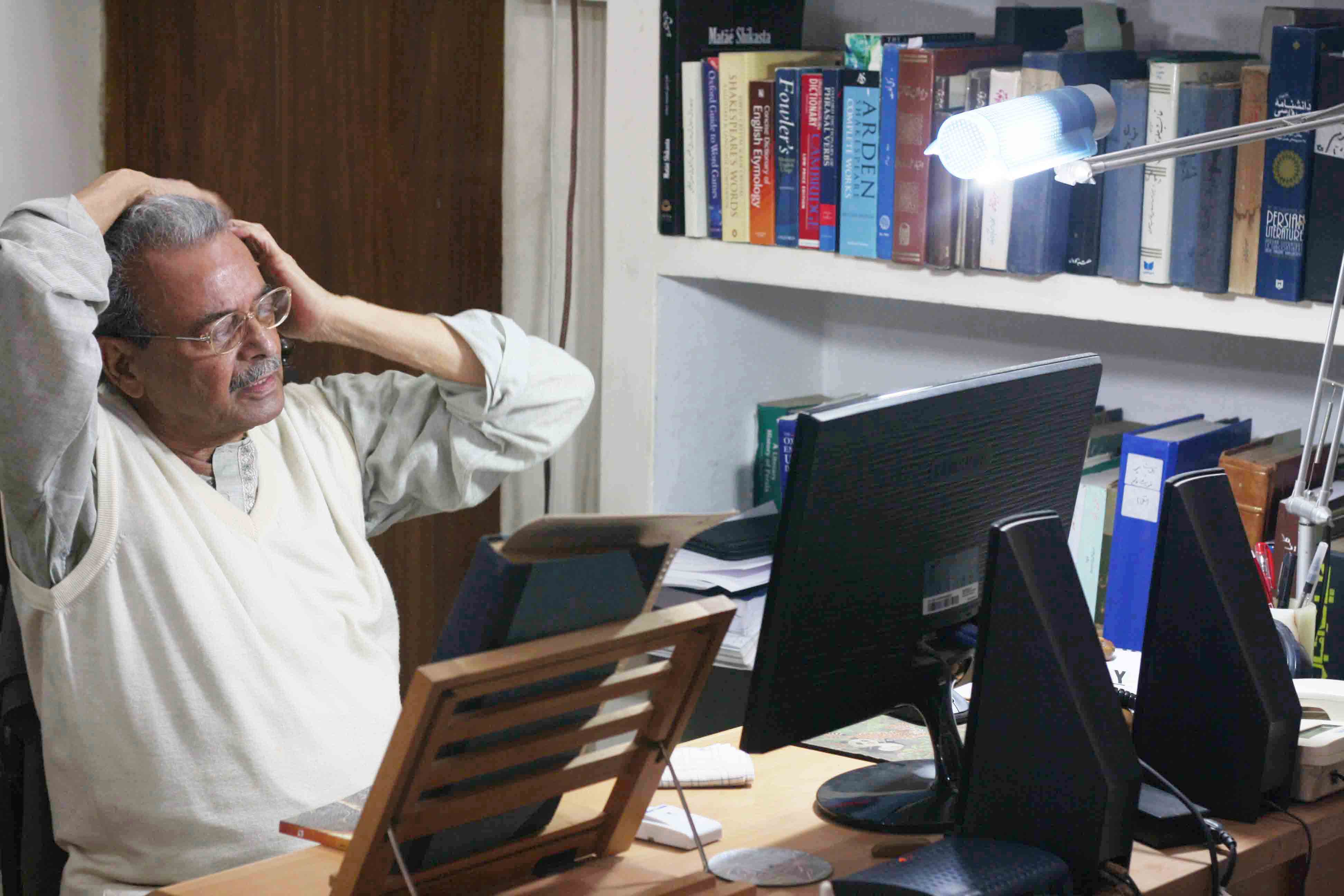 A Delhi writer in spirit.

One November noon, The Delhi Walla met Shamsur Rahman Faruqi at his bungalow in Hastings Road, Allahabad, a historically rich town 600 kilometers east of of our city. The 79-year-old Urdu writer recently returned from Delhi to launch The Sun That Rose From The Earth, his collection of novellas and a novel, that he himself translated from Urdu to English. He also underwent a series of medical checkups in the capital.

A retired officer of the Indian Postal Service, Mr Faruqi commands unchallenged reverence among literary-minded Delhiwallas. His last novel, The Mirror Of Beauty, was a weighty Mughal-era epic set largely in Delhi. His new book, containing fictionalized stories of great Urdu poets, is the latest in an oeuvre that includes a four-volume treatise on poet Mir Taqi Mir — that formidable work alone is enough for our author to be mummified as the melancholic chronicler of a vanished past.

But all fiction crumbled on meeting the man. Mr Faruqi isn’t even slightly melancholic — he jokes a lot and he is especially pally with his dogs – Mastana, Juhi and Bholi. He writes on his black Lenovo laptop and has a blue iPhone. He logs into his Gmail once in three days.

Mr Faruqi is also a superbly sophisticated snob. On being asked why he lives in Allahabad when he could easily settle in cosmopolitan Delhi, he said, “Delhi and Allahabad are almost alike. I’d prefer New York.”

And he has a history with Jane Austen. I chatted with him.

What’s the thing with Austen?

My first Jane Austen was Pride And Prejudice. It was the first English novel I read from cover to cover. I was 14. I remember not liking Darcy. He was a damn sexist.

At that time I was naturally more at home with Urdu. In educated Indo-Muslim households, it was common for children to be familiar with the poetry of Ghalib and Mir. In fact, the first novel that I read was when I was 8. It was called Shamim and was by a writer from Faizabad called Munshi Fayyaz Ali. It had romance and adventure and I had to read it secretly.

Shortly after reading Jane I encountered Thomas Hardy and fell in love with him. I read everything by him and about him that I could find in the small town of Gorakhpur where I grew up. I was also impressed by Samuel Butler’s The Way Of All Flesh, perhaps because it reflected the kind of conflict that I felt I had with my father.

A little later someone gave me a tattered copy of (William) Shakespeare’s complete works of which many last and first pages were lost. I read all of the rest over the summer vacation after my BA exams. Shakespeare changed the way I looked at literature and life.

I‘ve always been buying thrillers, spy stories and mysteries, because they are my main, and now only, source of recreation. Later, I aggressively began to collect dictionaries in Urdu, English and Persian. I felt that I must have as many dictionaries as I could, because words are the sharpest weapons that a writer could possess.

Numerous Urdu authors too send their books to me.

One kind of book I assiduously seek is collections — we call them divan, or if it’s the collected works of a poet, we call it kulliyat — of pre-modern Urdu and Persian poets.

One part of my collection I’m truly proud of consists of the 46 volumes of the Urdu oral romance, the Dastan-e Amir Hamza, that were printed by Munshi Nawal Kishore on his presses in Lucknow and Kanpur from 1888-1917. This is the longest and richest oral romance in any language and our fathers and grandfathers thought so little of it that it was allowed to sink into oblivion. The volumes are extremely rare now. I bought them vigorously wherever I could find them—pushing up the prices in the process — and I possess two or even more copies of some volumes. I think I am the only individual in the world to own the entire 46 volumes. A set exists in Columbia, and microfilms of the volumes exist in Chicago. But there is no institution, no individual elsewhere to have them under the same roof.

Both my daughters assure me that they will look after the library after I’m gone. Both are the studious type — professors.

Your wife shaped you as a writer.

Ours was not an arranged marriage. We had first met in Allahabad as college students. She was pursuing her master’s in English. In those days it was rare to find a middle-class Muslim woman in a university. Incidentally, Jamila’s sense of dressing was a kind of byword among the college-going women in Allahabad. She favoured short kurtas with the gharara style of pyjamas. Decades later, a distinguished woman poet in Hyderabad asked me about my wife. Referring to her maiden name, she said, “Does Miss Hashmi still dress so well?”

Of course, she did.

Jamila made me what I am. She did not mind my buying books and spending most of my time reading or writing. Though she once half-jokingly said, “I too could have become a writer like you but you left me to do our domestic chores.” But that wasn’t completely true, for she spent a large amount of time running a girls’ college.

What I cannot forget is that my wife wholeheartedly supported my (now defunct) magazine Shabkhoon, which provided a forum for me and others like me who felt stifled under the Progressives. Without Jamila, there would have been no Shabkhoon and without Shabkhoon my struggle to become a writer of my kind would never have ended.

You are harsh towards the Progressives.

To them, literature had to follow the forces of social change on the lines of the Marxists. Other ways of seeing was not to be considered literature. This became the standard doctrine of the Progressive writers in the 1950s and early 1960s, when the movement started losing steam. The Progressives did not encourage new authors to choose their own themes and attitudes to life. Writers like me, who came from outside the standard Urdu literary establishment, began to challenge the hegemony of the Progressives and my magazine became the flag bearer of that challenge.

What’s good about living in Allahabad?

Given a choice, I would live in a faraway place, comfortable, reasonably well supplied with books, unpolluted by the clotted traffic and urban noises. I chose Allahabad because my base was there. Most of my books are there, so is the house that Jamila persuaded me to design and build in 1970. Allahabad is also home to Jamila’s legacy — two schools for girls from the poorer sections of the people that she founded and managed. I’m the manager now.

You come across as a writer who lives in the past.

It’s simplistic to describe me so. My fiction is indeed located in the cultural and literary past of the Indo-Muslim way of life of the 18th and 19th centuries but I don’t regard it as a dead past. And I am not writing historical fiction. I am writing about poetry, love, death, what it meant to be a poet, or a lover, or an Indian at that time. It was a very rich and significant period of our history but it has been allowed to lapse from our memory. It barely exists for even the so-called experts of Urdu literary and cultural history. Lacking a true sense of the past, we cannot really understand and evaluate our present, culturally or literarily. We need to go back there, not as supercilious, incurious foreigners, nor as time-travellers, but as homecomers.

Have you been to the West?

My travels to Europe made me acutely conscious of my colonial past and that much of the richness there was because of me, because of India. But I can happily settle in New York. I have lived there for considerable lengths of time, spending my days in its libraries, museums, and theatres.

When are you visiting Delhi again?