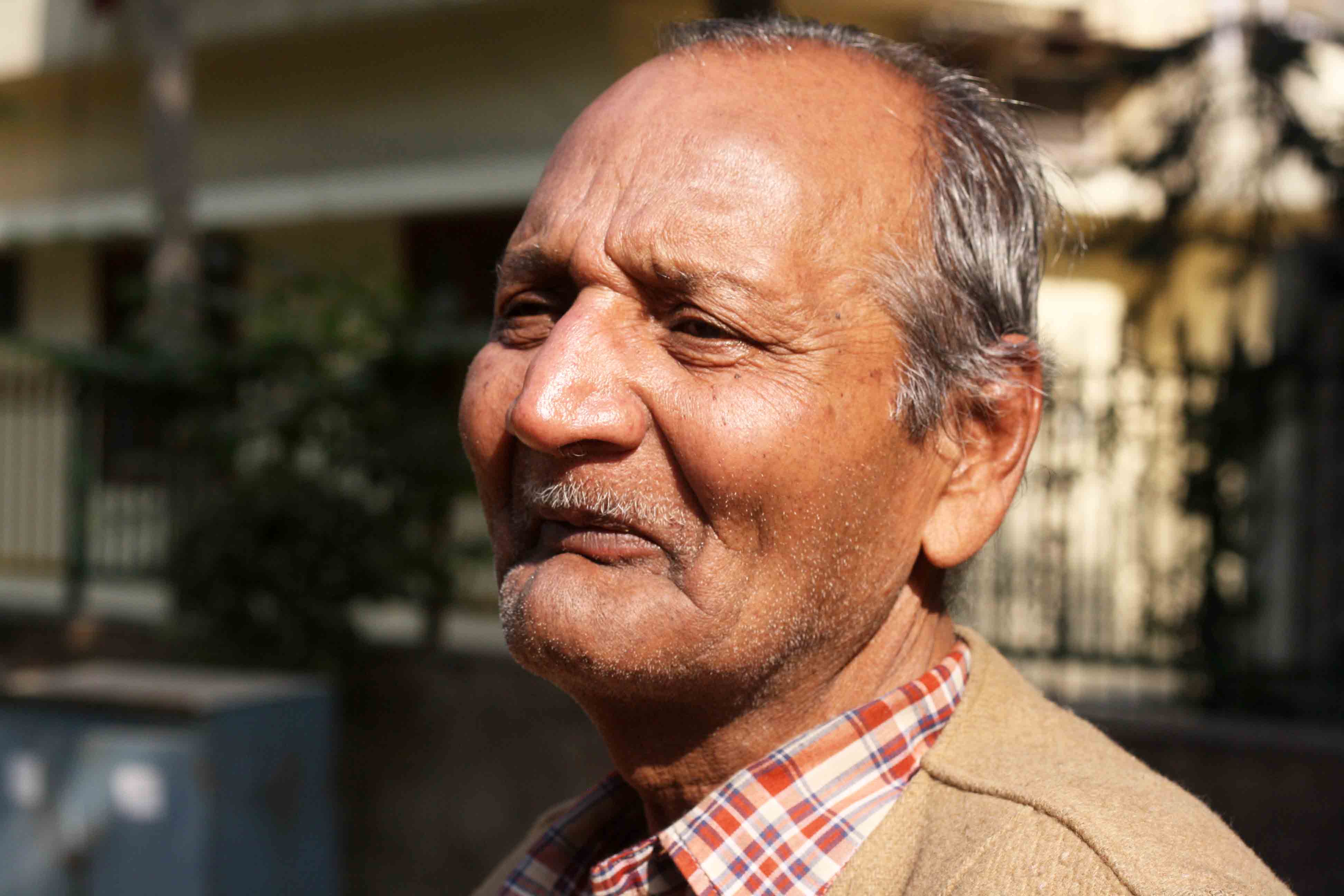 Heaps of musty newspapers are piled up everywhere. Even the sofa has not been spared.

As Ronald Vivian Smith digs out his typewriter from under a stack of files, his wife, Alvina, enters the drawing room of their sparsely furnished flat at Vatika Apartments in west Delhi’s Mayapuri. “Look at the condition of our house,” she says. “Once, famous people frequented us at Christmas. But he never used his connections to get our children admitted to English-medium schools. He never asked his rich friends to get nice jobs for our sons. What’s the point of being a writer?”

After her exit, Mr Smith, 76, says: “Alvina tells that to everyone who comes to see me. I find it embarrassing but leave it to the visitor to make his judgement.”

Writers tend to be a disappointment to their families. The only material advantage the paan-chewing Mr Smith seems to have gained from his profession is his MIG (middle-income group) apartment, allotted through the journalists’ quota in the 1970s. A long-time columnist of The Statesman and The Hindu, he was a reporter at the first newspaper for more than 30 years.

Once known as a Casanova, Mr Smith now talks at a snail’s pace, his tired eyes staring at some distant point that only he seems to see. Most visitors simply boggle at the pile of old newspapers, containing the thousands of offbeat stories he has written on Delhi, in his drawing room.

His first story, he says, was on a painting he saw hanging inside St James’ Church in Kashmere Gate.

Mr Smith’s memory fails him when he tries listing his books. “The Delhi That No-One Knows,” he says in his low voice, “Tales The Monuments Tell; Capital Vignettes…. The other books are slipping from my mind….” Never mind. In December 2014, Mr Smith quietly released a new book.

Delhi Rambles: Quaint Cityscape Through A Roving Eye is a collection of Mr Smith’s recent newspaper columns. In the foreword, author Pran Nevile wonders if Mr Smith has been “inspired by the Muraqqa-e-Delhi by Dargah Quli Khan, who penned a fascinating account of Delhi’s social and cultural life in the 18th century.”

It’s hard to equate this frail, paper-skinned man with that flamboyant traveller from Hyderabad. Mr Smith is so quiet that one could sit for hours in the same room as him without registering his presence. It’s difficult to relate to him as the man about whom Rakhshanda Jalil, author of Invisible City: The Hidden Monuments Of Delhi, says: “I find Mister Smith’s work extremely valuable. No amount of bookish knowledge can compete with the sort of insights and real, lived memories he has. The Delhi he has known at first hand is an altogether different Delhi that cannot be accessed by the generation of writers who came after him. What is more, he has a fund of anecdotes and qissa-kahanis (stories) about the city, its people, places and passions.”

Mr Smith types his column on his late father’s Underwood typewriter before walking down to a nearby cyber café, where it is retyped on Microsoft Word by a reluctant café attendant for 20 rupees per page. While modern-day reporters can’t function without search engines, Mr Smith does not depend even on books. “I keep my eyes and ears open wherever I happen to be, for I always write what I have personally experienced,” he says. “Writing to me is just recalling incidents and bazaar scenes, or things noticed in the surroundings of old monuments.”

With titles like “Killer Tree In The Red Fort”, “Durga Puja In The 1950s” and “Loneliness & Street Cries”, the crisply written chapters in Mr Smith’s new book are like a flying carpet that take the reader into a city only he has seen.

Unlike other celebrated writers on Delhi, Mr Smith remains as invisible as the people and places he writes about. He is never seen at book launches or literary gatherings. “My friend (the late author) Khushwant Singh, who greatly admired Ronnie’s writings, always regretted that Ronnie could not achieve the fame he deserved,” says author Sadia Dehlvi, who has known Mr Smith since the 1980s. She adds, “Once Khushwant jokingly told me that maybe Ronnie should have changed his name, which, according to him, was too foreign-sounding for somebody (principally) writing on Old Delhi. Ronnie is like a faceless djinn to his readers, a kind of character that often appears in his own stories.”

Like most Delhiwallas, Mr Smith too is a migrant. Raised in an Anglo-Indian household in Agra, he is descended from the adopted daughter of a British adventurer called Salvadore Smith, who was drafted into a maharaja’s army in 18th century India. The next generations opted for more settled professions. Mr Smith’s father was the Agra correspondent for a number of national dailies. It was through “Papa’s letter” that he was appointed in 1964 as a sub-editor/reporter at The Statesman in Delhi.

For many years Mr Smith had no permanent home in the city. He lived in the cheap hotels that surround the Jama Masjid to this day. This semi-nomadic existence enabled him to explore the Walled City like an insider: his archetypal street-side stories are the stuff that today’s fashionably-titled blogger-flâneurs dream of.

“First I moved to Naaz Hotel, where I stayed in the room that was earlier occupied by (painter) M.F. Husain when he lived in Old Delhi,” says Mr Smith. “I later shifted with my wife to Azad Hind Hotel, where my son Tony was born. We ate most of our meals at Karim’s. In the evenings, we sat on Jama Masjid’s stairs, where we would have seekh kebabs.”

Life for Mr Smith’s wife has been harder because their youngest child, 28-year-old Rodney, suffers from Down syndrome and needs constant care (their two other sons work as a designer and a photographer in newspapers). It didn’t help that women would fall easily for her husband.

“This reputation has been blown out of proportion,” says Mr Smith. “I had my share of affairs when it began to be rumoured that I had a penchant for young housewives…it was true that most of my girlfriends were wives of acquaintances.”

Even his wife, Mr Smith says, was previously somebody else’s wife. “Alvina left her husband in Agra and came to Delhi by train. We married only after her husband’s death. She was very nice to me for the first 20 years but now gets jealous each time I’m visited by women admirers.”

Mr Smith was intimately acquainted at one time with the residents of GB Road’s red-light district – he makes for an entire chapter in The Delhi Walla‘s book Nobody Can Love You More: Life in Delhi’s Red Light District. Society women too were not safe from his charms. “He once dedicated an entire Statesman column on my loveliness,” says a well-known south Delhi author who does not want to be named. “I still have the clipping of that column saved in my files,” she says.

But what will be the fate of the newspaper clippings in Mr Smith’s study? What about the scores of yellowing black and white family photos and letters he has preserved? This accumulation is a rare window not only into an Anglo-Indian world of Saturday night dances and Tambola rounds in Agra’s Postal Telegraph Club, but also into the life of a Delhi writer who has chronicled those aspects of the city that otherwise would have remained unknown.

Mr Smith’s possessions ought to be part of a climate-controlled archive but he doesn’t seem to be concerned. There is yet another “Down Memory Lane” to be written for The Hindu and one more “Quaint Corner” to be filed for The Statesman. It’s his birthday next month and he will have to go to Bara Hindu Rao in north Delhi to get his old favourite Raju ki mutton biryani for the celebrations.

There is no time to plan for posterity.

[This is the 95th portrait of Mission Delhi project]