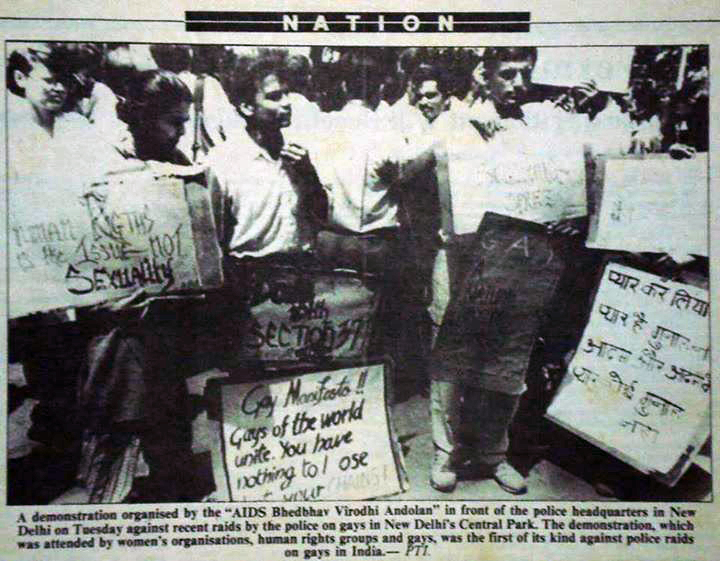 [Text and photos by Mayank Austen Soofi; the above photo was sourced from Gaylaxy magazine]

From the top to the bottom, this is a list of Delhi’s most well-known and lesser-known queer sites. Made with inputs from LGBT activists Steven Baker and Dhamini Ratnam, it details popular cruising areas for men who want to have sex with other men, locations charged with equal-rights activism and commercial spaces where the pink rupee might be spent.

Since the advent of gay dating apps like Grindr and Bendr that reveal how close a user is to his next conquest – within an accuracy range of 20 feet – finding a date can be achieved through the touch of a button. The cruising areas have largely lost their appeal to anyone with a smartphone.

Inevitably, many of the sites on this list have been abandoned; some have closed. But the afforementioned places not only serve as a guide to the progressive evolution of Delhi’s gay life but also identify the landmarks linked to the contemporary history of queer activism in India.

1. Nehru Park
The guests at the 5-star Ashoka Hotel had a bird’s eye view of the late evening activities of this garden that teemed with gay men, from diplomats to vagabonds. One rock near the hanging bridge was the hangout of choice for boys from St Stephen’s College. Sunday evenings were invariably a full house.

2. Delhi High Court
On 10.35am, 2 July 2009, in the chamber one Chief Justice A P Shah and Justice S Murlidhar legalized gay sex among consenting adults.

3. Madras Coffee House
Ever wondered why just one table was adorned with a flower. Red Roses were a secret coded message for queer activists to meet during the 1990s.

4. Central Park
Next time you alight at the underground Rajiv Chowk Metro stop, take a glance around the greenery as you exit. While it has somewhat fallen out of fashion, it was once a popular cruising area and had ignited India’s first media-covered public demonstration by queer men.

5. The park above the Palika Bazaar Parking
Central Park’s gentrification has led to an increased gay footfall in this park across the road. Today, it has become Delhi’s most visible gay cruising area in the evenings. In December 2013, activists gathered here in black to light candles in protest against the Supreme Court ruling on section 377.

7. Patadui House
The Prince Offset Printers in this cramped Old Delhi neighbourhood printed the iconic Less than Gay: A Citizens’s Report on the Status of Homosexuality in India in 1991.

9. Srinivaspuri
This middle-class neighborhood in south Delhi was the postal address of Sakhi, a lesbian network that coordinated its activities from Delhi.

10. Delhi Police Headquarters, ITO
LGBT politics dominated newspaper pages on August 11 1992, when a demonstration was organized by the Aids Bhedbhav Virodhi Andolan against the regular police harassment in Central Park.

11. Regal Cinema
Deepa Mehta’s lesbian-themed film Fire screened here with protestors from both sides of the camp banging their respective drum on the pavement outside.

12. D-45, Gulmohar Park
Back in 1996, closeted men gathered here, at the Naz Foundation’s former office, every Friday evening from 7-9, to meet like-minded individuals. This was also where Sangini, the first lesbian support group, came into being.

13. NYC Unisex Salon
A flash in the pan, the city’s first openly LGBT-friendly unisex salon opened in 2009 in Hauz Khas Market and attracted its in-the-know clientele via a rainbow-colored pride flag in its window..

14. Urinal, Chelmsford Road
Once patronized for brief meets. In 2010, after high-wattage lighting was installed, it soon lost its shine.

15. Pegs n Pints
The death of disco arrived a little later in Delhi then in New York. Tuesday nights in the capital are no longer the same after Pegs n Pints, the only discotheque for the queer for a long time, shut shop in early 2014.

16. Soul Kitchen
Now shut, this bar at Nehru Place was the first in Delhi to create a regular night for the queer community.

17. Tolstoy Marg
Since 2008, it has hosted Delhi’s annual gay pride march. After a couple of years of sweating it out in the July heat, organisers sensibly moved it to the last Sunday in November.

18. Mehrauli Archaeological Park
Among a number of monuments dating from various periods, there are also the Lodhi-era tombs of poet Jamali and of his companion Kamali, who is said to be his lover. This belief made the garden adjacent to the tomb complex a venue for the legendary Jamali Kamali Meetings for queers that took place in the 1990s.

19. Hijron ka Khanqah
This graveyard in Mehrauli has been a gathering space for the ‘hijra’ community over several centuries.

20. Lajpat Nagar
The south Delhi neighborhood was the setting of the lesbian-themed film Fire.

21. Jantar Mantar
Queer-rights activists routinely jostle here for space among flag-waving demonstrators and fast-unto-death protestors, to celebrate as well as protest landmark trysts with queer life. It is also the end point for the annual pride parade.

23. Gulmohar Park
Covered voyeuristically by the media, the Pushkin Chandra murder took place in a bungalow here. Almost everyone in Delhi’s close-knit gay scene had some connection with Mr Chandra, a senior employee at USAID.

26. Hazrat Sarmad Shahid’s Dargah
The Sufi shrine of an ascetic, near Jama Masjid, who is believed to have loved a boy before he settled in Delhi.

27. A-86, East of Kailash
Head office of The Naz Foundation (India) Trust, the NGO that revived a law suit in the Delhi high court in 2001 asking for the legalization of homosexual intercourse between consenting adults.

29. Turkman Gate graveyard
Home to Mona Ahmad, the ‘hijra’ who was the subject of photographer Dayanita Singh’s book.

30. The Lawyers Collective Office, Bhogal-Jangpura
This has legal support spaces for the queer community, and hosts the office where the second and more successful petition against Section 377 was drafted and finalized.

31. Moolchand Flyover
Take a closer look at the somewhat hirsute ladies selling sex at the side of the road. If GB Road is Delhi’s straight commercial sex district, sex workers from the transgendered community have set up trade further south.

32. Indian Coffee House
A platform for the radically minded, it has also been a place for LGBT activists to mingle and strategize.

The annihilation of prejudices