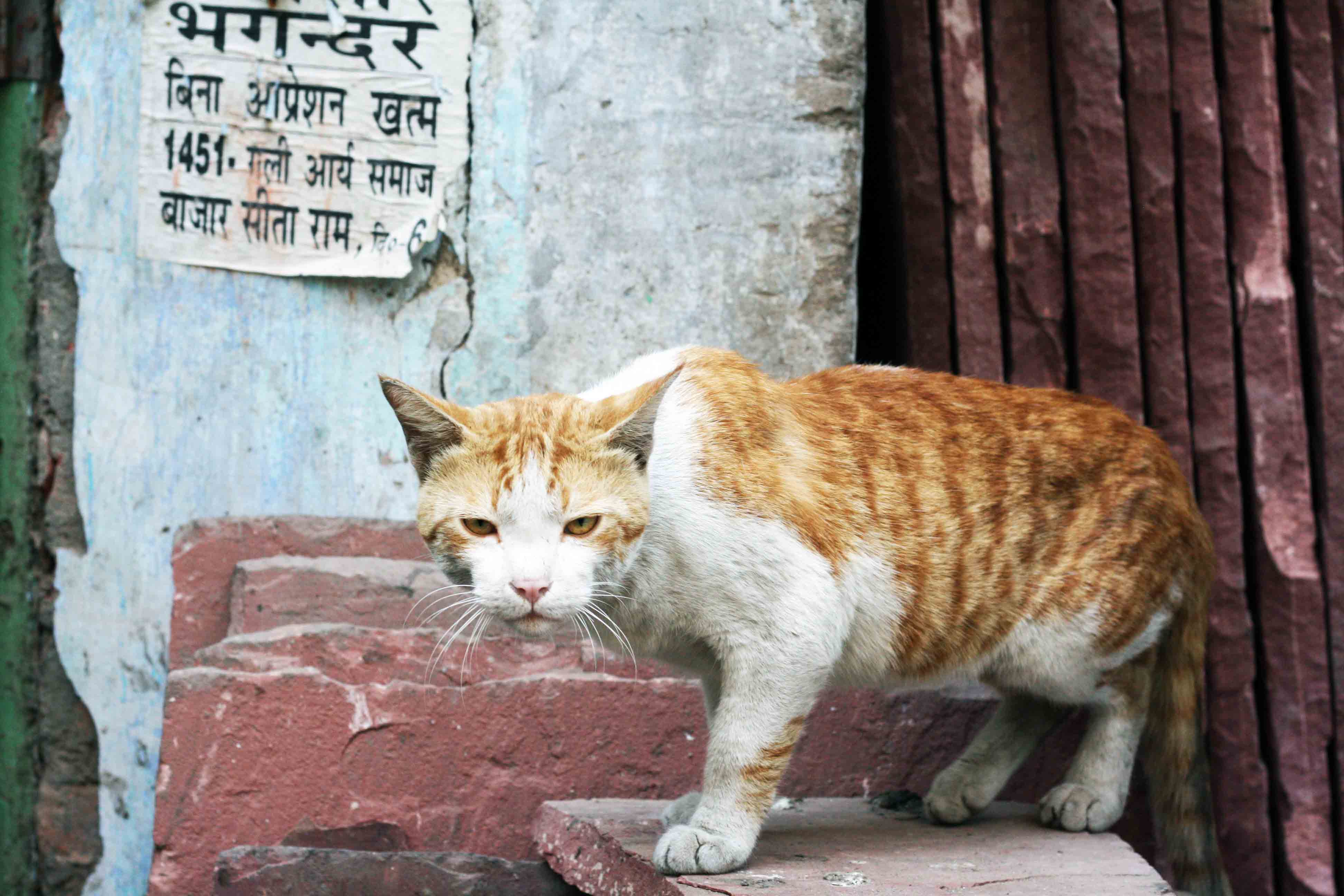 Mehvash Sattar lives with her scholar father and his hundreds of rare Urdu books; the 25-year-old is a master’s student. She has many friends. The closest is the homeless Laali, who hangs out a lot in Ms Sattar’s second-floor apartment.

Laali is a cat.

Earlier, Ms Sattar had “pure white” Silky, who succumbed to pneumonia last year. Another cat, Kittu, died of old age. The filmi-named Chulbul Pandey, too, is enjoying the feline afterlife. Ms Sattar’s mobile phone has photographs of all of them.

The fact that Ms Sattar’s home is a magnet for stray cats doesn’t make it special. After all, it’s in Pahari Imli, which is in Old Delhi. Living with cats is a way of life in this part of the Capital.

This is especially true of neighbourhoods around Jama Masjid. The scores of meat shops in the area guarantee a lifetime of easily available meat scraps for cats.

They are everywhere. You see them sliding under the drain, running up the stairs, perched atop parked scooters, napping beside closed doors. They can be seen in groceries, bakeries and chai shops, even in hair-cutting salons. They loiter in mosques and Sufi shrines, in derelict cinema theatres and at tombs. They freely enter people’s homes. A bowl of milk or a piece of kaleji (liver) is always kept handy for them.

The only places in the Walled City where you may not find cats are in its Hindu-dominated parts. Bazar Sita Ram, however, is full of monkeys.

In the Muslim localities, cats are more welcome than other animals.

But “it is sabab (righteous deed) for us to feed a billi (cat)”, says Sabeeha Jhinjhanvi, who lives in Pahari Rajan street, home to at least 25 cats.

In the book 100 Cats Who Changed Civilization: History’s Most Influential Felines, American author Sam Stall says: “Felines owe this exalted status (in Islam) to Muezza, the adored pet of the Prophet Mohammed. One day, as his faithful pet slept on one of the sleeves of his robe, Mohammed was called away to prayer. Rather than disturb the cat, he cut off his sleeve. When he returned, Muezza bowed to her master and received three strokes down her back in return. This blessing assured her a spot in the afterlife.”

To understand the Walled City’s esteem for Muezza’s descendants, an armchair traveller need not go beyond Ahmed Ali’s Twilight In Delhi. The cat figures on almost every second page of this classic Old Delhi novel. It’s slinking out of narrow by-lanes; it’s emitting a piercing howl; it’s being thrown into a lane; it’s being chased by a dog; it’s licking milk from earthen cups; it’s meowing meekly as if “needing love”.

Indeed, the name of one famous Walled City neighbourhood is considered by some to have been derived from this animal. In his book City Of Djinns: A Year In Delhi, author William Dalrymple refers to Ballimaran, the last home of poet Mirza Ghalib, as “the street of the cat killers”.

Old Delhi, which doesn’t have a single veterinary clinic, isn’t just about cats. The alleys are often jammed with caravans of brick-carrying donkeys. There is the occasional horse-cart. Goats are ubiquitous; so are the shops selling green fodder for goats. It is not unusual to come across elderly men feeding their goats with baby milk bottles.

Dogs are not considered kosher in Islam but many Muslim beggars empathize with their homeless counterparts and let them snuggle under their blankets on cold nights. Muhammed Karimullah, who sleeps outside the Sufi shrine of Hazrat Shah Turkman Bayabani, shares his meals with two stray canines he calls Kaalu and Peelu.

Nevertheless, dogs are clearly second-class citizens here. They are not allowed inside houses; butchers also shoo them away. Little boys throw stones at them, and rarely does anybody protest.

Then there are the pigeons. A number of Old Delhi dwellers keep them by the dozens. Some have these birds in hundreds. Every morning and evening, the pigeon owners let their birds fly over the city’s scenic rooftops.

Unfortunately, cats have a taste for pigeons. All that a cat has to do is climb stealthily on to one such roof and let its paw fall on a bird. A painting at the Charity Birds Hospital in Chandni Chowk shows a pigeon caught by a cat. This is such a common occurrence that an unexpected death in Old Delhi is described thus: “He went away as suddenly as a pigeon taken by a cat.”

In the past, Old Delhi’s pigeon owners routinely caught wild cats, put them in sacks and released them into the moat that surrounds the Red Fort.

A cat raid many years ago led to a medical emergency in Ms Jhinjhanvi’s family. Her late father-in-law kept pigeons on his roof. One afternoon in 1990, he discovered a cat sitting in the birds’ cage. It had apparently slipped in through a hole but was not able to crawl out. As soon as he opened the cage, the cat ran away. Inside, many of his cherished birds lay dead. The elderly man suffered his first heart attack soon after.

Today, Ms Jhinjhanvi holds no grudge. Instead, she feeds cats with cheechra, the skin of the meat that she discards during cooking. Her young son plays with the cats.

“The nature of Old Delhi cats has changed,” says Jhinjhanvi’s husband Muneer, a local politician. “Until the late 1990s, they would immediately hide behind a corner if somebody appeared. Now they stare at you in a friendly manner. They are also great ghumakkar (wanderers). We Purani Dilliwallas believe that a newborn kitten doesn’t open her eyes until her mother has taken her to at least saat ghar (seven homes).”

Late last year, Mukhtar Ali, who runs a tandoori roti bakery in Gali Chooriwallan, was bitten by a cat. He had to get anti-rabies injections at central Delhi’s Ram Manohar Lohia Hospital. Mr Ali limped for many weeks. “Boys teased me by making mewing sounds behind me when I would walk down the street,” he says, adding in the same breath that he has no ill-will towards his temperamental assailant. “Some cats, the ones with shining eyes, have djinns inside them,” he says. “So we have to be kind to all of them.”

The kindest is the man who rides through this part of the old city every morning at 7. He calls out to the cats, using a “Leh, leh” sound, and throws them the pieces of meat that he carries in plastic bags. The good samaritan is said to know the whereabouts of every cat. “He even knows which household has how many cats and what their colours are,” says Mr Ali.

The Delhi Walla came across the man one recent morning; he didn’t want to be named or photographed. “I don’t want publicity for Allah’s work,” he said.

Given his reputation, he might well know about Ms Sattar’s cat.

“Laali cannot be older than a year or two,” says Ms Sattar, holding the black beauty in her lap. “She started appearing on my terrace during the last monsoon. She was tiny. One night, when we were having dinner, Gabbar (a ferocious tomcat in the neighbourhood) caught her by the neck. He would have torn open her chest, but I kicked at Gabbar and rescued Laali. Since then, she has stayed with me.”

Suddenly, Laali jumps from a window into a neighbouring balcony. From there, it leaps up to another roof and disappears. “Don’t worry,” says Ms Sattar, “she will be back”.