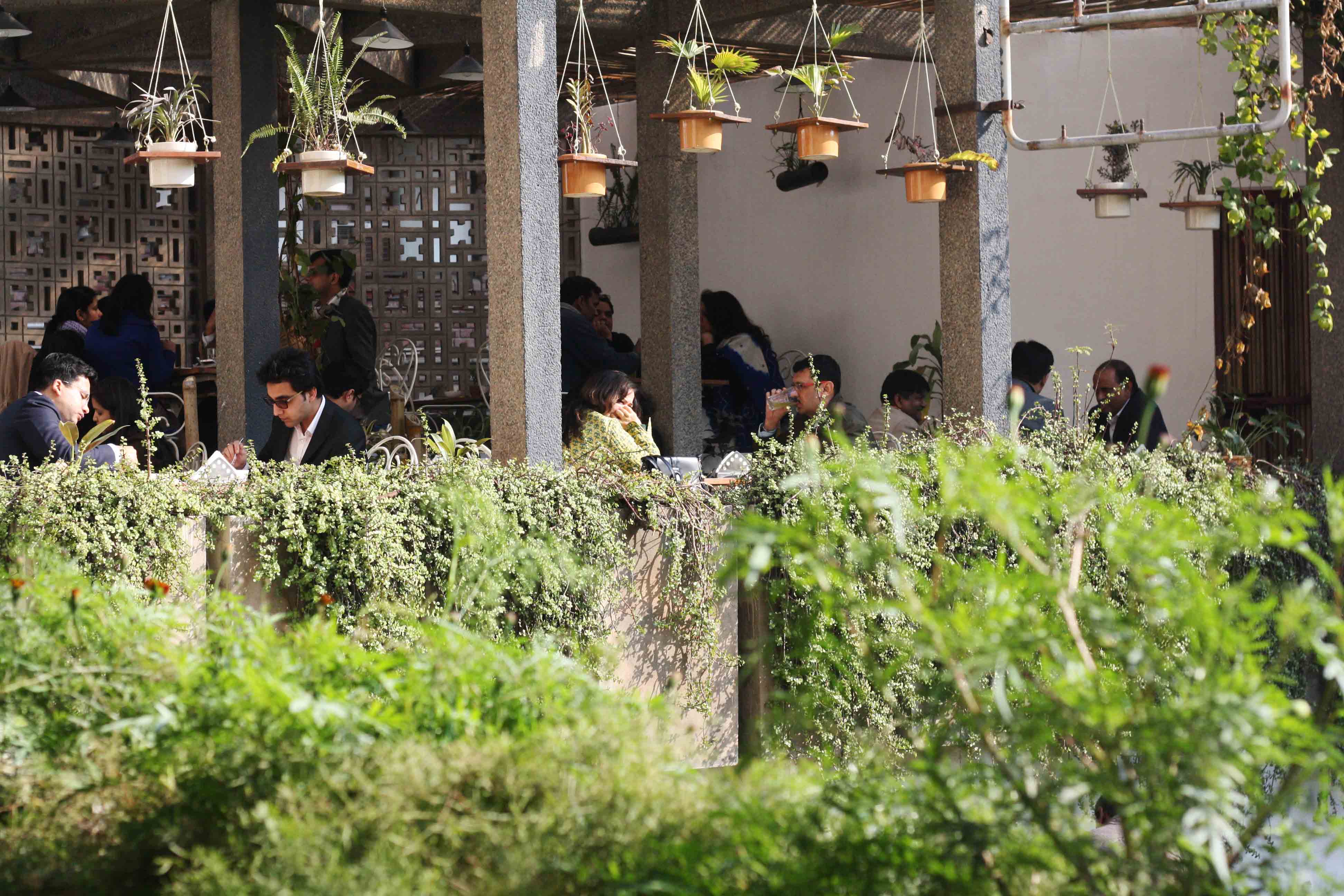 Triveni means “three plaits” in Sanskrit and, indeed, this Delhi landmark could well have been something a god of small and beautiful things had created in three days: first, the shrubbery, creepers and ceramic-pot plants along the wall facing the amphitheatre steps; then the airy seating that invited you to lounge there on sunny winter days; and lastly, the food that was homelier than home.

Thankfully, the canteen reopened in January — with a new look.

Situated in the heart of Mandi House, the Capital’s cultural focal point, the Terrace — which now has a new management — has participated for more than four decades in the lives of the artistically inclined, including legends. Painter M.F. Husain was a regular. So was painter Vasudeo S. Gaitonde, who would be sighted with “his small compact figure and square-jawed face furrowed in concentrated silence”, the late journalist Romesh Thapar observed in his iconic journal Seminar.

Mr Thapar compared the Terrace to a famous Bombay institution, saying, “Artists (during the 1980s) conformed to the stereotype of the left-wing intellectual: jholawalla-types in kurtas, often bearded, barefoot or chappal-shod, argumentative or morosely silent, sipping endless cups of tea at the Samovar Café in Bombay or the Triveni Tea Terrace in Delhi.”

The old-new menu still has the much loved Tasty Toast and the Spiced Carrot Cake.

“We have changed nothing on the menu, not even the prices,” says Iona Joshua Sinha, one of the three managing partners who have taken over the Terrace. “They are the same iconic Triveni dishes and the same recipes. The shami kebab guy is still the same cook from Nepal,” says Ms Sinha, who also co-runs the voguish Café Lota at the Crafts Museum in New Delhi, and the Roots café in Gurgaon, near the Capital.

The only tampering is the addition of four dishes: Chicken Biryani, Poha (just like mom’s), Upma and (supremely delicious) Palak Patta Chaat.

One late morning, the sunshine fell shyly through the slits of the Terrace’s bamboo roof. The place teemed with Mandi House power-brokers — a grim-looking woman in a cotton sari, very likely an art curator; three men in business suits, perhaps from Ficci (the Federation of Indian Chambers of Commerce and Industry) across the road; two lawyers, possibly from the nearby Supreme Court; and one person absorbed in a newspaper. The remaining tables had young, giggling student-types.

The rhythmic sound of tha tha floated to the Terrace, as if an elderly guru was teaching classical dance. Soon, someone began playing the flute.

This is routine here.

The Tea Terrace is one of the many elements that make up Triveni Kala Sangam, a four-storey complex that not only hosts classes on music, dance, painting and photography, but also houses some of the Capital’s leading art galleries, including the one set up by the legendary theatre director Ebrahim Alkazi.

The elegant, streamlined structure was designed by Joseph Allen Stein, the late American architect who gave New Delhi some of its most beautiful garden buildings. His California-based son, David, a frequent visitor to the Capital, responded to an email, saying: “Triveni was my father’s first major structure in Delhi, and in many ways it was the best in terms of working with the client and having a real meeting of minds over the design and the implementation. On my short visits, I always thought the Tea Terrace to be a delightful place where one could run into all sorts of people from Delhi’s artistic circles.”

Opened in 1963, the complex was set up by the late Sundari K. Shridharani, who began her career as a dancer in Uday Shankar’s troupe. “There’s no record of the exact date when the Terrace opened, but it came into its own in the 1970s and 1980s,” says Vasundhara Tewari Broota, the institute’s director, art and administration. “Its artistic environment and its moderately priced home food continue to pull new generations. If you go around Delhi, you will find several people fondly remembering their youth at the Terrace.”

“Ah, the Triveni Tea Terrace was our favourite adda (meeting point),” says socialite Ratan Kaul, a familiar face on Page 3. “It was the meeting point for perpetually broke students and artists. I saw a lot of college-time romances flourishing over garam chai, veg pakoras and sandwiches. Now much married and settled, I still go there to eat the yummy kebabs and the stuffed parathas.”

As the day lengthened into a pleasant, sunny afternoon, the lunch-hour crowd started streaming in. A young woman sat alone at a table for two. “This is the time when I want to be with myself,” says Swati Sahai. Working in a building nearby, she says: “The first time I arrived after the Terrace reopened, I was disconcerted to see a drastic change in its interiors. Triveni’s soul is its food and atmosphere. You’ll destroy the place if you recklessly alter either.”

Dearly loved places that remain in currency for a long time are also cherished for their flaws. Take the Indian Coffee House in Delhi’s Connaught Place, which is endearing not only for its smartly uniformed waiters but also for its torn sofas and bad coffee. It’s comforting to see that at least one place has remained the same when everything else has changed.

So, to revamp a treasured establishment like Triveni Tea Terrace needed sensitivity.

“This is an old establishment where a diverse range of customers have been coming for years,” says designer Mithva Krishen, who did the interiors and whose parents used to hang out at the Terrace. “You had to take that into consideration when retouching the place with a contemporary brush.”

The “limited budget” made Ms Krishen scout for second-hand furniture from south Delhi’s Amar Colony. She replaced the uncomfortable moorahs in the less exciting darkish room, adjacent to the Terrace, with cane chairs and brought in a long side table with bar-like stools for single customers in a rush. Outside, plastic chairs have given way to wrought-iron chairs painted white, enhancing the “garden feel”. Each rough-wood table has a kulhar (earthen cup) holding a tiny plant as its centrepiece. Pendant lamps hang from the ceiling.

Thankfully, no radical attempt has been made to disturb the old setting. The row of tables along the shrubbery is still there; situated picturesquely at finger’s length from the sunflowers.

But the Terrace has also been loved all these years for something that is no longer there. Its solid reputation is the work of three women who managed it one after the other. The first was a certain Mrs Acharya. Said to be a “well-built, formidable woman”, with a signature bun and crisp cotton saris, she was “one-on-one with every customer”, says Broota, who has been associated with the Triveni Kala Sangam since the early 1970s. She adds that Mrs Acharya introduced the immortal shami kebab.

The next manager, the salwar-kameez clad Mrs D’Souza, was frail and short, quieter and gentler, and always ready with an obliging smile. She was succeeded by the much younger Meena Singh, whose favoured costume was kurtis and trousers. According to Broota, Meena upgraded the Terrace, got in fresh cutlery, and was a totally hands-on person who was always seen standing during the busy hours making sure everything ran smoothly.

The new management obviously has some big sandals to fill. So far, it has passed the shami kebab test. The biryani is marvellous too. The old has segued into the new.

One kebab and a marigold please

5. (Rann Bahadur with his Shami Kebabs)