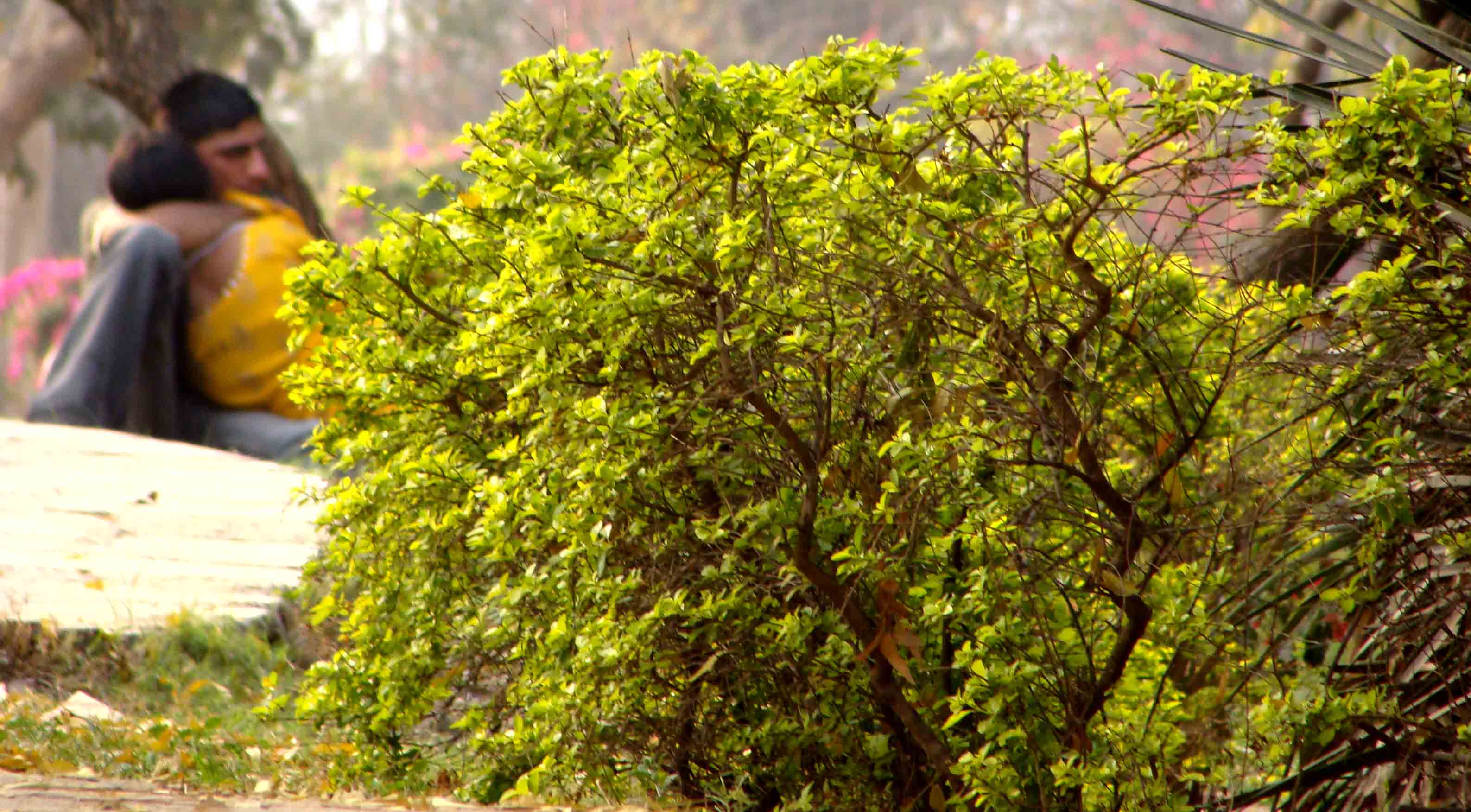 The geography of love.

On a weekday afternoon, the park’s long, circular jogging track is empty. So are the green benches. The expansive lawns seem abandoned. But love is everywhere — in mausoleums, under a bridge, on a rock. On the rampart of Sikander Lodi’s tomb too. The wall spans out in a series of recessed arches; each has a Juliet and her Romeo. There flashes a wooing arm, a soft kiss.

Every move of these lovers is public; it’s on the Internet too. A short documentary on YouTube, titled Sexuality in India: Why People Hide In Lodhi Gardens, shows a pair kissing near a tea vendor.

In February 2014, a Hindu nationalist outfit in neighboring Uttar Pradesh threatened to forcibly marry couples caught celebrating the “foreign festival” of Valentine’s Day. The organization is reported to have said: “India is a country where all 365 days are days for love, why then must couples observe only 14 February as Valentine’s Day? We are not against love. But if a couple is in love, then they must get married…”

They may not have intended it, but the first half of the utterance does hold true for Lodhi Gardens. Here, it’s romance in all seasons, though summer is friendlier. In her essay Lodi Garden, published in the anthology City Improbable: Writings On Delhi, novelist Bulbul Sharma writes, “Winter afternoons which bring great crowds of people to Lodi Gardens cause great grief to the courting couples who long for the quiet, sultry days of summer when they can sit safely under the shade of the neem tree and whisper sweet nothings to each other, watched only by a sympathetic pair of cooing doves.”

Ms Sharma forgot about peeping Toms like The Delhi Walla. Over the years, I have off and on interacted with the lovers in this central Delhi park. Most said they had chosen this place, far from their homes, in the hope that no acquaintance would see them together. At stake is their reputation, and that of their families.

Many of these couples are the children of first-generation migrants to the Capital. Their Delhi is the city that author Ranjana Sengupta lucidly sketched out in her 2008 book Delhi Metropolitan: The Making Of An Unlikely City. “Lodhi Gardens are a rare bastion of liberality and tolerance, an oasis marked in the maps of Delhi’s lost lovers,” Ms Sengupta says. “It is a thin fig leaf perhaps but most of the VIPs who walk in the Gardens would not approve of the persecution, public shaming and exposure of the couples who congregate there. The police know this and hence they leave the lovers alone. The power walkers have power and influence and would stop any police brutality in its tracks, though the same individuals might be reactionary and intolerant otherwise in their lives. At least that is the perception.”

Of course, lovers pervade every public park in the Capital that is not nestled within a residential locality. A stroll in the Buddha Jayanti Park near Dhaula Kuan revealed bolder expressions of intimacy than in Lodhi Gardens.

In Lodhi Gardens, you don’t have to be an anthropologist to spot the social disparity between the lovers and the regulars. The latter include ministers, industrialists, bureaucrats, diplomats and columnists. They tread firmly on the soft earth; their outdoor gear would be eyed with admiration in the tony Khan Market nearby.

The lovers walk hesitantly. Their eyes dart around anxiously, like those of an unlicensed street-food vendor scanning for policemen. The girls are almost always in salwar-kameez suits.

“Delhi’s young lovers who seek refuge in parks don’t have anywhere else to go, so they’re not young professionals with their own places,” says Ms Sengupta. “They’re on the margins of the middle classes or from towns in the suburbs, living with relatives or in crowded PGs, and can’t afford hotels or weekends away. They will not be clothed in frayed denim or GAP/Next/Zara/Benetton (original or knock-off). They lack the self-confident ethnicity of south Delhi/Noida/Gurgaon progeny. They’re neatly dressed—dressed for the office or the call centre or college, which is where their parents expect them to be. The parks are the only places they can go to be together and Lodi Gardens is the safest of all of them. If they are caught, they are not likely to say, “My father knows the police commissioner…’,” she adds.

A teenaged couple sitting on the steps of Muhammad Shah Sayyid’s mausoleum in Lodhi Gardens is overheard talking in Hindi.

Boy: You picked up a call from an unsaved number?
Girl: You are pagal (mad).
Boy: Tell me who it was.
Girl: You are making dahi out of my dimaag (you’re irritating me).

Close by, a woman in a black burqa and black leather overcoat is snapping at her boyfriend. He holds his ears, as if seeking pardon. She is not mollified.

The slope beside the Mughal-era Athpula stone bridge has as many couples as there are ducks in the pond below. Every couple is seated in the same posture. The young men have their legs spread apart and the women lie in front with their heads on their partners’ shoulders.

“Delhi doesn’t enable lovers,” says Ms Sengupta. “I can’t think of a city lower in the romance stakes, unless we’re looking at Jeddah or Tehran. The only space that remotely qualifies is Lodhi Gardens, and that is more because of the oddities of the city’s various contradictory universes than any true sympathies for the needs of desperate lovers. It’s Lodhi Gardens’ location at the very heart of Lutyens’ Delhi (and you could argue that it is the heart of Lutyens’ Delhi) that allows couples in search of privacy to conceal themselves undisturbed in bushes, undergrowth, and in the various passages and alcoves of the Lodhi tombs. What the kings think about such acts taking place near the resting places of their now-powdery bones, I don’t know. But then what they think of the area surrounding their mausoleum becoming the favoured recreational space for the Capital’s elite is also unknown.”

Evening is setting in. The tombs and lawns are gradually emptying of lovers. Lodhi Gardens will soon be left alone in the dim glow of its lamp posts.