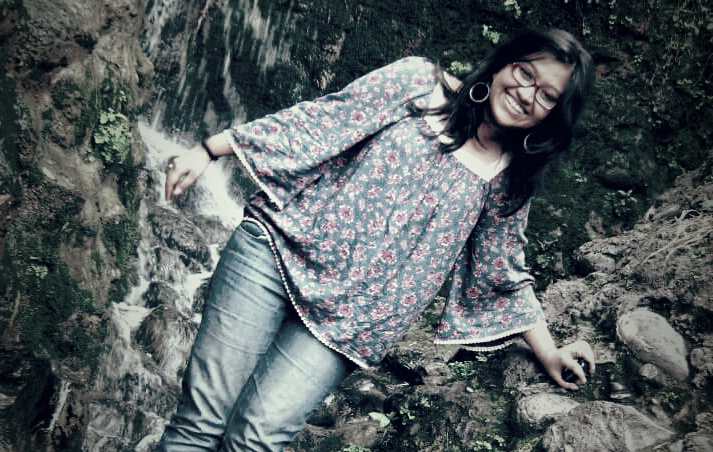 A happy-go-lucky girl, Tanushree Ghosh dreamed of sliding down waterfalls; loved the smell of wet earth and of yellow pages of an old book; consumed the works of Woolf, Tolstoy, Marquez and Kundera; laughed while watching Jaane Bhi Do Yaaro and Andaz Apna Apna; cried in loneliness; slept to jazz, blues, ghazal and R.D. Burman’s music; dressed in a retro style; livened up to Kathak moves; but, most of all, lived to eat and died of excitement, every time a waiter approached her table with the much-awaited pork ribs and Goan sausage fry, and of gratification, at the taste of the first morsel. Ms Ghosh was a solitary reaper, harvesting the episodes of her life and penning them in her diary. She was clairvoyant in the reverse. Always detached from the present, she belonged to the past. A past she could see clearly — her eight previous lives, and deaths. This was her ninth life. And no, Ms Ghosh wasn’t a cat.

Life 1: Ms Ghosh was the little-known, MIA wife of William Shakespeare, Anne Hathaway. The older wife would tell stories (inspired from the soap operas she watched on her pocket TV) to put to sleep her boy-husband, who (thinking the ideas were original) would later jot them down and, unbeknown to Anne, published under his name at his private printing press. Anne died every time Shakespeare silenced a woman character (Desdemona, Ophelia…).

Life 2: Ms Ghosh was the legendary Anarkali, romancing Mughal emperor Akbar’s son Salim/Jahangir. Infuriated by their affair, Akbar ordered Anarkali to be buried alive between walls. Little did the emperor know that through a gap in the wall prince Salim visited his ladylove each night. Anarkali died first of an STD and then, lack of oxygen.

Life 3: Ms Ghosh was Elizabeth Bennet, Jane Austen’s classmate and arch-rival, who always scored more in literature. Unable to digest defeat and humiliation, Jane murdered Lizzie’s personality in her second novel by borrowing her name for the protagonist — a hypocrite, an unlikeable character, who eventually embraced everything she repudiated at the outset. To avenge herself, Lizzie poisoned Jane’s dinner and faced capital punishment.

Life 4: Ms Ghosh was a black slave in a cotton plantation in South Carolina. She wanted to revolt against sitting in the sun plucking cotton. In order to escape torture, running (and getting caught) wasn’t an option, so instead she decided to turn white, by changing her skin tone. She applied the White Man’s fairness cream, but unfortunately, it reacted with the sun rays and she died of skin allergy.

Life 5: Ms Ghosh was Umrao Jaan Ada, or Amiran of Faizabad in Lucknow. It was at a mushaira that Mirza Hadi Ruswa, enamoured by her, decided to pen her story. At one of their dalliances, she sang Dil cheez kya hai, aap meri jaan lijiye (What’s in a heart, take my life instead), to which Ruswa, in a gesture of love, gifted Umrao a year’s supply of her favourite mutton biryani and Tunday kebab. Ruswa hoped for an exclusive couplet, but hapless he gaped at Umrao engrossed in her meal. She forgot about singing, about sleeping, about the time of the day, and ate on until the day she choked on a bone and died.

Life 6: Wakes up. Eats. Goes out for a walk. Steps on a banana peel. Slips. Somersaults. Dies.

Life 7: Ms Ghosh was a famous south Indian star, unparalleled in her beauty, dance and stunts. Rohit Shetty cast her opposite Shah Rukh Khan in Chennai Express. In a song sequence, she cartwheeled and lay on the tracks when an unscheduled Chennai Express local train suddenly emerged out of thin air killing the actor. Her role, unfortunately, went to the average, stork-like Deepika Padukone, whose fake Tamil accent was the only original thing about the film.

Life 8: Ms Ghosh loved to procrastinate and was always lost in thoughts. She was tired with the world and was too good for anything. She hated work and movement. Termites ate up her certificates, but she didn’t budge. She would go on arranged blind dates and indulge in male bashing. She would often think of making a sketch now, drawing a doodle then, cooking a dish now, writing a song then, but nothing seemed to excite her. Each passing day she would be tired of her folks watching Bengali soap, of eating mundane meals, of sleeping on her no-longer-soft bed, of trying to finish reading half-read books, of attending calls to make small talk. Lying on her back, she would gaze at the ceiling. The vilambit laya (slow tempo) of Raag Malhar, playing in the background on her great grandfather’s Murphy radio, added insult to injury. Pained by the act of breathing, she collapsed with boredom, and died at the tender age of 28. The music had long changed to Raag Bilaskhani Todi but her parents continued watching Bengali soap.

Life 9: Ms Ghosh was the exceptional, and most feared, copy editor of one of India’s smarter newspapers. Tired, and annoyed, at correcting not just grammar and syntax but also the very facts of every story (or non-story) that landed at her desk, she would infamously slash the copies of many a journalist. But most of all, she had a love-hate relationship with one particular writer. It rattled her nerves every time he walked up to her to make a million changes to his copy on production days or went on a poetic trip to describe something as mundane as a garbage bin. One day, this writer decided to put an end to the daily squabbles, and walked up to Ms Ghosh’s desk, standing behind her chair with an Old Delhi axe in hand. The minute she cursed the said writer, he chopped off her head.