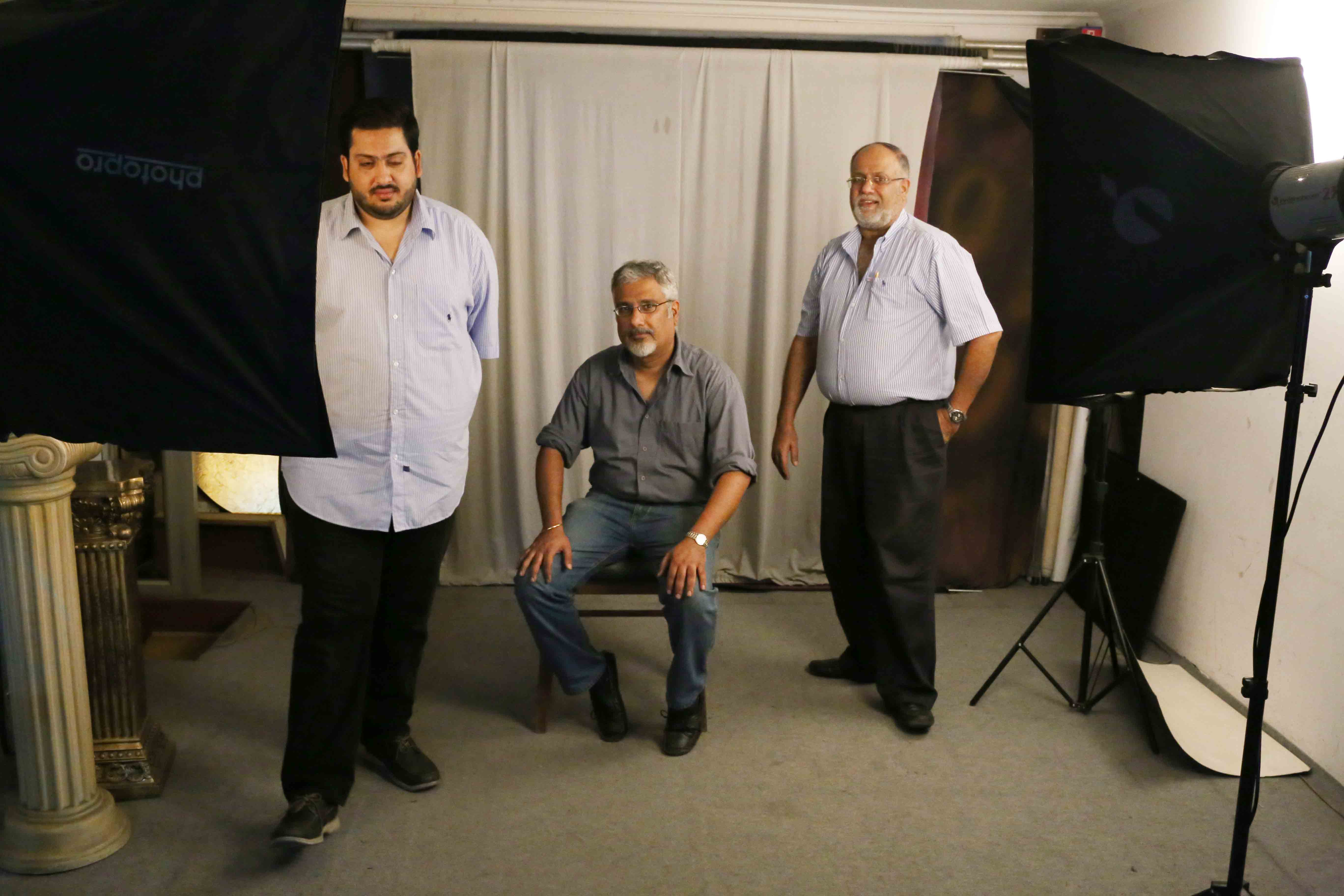 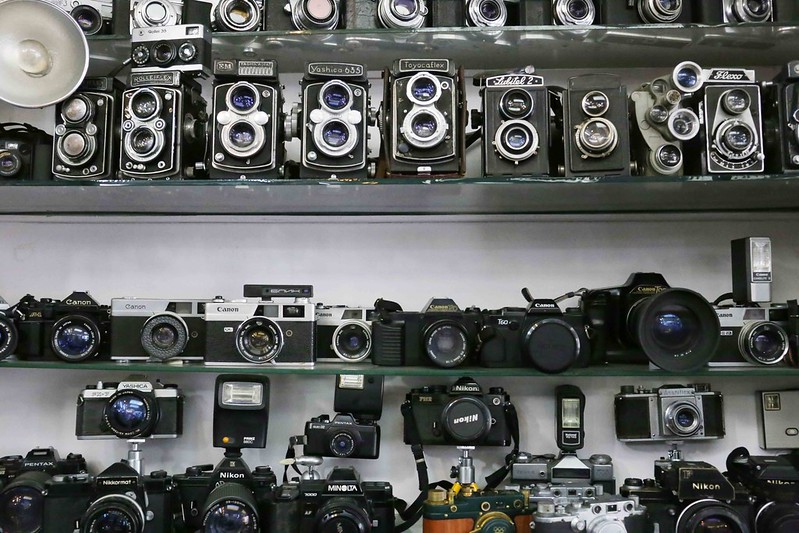 Not a moment to spare. A constant stream of customers through the door. Some wanting to get their portrait done, others their photos developed. Some inquire about cameras. Maharani Gayatri Devi and painter M.F. Husain have been seen here. This is Mahatta & Co., the legendary photo studio in M Block, Connaught Place.

This year (2015), Mahatta & Co. turns hundred. The founder, Amar Nath, died 30 years ago. His son Madan was the most famous of the Mahattas; he died last year. Madan’s sons—Pavan and Pankaj —run the show now. They will release a hundredth anniversary commemorative book this August; they will also host a photo exhibition the same month.

On a recent afternoon, the showroom did not have a single customer. Maybe the lack of bustle was a fluke. No matter how many customers are in attendance, there should be champagne bottles popping. Mahatta & Co. is an institution. It was the first one to bring negative to positive colour printing in India (in 1954). Actor Amitabh Bachchan learnt photography from them.

“I taught him,” says Pavan Mahatta, the elder of the two brothers. “It was sometime during the 1980s. Amitabh Bachchan had just recovered from the injuries he suffered on the sets of Coolie. He was staying with his parents in a farmhouse in Mehrauli. I would go there daily for a couple of hours. We converted the toilet into a darkroom.”

There’s good news from New York. In July this year, Delhi-based photographer-archivist Ram Rahman met the curators at the Museum of Modern Art (MoMa) and showed them photographs taken by Madan. A UK-trained photographer, Madan captured shots of the Nehruvian-era buildings with his Nikon and Hasselblad extensively from the 1950s-1980s. “Madan’s superb pictures generated a big discussion, especially as the big show up at MoMa at the moment is the Latin American Modern architecture of the same period,” says Mr Rahman, who curated Madan’s exhibition ‘Delhi Modern’ in 2012. Responding to an email from the US, he further says, “The Latin work and the Indian work had the same utopian visionary spirit of social transformation. I’m having further meetings with the curators next week. It looks like the museum is keen to acquire material.”

The idea of a photography studio is outdated. Connaught Place has become a graveyard of such enterprises. Regal Cinema Building had Shimla Studio; Janpath had Rangoon Studio and Delhi Photo Studio, which is now a Mediterranean restaurant. The much older Kinsey Bros in A Block closed two years ago.

“The new-age generation has killed the photography labs,” says Pankaj. “You take a photo on your iPhone, upload it on Facebook; it immediately gets ‘Likes’, you get instant gratification. Where do we fit in?”

Clearly, someone at this shop knows how to adapt to the changing times. The Mahattas are staying afloat through re-inventions and compromises. In 2005, the shop started to stock mobile phones. Last year, they converted half the showroom into a store selling outdoor adventure gear like rucksacks and sleeping bags. “We had to evolve,” says Pankaj. “Photography alone is no longer viable. Now, there’s no reel, no lab, no post-processing. Everything has been digitalized. We offer specialized services such as high-end fine printing of photographs.”

“I’m not into nostalgia nonsense,” says Delhi-based photographer Raghu Rai. “The fact that Mahatta & Co. still exists shows that they have moved with the times.”

These days, weddings are the firm’s biggest source of income. The home page of the Mahatta website, www.mahatta.photography, shows a collage of brides and grooms. They charge around 5 lakh rupees to cover a three-day marriage extravaganza, which includes both photographs and video.

Although the signboard says that the Connaught Place landmark was established in 1915, it actually came much later. Mahatta & Co. was originally set up that year in Srinagar, Jammu and Kashmir, by the young scion of a landowning family in Punjab—he had run away from his hometown after his parents were murdered over a property dispute. “Our grandfather Amar Nath Mehta was a very proud man and did not like the British mispronouncing his last name. To avoid that, he named his shop Mahatta and not Mehta, so that it could sit properly on their lips,” says Pavan.

Soon the Mahatta empire expanded into the tourist towns of Gulmarg, Pahalgam in Kashmir, and Murree and Rawalpindi. Partition proved to be the first game-changer. Amar Nath shut down the shops in Murree and Rawalpindi in Pakistan, handed over the one in Srinagar to his younger brother and drove down to Delhi, where he opened a new store in Connaught Place in 1948 (previously, that space housed the lodging quarters of an insurance company).

While the Srinagar shop remains operational, its spin-off in Delhi has grown to be an institution—one of those landmarks whose story runs parallel with that of post-independence Delhi. The company has an archive of more than 300,000 photographs; they include early 20th century glimpses of Kashmir, Rajasthan and Delhi. “We are doing a Fine Arts series on New Delhi, in which we print early pictures of the city on museum-certified paper,” says Pankaj. “Interns from NID (National Institute of Design, Ahmedabad) are working on our archives. We plan to build a revenue model out of it.”

One iconic photograph from those times is a panorama showing a man holding a steel lunch box looking at the Rashtrapati Bhavan.

At one point, Mahatta & Co. had 70 employees—besides photographers and their assistants—there was staff for filter-processing, picture enlargement and post-production. “People in one department had little idea about the specialization in the other,” says Pankaj. In today’s multi-discipline world, the number of full-time workers has been whittled down to 15.

No one can predict how Mahatta & Co. will look in 10 years.

“I wish it could be turned into a museum of photography,” says photographer Dayanita Singh, who has had a long professional relationship with the Mahattas. “Dayanita almost grew up here,” says Pavan. “Her photographs were printed and processed in the lab area on the first floor. You would always see her there.”

Indeed, one of Ms Singh’s prized possessions is a curtain from the dark room (today the ex-dark room has become a space to keep digital printing machines).

“The showroom should remain as it is, like a large diorama, except you could come into the museum and buy a real camera from a real person who would guide you ably,” she says, “The room next door could be the Madan Mahatta gallery with a permanent installation of Madan’s photos. The other rooms could host rotating exhibitions.”

That could take care of the next hundred years. 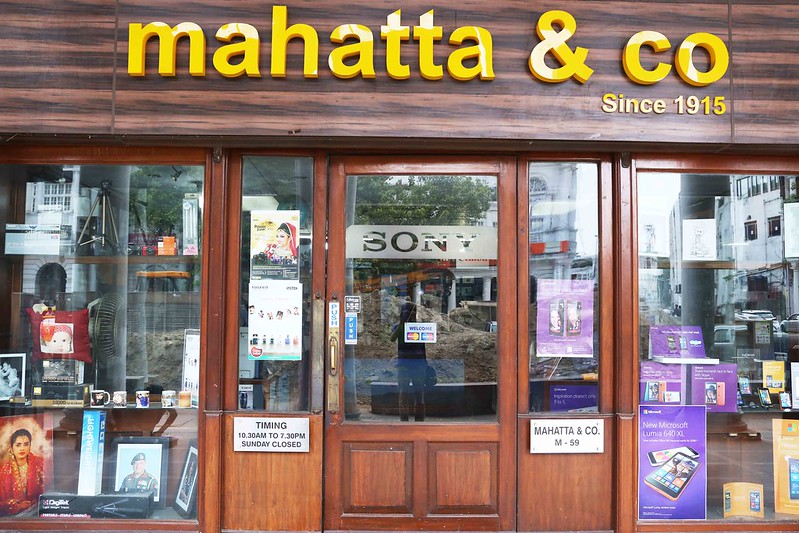 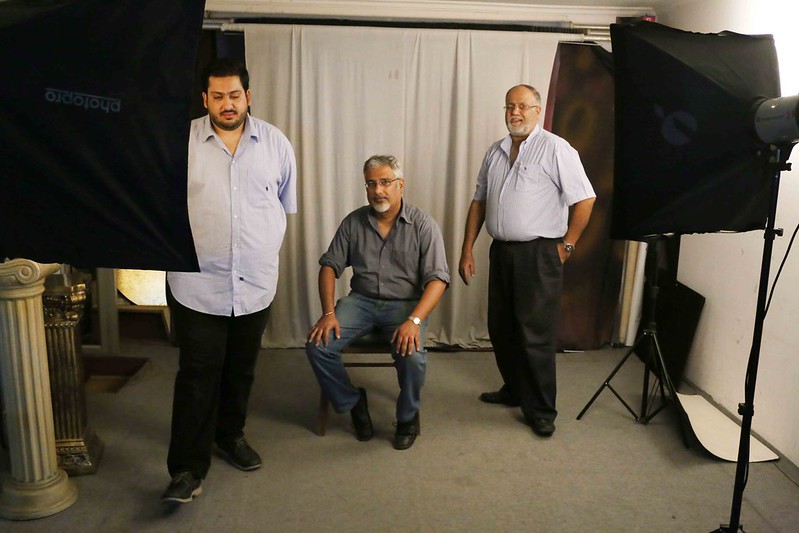 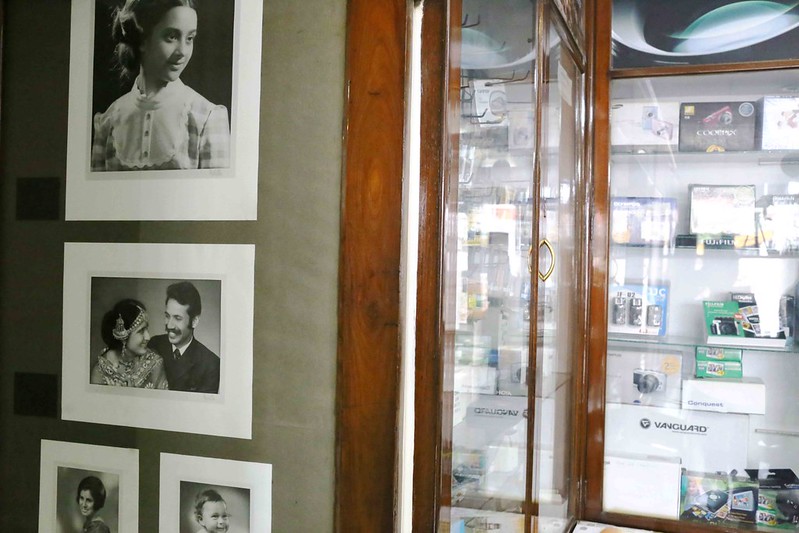 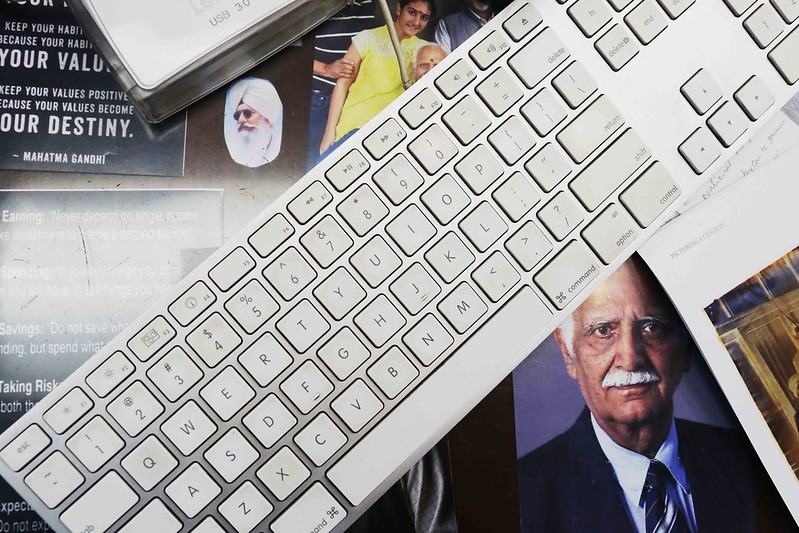 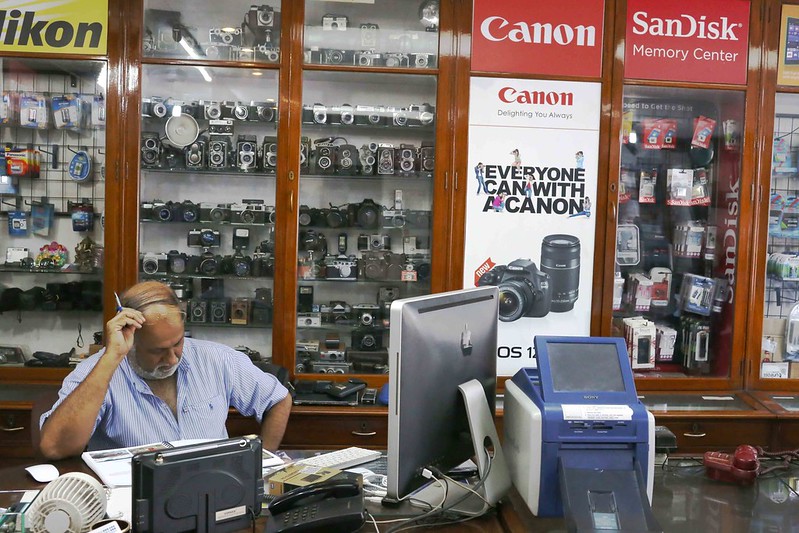 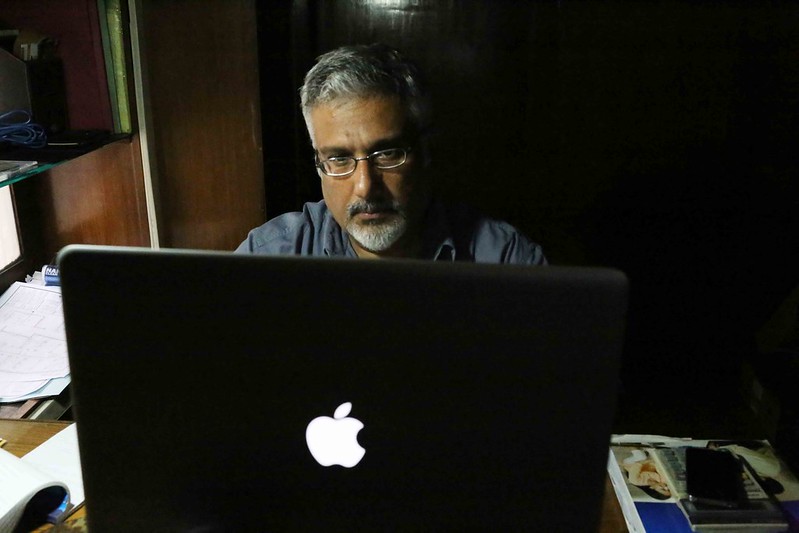 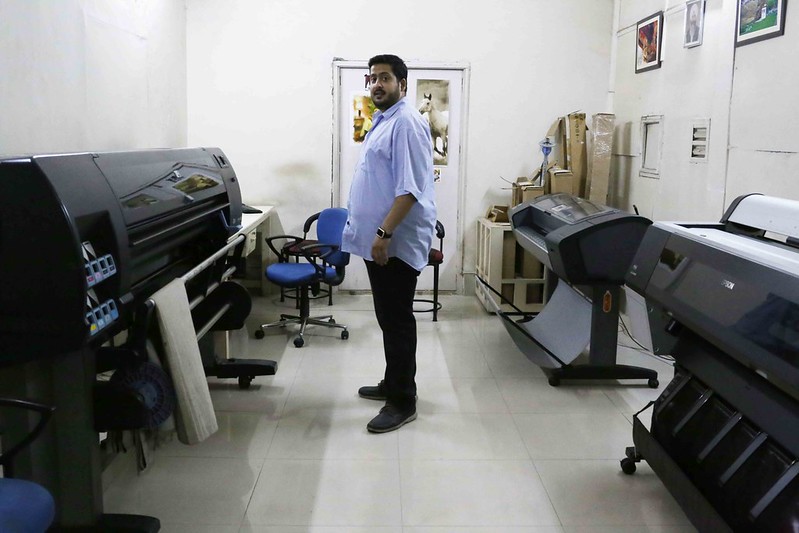 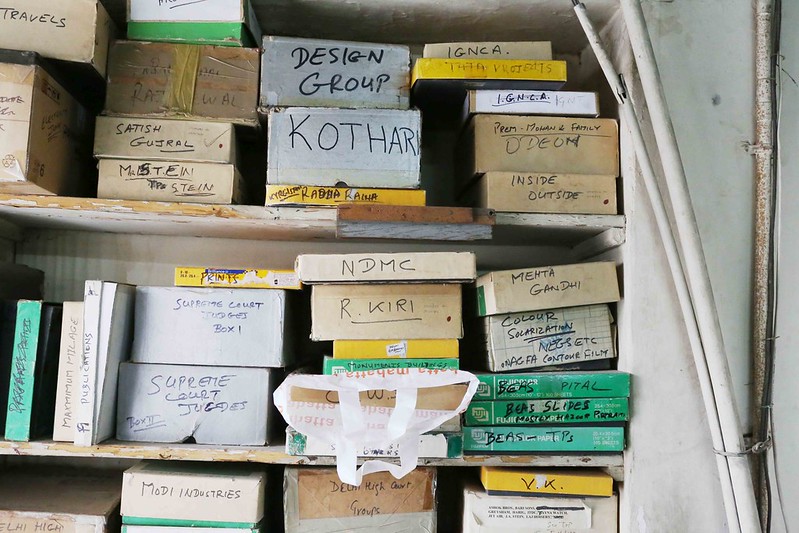 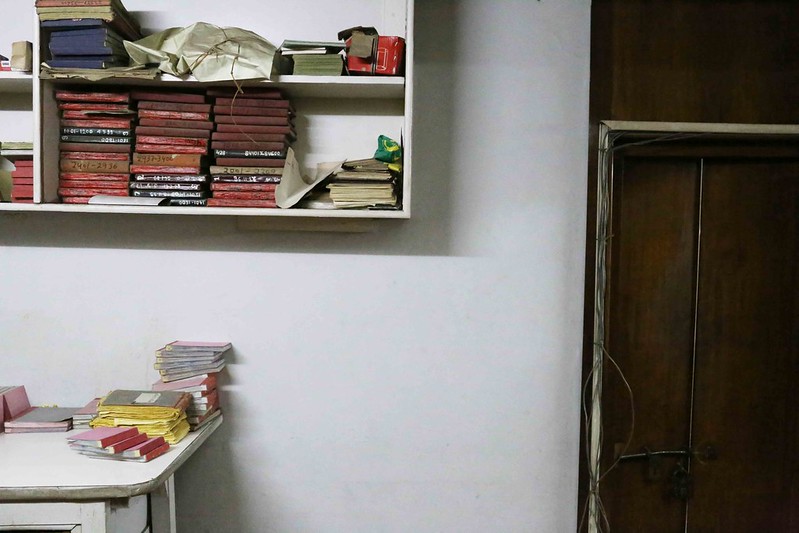 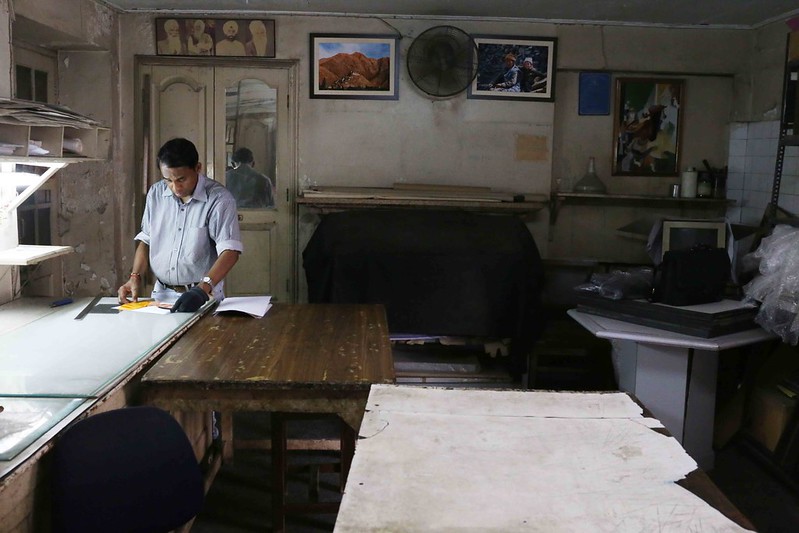 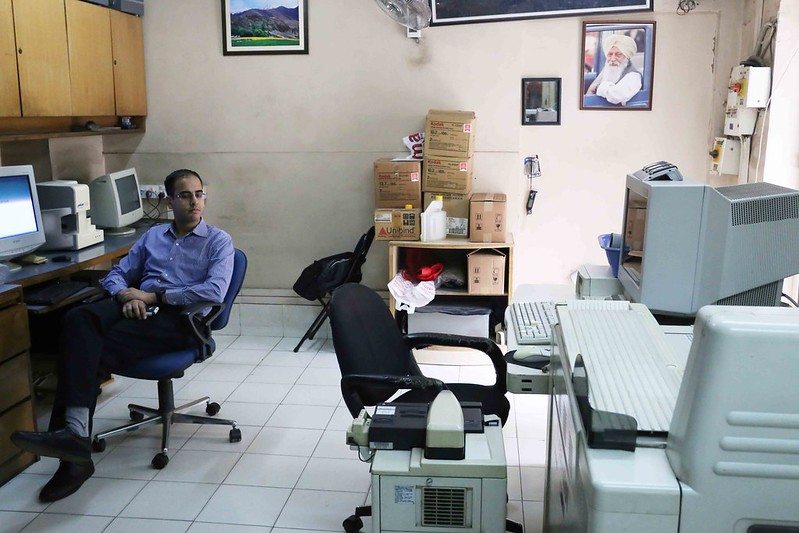 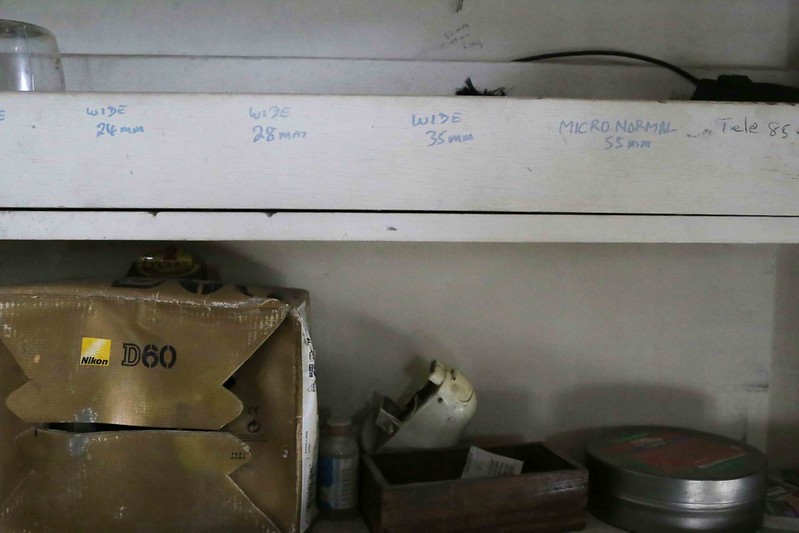 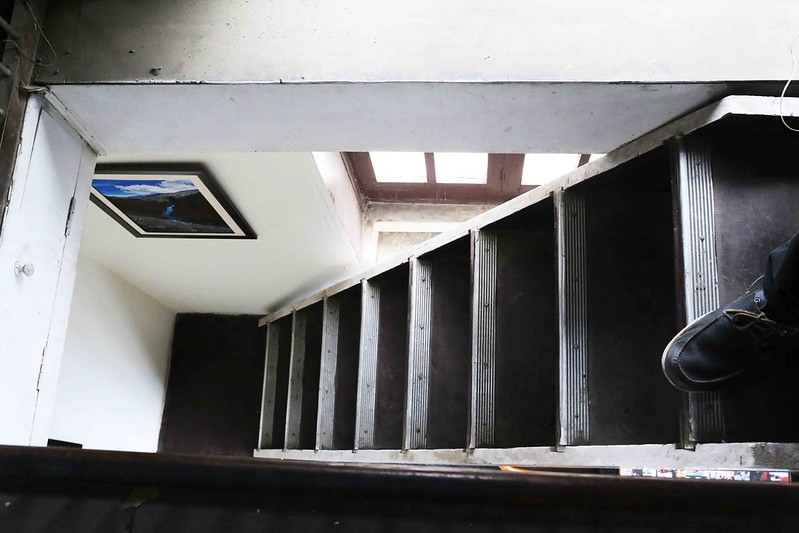 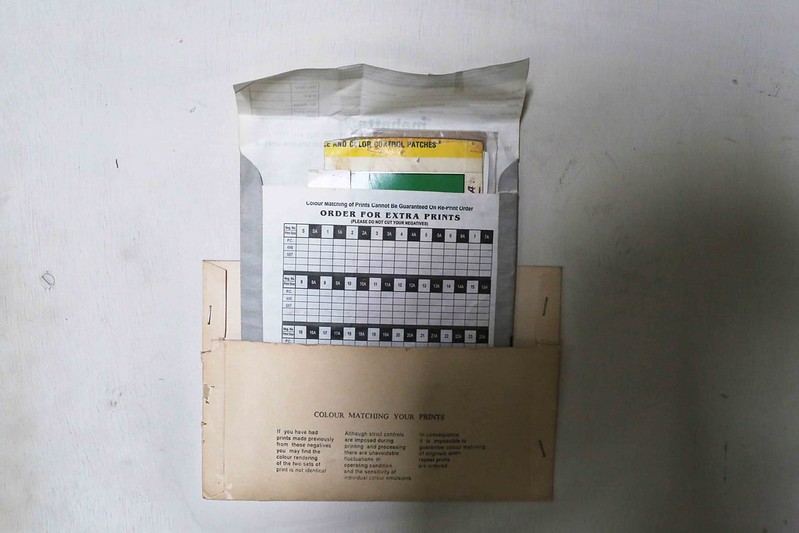 15. (Arjun Mahatta in his work room, which once was the office room of his grandfather Madan) 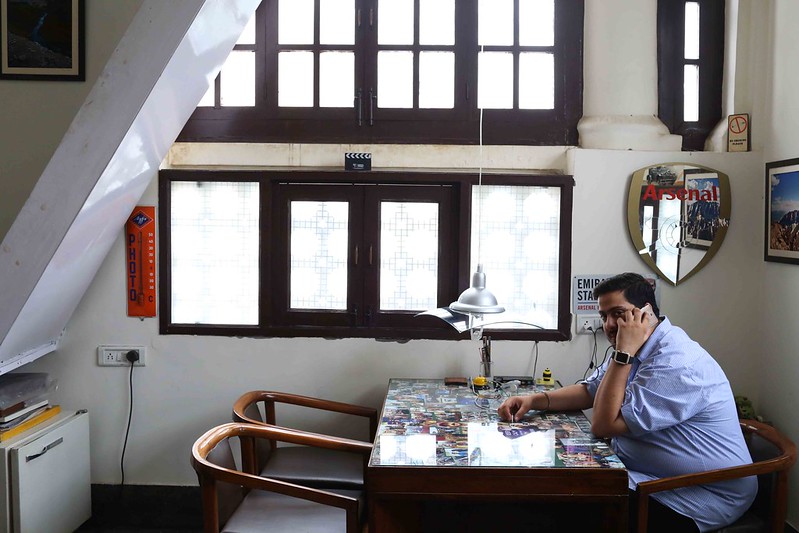 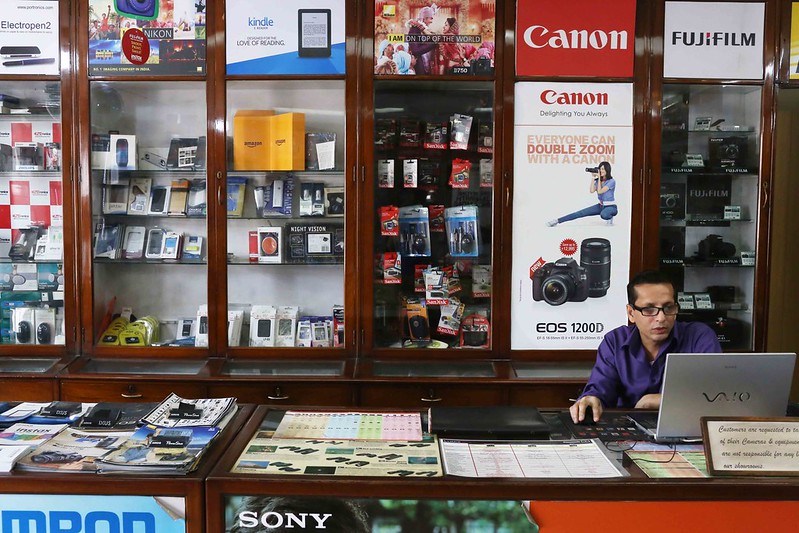 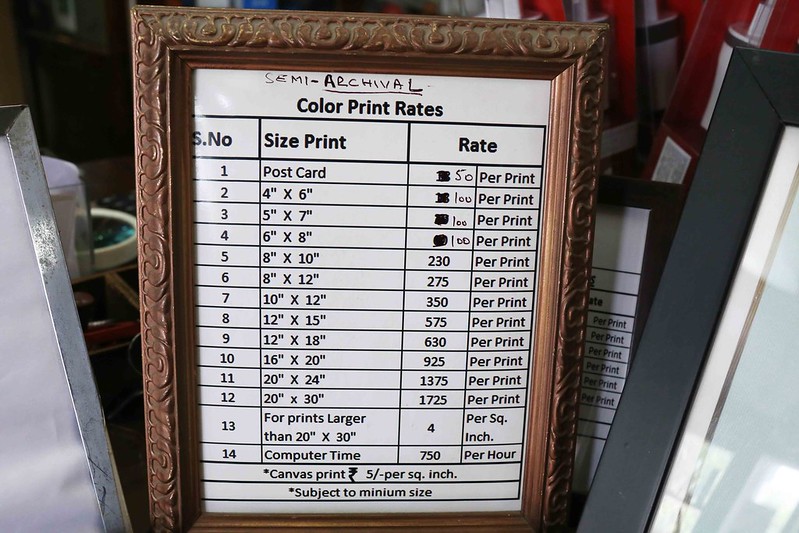 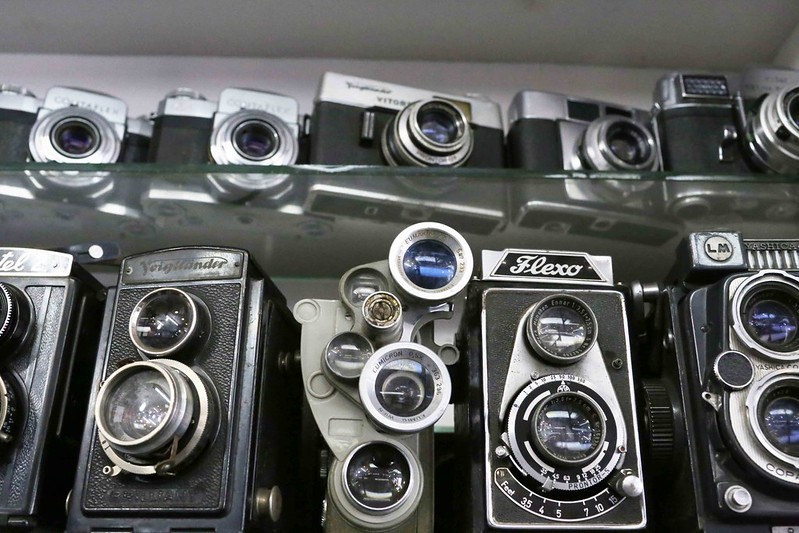