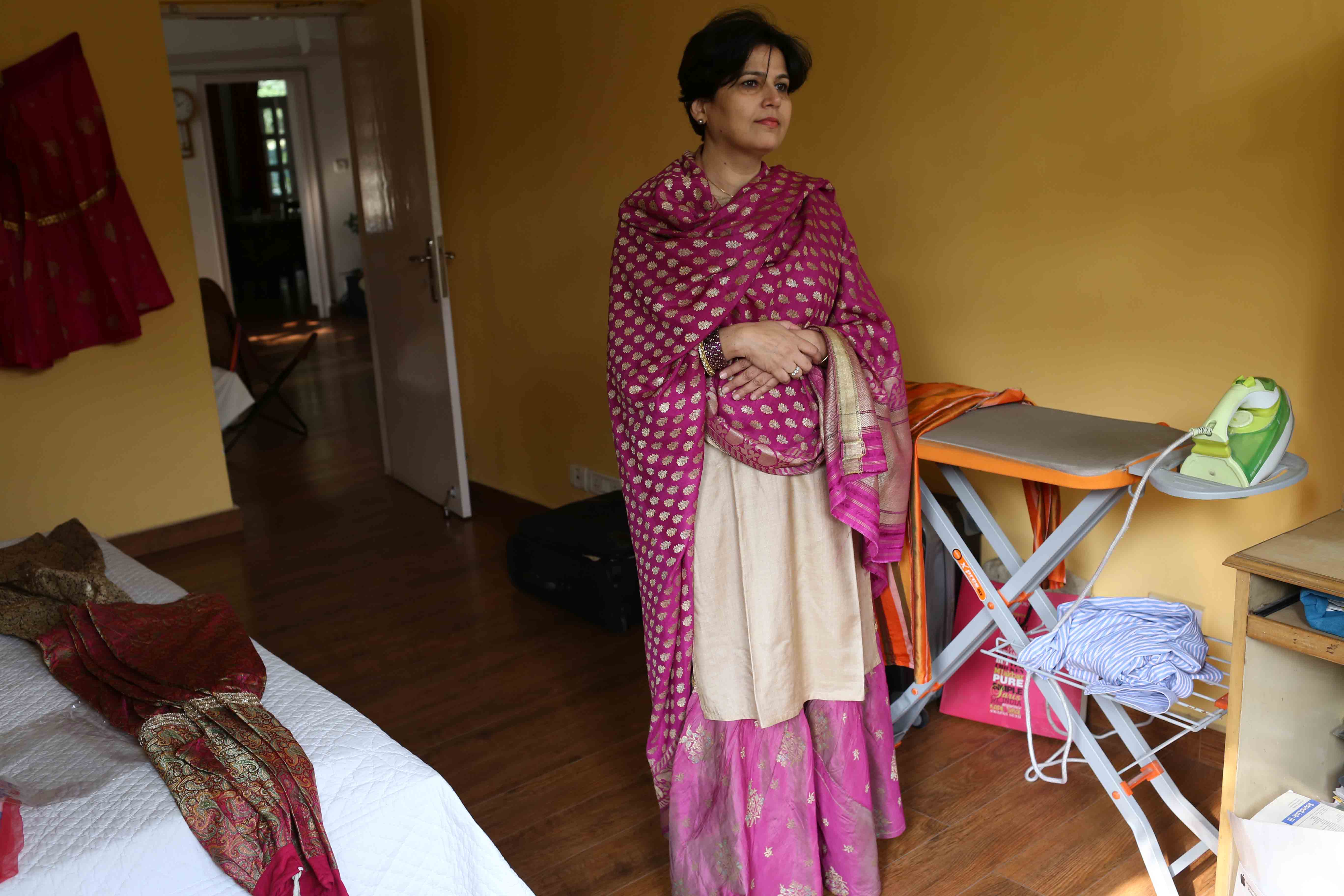 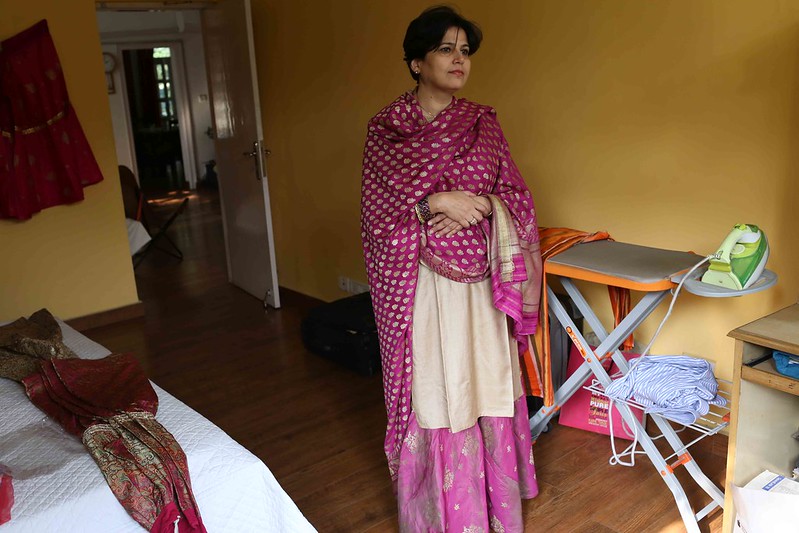 Searching for the stylish.

Strange outfit this. It’s neither a skirt, nor a gown. It’s definitely not a sari. It’s also not a pajama.

“It is gharara,” says author Rakhshanda Jalil, pronouncing the ‘gh’ in a special deep-throat voice.

The Delhi Walla is at Ms Jalil’s home in south Delhi. Her most precious wardrobe is a treasure-house of about two dozen ghararas. Most have come down to her from her mother and mother’s mother; a few are even older.

Indeed, Ms Jalil has a fascination for souvenirs of the past. One of her many books is the beautifully titled Invisible City: The Hidden Monuments of Delhi. These ghararas, too, are fast becoming invisible. It will be a great astonishment to see a Delhi Metro commuter in a gharara, although Ms Jalil is often spotted wearing it in literary gatherings. Years ago, she had worn a hot pink gharara for her wedding. Her two young daughters also put it on during special occasions such as… well, weddings, especially Muslim ones, that too in the smaller towns in Uttar Pradesh, where more people are likely to be similarly attired.

It is not unusual in Delhi weddings to see women in gharara’s sister dresses, such as lehenga, a kind of skirt with a wide hem, and sharara, which is like flared pants with two legs. Gharara is more complicated. It has two legs but each leg is comprised of two parts. The first goes down from the waist to the knee, and the second, which is much wider, begins from the knee and descends down to the foot.

Truth to be told, Ms Jalil prefers saris and trousers for her ordinary wear. But it was the daily costume of her maternal grandmother, Zahida Suroor, who lived in the nearby university town of Aligarh. “In my grandmother’s time, it was common for women to wear cotton ghararas made of chintz (called chheent by Urdu speakers) at home,” says, Ms Jalil. “Silk or satin ghararas were worn on formal occasions. And the heavy brocades, called kamkhaab, were worn at weddings.”

Each gharara should have its own set of kameez and dupatta, though these days one has more liberty to do a happy mix and match. Ms Jalil gets away with it. She says that traditionally an entire gharara could be sewn in four or five days. Each piece was stitched by hands. The entire hem was turned in with tiny invisible stitches. Sparkling bits of gold lace were tagged to camouflage the joints at the knees.

Ms Jalil’s mother, Mehjabeen Jalil, recently hand-stitched a red gharara for her. The happy daughter had a trial run at a dinner in her own home. There was much applause. The gharara came with a short white shirt. The red dupatta was lined with gold frills.

In the old days, women of a family gathered together to sew a gharara if it had to be made for, say, a bride’s trousseau. Neighbors and friends also chipped in. Opinions were eagerly sought on the design, and the leftover cloth was never thrown away. It was instead used to make an accompanying batua (wallet), or jootis (sandals), or even juzdan, the elaborate wrap for the Holy Quran.

There was a time when a few cities were known to make special types of ghararas, says Ms Jalil. Benares was famous for its brocade ghararas where master-weavers painstakingly transported the exact design of the dress’s heavy brocade onto a lighter gauzier material for the accompanying dupatta. Lucknow was favored for patchwork designs called chatapati. Our own Delhi specialized in something called ‘farshi’. It used to have a long train, which the women were supposed to hold delicately in their arms.

Perhaps the most ideal way to study this old-world costume is to ask the wearer to sit still. On request, Ms Jalil settles down beside a window with an Eric Segal novel. While the book belongs to her elder daughter, Aaliya, the gharara belongs to her mother’s mother’s mother. Made of atlas (no relation to the book of maps), the fabric is so fragile that it tears at the slightest tug. It has a blue background with yellow, orange and pink flowers. At one point, Ms Jalil looks out of the window. Her gharara then ceases being a dying tradition, and seems as much a part of her present as her own heartbeat.

This dress should not die 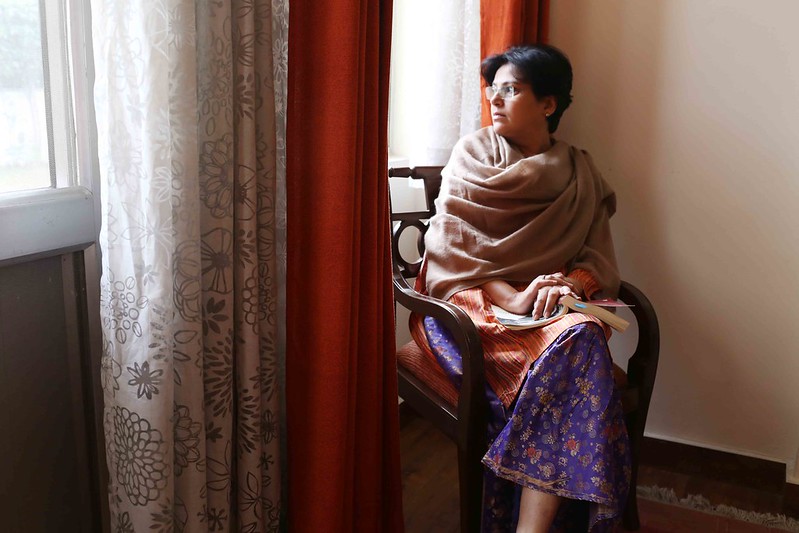 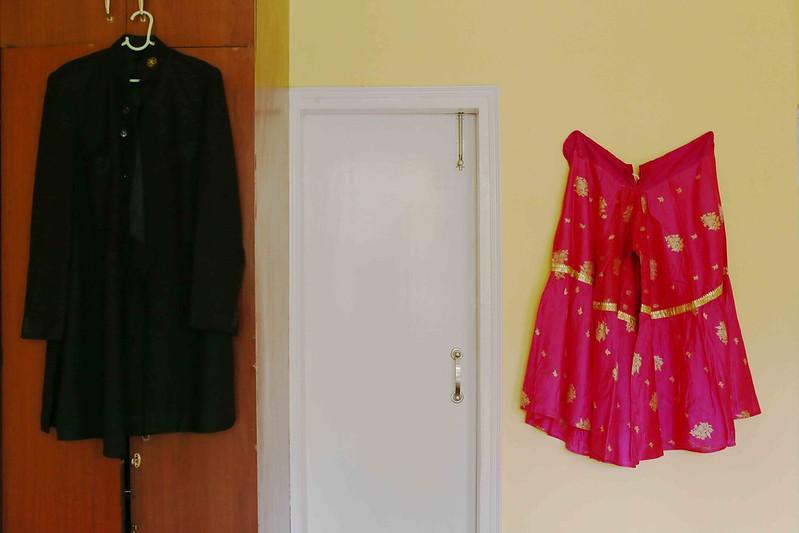 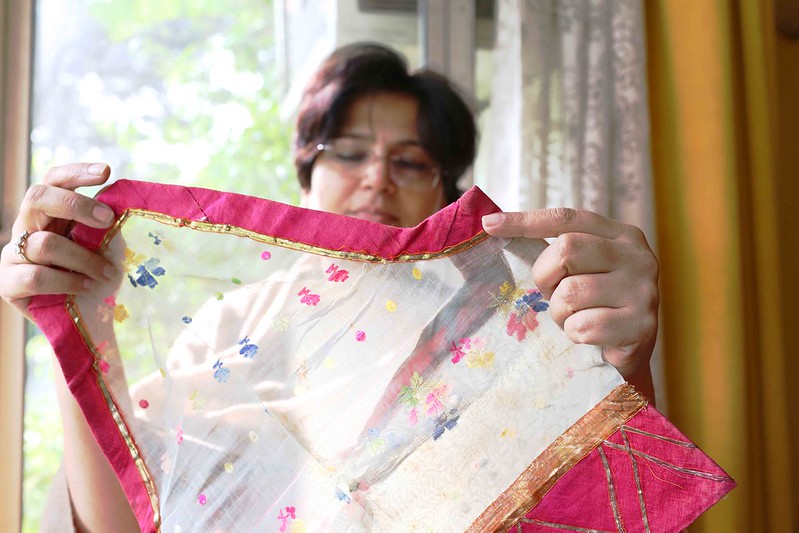 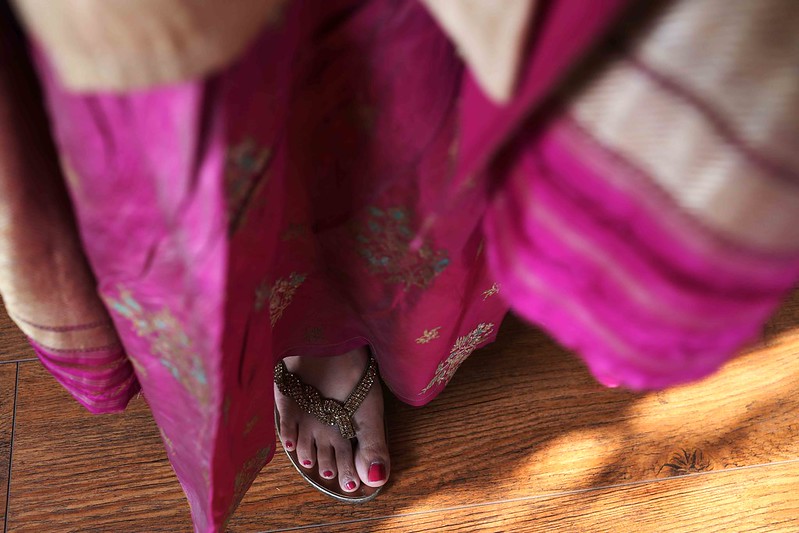 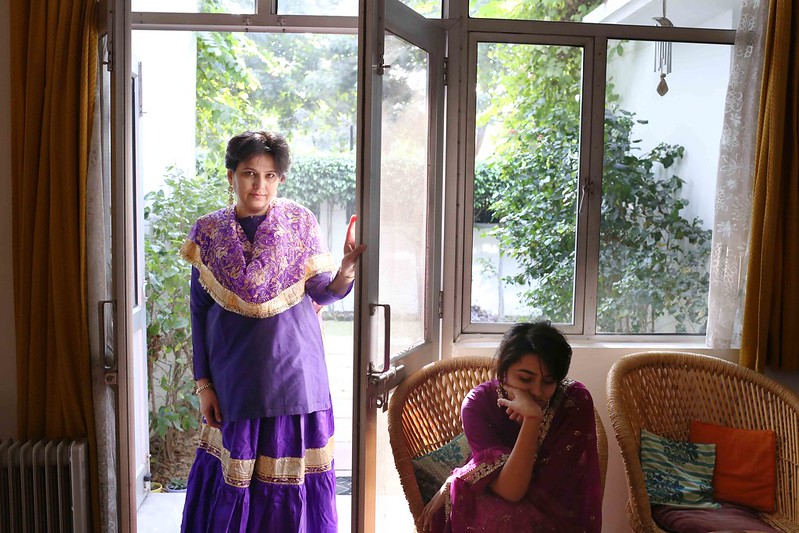 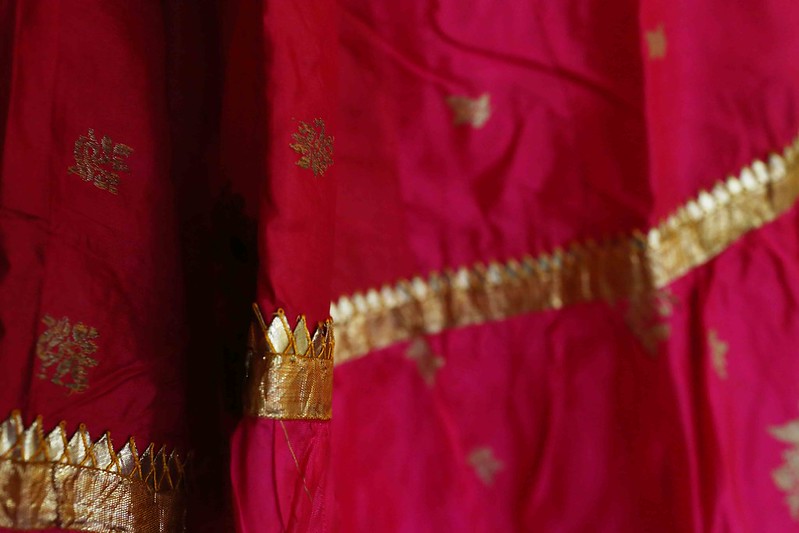 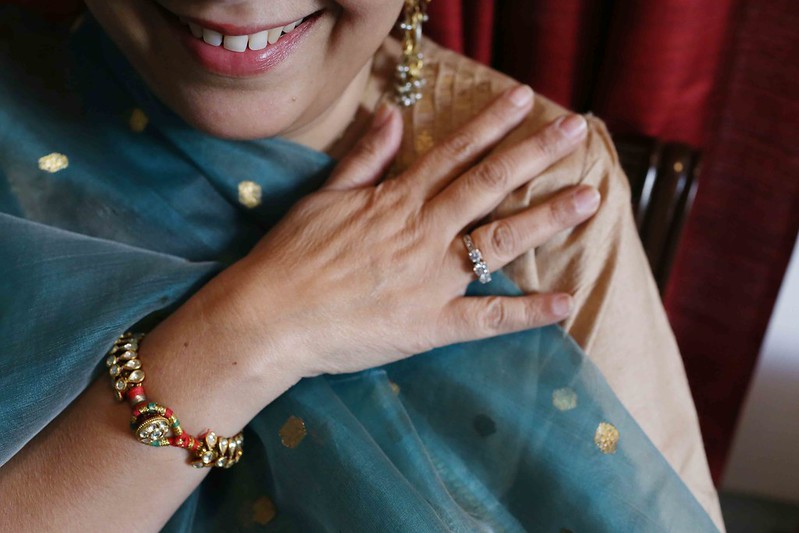 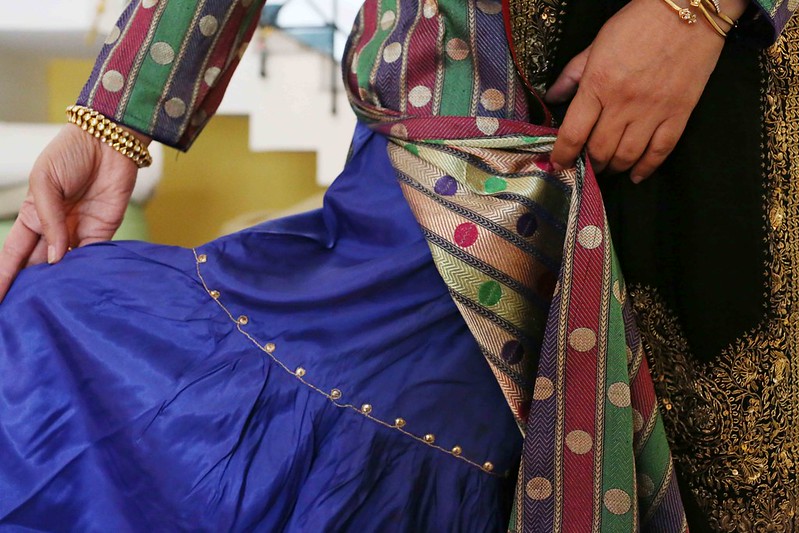 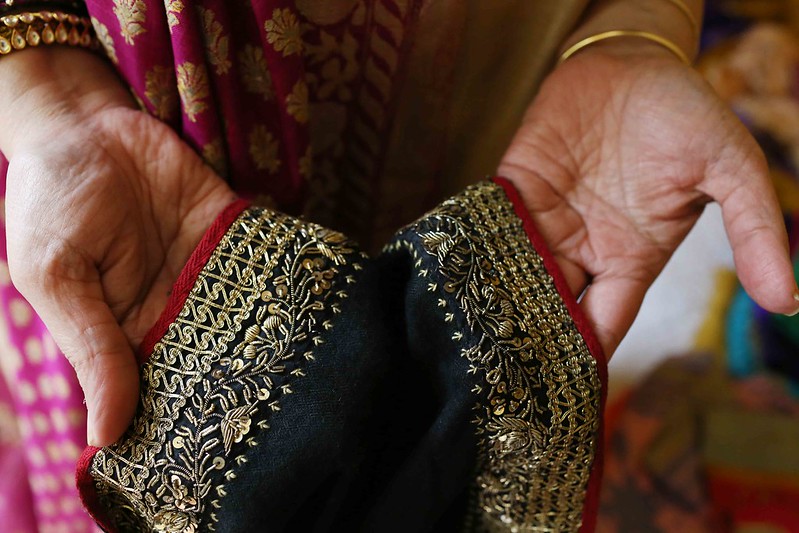 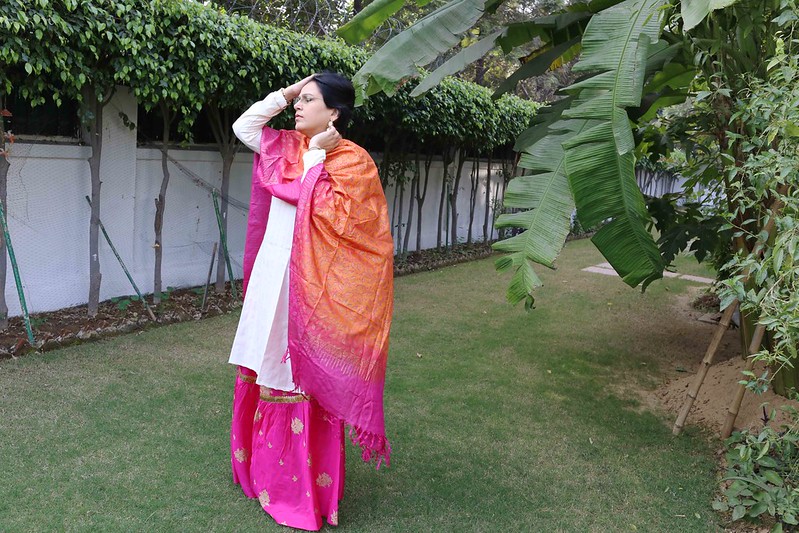 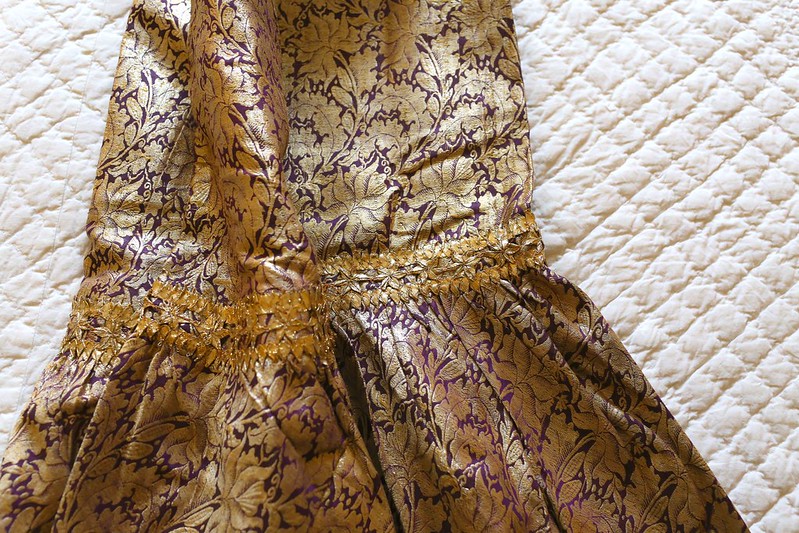 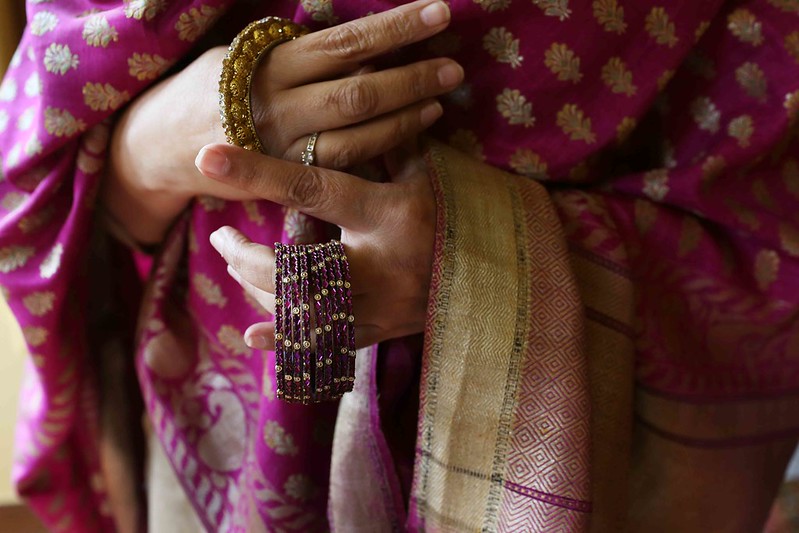 14. (Rakhshanda Jalil with her wedding gharara) 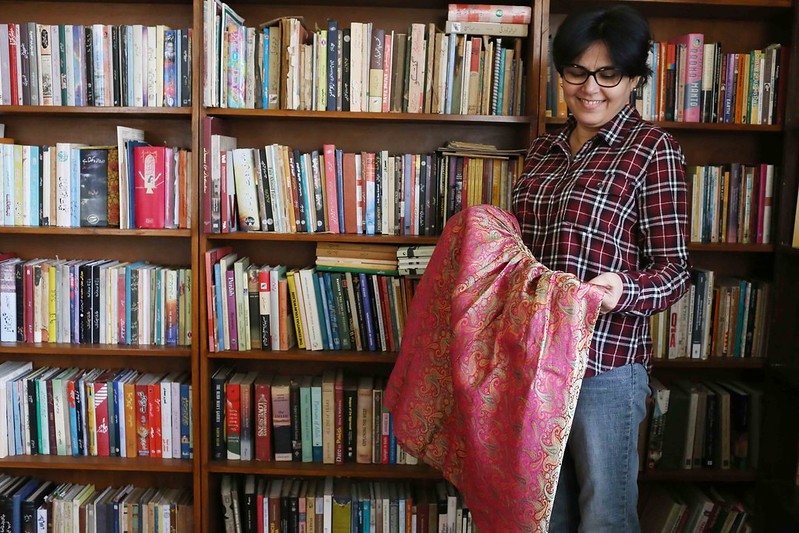