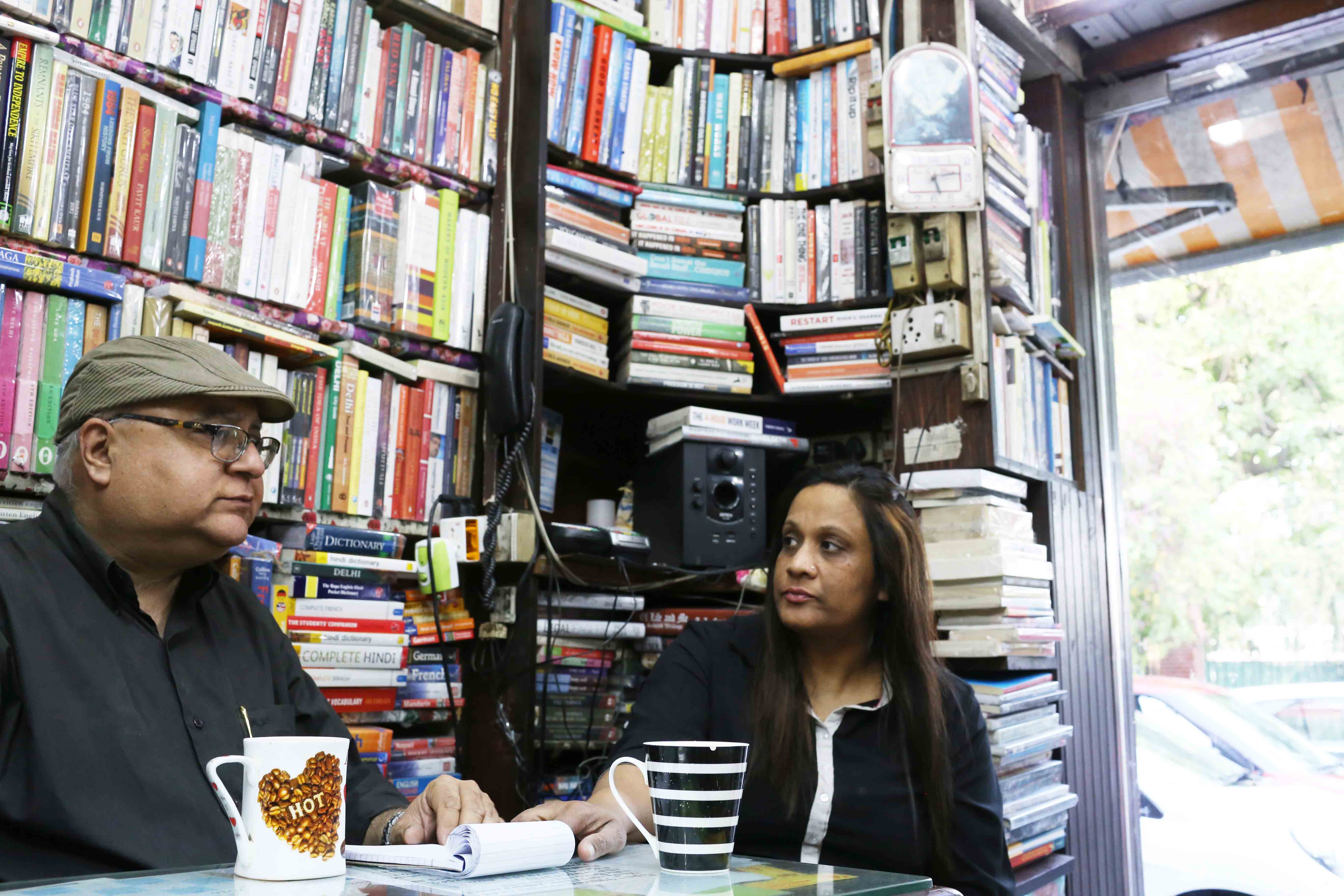 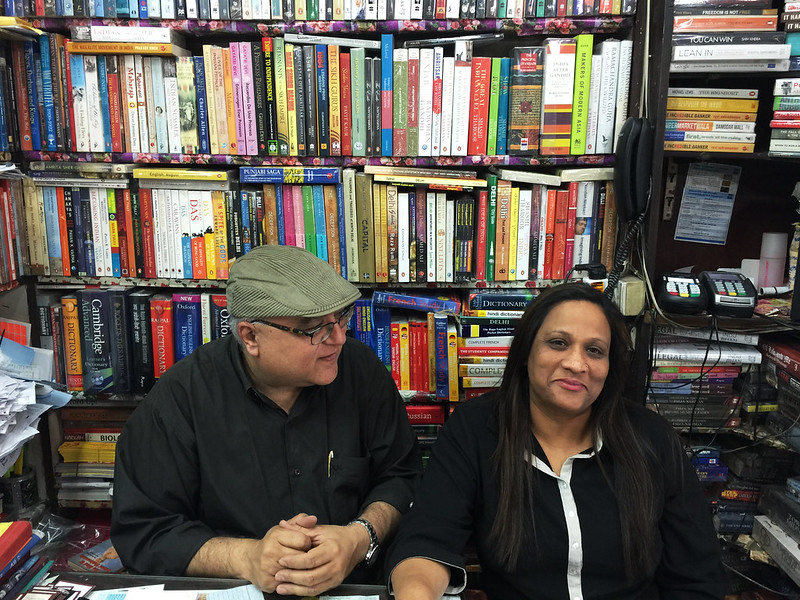 Not just another bookshop.

Historian Romila Thapar has visited this old family run bookshop in Khan Market. Author Gita Mehta talked of it in her book Snakes And Ladders: Glimpses Of Modern India. Late poet Kamala Das would walk down to this shop in the evenings from her home in nearby Rabindra Nagar. This is Faqir Chand and Sons, a mom-and-pop shop around the corner.

Drop by any afternoon and you’ll see Mamta Marwah and her husband, Anup Kumar, seated behind the counter. The bookshop is like an extension of their home. A Thermos containing ginger chai is on the desk, along with a box of home-made namak-paare. The shop has only two staffers—Suresh Yadav, who can often be seen putting plastic covers on the new hardbounds, and Deepa Tamta, who doubles up as a cook in the Marwah household. The couple’s teenage son, Abhinav, also pitches in. Until a year ago, 75-year-old Uma Marwah used to be at the shop too, but she is currently recovering from a leg injury. The shop’s matriarch, she is one of the last remaining links to Khan Market’s early history.

For Balraj Bahri Malhotra, the founder of Khan Market’s iconic Bahrisons Booksellers, died in March 2016. Although age had forced him to give up active work, he could often be seen seated in his busy shop in the evenings. With arms folded across his broad chest, he would quietly watch the goings-on.

The Khan Market of little shops from where he built an empire (there are two other outlets of Bahrisons in Delhi) has changed completely. Most of the initial stores here are history. Today, this is a high street of premium brands.

In this, Khan Market mirrors the story of places the world over that have successfully adapted to stay relevant in rapidly changing times. Somewhat miraculously, however, a few of those first shops still survive. They haven’t been celebrated by our chroniclers as much as Bahrisons, but they are as central to the story of what has become one of India’s most expensive shopping destinations.

Apart from Bahrisons, only two of the initial stores still stand in their original form in the market’s prized front lane—Anand Stationers and Faqir Chand (a few more of the early landmarks exist in the back lane). Most shop owners have either sold or rented their properties. Among the three survivors, Faqir Chand is special in one respect. While the Bahris live in south Delhi’s Safdarjung Enclave and the Seth family of Anand Stationers in Lajpat Nagar, the Marwahs of Faqir Chand live in Khan Market. When the market was founded in 1951 to rehabilitate Partition refuges, it was designed to have shops downstairs and houses upstairs. Today, only seven homes survive; the rest have been turned into cafés and boutiques. The Marwahs live at No.59.

Faqir Chand started as the Oriental Book Shop in Peshawar Cantonment in 1931. The owner moved to Delhi following Partition and set up the same kind of bookshop in Khan Market—but named it after himself.

Faqir Chand died in 1985; his framed portrait graces a corner of the shop. On the opposite side is a portrait of his son, Ram Lubhaya. Mamta, who is Ram Lubhaya’s only child, married lawyer Anup Kumar just four months before her father’s death, in 1992. Kumar soon quit his legal practice to assist his wife and mother-in-law, Uma, at the bookshop. Between them, they have managed to keep the place running. But all around them, Khan Market’s gentrification led to the closure of the original shops one after the other. A recital of the names of those lost landmarks might sound like an elegy to regulars of a certain age group.

A Citibank ATM stands where the Tharia Ram & Sons bookshop used to be. Kama Ayurveda replaced Dr Raja Ram Chemist shop. The Nike showroom stands where the SN (photography) Studio once did. Indeed, much of Khan Market is a Then & Now story. Then Empire Store, now Good Earth home décor showroom. Then Bansal Provision Store, now Big Chill restaurant. Then Sovereign Dairy, now Oma home furnishing store. Then The Book Shop, now Swarovski. Some shop spaces have had more than one avatar. The Elegance Furniture Showroom turned into the Barista coffee shop, which gave way to a clothing shop, which briefly became Arza Bibi Kebabs, and is right now the Biotique store. All the mithai shops have given up the battle: The Bengal Sweet, Raj Sweet and Bansal Sweet Shop are gone, and so is the Tit Bit South Indian Restaurant.

Today, Khan Market, with all its multi-cuisine restaurants, doesn’t have a single place that can satisfy the craving for a simple masala dosa—though I must admit I have never heard anyone there say they are missing it. The Yadav pakoda walla, who used to supply chai and pakodas to the shops, died eight years ago. He used to sit in front of the stairs going up to the office of the Life Insurance Corp. of India. That is now Town Hall restaurant, famous for its sushi.

Until last year (2015), the market’s back lane had two meat shops—both have closed down. Both were near Bharat Hair Dresser, which is still in business. This part of the bazaar is special because it is home to Khan Market’s oldest surviving shop. Anand General Store must be declared a heritage monument—it precedes the founding of Khan Market. The store was set up by B.L. Modi in 1944 in the area that is now a car park. It is still a good old neighbourhood shop filled with mops and buckets. While this would have been a deathly dull bazaar if it had only had such shops, standing here is like being transported to the old Khan Market that most of us have never seen.

The unique thing about Bahrisons Booksellers is that it has flourished, expanded and diversified without acquiring the character of a retail chain. Its flagship store in Khan Market has a staff of 12, and each employee has cultivated a bond with the regular customers. The owners, Anuj Bahri and wife Rajni, sit in the shop daily—she near the poetry section, and he on the mezzanine floor. In the afternoon, you can see Anuj Bahri lunching on chole bhature or chowmein ordered from a nameless but popular roadside shack behind the market. Sometimes, the elder Mrs Bahri sits quietly in the shop. In such moments, Khan Market feels closer to its early years, when each shop was a self-contained family unit.

That is still true of Faqir Chand’s. On a recent afternoon, two customers were browsing through piles of paperbacks—this book store is notorious for its seemingly haphazard, non-arrangement of books. All was quiet. At the counter, owner Anup Kumar was talking softly to his wife, Mamta, about the prices of green peas and mushrooms when a woman entered asking for the “new Sunil Khilnani”. The couple moved seamlessly from the domestic to the cosmopolitan, locating the book immediately, and then moved back just as seamlessly to their conversation once the customer left.

In that exchange one saw a glimmer of Khan Market’s homelier past. 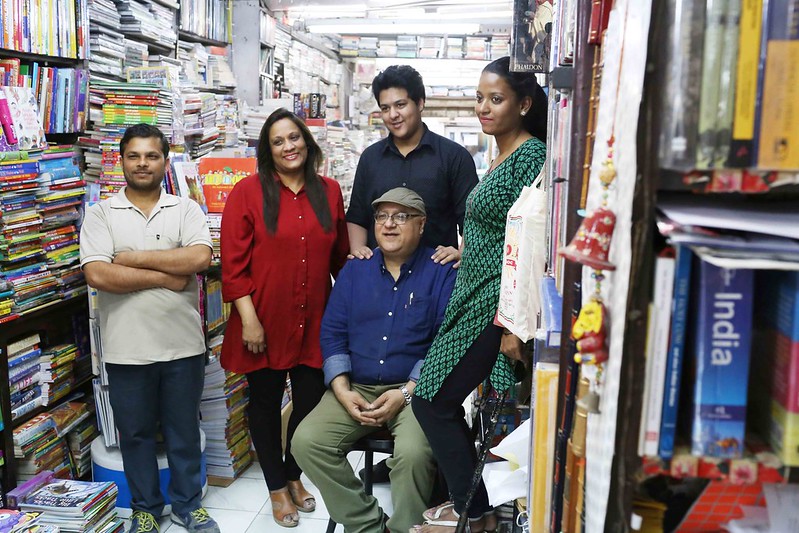 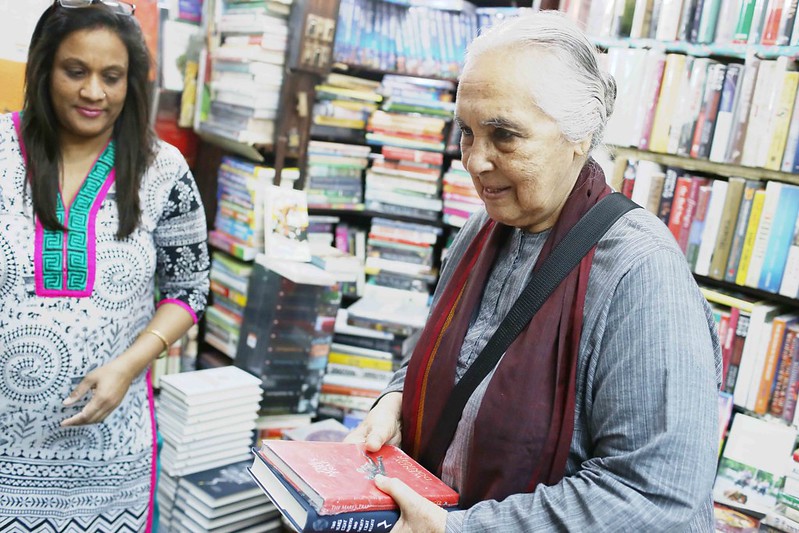 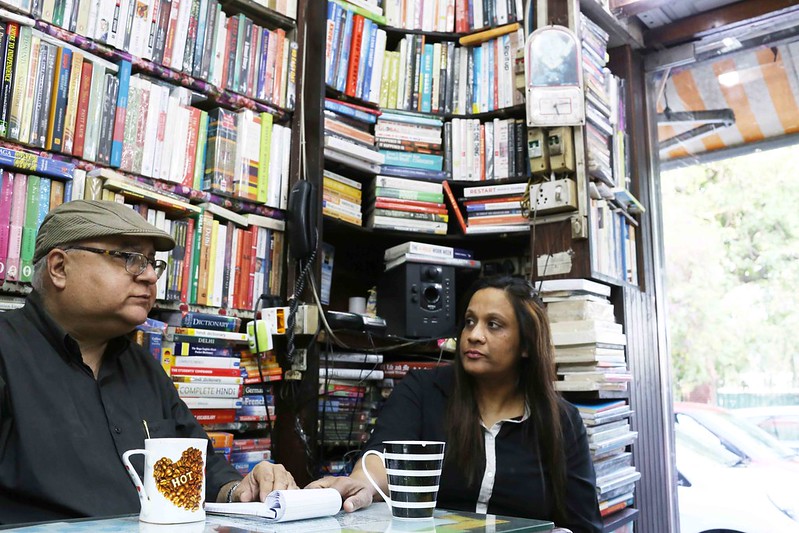 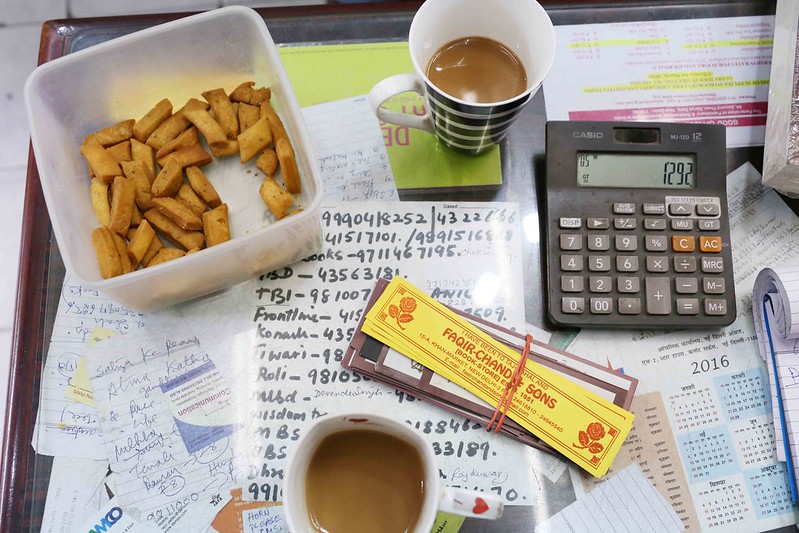 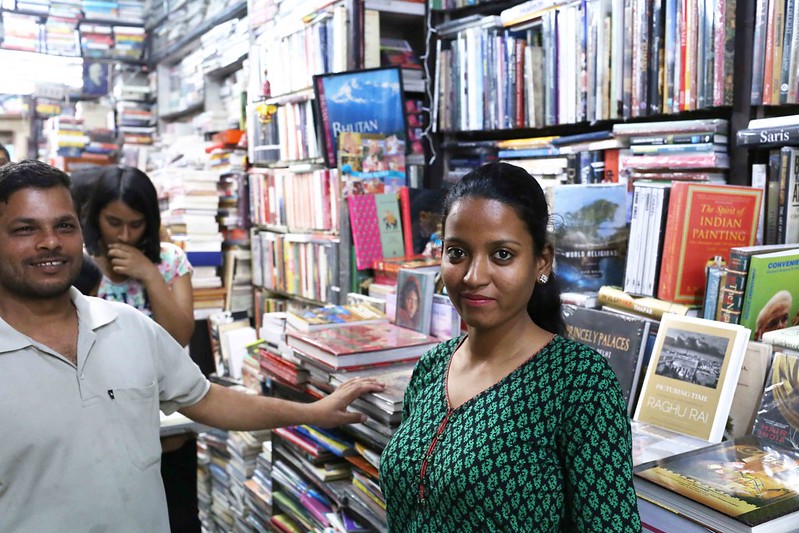 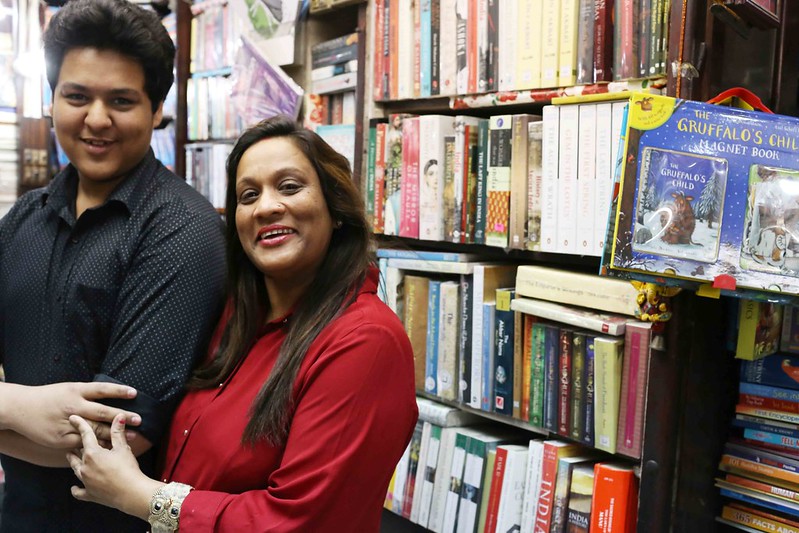 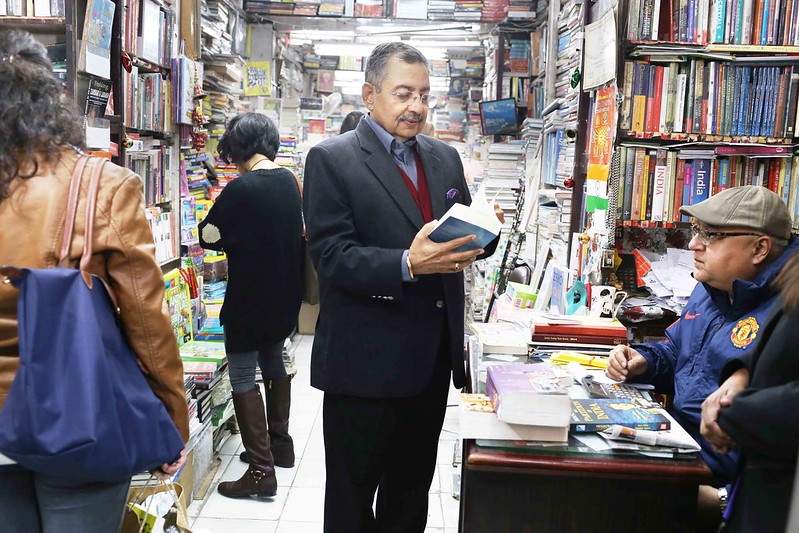 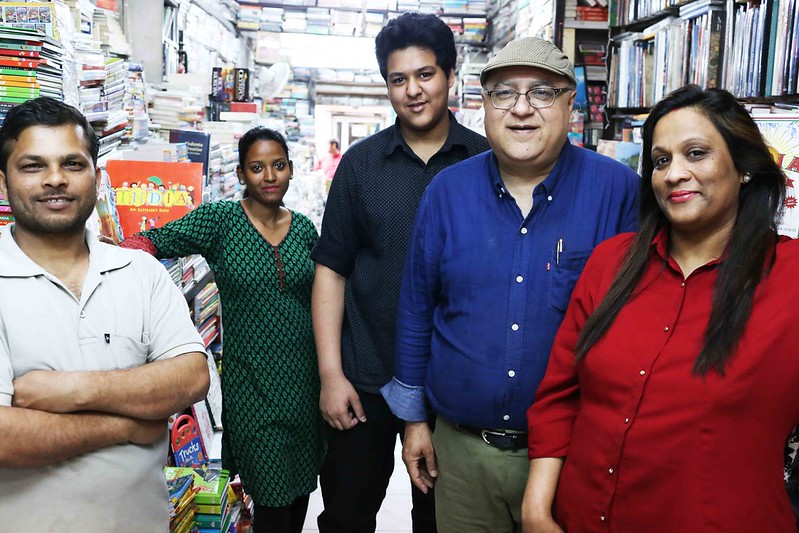