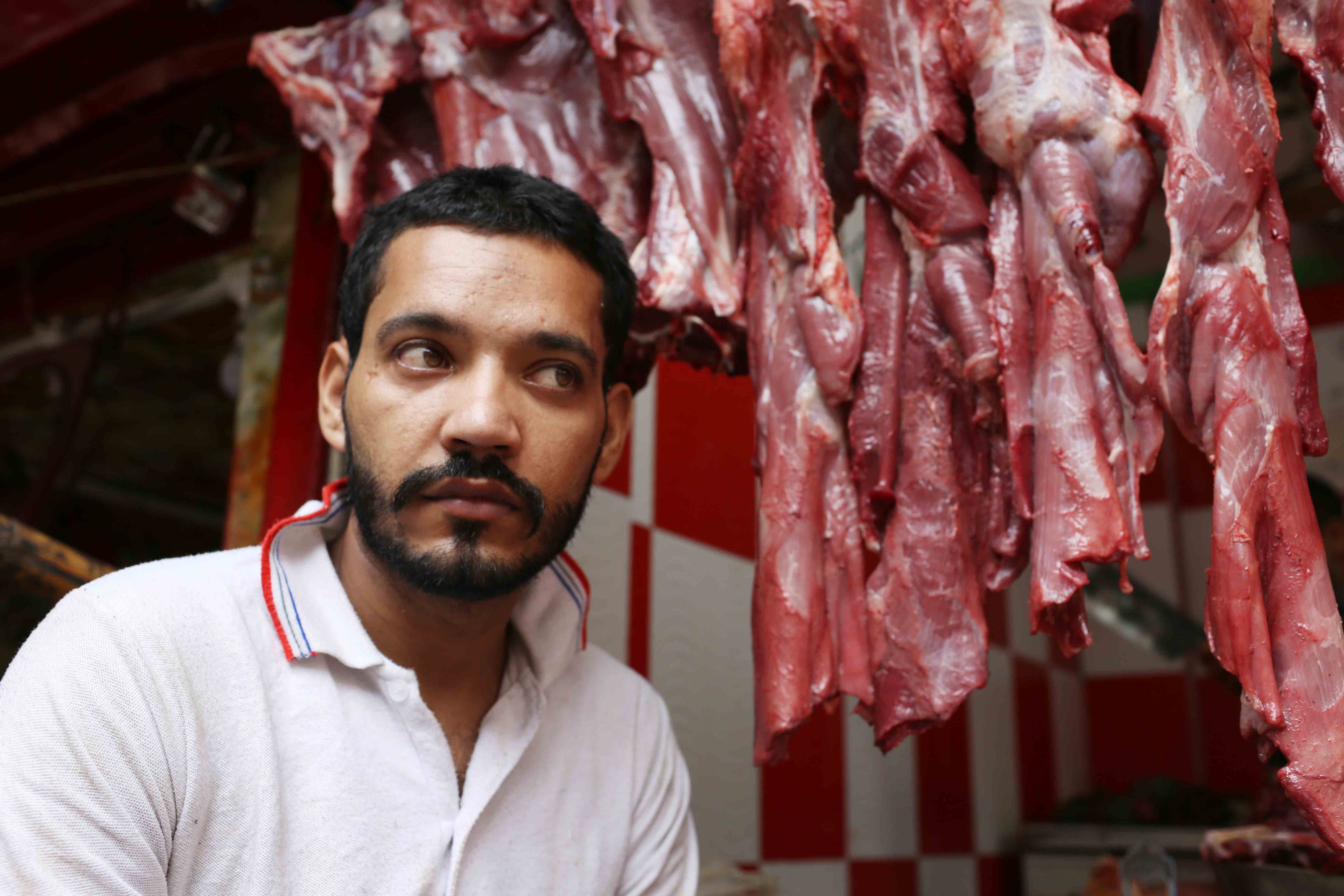 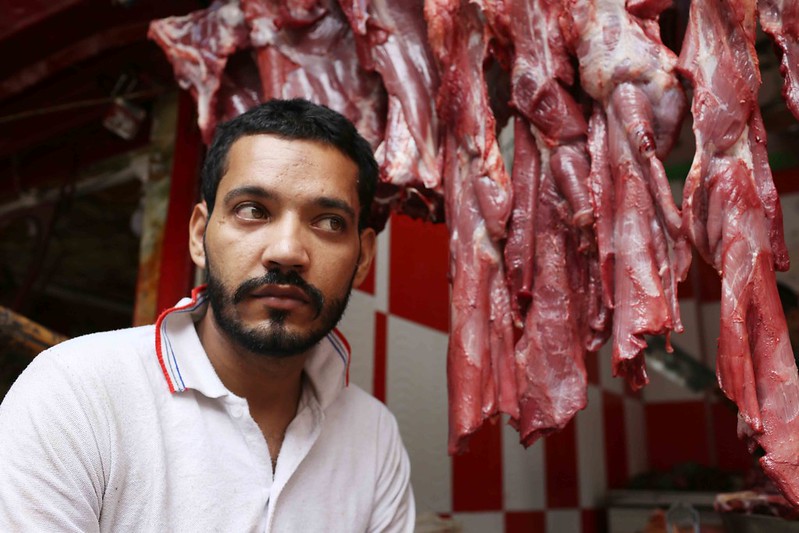 He sits in his blood-stained jeans, surrounded by chunks of meat hanging from hooks, and holds up his bloodied hands like a trophy. Next to him, a giant iron cleaver lies on a massive tree stump. One can well imagine Muhammed Irfan Qureshi as a fearsome figure from a vegetarian’s nightmare.

Mr Qureshi, who is in his mid-20s, is a butcher in the congested Turkman Gate Bazaar in Old Delhi. His family has been in the profession for generations, but he dreams of a future without the butcher’s knife.

For the moment, Mr Qureshi has been forced to worry about the profession he was born into. “I’m scared they may ban meat in Delhi, too,” he says, feeling rattled these days by the unrest over meat. Not long ago a Muslim man in a village just outside Delhi was lynched by a Hindu mob for keeping meat in his refrigerator. There have been instances in India when local governments ban meat sale during Hindu or Jain festivals. “What will we eat if butchery is snatched away from us?” says Mr Qureshi. “This is our business, our only talent.”

That’s not really true, however, of this butcher. A quick scan of his mobile phone offers glimpses of his dancing and acting skills. He has also done a bit of modelling, walking the ramp in fashion shows.

Sitting in the serene courtyard of the white-marble Faiz Ilahi Masjid in Turkman Gate, Mr Qureshi says, “I want to either star in a TV reality show or work as a reporter in a TV news channel.” He is studying mass communications and medieval history at Delhi University’s Zakir Husain College.

For Mr Qureshi, the fourth-eldest among six sisters and two brothers, the day begins early, as it does for any butcher in the Walled City. He sells only burra, or buffalo meat.

Old Delhi, in fact, has distinct markets for different meats. Mutton shops line the Urdu Bazaar outside the Jama Masjid. Burra stalls are found in great numbers in Kala Mahal, Turkman Gate and especially Rakab Ganj, which is just behind the historical Delite cinema hall. There is a big chicken market on Nawab Road, near Idgah. That said, almost every lane has a neighbourhood shop selling mutton or burra.

Chicken vendors often pedal through the lanes with tightly packed bird cages fixed on cycle carriers; some sit alongside other pavement businesses. A barber’s salon outside the Sufi shrine of Mirza Mazhar Jan-e-Janan Shaheed shares the space with a chicken stall. Jawed Qureshi, who runs a chicken shop, says that at least in Delhi, butchers have never been threatened with meat bans.

But Sirajuddin Qureshi, president of the All India Jamiat-ul-Quresh, a nation-wide body of meat traders and exporters, is concerned. “Today they are talking about banning bulls, tomorrow they may talk about banning the buffaloes, the day after tomorrow, it might be the turn of the goats and then the poultry.” I met Sirajuddin at his plush office at the India Islamic Cultural Centre, which he heads as its president. After 50 years in the Walled City, Sirajuddin now lives in south Delhi’s Maharani Bagh. He says the Capital has about 5,000 butchers, 90% of whom are from the Qureshi community. It’s hard to find out the exact number of meat shops in Old Delhi but a few owners I talked to put the figure at around 150.

Mr Qureshi, who lives near Ramlila Maidan, is at his shop by 7 in the morning. That is the time when he gets the day’s delivery of meat. The buffalo meat travels a long distance before reaching Old Delhi. It is a surreal journey. Buffaloes are driven on trucks to Delhi a night earlier, mostly from a mandi (market) in the nearby town of Hapur, though cattle also arrive from Rajasthan and Haryana. They are then herded into an abattoir in east Delhi’s Ghazipur, which has facilities for mechanized slaughter.

Each buffalo is cut into two parts—raan is the animal’s lower portion and duss the upper. The meat is transported in mini-trucks and vans to different parts of the Capital. Old Delhi gets its share in Rakab Ganj. There, daily-wage labourers haul the meat on pull carts and rickshaws to meat shops. Anyone who has ever walked early morning down the still-empty streets of Old Delhi will be able to tell you about the scrawny lungi-clad labourers carrying giant slabs of raw meat on their bare shoulders.

By 8am, Mr Qureshi is cutting and slicing meat for customers.

“My mother does not like this work,” he says. “She wanted me to do job (sic) where I could sit in an air-conditioned office. But I have too many sisters and responsibilities.” Mr Qureshi’s eldest sister is married to a butcher in Kasabpura, a neighbourhood in Old Delhi’s Idgah, which is home to a large number of people from this profession. Idgah housed a century-old abattoir where all the animals in Delhi used to be slaughtered, manually. It was eventually closed after the opening of the more hygienic, machine-operated abattoir in Ghazipur in December 2008.

Mr Qureshi’s sisters stay at home. So does his father, only stepping out on Bakr Eid to ritually slaughter goats in homes. Mr Qureshi’s two younger brothers work at the shop. The youngest, a class IX student, recently stopped going to school. Mr Qureshi says theirs is such a demanding profession that butchers rarely think of their children’s education.

But he is that rare butcher who not only finished school but went beyond it. “My college gave me confidence,” he says. Mr Qureshi was Mr Fresher in the class of 2011. But it was impossible to focus only on college life. Work still took up time.

While there are a few butchers who have built up relatively big businesses, Mr Qureshi’s is a typical subsistence-level meat shop. He would work in the shop from morning to afternoon and then rush home, wash and change, and go for classes, held from 4pm. He was the ubiquitous backbencher. He wore stylish clothes, played cricket at zonal tournaments, and it was under his leadership last year as “fashion co-coordinator”, he says, that his college made its fashion show debut, at an event in Hindu College. Mr Qureshi called his team “Choclatey Boys and Girls”. He shaved his chest and got it smeared with chocolate-marked kisses. His team didn’t win.

Very few of his college friends knew about Mr Qureshi’s profession. “Some of them stopped speaking to me when they got to know about it,” he says.

Mr Qureshi supplements the family income by collecting discarded bones from Old Delhi’s meat shops and selling them to dealers in Rakab Ganj; the bones are sent to traders in Hapur, for use in artificial jewellery. Every afternoon, Mr Qureshi takes off on a pull cart, visiting shops in the neighbourhood. Sometimes, he hires a man to draw the cart; on other days, he pulls it himself.

Today, concerned about the meat ban controversy, he is making plans to escape from his “meat line”. He flunked his third-year medieval history exam, so the college degree is still out of reach. But he is working steadily on self-improvement. A few months ago, he took up a short English-speaking course at an institute in east Delhi’s Laxmi Nagar and tried for a “call-centre job” in Gurgaon, adjacent to the Capital—he was eliminated in the last interview round.

He is now pinning his hopes on the next edition of the reality show MTV Roadies. He didn’t make it last year but hopes to be better prepared this year. Every Friday, when all meat shops are closed in Old Delhi, he goes to the 14th century ruins of Feroz Shah Kotla to hone his speech delivery. There is a demo video of it on his mobile phone.

One afternoon, Mr Qureshi is chatting with a schoolteacher who has come to buy burra, which costs 170 rupees a kilogram. She does not have enough cash with her. “No problem, madamji… give me later.” When she leaves, Mr Qureshi taps the cleaver on the tree stump on which he cuts the meat.“I got this muddi (trunk) from Kasabpura a year ago for 3,000 rupees. Every day, it shrinks a little from all the cutting and chopping. I think I will need a new muddi after three years. By then, I must be away from here,” he says.

[This is the 117th portrait of Mission Delhi project] 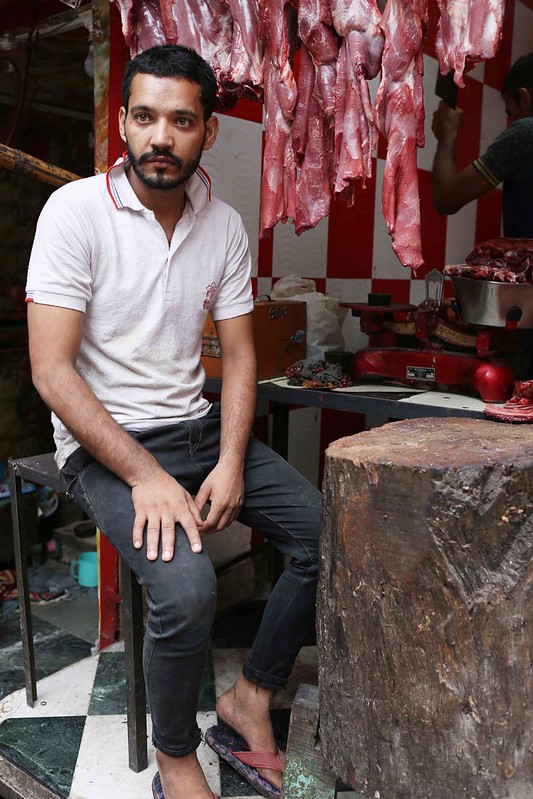 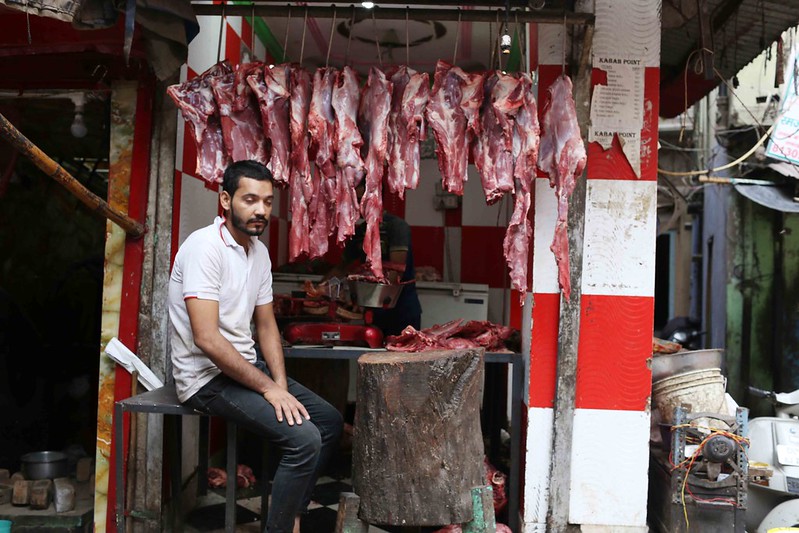 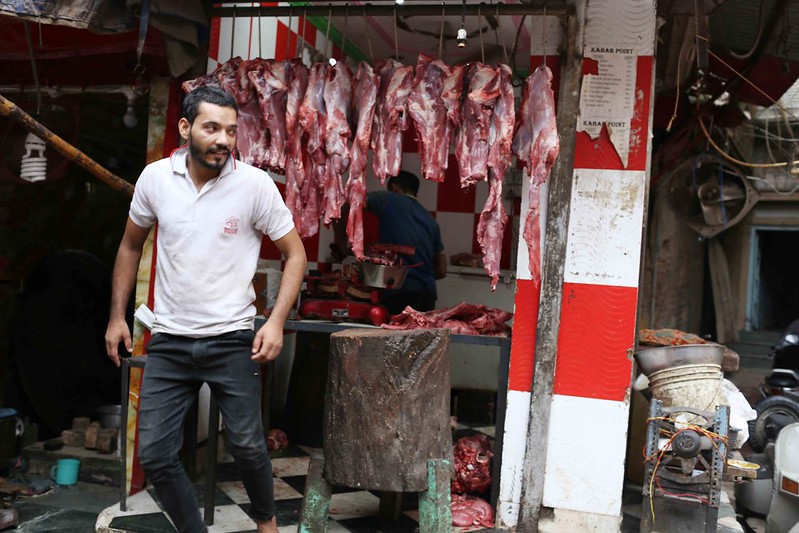