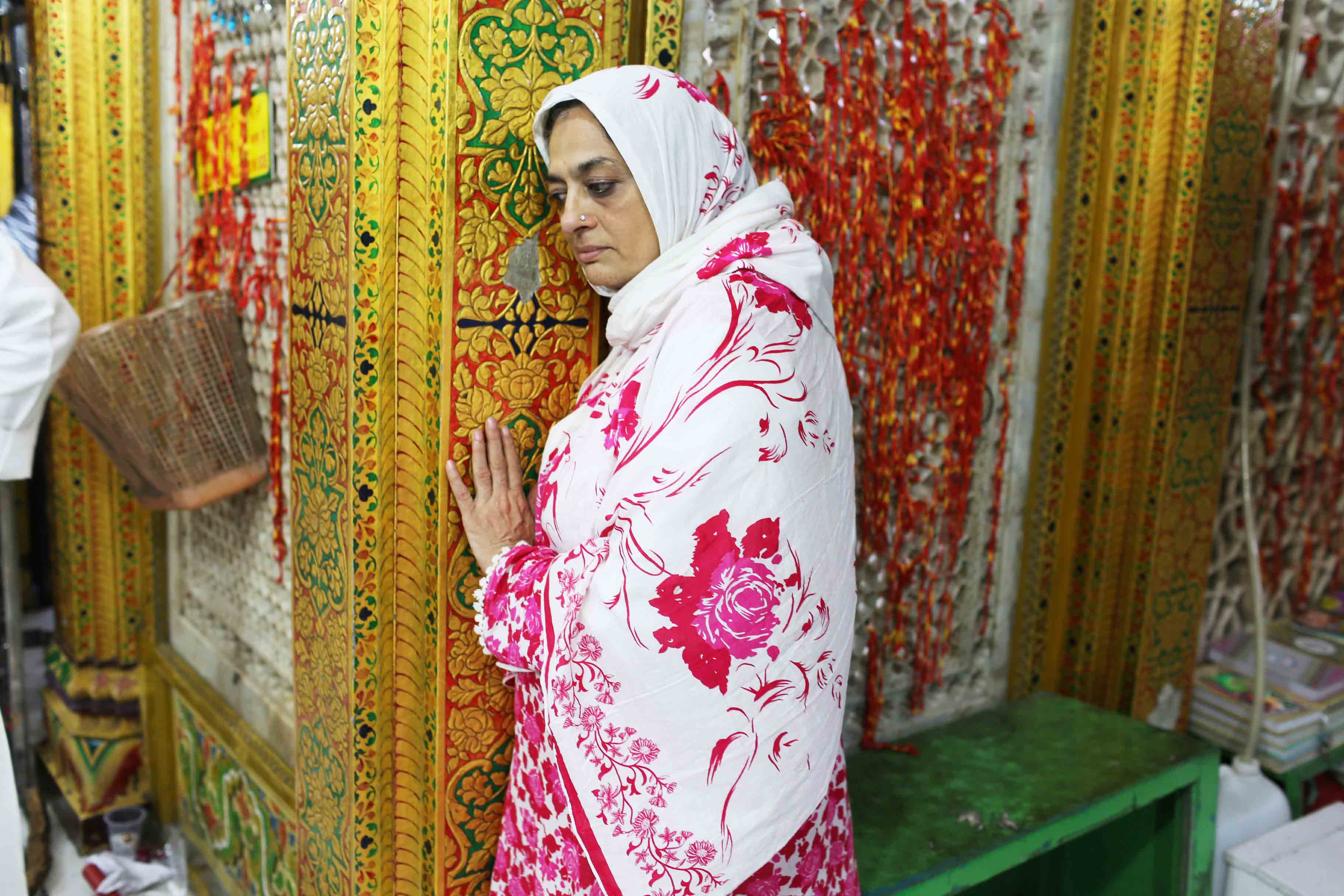 City List – Sufi Shrines Where Women Are Allowed, Around Town 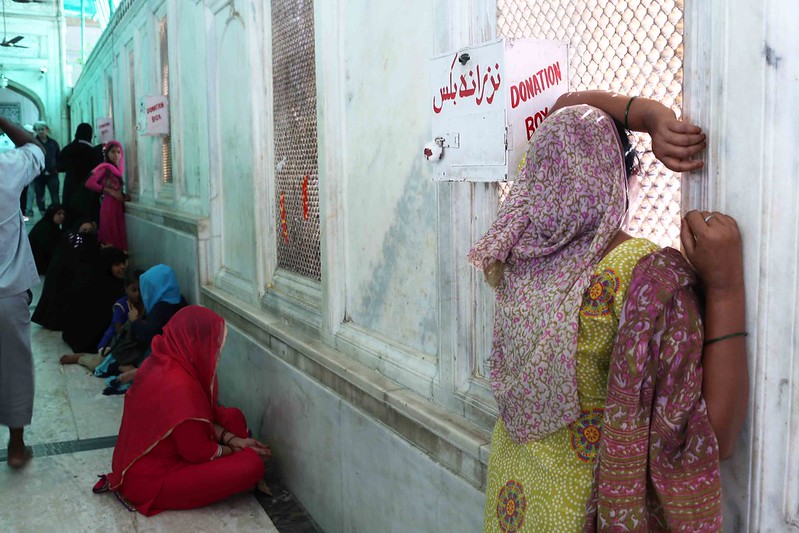 “Ladies are not allowed inside.”

This notice on a yellow board hangs outside the burial chamber of Sufi saint Hazrat Nizamuddin Auliya. The shrine is one of the many dargahs in Delhi, a city also known as Bais khwaja ki chaukhat, or the threshold of the 22 Sufis.

In August 2016, the Bombay high court put an end to exactly such exclusion at the Sufi shrine of Bombay’s Haji Ali Dargah. The verdict called for women to be “permitted to enter the sanctum sanctorum at par with men”. The court stayed the order for six weeks to allow the shrine authorities to file an appeal in the Supreme Court.

Delhi’s Hazrat Nizamuddin shrine still has the board. For hundreds of years, women—even little girls—have not been allowed inside the sanctum sanctorum of this 14th century mausoleum, which draws devotees from across the world. If you are a woman, you can sit around the tomb’s walls, you can lounge and eat and sleep and even hurl abuses in the courtyard, but you will not be allowed to personally offer the customary red roses at the marble grave. That privilege is only for men (and eunuchs).

The shrine’s hereditary caretakers—the khadims are always men and can be identified by their white salwar suits and white caps—deny charges of prejudice. One attributed the ban to Hazrat Nizamuddin’s supposed shyness around women. Another wondered at the point of upsetting a tradition that had continued smoothly for centuries. And a young radical khadim conspiratorially asked me to file a case in the Delhi high court.

It’s the same in the Capital’s two other Sufi shrines: the Chiragh-e-Delhi dargah near the Greater Kailash area and Khwaja Qutbuddin Bakhtiyar Kaki’s dargah in Mehrauli. The patron saint of the latter precedes Hazrat Nizamuddin in the Chishti line of Sufism, an order that was established by Moinuddin Chishti in Ajmer—there, incidentally, women are allowed to go up to Chishti’s grave.

So it’s ironic that the only book on the city’s Sufi shrines is authored by a woman—Sadia Dehlvi’s The Sufi Courtyard: Dargahs Of Delhi (2012).

What’s more, Delhi also has a rare shrine devoted to a woman Sufi saint—there is no bar on women there. Indeed, there are quite a few shrines in the city where women do enjoy the same rights as men. There’s also one obscure shrine that bars entry to… well, men. The Delhi Walla presents you a list of women-friendly Sufi shrines in the city.

This is the city’s quietest and cleanest Sufi shrine. It lies in the heart of Kaka Nagar, a residential enclave near Khan Market where senior government officers live in a privileged cocoon of green trees and empty lanes. The dargah is even more soothing. It’s never crowded, and you will never see beggars either. The shrine has an ornate roof. The sight of gleaming marble is broken only by carpets, curtains and chandeliers. Situated within a mile of Hazrat Nizamuddin’s dargah, this shrine is devoted to a woman mystic saint.

Sadly, not much is known about Bibi Fatima Sam. Unlike most other Sufi saints, the details of her life have barely been recorded. In her book on the city’s dargahs, Ms Dehlvi writes of Hazrat Nizamuddin describing Bibi Fatima Sam in glowing terms: “When a lion emerges out of the forest, nobody asks if it is male or female; the children of Adam must obey and show respect to all human beings, whether male or female. I have met her and she was a great woman.”

Until some years ago, the dargah merely had a ramshackle roof that barely covered the grave. It received its present home thanks to the generous efforts of Muhammed Adil, a businessman devotee from Old Delhi’s Daryaganj who commissioned the beautiful building. It is open all hours of the day and night.

This Sufi shrine is also devoted to a woman. As the name clearly suggests, it celebrates a mother. A khadim at the dargah says Bibi Zulekha arrived in Delhi as a young widow with a daughter and a son who would come to be known as Hazrat Nizamuddin Auliya.

It is said the family lived in great poverty. Bibi Zulekha died in 1250 and was buried where she lived. Today, her burial place lies in south Delhi’s labyrinthine Adchini village. The Indian Institute of Technology, Delhi, is a 5-minute-walk away but that world of competitive engineering students feels a solar system away from the shrine’s meditative aloofness.

The sanctum sanctorum has a silver-plated door. There are two graves inside—the smaller one is of Mai Sahiba’s daughter, Bibi Jannat. Try to visit on a Wednesday. It is said that whatever you wish for on this day comes true.

This Sufi enclosure practises reverse discrimination. It does not allow entry to men. Daiji’s Dargah is a small tomb-chamber situated within the premises of the Sufi shrine of Khwaja Qutbuddin Bakhtiyar Kaki in south Delhi’s Mehrauli.

Believed to be a memorial to Bibi Hambal Daiji, Qutubuddin’s wet-nurse, this small chamber lies in one corner of Qutubuddin’s sprawling shrine and is easy to miss if you are not looking for it—there is no signboard. I was not allowed to enter the tomb (so unfair!) but I did glimpse half a dozen women seated quietly around the grave.

These women, however, cannot enter Hazrat Qutubuddin’s grand tomb, which is situated in the centre of a lovely courtyard filled with dozens of graves that look like the ripples of a wave. Women can view the same scene through a stone jaali (latticework).

Almost everything in the shrine is red—the walls, the door, the roof. The shrine itself lies just outside the Red Fort-facing side of the red sandstone Jama Masjid.

The colour of Hazrat Sarmad Shaheed’s dargah was inspired by his life. He was executed by Mughal emperor Aurangzeb in 1660—one reason was Sarmad’s refusal to wear clothes. He was a naked fakir—the cover of a booklet sold at the dargah stall shows him sitting cross-legged without a single garment on his emaciated figure.

The shrine should be visited by anyone—man or woman—who yearns to escape the city.

The entire dargah is half the size of a Delhi Metro coach but it’s totally isolated from the raucous world of Old Delhi. A neem tree, growing at the centre, emerges upwards into the sky through a circular opening in the roof. There is also an old well—look for the man who draws water from it. He stores it in his mashaq, the goat-skin bag that has almost vanished.

Women are not allowed to enter the place where Hazrat Nizamuddin lies buried. But they are free to enter the area where Hazrat Nizamuddin lived, meditated and died, which is some distance across the road from his dargah. This was his khanqah, a retreat, where he also performed chilla-kashi, the spiritual custom in which a secluded person goes without water, food or sleep for 40 days.

Hazrat Nizamuddin’s chilla feels completely cut off from the rest of the world, although it looks out to Humayun’s Tomb and Gurdwara Damdama Sahib. The railway tracks are nearby—the sound of passing trains only amplifies the deceptive remoteness of the place.

The chilla’s most pristine aspect is its little graveyard. Try to visit in the evening. It is beautiful to sit beside the graves as the sun disappears, the sky turns red, while the comforting sound of trains continues to roar and fade. Do not fail to look for the resident fakir who lives here with his seven cats.

Ladies are allowed inside 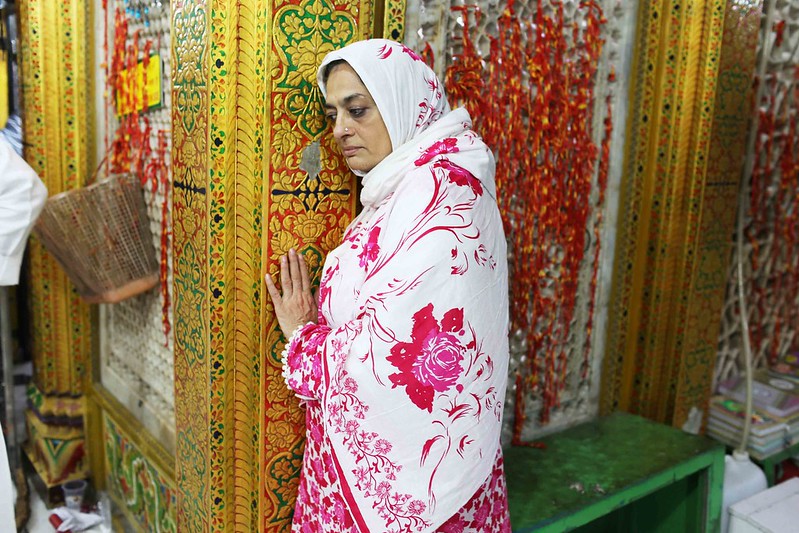 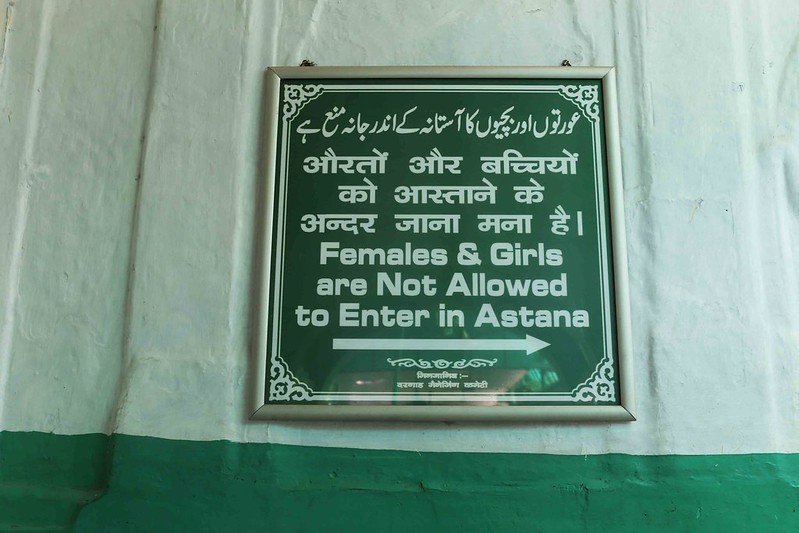 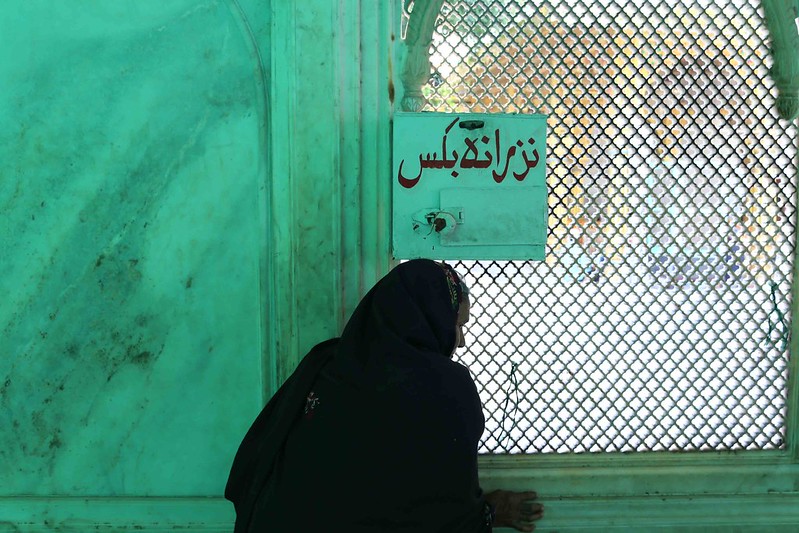 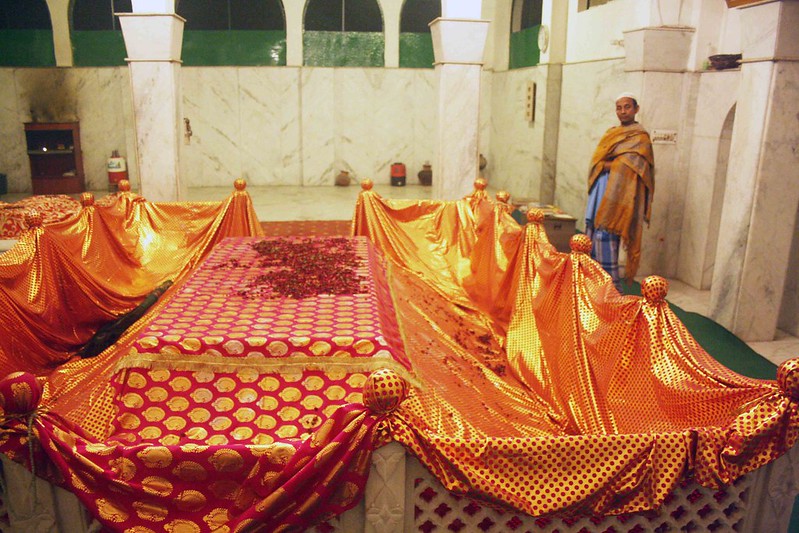 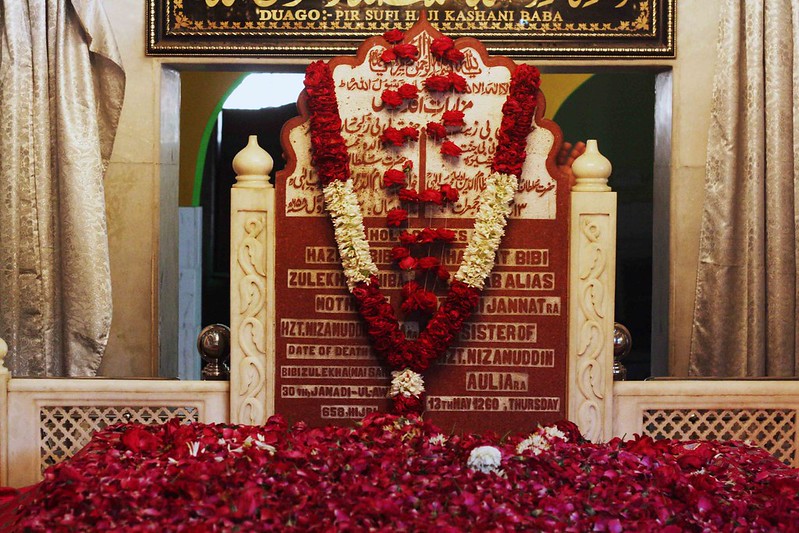 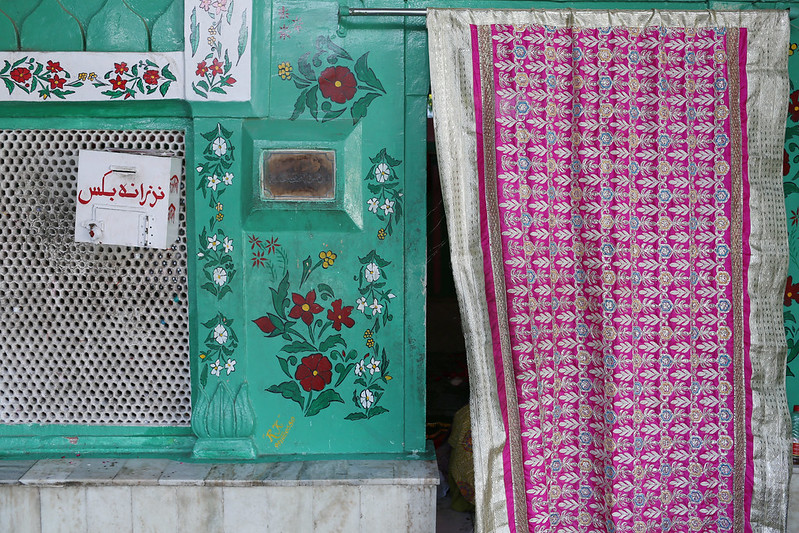 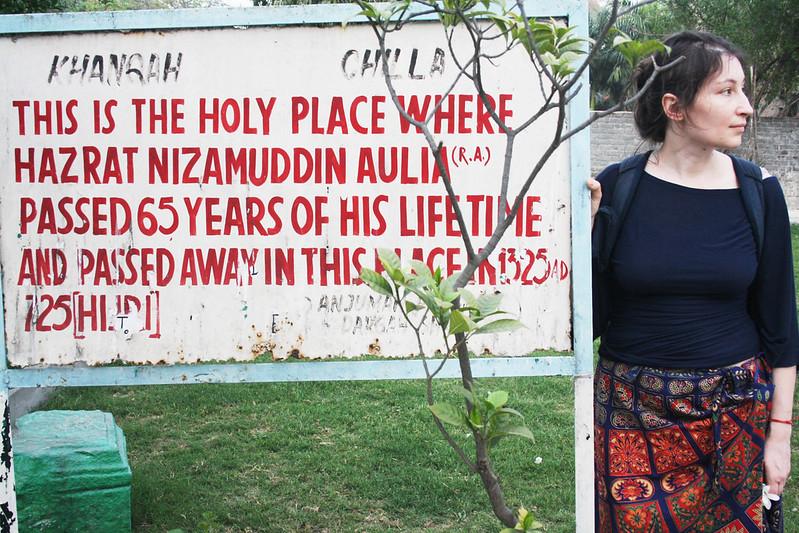 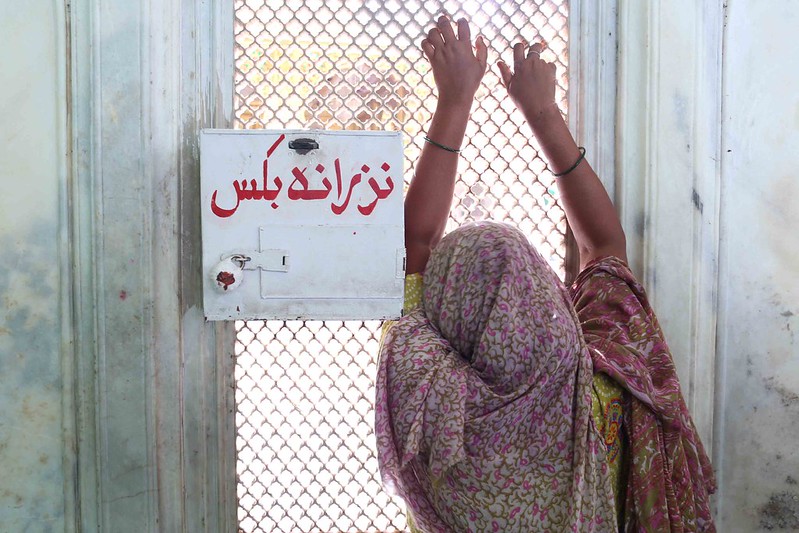