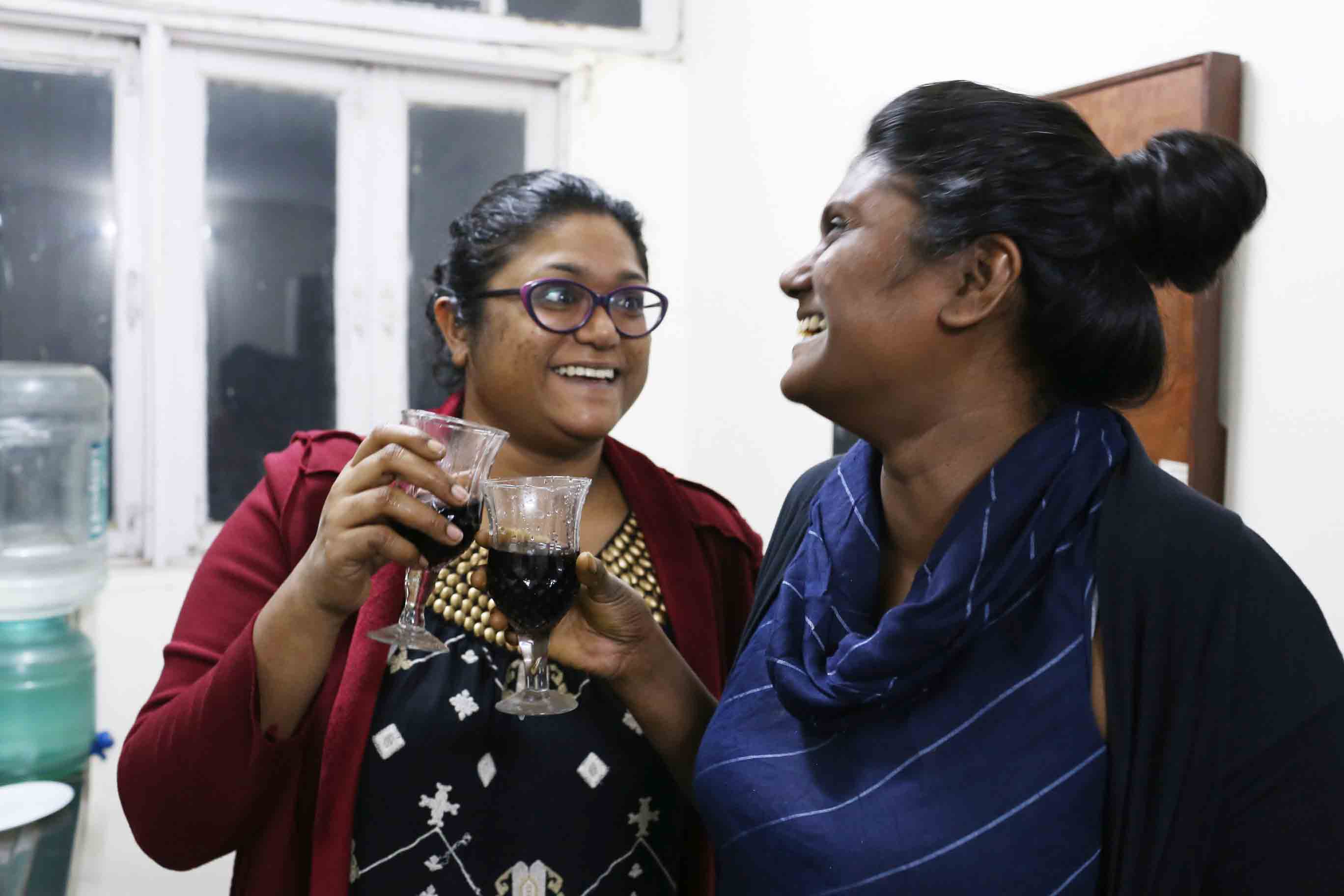 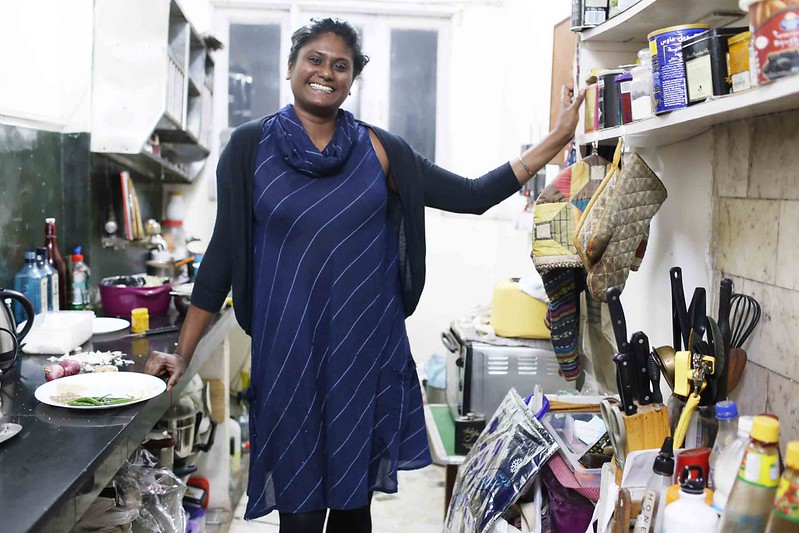 I love to cook with wine—says a placard hanging on her drawing room wall.

One night The Delhi Walla enters the second-floor apartment of Rosalyn D’Mello, the author of A Handbook for My Lover. Ms D’Mello shares her home in Kailash Hills with her sister, Ramona, who works in a publishing house. The two women are from Goa—but they grew up in Kurla, Bombay—a calendar in the kitchen shows a picture of that city’s St Andrew’s Church (see photo 4 below).

And, in case you are wondering, both Ms D’Mello and her sister do mull over wine while playing around with pots and pans. Sometimes they… well, never mind.

Ms D’Mello, who is working on a food book for single people, shares her recipe for Goan Green Curry Chicken. She says:

“You could call this dish my forte. I can cook it with my eyes closed, I never need to consult a recipe, just fumble around in the kitchen until I know I’ve placed all the right ingredients. Until recently, my greatest challenge making this dish in Delhi had been in finding a good coconut grater. The three times I’d bought a unit, they all brokedown. I soon resorted to breaking coconuts on the floor (later I found a koyta at the Kailash Colony weekly market), then using the knife to get the flesh out which I’d then grind in a mixer. It was painful enough. Last year I asked my mother to gift me an Anjali grater for Christmas. It’s been amazingly resilient and I hope to be able to take it with me to my grave.”

Ms D’Mello remembers the first time she made this dish in her house in Kailash Hills. “I’d invited a whole bunch of artist friends over, not realizing I barely had any cutlery. So my friend and I washed plates as soon as someone was done eating so the same six plates got recycled. The Goan Green Curry Chicken was a hit, as was the pork vindaloo”

Last week Ms D’Mello made 3 kilos of this dish, and it got polished off in a single evening.

“Ideally, make it at least two days before you plan to serve it,” says Ms D’Mello. “All Goan food tastes better like that (except fried fish). And attempt to let the chicken marinate for at least six hours, if not overnight. This will make it more receptive to the flavor of the masala.”

For the Marinade
Wash the chicken well. Marinate it with a cup of dahi, a teaspoon of salt, a teaspoon of ginger garlic paste, and a dash of turmeric. Use your hands to rub these ingredients in. Leave aside for ideally up to 6 hours or over night.

Wet ingredients
A generous bouquet of coriander
4-6 green chillies
1 cup grated coconut
1 and a half tsp: Ginger-garlic paste
1 ball of tamarind soaked in half a cup of warm water
1 small coarsely chopped onion

Place all the ingredients in a large platter so the colors pop out at you, and so you can check that they’re all present. The most important of them all is fresh corriander, plucked and cleaned and ready to be pulverised in a mixer. This sacrifice will ensure the green hue that is the highlight of this dish. The grated coconut, when it is mixed in will diffuse the depth of green, clouding it while ensuring a richness of flavor.

But before grinding the coriander and coconut, grind all the dry ingredients so they are rendered finer. Then add the wet ingredients: coriander, coconut, onion, tamarind paste and ginger-garlic paste and green chillies.

Allow enough grinding time so that all the ingredients cohere into a thick paste. The tamarind soaked in luke-warm water should suffice to complete the mixture without the need for extra water.

Run your fingers through the paste to ensure there isn’t too much coarseness, that the texture of the masala is consistent.

This process should take you about 5 minutes.

Heat a casserole, don’t line its surface with oil. Just move the masala from your blender to the vessel and let it fry well on a low flame until the kitchen is infused with a coriander-cinnamon scent. The coconut will punctuate itself later.

When the bright green transforms to a slightly darker version, add the marinated chicken. Toss the pieces around so that the masala mixes evenly. Let it cook on a low flame so that the chicken sweats. When you hear the beginning of a bubbling soundtrack, add water, not too much, just enough to let the pieces swim.

Leave it to simmer.

Meanwhile, chop some potatoes, in the final ten minutes drop the potatoes into the cooking chicken so they imbibe the flavor of the masala. 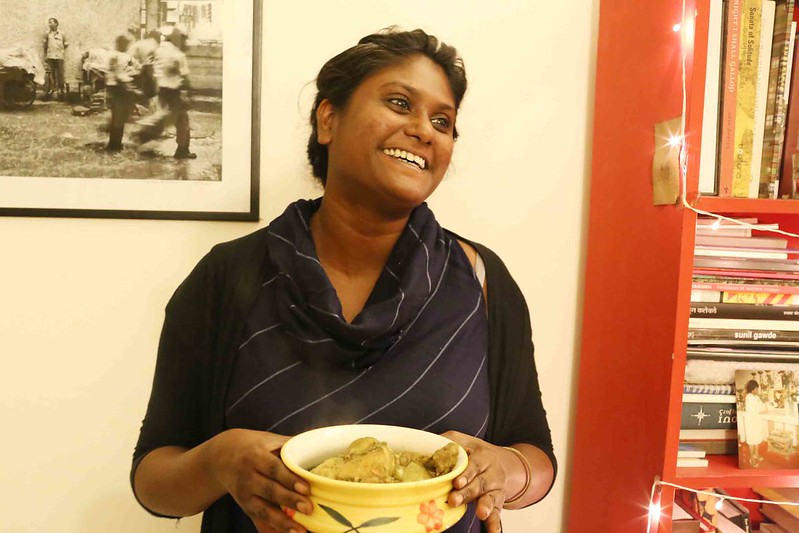 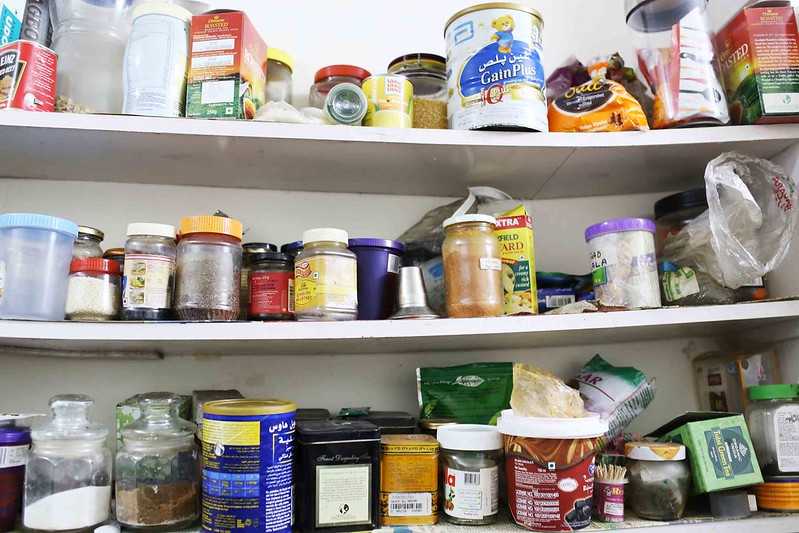 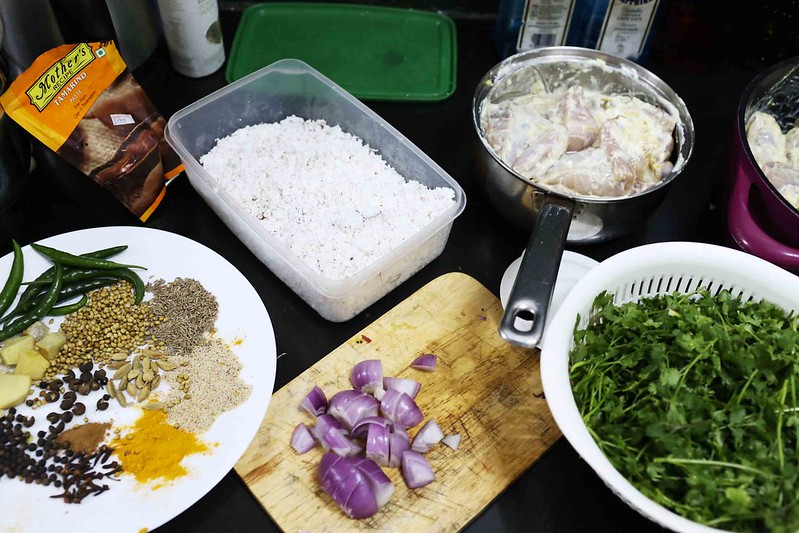 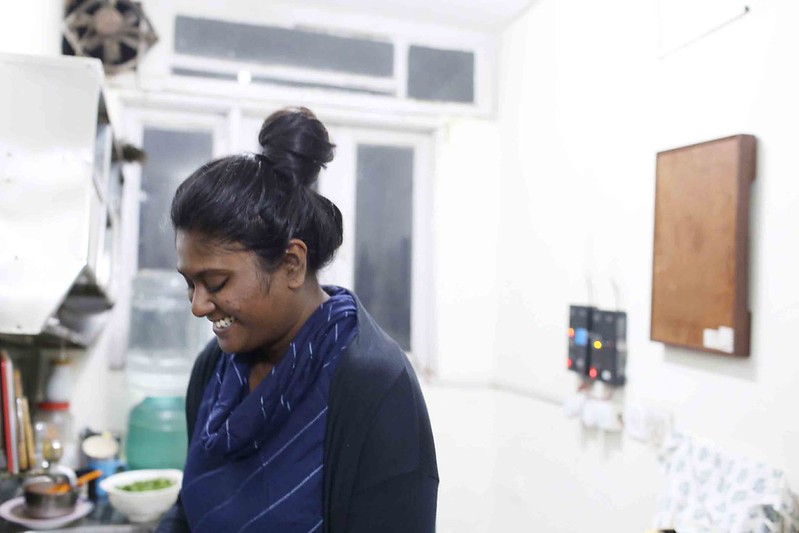 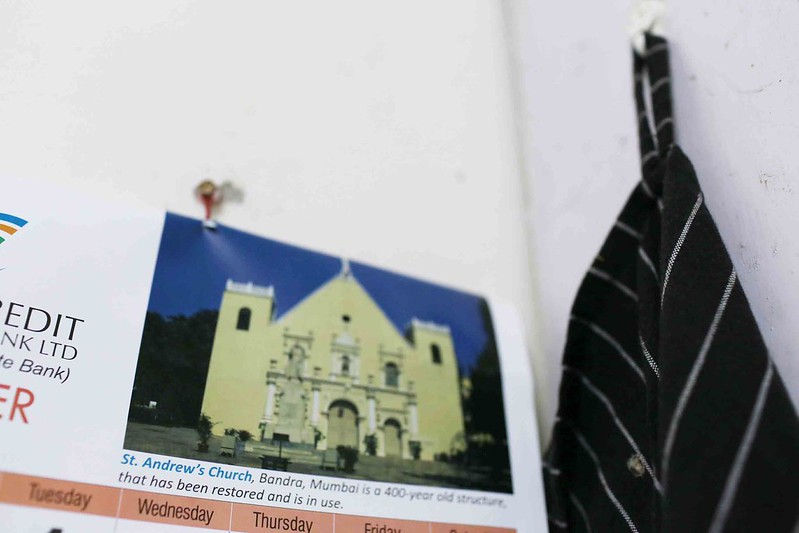 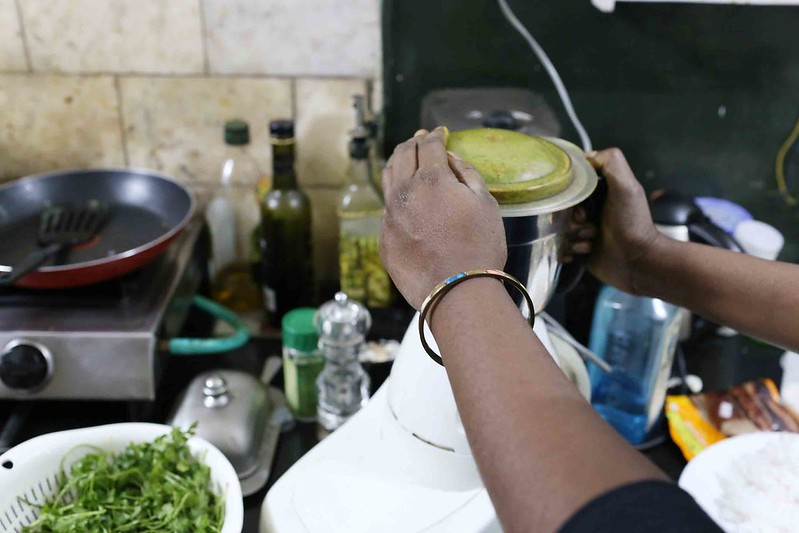 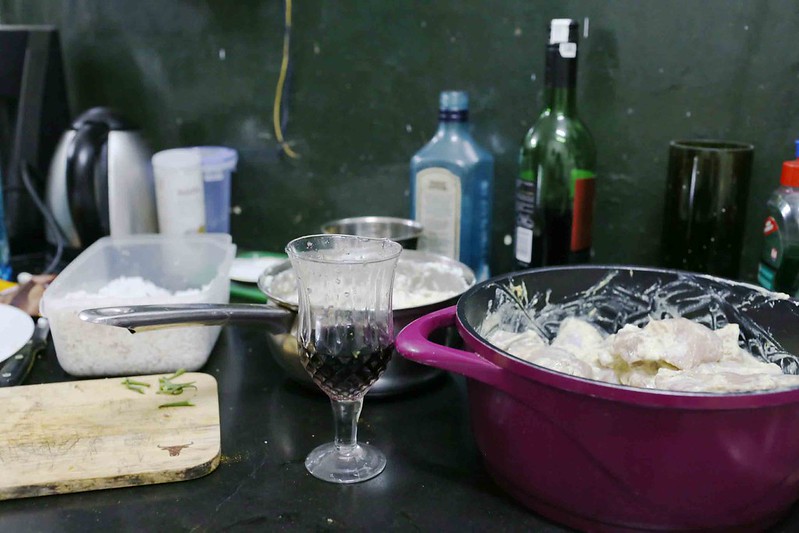 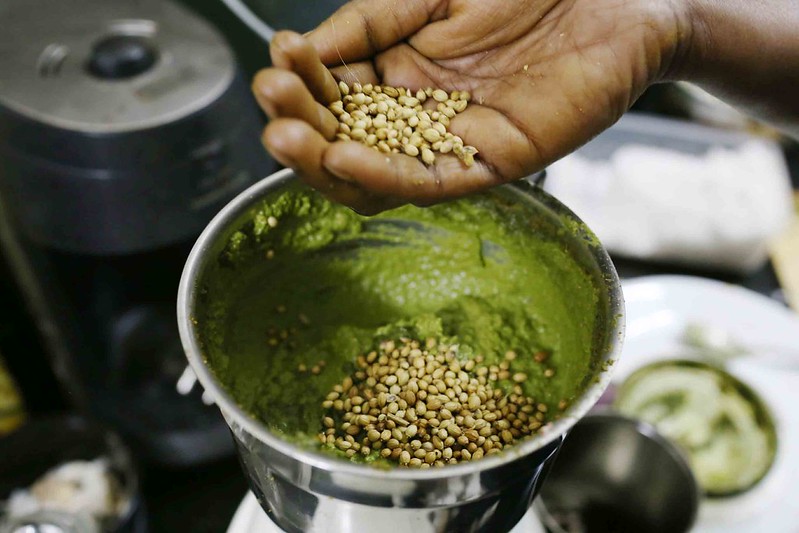 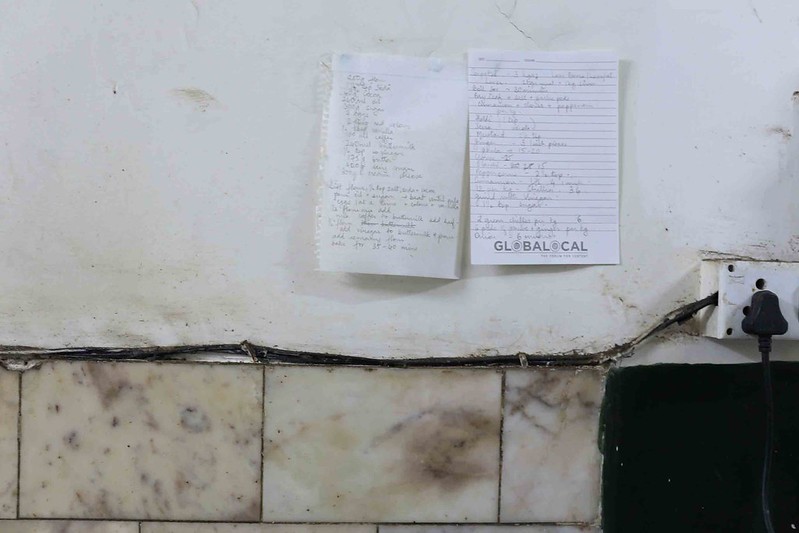 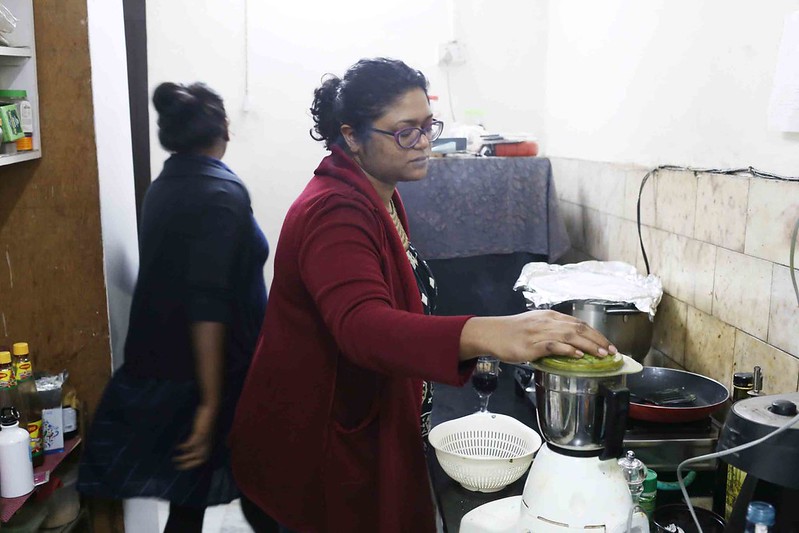 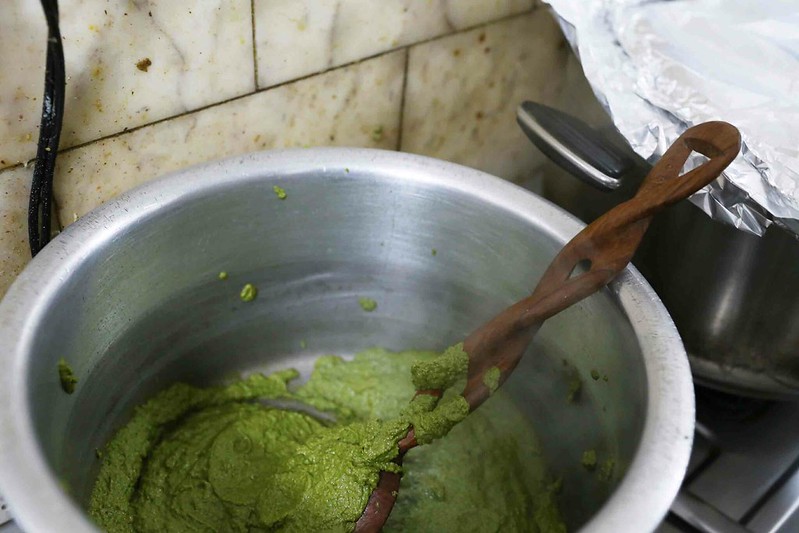 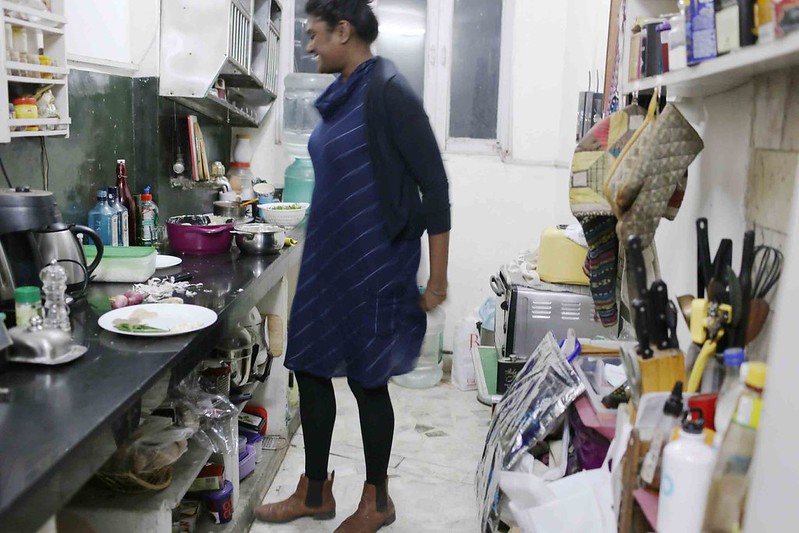 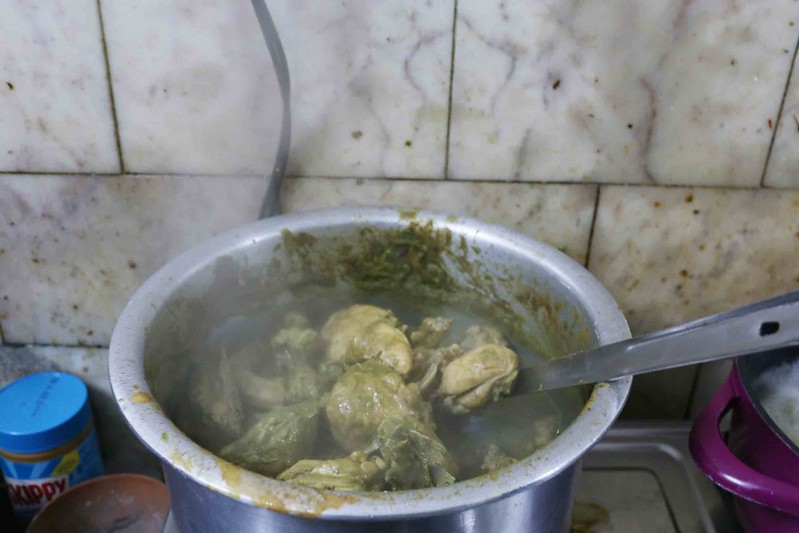 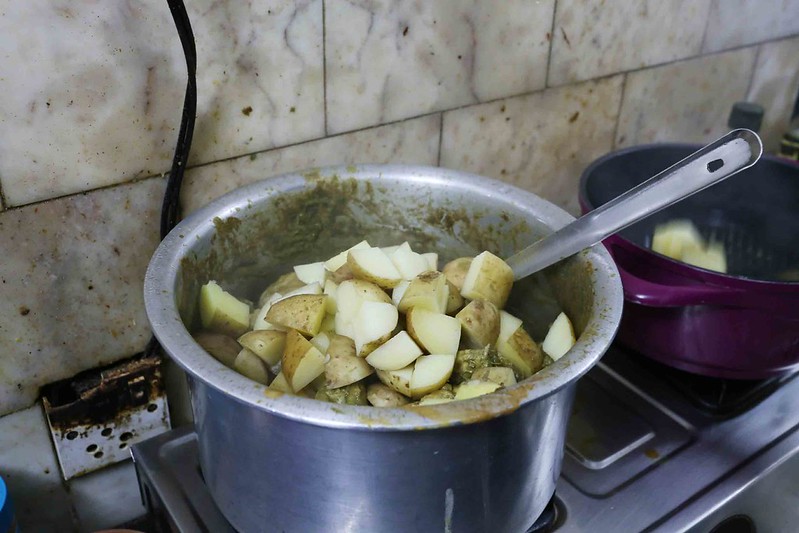 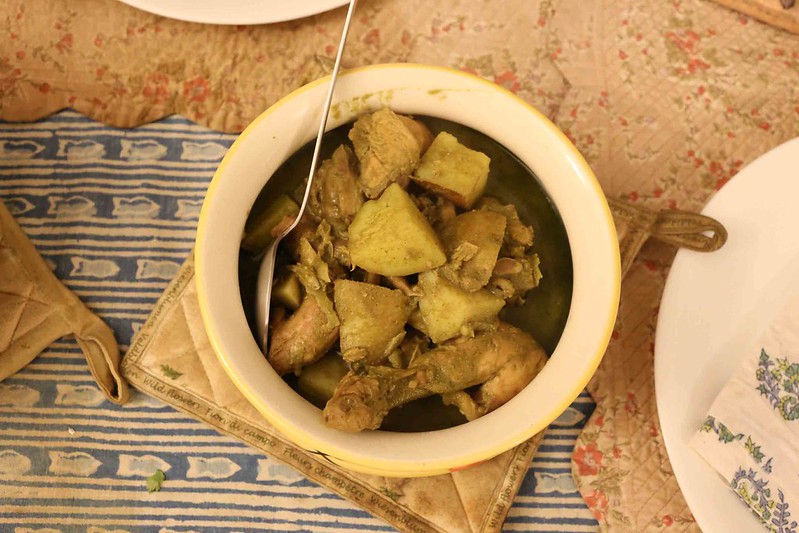 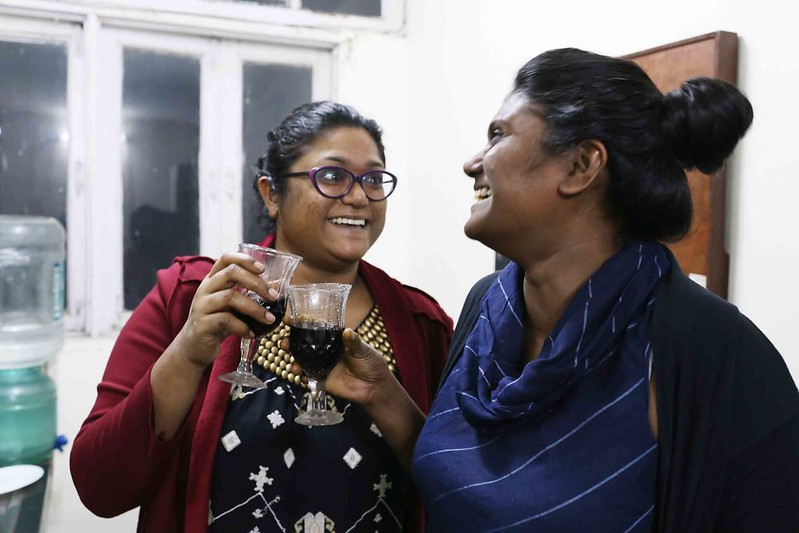 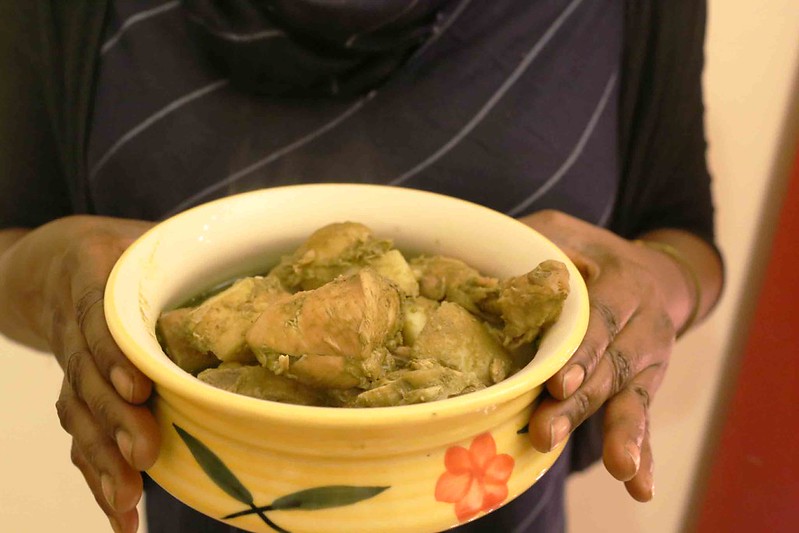 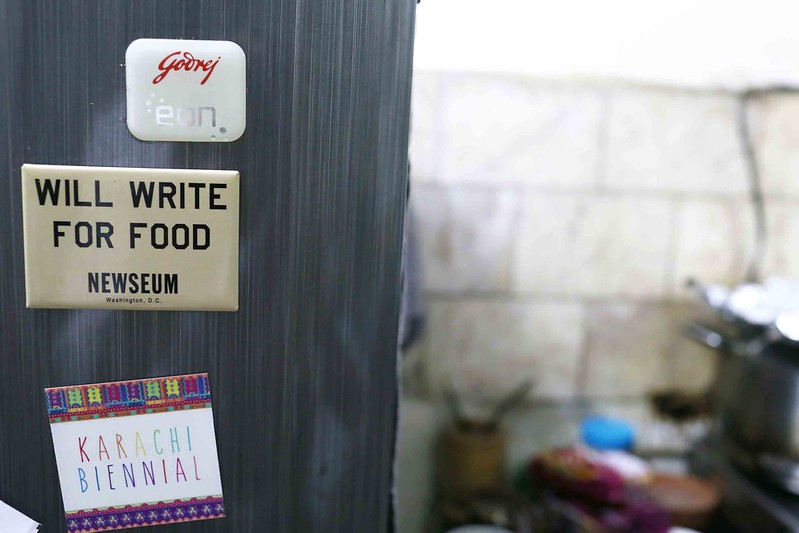 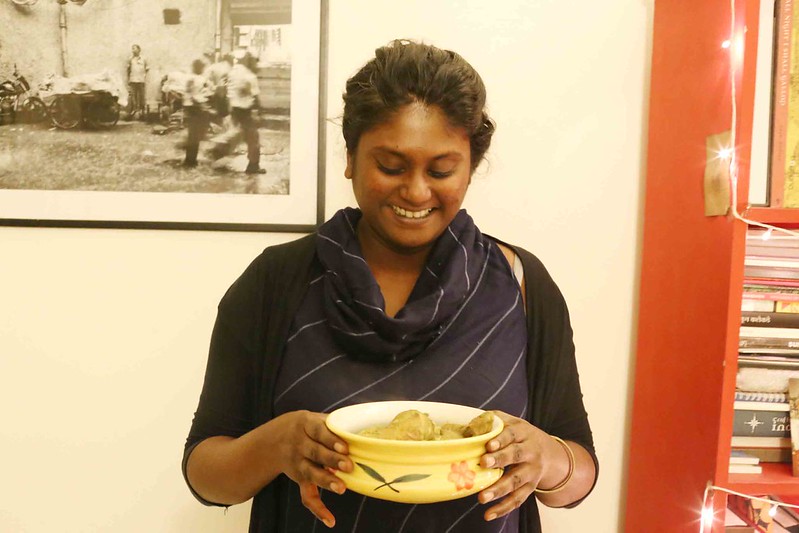