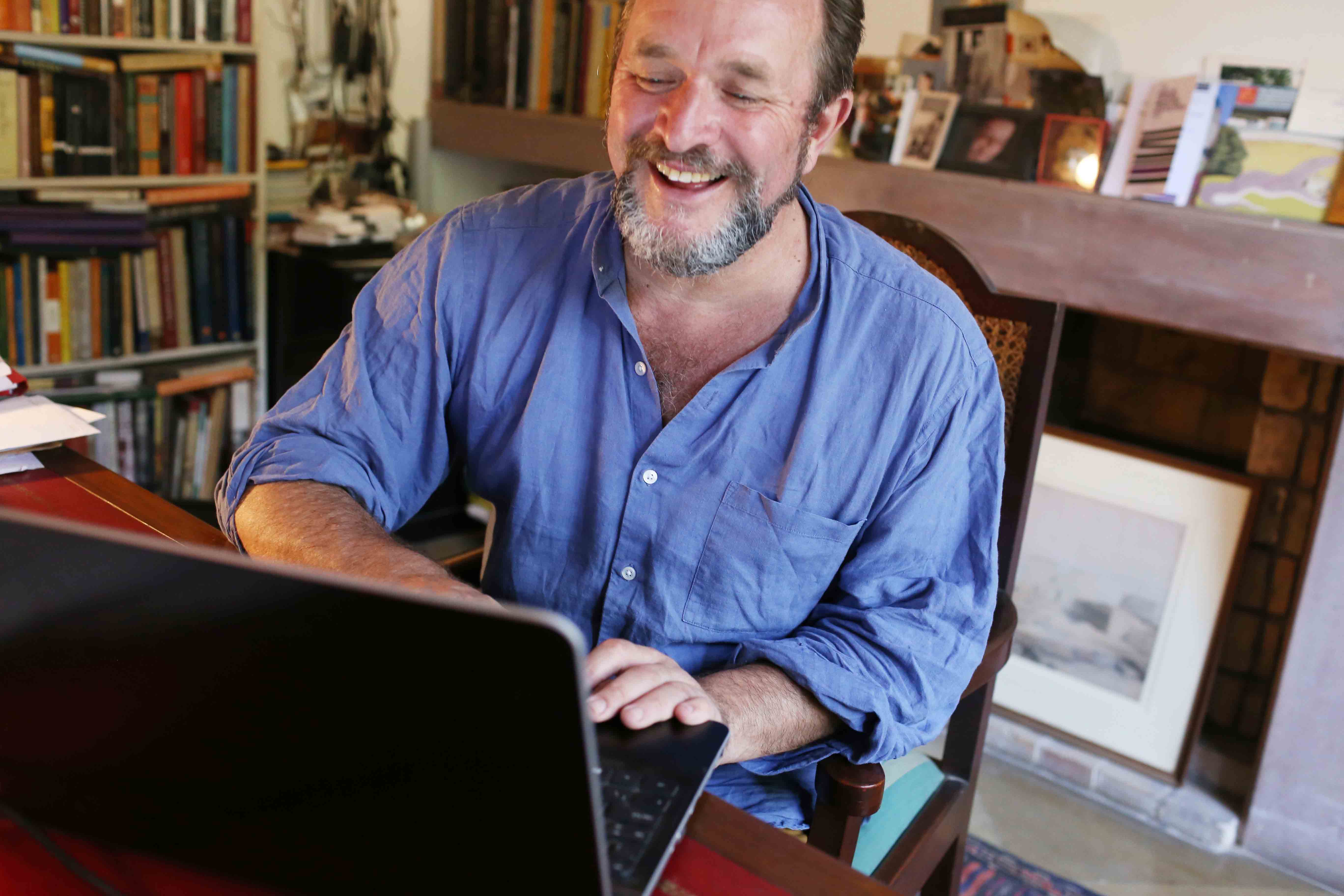 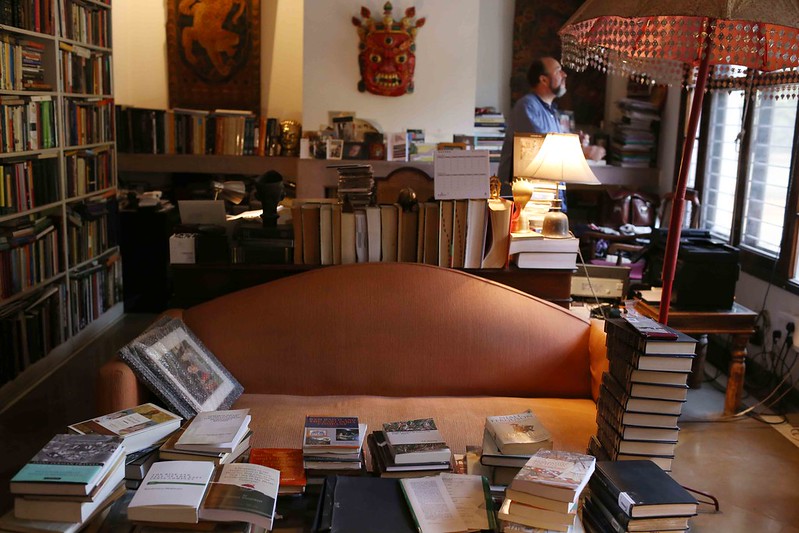 His empire at Mira Singh Farm, on the outskirts of Delhi, teems with Polish chickens and Scottish bantams. He also rules over a large population of goats, including Petunia, who was given to him by Pradip Krishen, the author of Trees of Delhi.

One afternoon, The Delhi Walla enters the library of Scotland-born William Dalrymple, author of exalted books such as City of Djinns: A Year in Delhi, Return of a King: The Battle for Afghanistan and White Mughals: Love and Betrayal in Eighteenth-Century India. And let me make a confession: as a Delhiwalla, I came here with no other ambition than to personally touch the first edition of City of Djinns, the book that introduced me to Delhi when I first started living in this hard city. Alas, my wish remains unfulfilled, as Will (Mr Dalrymple talked to me on the condition of being referred to as Will!) explains to me that Djinns is with the rest of his collection–chiefly books on Scotland and Middle-East–at his second home in Chiswick, London.

I console myself thinking of all the possibilities such a house can offer in terms of book flicking. Here, after all, even the swimming pool shed has its share of bookshelves, and the toilet is so highbrow that it has The New York Review of Books lying by the bathtub (see photo 21 below). This is promising. But let’s not dwell on pernicious book thieves and what they might consider slipping into their bag (maybe Yadav: A Roadside Love Story or Delhi 1857: Its Siege, Assault and Capture) and what volumes they will definitely disqualify (who would really read Does the Elephant Dance: Contemporary Indian Foreign Policy? Come on, Willie.)

But let’s go back to our host.

When it comes to reading, Will’s beloved bookstores are–like his book collection–spread across the world: Arthur Probsthain and Daunt Books in London, Heffer’s Bookshop in Cambridge, Blackwell in Oxford, and Bahrisons Booksellers in Delhi.

When it comes to writers, Will is especially fond of Bruce Chatwin. A dear friend of Will, Mr Chatwin died at the young age of 48. With great care and love, Will takes out a handsome edition of Mr Chatwin’s In Patagonia from a shelf. The hardbound is inserted inside an orange slipcase. This is a folio edition of the classic travel book and was reissued last year in London. The introduction is by Will. He silently looks on at the book for a long time before returning it to its place.

Will first met Bruce Chatwin when he was just 21. They sat down for a lunch in a London club hosted by a common friend. Mr Chatwin was already dying of AIDS. In his introduction to In Patagonia, Will described what that first meeting meant to him as an impressionable young writer: “… as well as being dazzling, Bruce was also kind. He listened as well as talked, and took far more interest in my tales of student travels than he needed to. More importantly, he gave good advice: offering help with agents and publishers and contracts, and making me promise not to rush the book I wanted to write about my journey: all books needed time to develop, he said, and first books in particular. He said never to accept an advance if you could help it, as that would strap you to a company’s schedule rather than the rhythm of the book itself, and he made me promise never ever to give anything in until it was completely ready.”

When it comes to writing, Will does all of his in the swimming pool shed because the wifi doesn’t reach to this part of the farm, he explains. These days he is working on a book about the rise of the East India Company. No wonder then that the desk is covered with books as exciting as… but let me think….

How come this Scottish man, who set foot in India for the first time on 26 January 1984 only, has become a globally acclaimed historian of Indian things? Why do his writings–and not some India-born scholar’s–on Ajanta caves, Rajput paintings and Deccan Sultans appear on the venerable pages of The New York Review of Books? How did it fall on him to write The Last Mughal: The Fall of a Dynasty, Delhi 1857? This book was the result of “previously undiscovered sources” that he, and not acclaimed Indian historians, excavated from the National Archives of India in the heart of Delhi.

What were our native historians up to?

“I have made a career in India thanks to the fact that, for a long time, very few historians here were writing nonfiction with the prospect of being read by general readers,” says Will. “Until recently, very little narrative nonfiction by Indian writers was being successfully published around the world as Indian fiction was. That absence, for such a long time, gave writers like Patrick (French) and I room to breathe.”

Indeed, Will is bold enough to declare that if a British author were to land in Delhi in 2026, he would find very few subjects not being written about by Indian nonfiction writers.

On returning to his library, Will settles down behind a desk. A side-table is cluttered with books waiting to be blurbed or reviewed by him.

After a while, artist Olivia Fraser briefly steps inside the study to softly exchange a word with her husband (see photo 11). Apparently, the couple has separate plans for the evening but plans to meet for dinner.

Minutes later, a restless Will emerges out into his garden to be immediately circled by his Polish chickens and his Scottish bantams, and by Aishwarya and Fudge, his two dogs. Mr Dalrymple’s library is all mine.

Will in his world 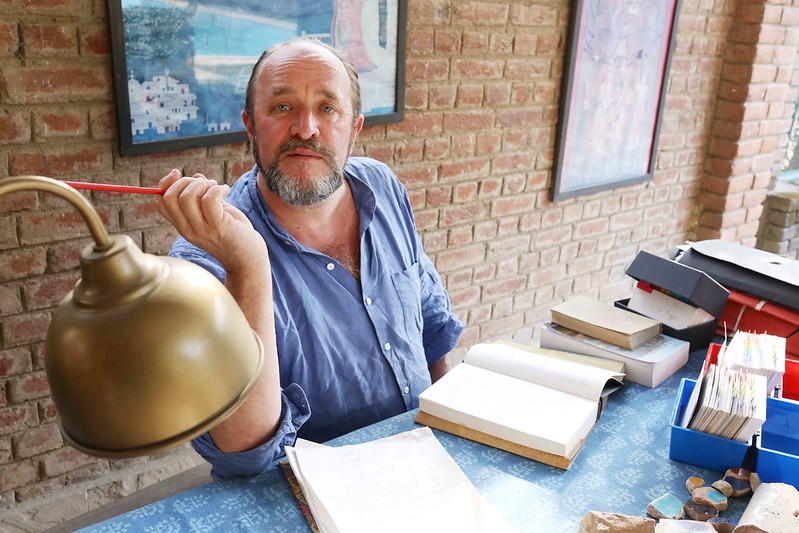 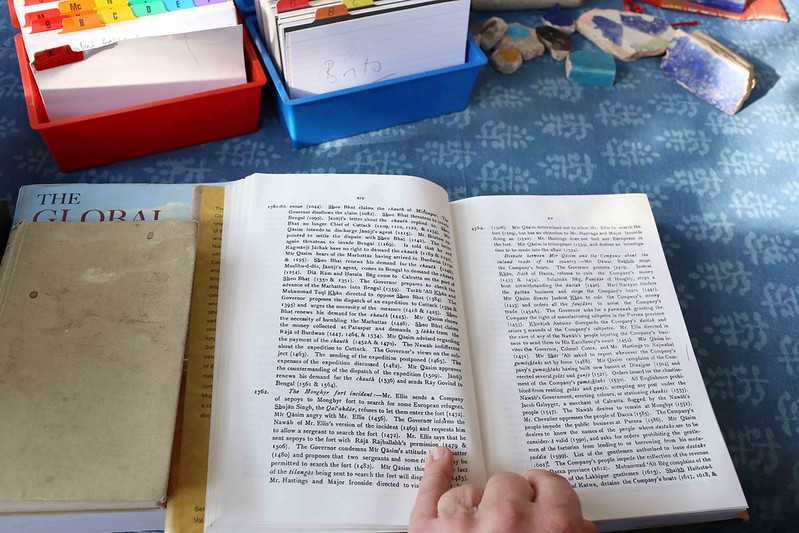 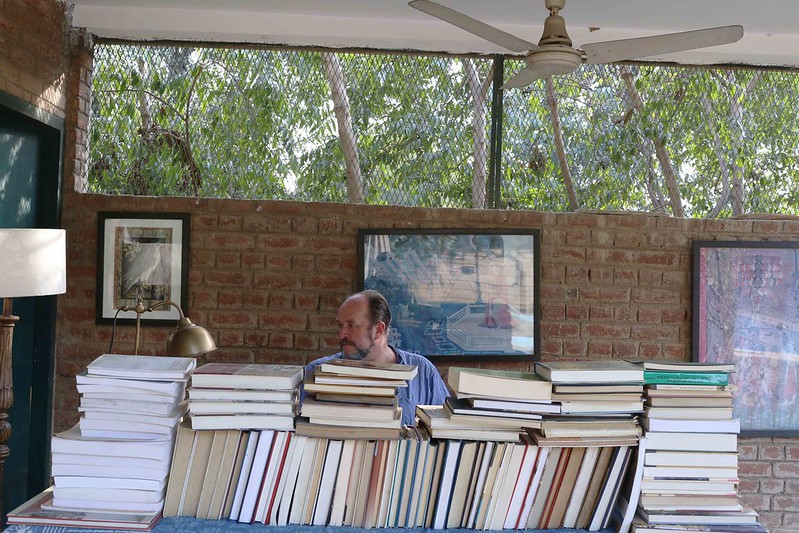 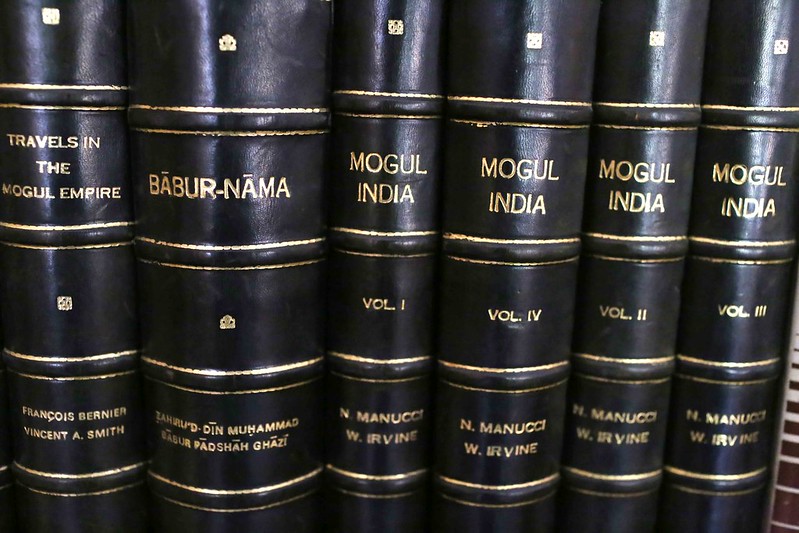 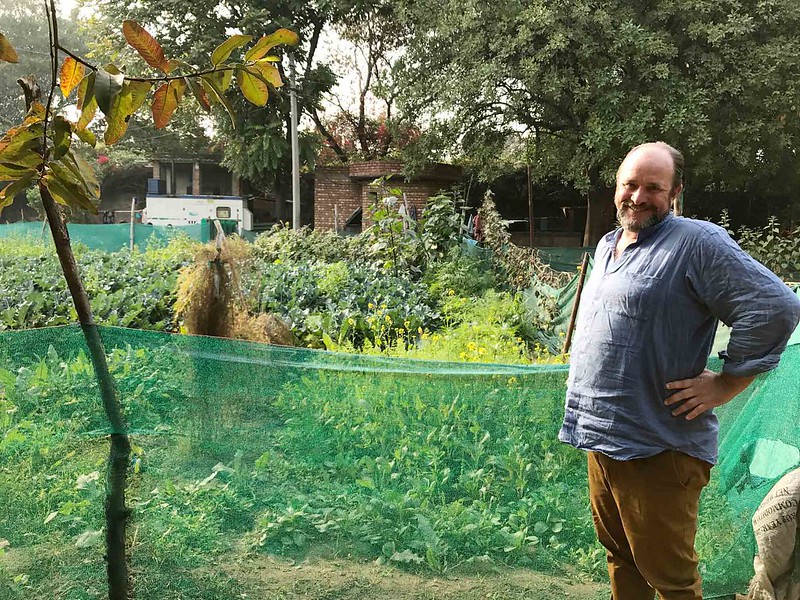 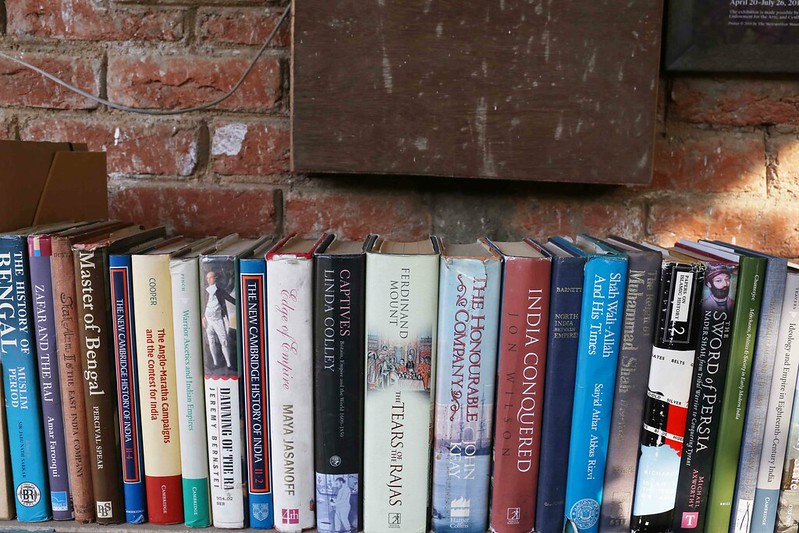 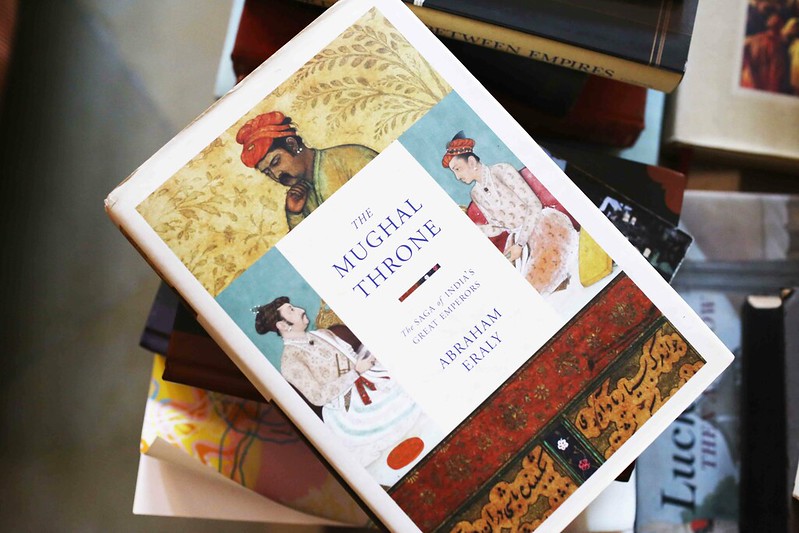 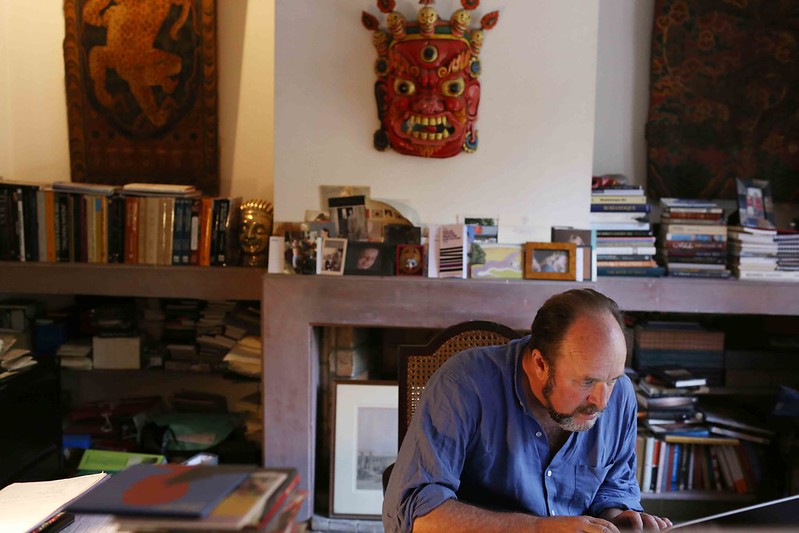 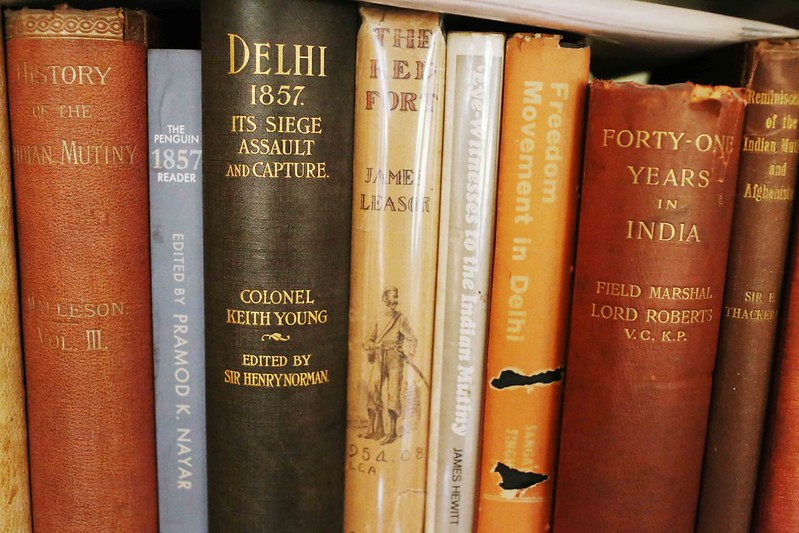 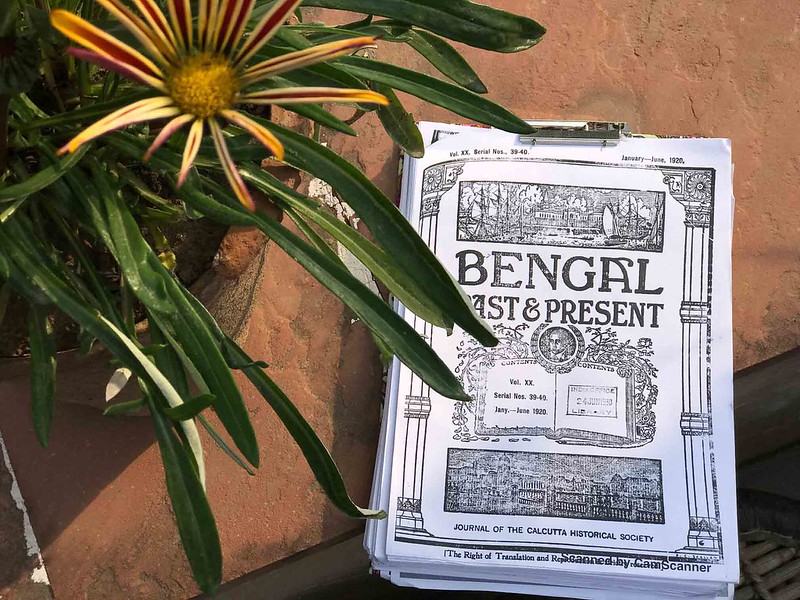 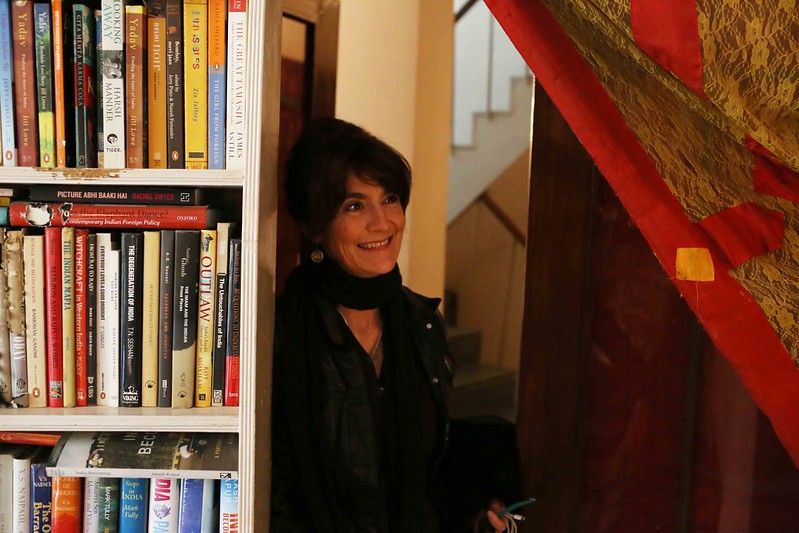 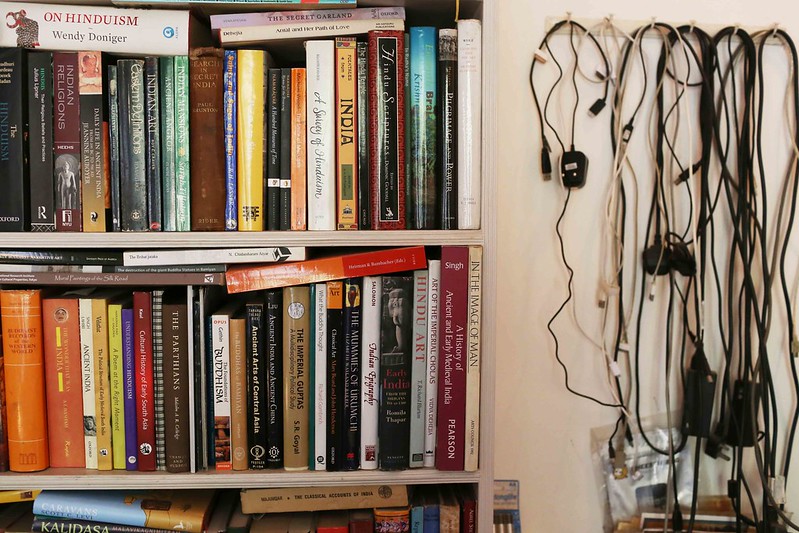 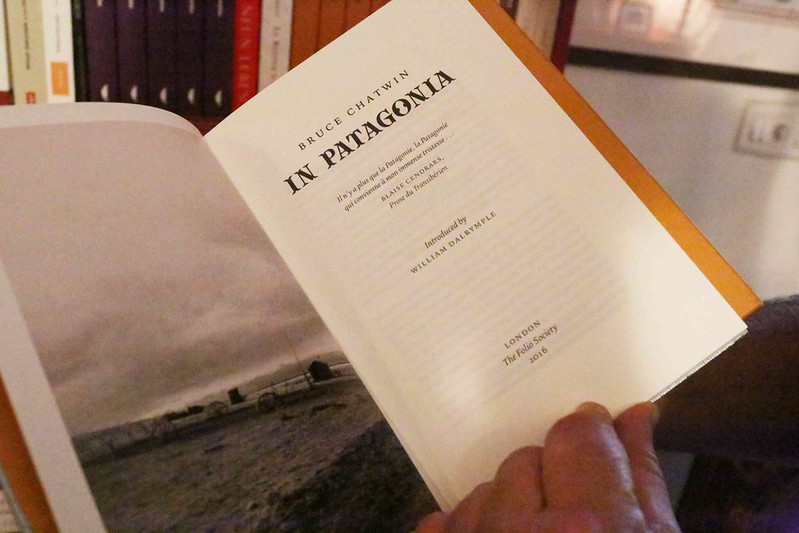 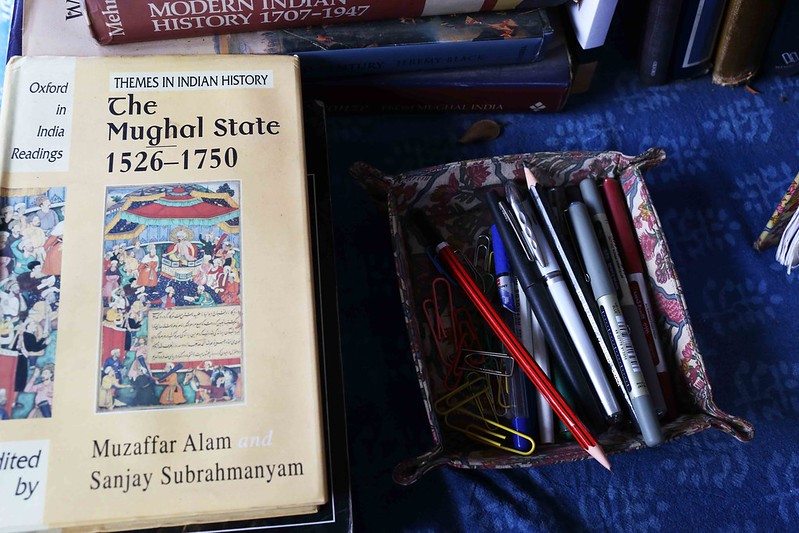 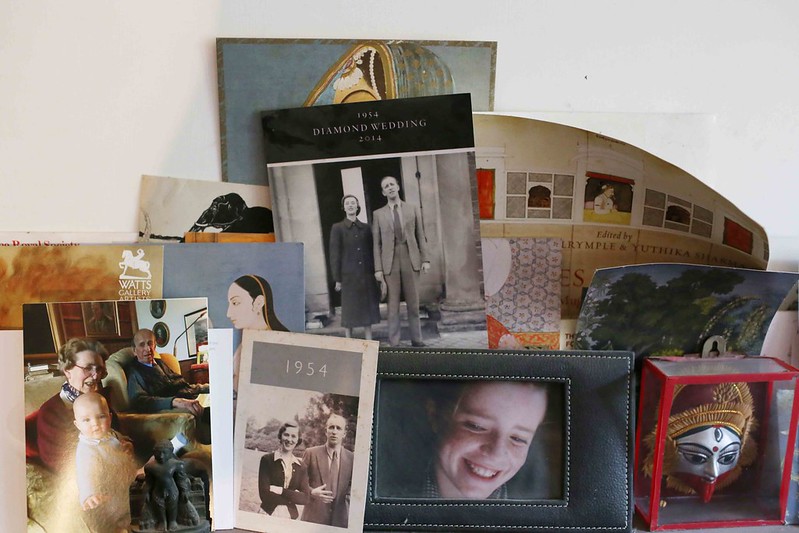 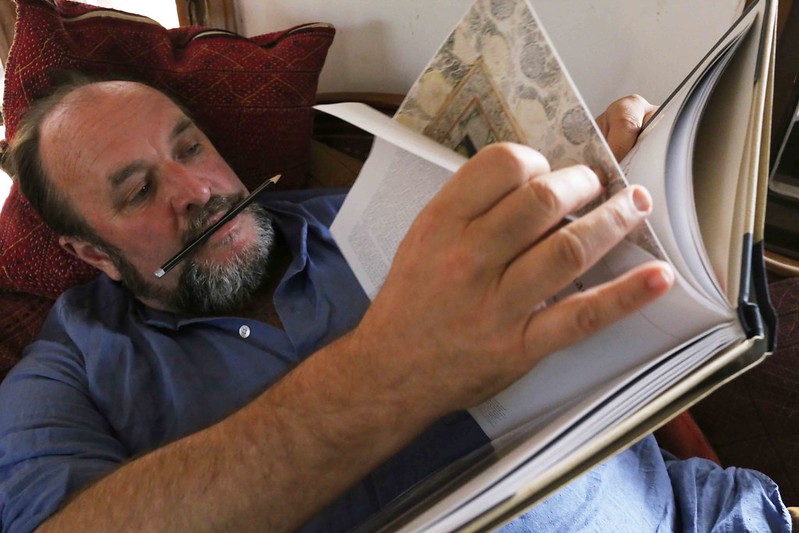 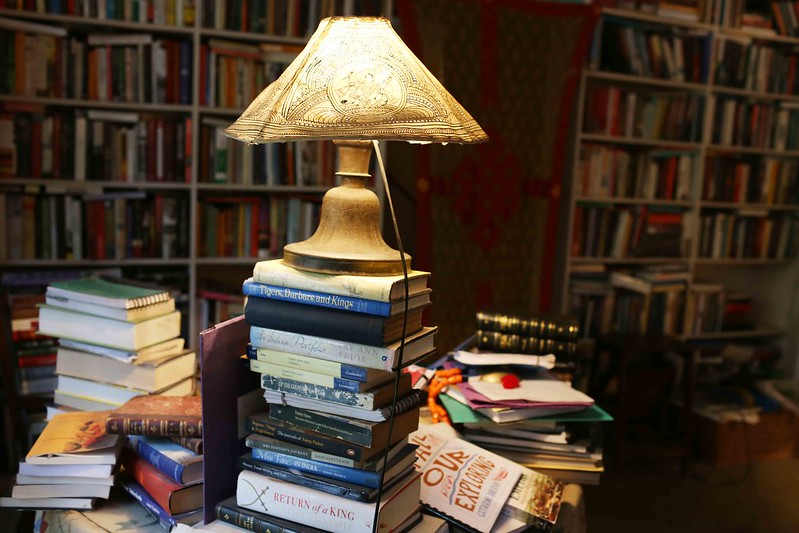 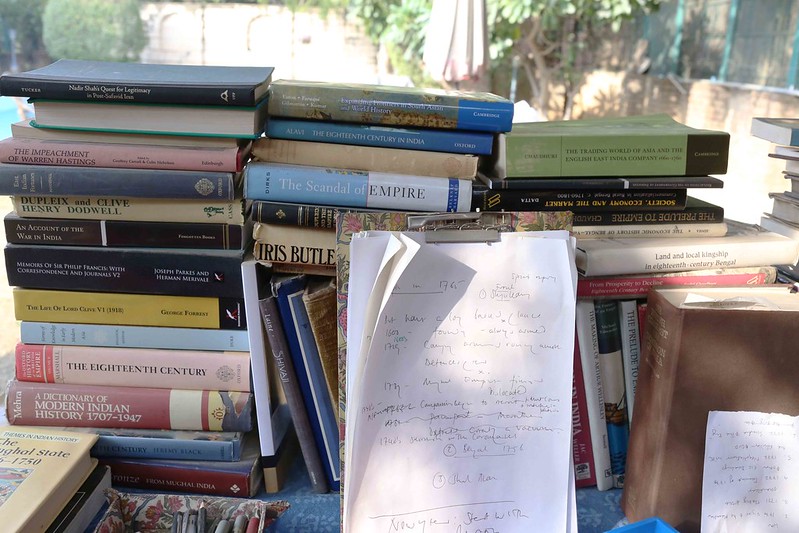 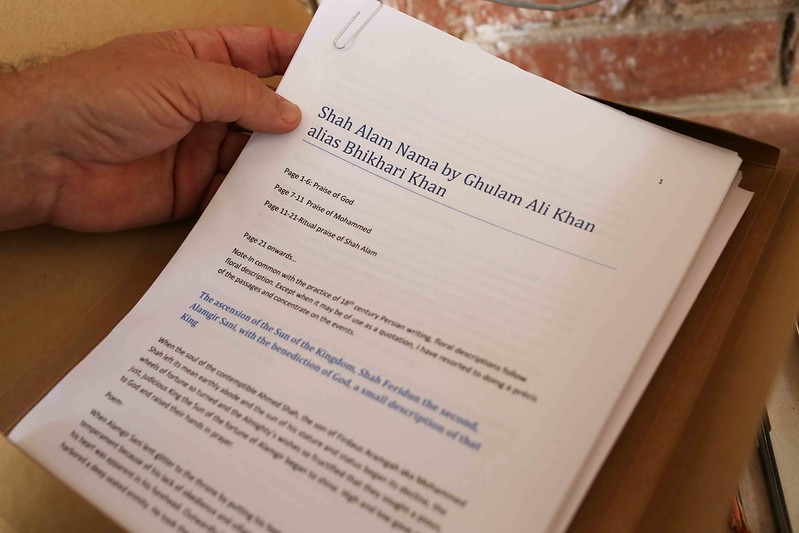 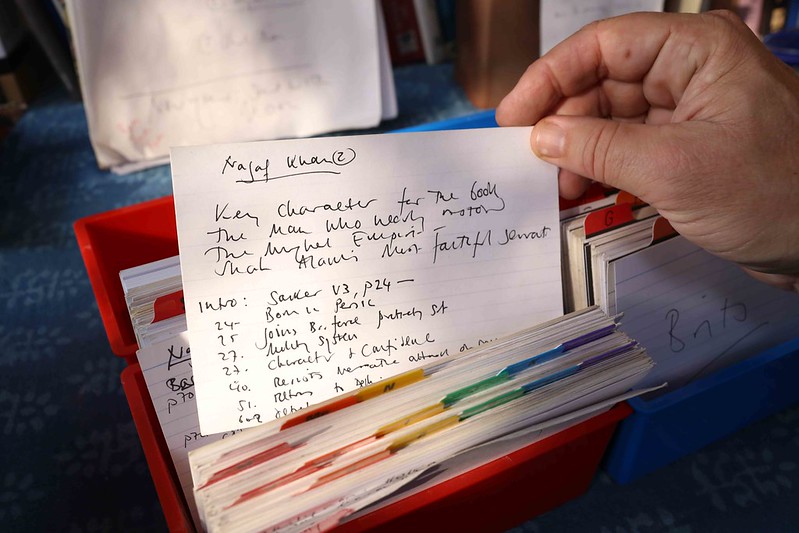 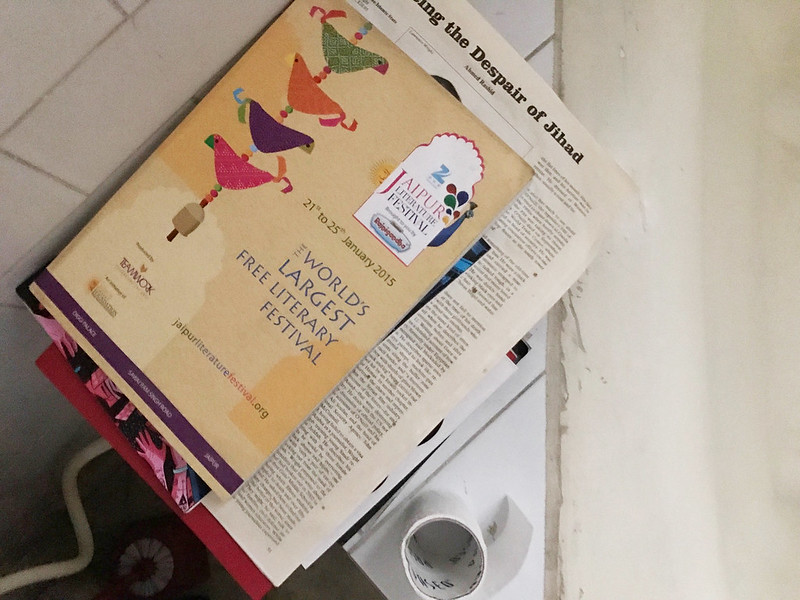 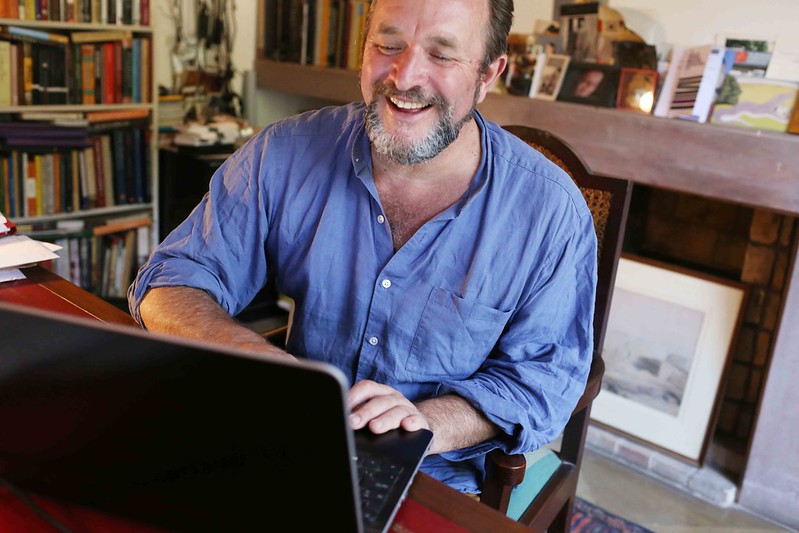