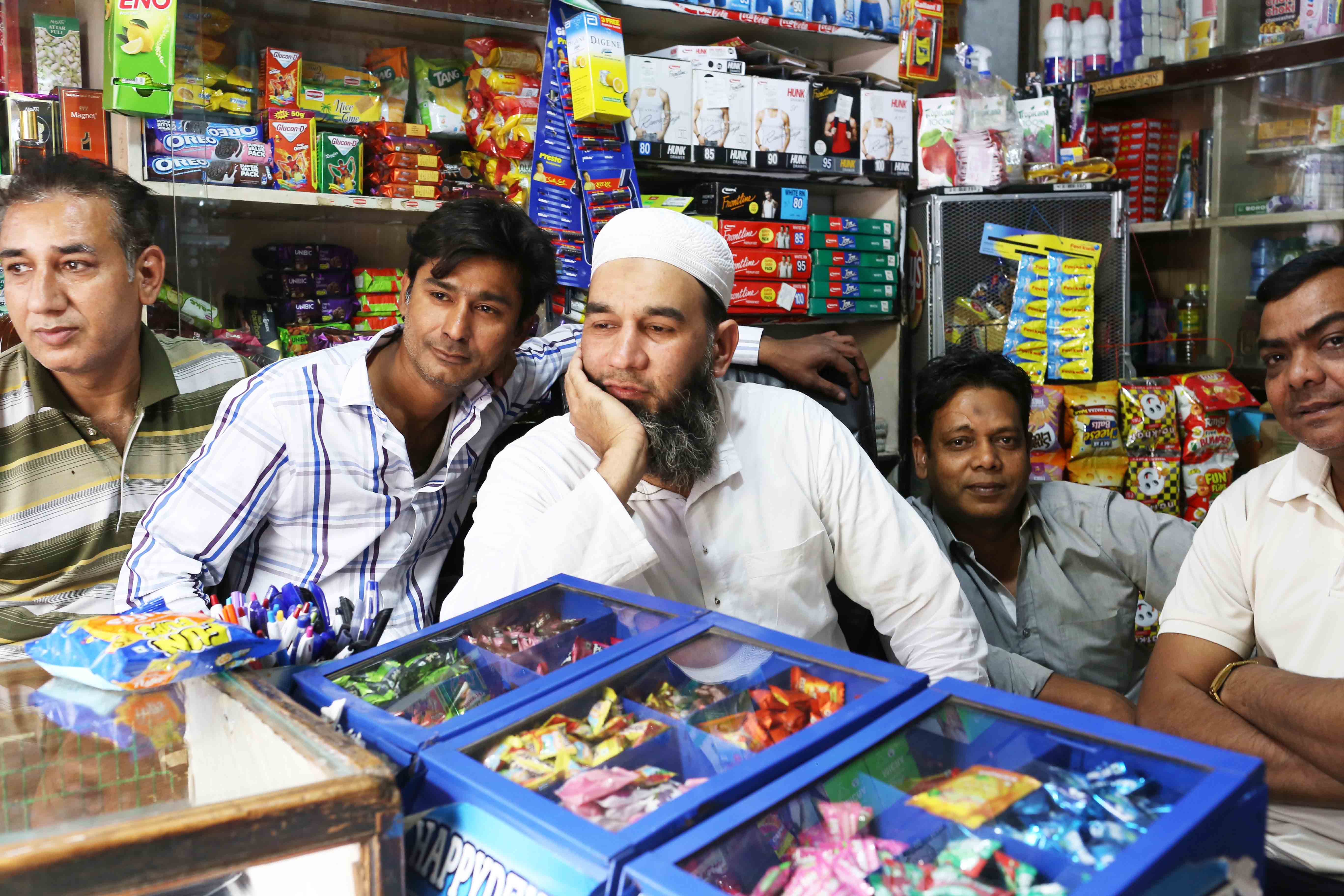 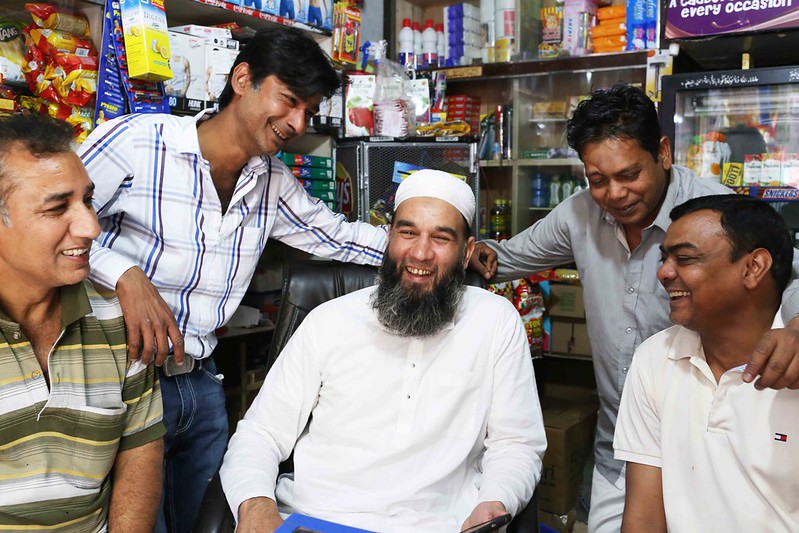 To outsiders, Nizamuddin Basti in central Delhi is most famous for the Sufi shrine of Hazrat Nizamuddin Auliya. The more knowing among us may also point to the tomb of great poet Mirza Ghalib.

The Delhi Walla, however, can list other equally endearing, if not as well-known, aspects of this historic enclave, such as Javed Khan’s cheap-old Swiss watches shop, the ittar (perfume) shops opposite Karim’s restaurant, and — last but not least — the friends circle of Arab Sarai General Store.

Every Sunday afternoon, five friends assemble without fail at this all-purpose neighbourhood shop on the atmospheric Ghalib Street. They all are middle-aged married men living in the Basti since they were born.

Their friendship, more than 30 years old, has survived careers, wives, politics, children, and even mobile phones. In fact, their bond is so strong that they can recite the ten digits of each other’s cell phone numbers by heart.

As part of the Sunday ritual, these five men sit at Arab Sarai General Store for two hours — from 1 pm until the afternoon prayers — when they get up to offer namaz at the adjacent Markazi Mosque.

The friendship has acquired a reputation in the locality. “They are friends for as long as I can remember,” says pavement barber Tasleem Abbasi. “Everybody wonders how their dosti (friendship) has survived for so long,” says Muhammed Naeem, who runs a parantha stall. We try making our own investigations.

Each of these men has two children, except for Akhtar Ali, the cook-cum-caterer, who has three.

All of them have belly bulges but not Muhammed Hussain, who runs a travel agency.

Lean and dapper, he is the only one among his friends to wear blue denim jeans. (The photo album on his mobile phone is filled with selfies of him and his wife in Delhi’s many shopping malls.)

The only one in the group “lucky enough” to have a permanent government job is Fareed Ahmad, who works in the Ministry of Commerce.

Mohammed Masood, an accountant in a private firm, is called ‘joru ka ghulam’ for he “never stirs out without the permission of his wife”.

The quietest person is Mehboob Ali, a social worker.

Each of these men keeps a clean-shaven face save for Syed Mohammed Abid, who runs the general store — the site of the Sunday meeting. Mr Abid is the master of a long springy black beard. The clean-shaven friends often playfully run their hands along his beard.

One Sunday afternoon I find all of them sitting in the shop. The only missing man is Mr Masood, the obedient husband. “He did come to say he would not be able to come,” says Mehboob Ali, adding, “His wife is the only one among our wives who works in an office and so she usually wants him to be with her at home on Sundays .”

The meeting has already reached a mid-point. Mr Abid is enthroned on his customary chair. The denim-wearing Mr Hussain is smoking a Howrah beedi on a side bench; his other arm is busy on his mobile phone.

Mr Akhtar, the cook, is stationed in front of the ittar bottles. Mr Mehboob is perched on a crate of soft drinks. Mr Masood is lounged on a cardboard carton filled with five-rupee packets of namkeen.

The Sunday meets might appear to have the rootedness of the old Neem tree that stands in the small graveyard at the end of the street, but the fact is that this tradition began just three years ago.

“Usually one of us drops by the shop every day at some time or the other but we would never be together at one time,” says Mr Abid. “So we made a decision that while our daily random gufta-gu (interactions) would continue, all of us shall have to meet every Sunday from 1pm to 3pm come what may.”

“Anything! We have no agenda,” says the quiet Mr Mehboob. “It could be about food, politics, poetry… we also throw cuss words at each other.”

They all break into giggles.

“Did you people have girlfriends when you were single?” I ask. “Would you discuss them with each other?”

The men look cagey. After a brief pause, Mr Fareed says, “Let’s put it like this… some of us had girlfriends but we won’t tell which one of us.”

Mr Abid’s home is just behind the shop and if his family (wife and two sons) happens to be away, the friends move into his home and make a quick feast of home-made Maggi noodles and soft drinks — just like teenagers would do when their parents are away.

On special occasions, the friends organize ‘parties’ on Mr Abid’s roof. Mr Akhtar, the cook, is responsible for the food. The menu is always the same — seekh kebabs and chicken tikka.

For a long time, the friends hosted an annual bash on the eve of Independence Day. Acquaintances were invited and Sufi singer Chand Nizami would be summoned to perform the qawwali. Back then, Mr Nizami was just one of the many qawwals living in the Basti and was still years away from his famous film appearances.

Just then, Mr Nizami himself appears — this time as a customer at Mr Abid’s shop looking for socks made specifically for diabetic patients (it turns out Mr Abid does stock those socks).

It is rare for these friends to go for excursions outside the city, and when they do, it is always to have ghobi parathas at Sukhdev ka Dhaba. This highway eatery near Sonepat in Haryana is two-hour-long drive from Delhi.

Last Tuesday, Mr Abid caused a scandal. Without telling his friends, he drove with “some other friends of his from outside the Basti” to Sukhdev ka Dhaba. His betrayal would have remained a secret if he had not been rash enough to share a picture of the dhaba on his Facebook wall.

“I was shocked to see his post,” says Mr Hussain, suddenly looking up from his mobile phone.

In September last year, the friends drove to Agra to attend Mr Hussain’s brother-in-law’s wedding. They also sneaked out to see the Taj Mahal and had a photograph taken there. That portrait is now the profile picture of Friends Forever, their WhatsApp group. 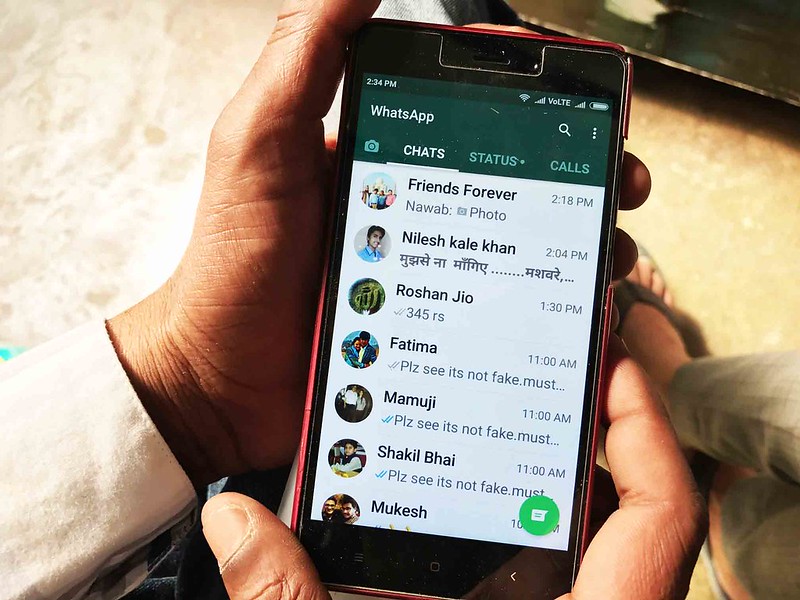 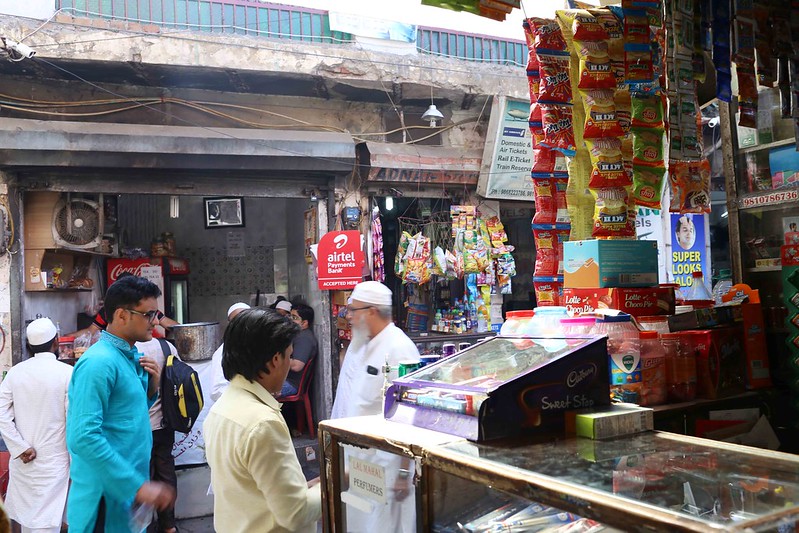 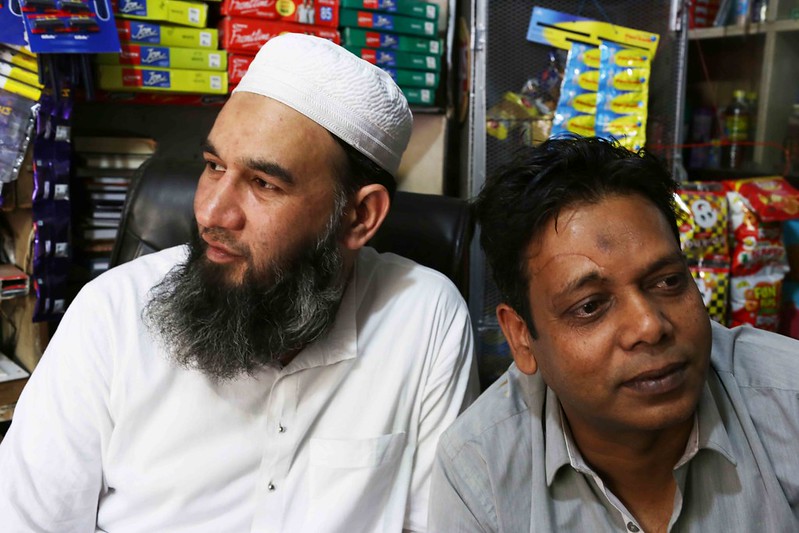 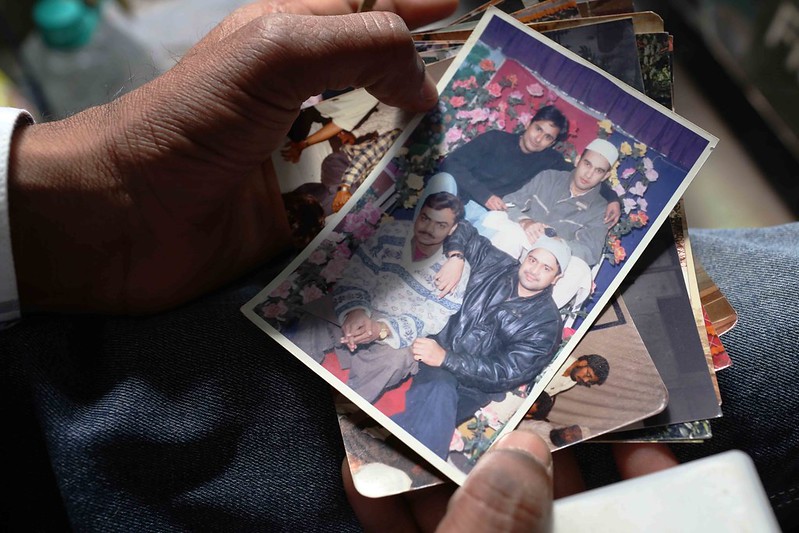 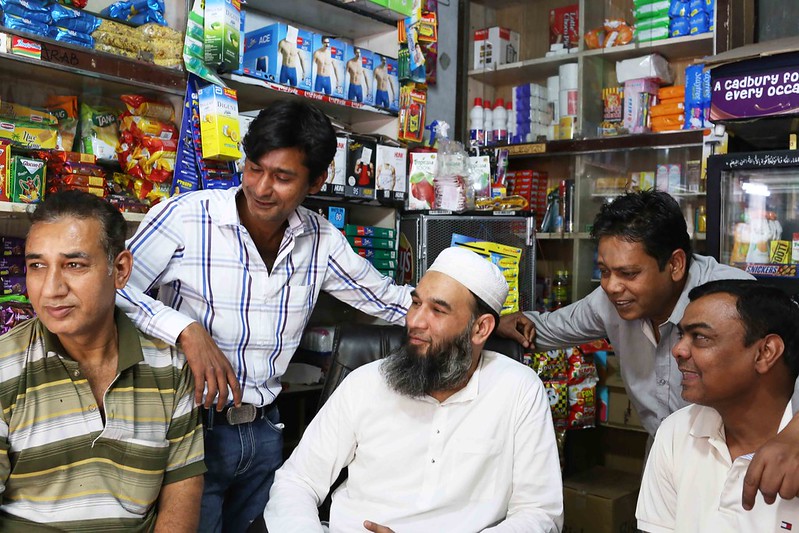 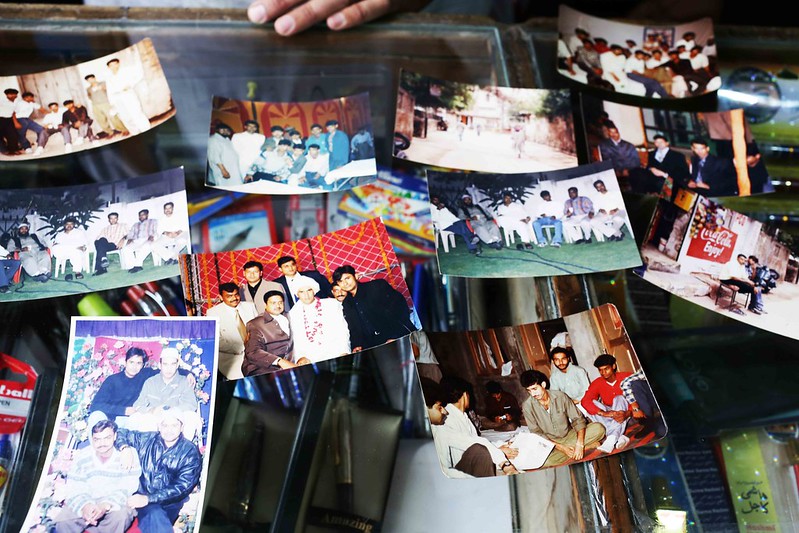 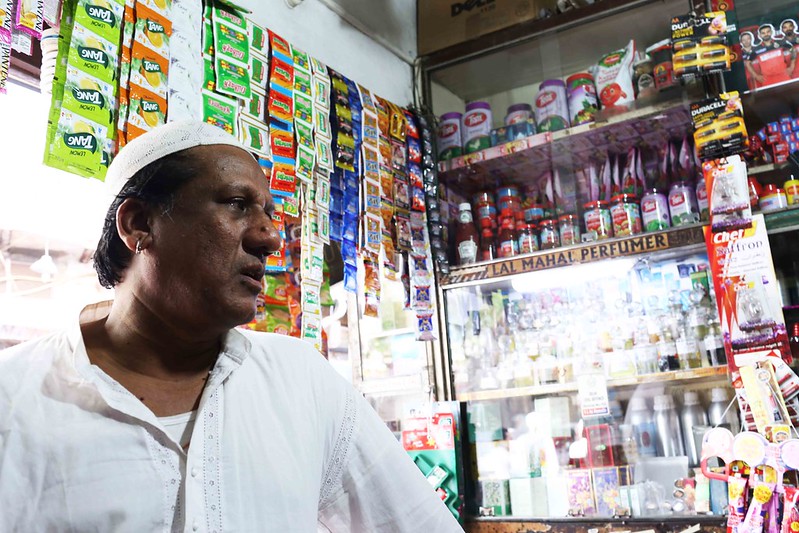 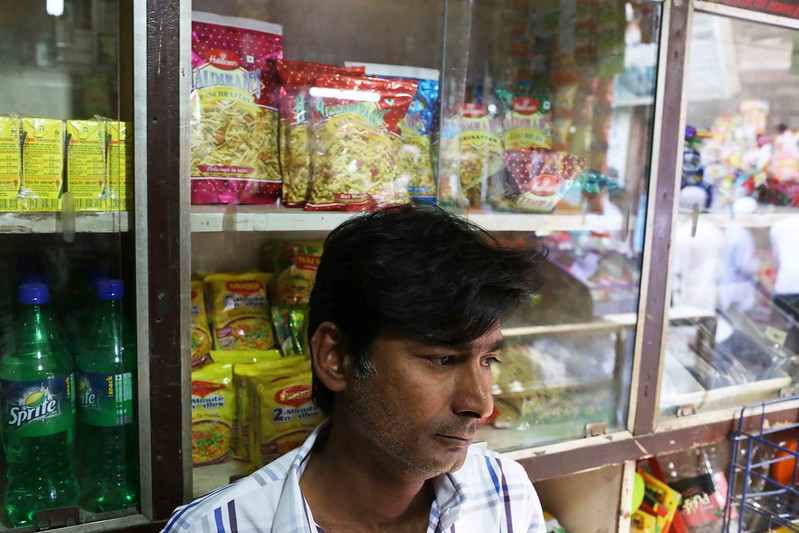 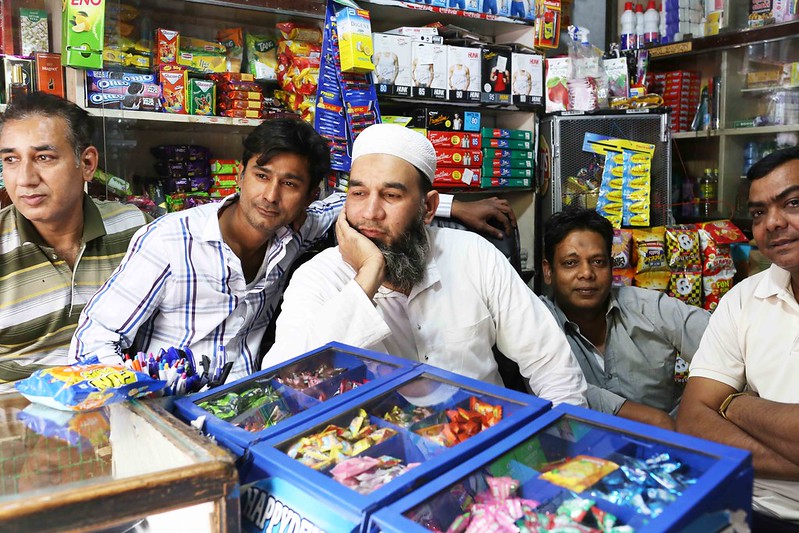