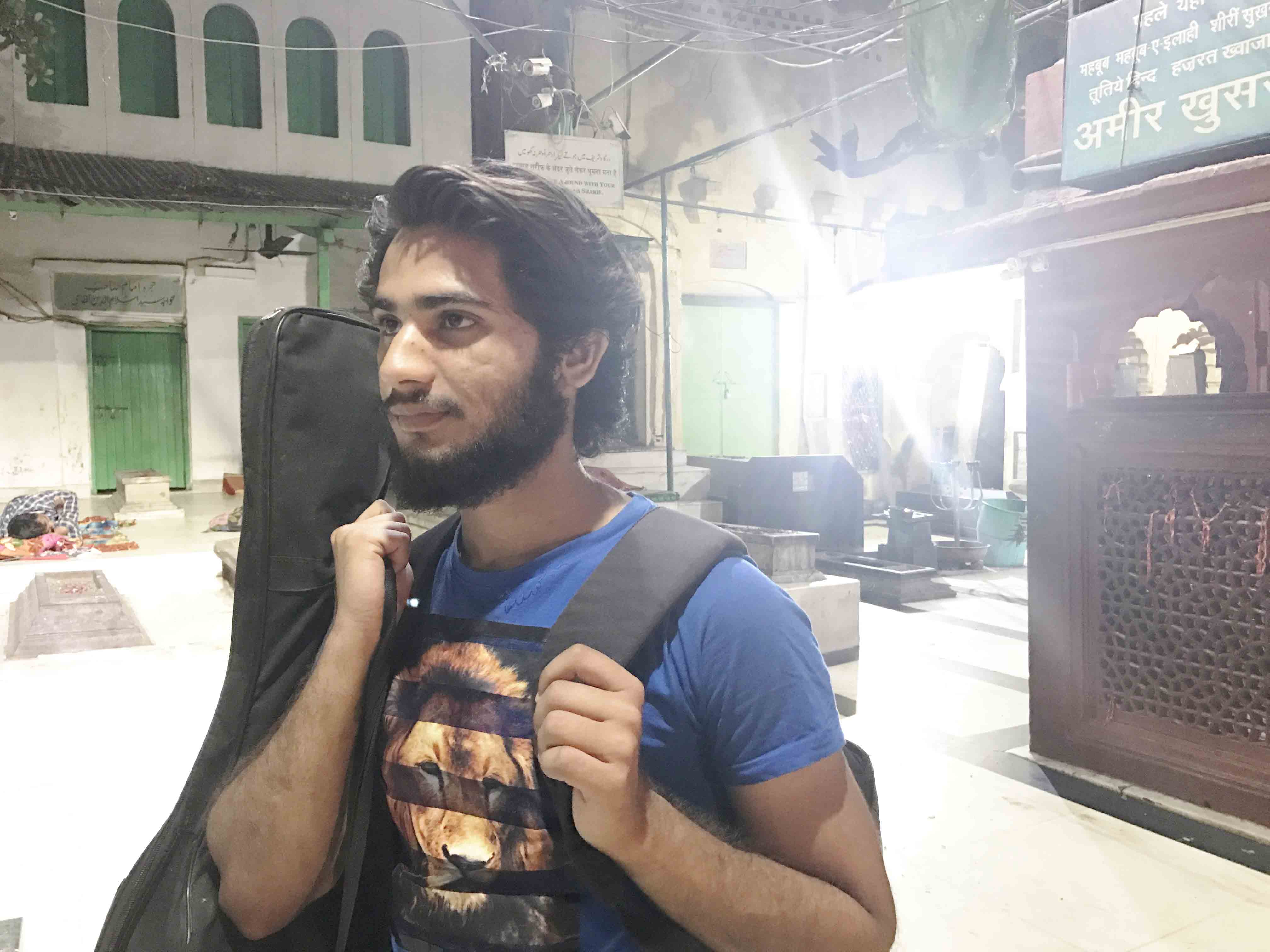 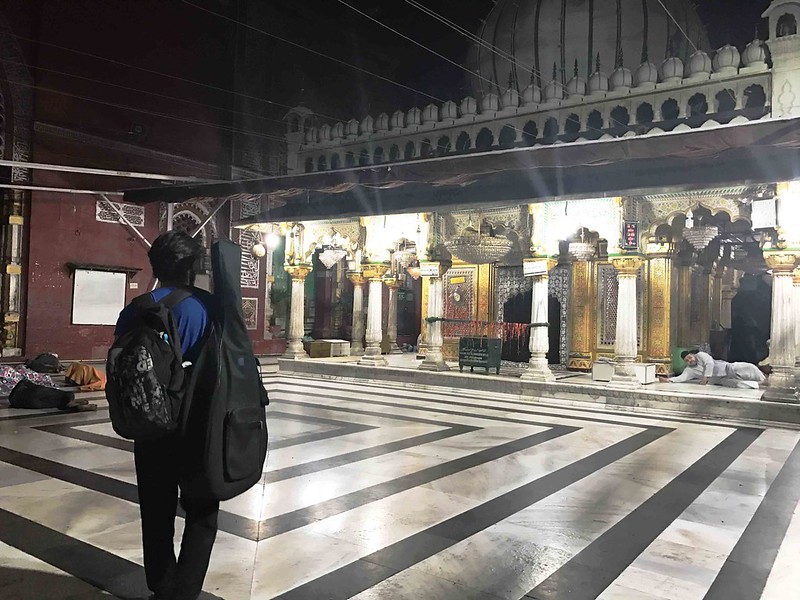 Sometimes the stuff you see in song-and-dance movies repeats itself in real life.

In 2011, Hindi film Rockstar depicted its hero — a young Delhi man played by actor Ranbir Kapoor — being forced to leave his home, along with his guitar, and finding shelter in the Sufi shrine of Hazrat Nizamuddin Auliya. In the film’s chartbuster qawwali, the hard-luck protagonist is shown sleeping in the dargah during the late hours of the night.

Well, during the late hours of a recent night The Delhi Walla saw exactly such a sight in Hazrat Nizamuddin’s shrine. A young man was sleeping on one side of the dargah’s courtyard, his head resting on what appeared to be a guitar case.

Suddenly a black cat (the shrine has many cats) leaped past and woke him up.

I asked him if that was indeed a guitar.

“I’m a guitarist, vocalist…,” he told me in English, haltingly.

This was 19-year-old Arshad Ali’s fourth night in the dargah.

“I left my home… Papa se meri banti nahi (I don’t get along with papa.)”

Mr Ali is from the nearby Dadri. His father, a businessman who runs a small hospital, was not happy about his only son taking up journalism studies at a college in Greater Noida. However, that was nothing against his disgust for Mr Ali’s passion for music.

But it was not easy to focus on Mr Ali’s story. His left arm was extremely distracting because of its oversized tattoo that says EDM. “It stands for Electronic Dance Music,” he said, adding he had got it done three years ago at a tattoo parlour in west Delhi’s Subhash Nagar.

A few days ago, Mr Ali told his father he was leaving the house for ever.

“Papa did not say anything.”

The young man picked up his guitar — but not his mobile phone — and rode off on his bike to a cousin’s place in Vaishali, a suburb just outside Delhi’s eastern limits.

The cousin handled Mr Ali’s delicate circumstances with a kind of sensitivity that only relatives are capable of showing. “He mocked me in front of his friends… I was humiliated… I left his place too.”

Mr Ali came straight to Nizamuddin’s shrine, a place he had often visited out of devotion to the 14th century Sufi mystic.

Besides his bike and guitar, the bearded runaway’s possessions included a torn pitthu bag, but its zip was not working. He was not worried. “It’s just four shirts, two pants and my bike’s papers.”

Mr Ali had only twenty rupees in his pocket.

How was he feeding himself?

“I get the langar khana,” he said, referring to the food that is served free in the dargah.

At a crucial point in his life, Mr Ali’s immediate agenda is to look for a job in “some international call center.” The long-term plan is to establish himself as a musician. He said he could perform qawwalis, Bollywood music and English rock.

Mr Ali’s quiet confidence was extraordinary, especially so because he had never performed in public.

He then went back to sleep, his eyes shutting down almost instantly.

In the film Rockstar, the hero goes on to become a rockstar. We wondered what would become of Mr Ali.

The following midnight, while walking aimlessly in the streets of Nizamuddin Basti, the village that circles the aforementioned Sufi shrine, I suddenly heard the soft strains of guitar music. Six young men of the basti– one of them is a butcher I’m friends with—were huddled beside Mr Ali. He was playing his guitar.

That was the future rockstar’s first public performance.

[This is the 132nd portrait of Mission Delhi project] 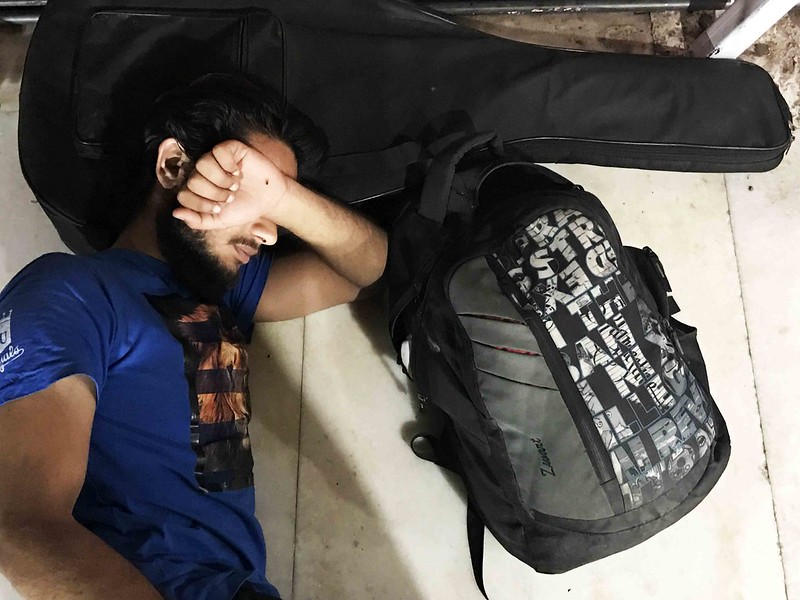 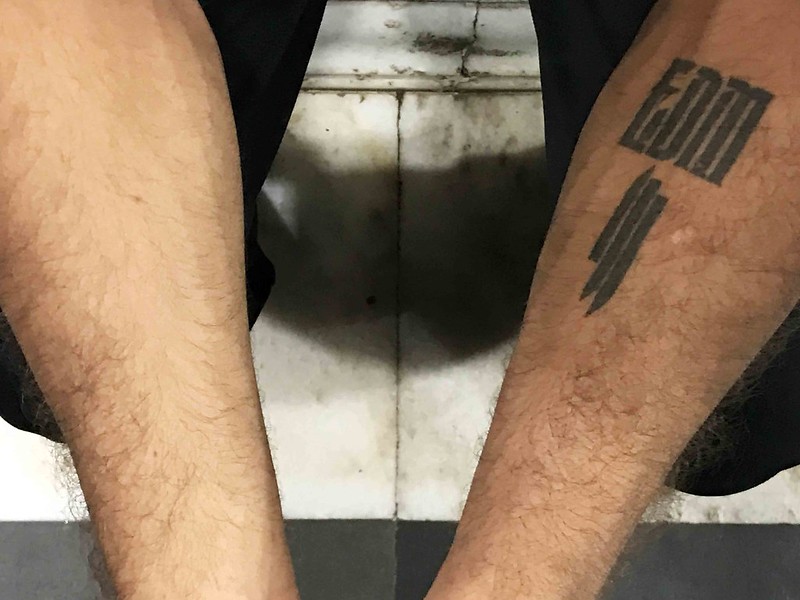 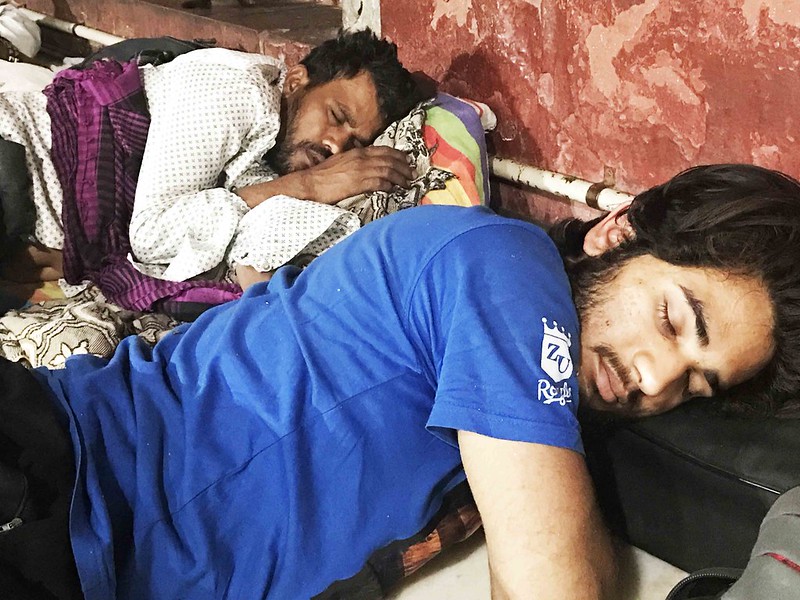 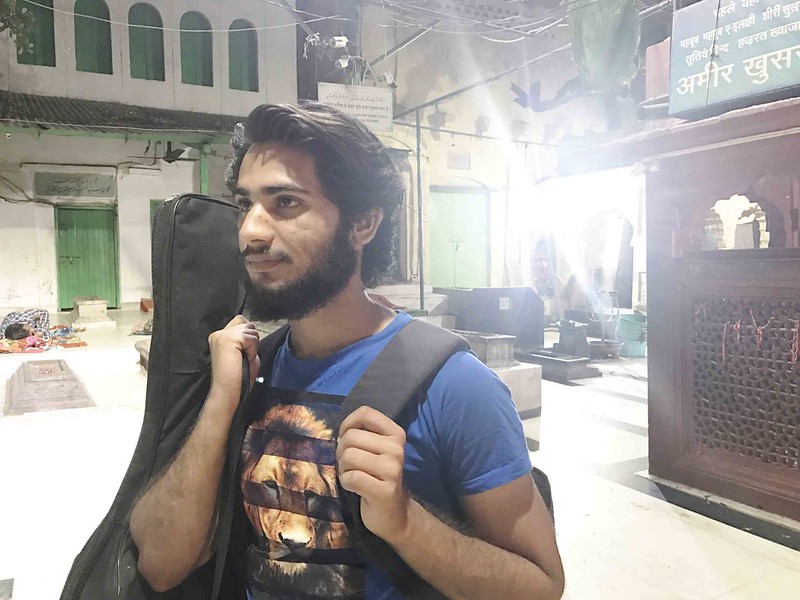 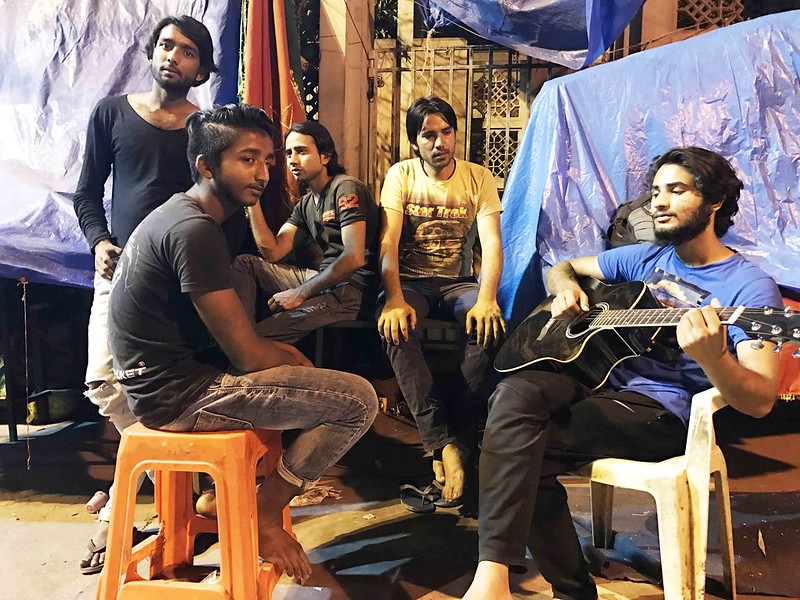