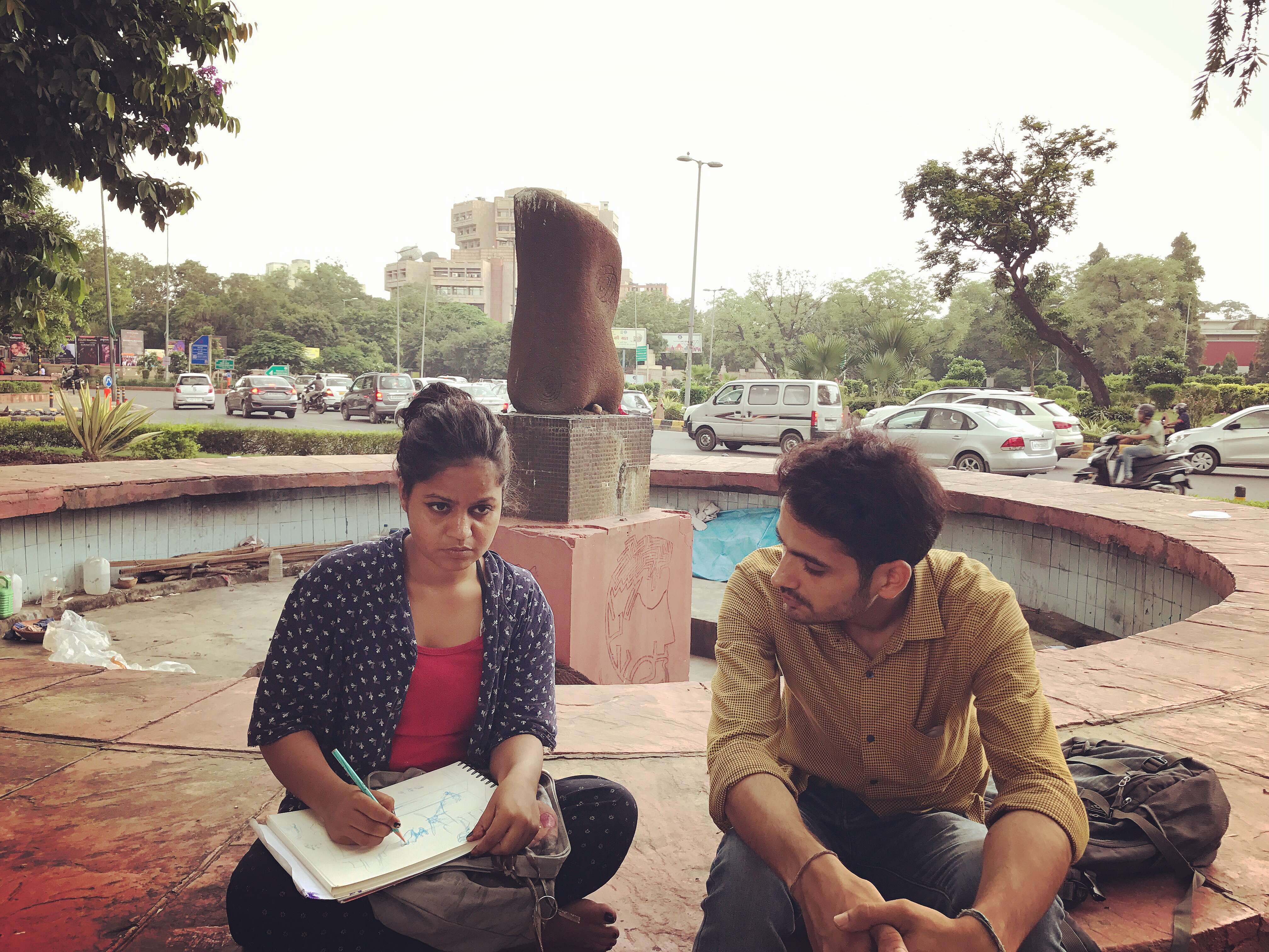 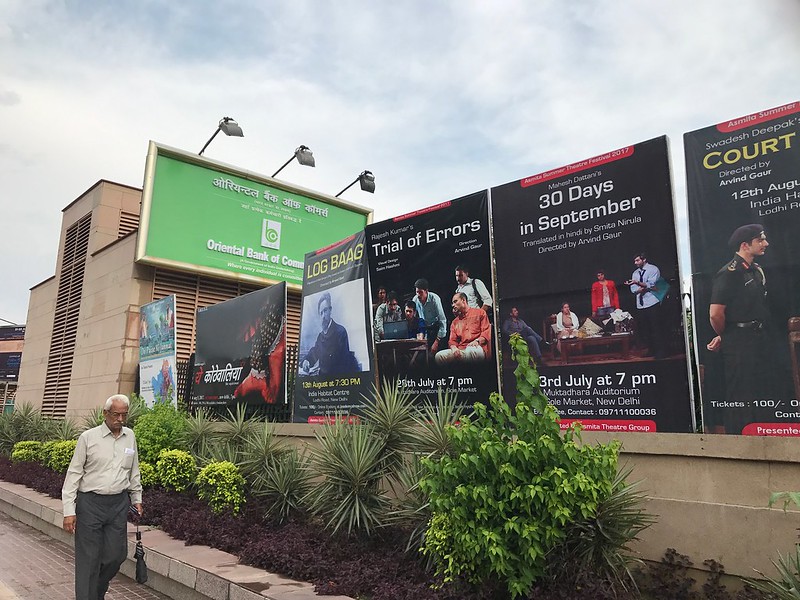 Inside the theater district’s heart.

A santoor recital. An art opening sundowner. A new play.

Been there, done that.

Mandi House, after all, is home to art galleries, concert halls, and the exalted National School of Drama.

Today, however, The Delhi Walla is experiencing Mandi House by staying out of its famous haunts. I’m even skipping the shami kebabs of Triveni Tea Terrace. I’m simply walking around the traffic circle.

Five roads radiate out of the roundabout. I start clockwise from Barakhama Road.

A strange modernist sculpture stands in the center of a dry pool. I can’t make head or tail of it — it’s like an installation fit for a biennale. Nearby, middle-aged men, bonding over a card-game, spot my SLR camera and warn me not to take photos. You see, they are “sarkari mulazim” (government servants) and they are at work.

But hold on. One man — not part of the group — is actually working. Mohsin is carrying what looks like a knitting needle. He inserts all of it into the ear of a totally calm man, who doesn’t flinch for a moment.

Mohsin is an ear-cleaner. He hangs around every day at Mandi House looking for customers (with waxy ears, I presume).

The area’s other workaholic is Ram Sharvan. His footpath tea stall — with its atmospheric silbatta (stone grinder for ginger) — has been here for three decades. The shack leans against the wall of the National Museum of Natural History, which was destroyed in a fire last year.

But why is the air on the other side of Tansen Marg smelling garlicky? I trace the source to Turant, a food van selling momos, chowmein and fried rice. The van looks as if it pulled over just this morning. But it has been here for over 25 years and has a cult status. A number of classical musicians who conduct training classes in the adjoining Triveni Kala Sangam order their lunch from here (they send their students to pick up the food, of course).

A lot of art-types also lounge around the van with their sketch pens and white sheets. I hover around a student from the Faculty of Fine Arts in Jamia Milia Islamia. Ekta Sharma is drawing with a blue sketch pen. She tells me that she likes to work here because people don’t bother artists like her. “They let me be,” she says.

I take the hint and quickly leave. We reach a tiny Sufi shrine on crossing Safdar Hashmi Marg — there is nothing here but a grave under a tin roof. A nameplate refers the place as the dargah of Hazrat Nanhe Miyan. Who was he? There is no way of knowing. Further down the lane, past Rajpal’s kachori stall, past Rakesh Kumar’s namkeen stall, past Dharamveer’s book stall, is the giant statue of Baba Banda Singh Bahadur, the “first sovereign king of Punjab”— according to the statue’s plaque. A woman is standing directly under the king, talking on her mobile.

The National School of Drama is across Sikandara Road. The walls are plastered with bills of forthcoming plays. A man carrying a tote bag is stopping in front of each poster. We spot a flier — a Ramlila production company is looking for women actors to portray the characters of Kaushalya, Kaikeyi and Sita.

Some of film world’s most acclaimed actors graduated from NSD. Perhaps I’m walking on the same path once traversed by Naseeruddin Shah, Pankaj Kapur, Irrfan Khan and Nawazuddin Siddiqui. This is the closest we Delhiwallas can get to Bollwood glamour.

On crossing Bhagwan Das Road we reach… well, Mandi House. This structure gives its name to the area. Now the headquarters of Doordarshan, it stands on the site of a demolished palace that belonged to the Raja of Mandi. Alas, the broadcaster’s building is so unchallenging aesthetically that I quickly cross Copernicus Road and reach our favourite place in Mandi House.

Here stands Pushkin. His coat buttons are open, his hands are crossed behind the back and his face is turned towards the traffic on Feroze Shah Road. The statue is like a city secret; it is so discreetly situated that unless you are not actively looking for the Russian writer, you will never be able to spot him.

Finally, I cross Feroze Shah Road and reach the beautiful Nepal embassy. A little park in front of the embassy gates is teeming with red flowers. I sit on a bench here and cherish the end of the walk.

Round the world in Mandi House 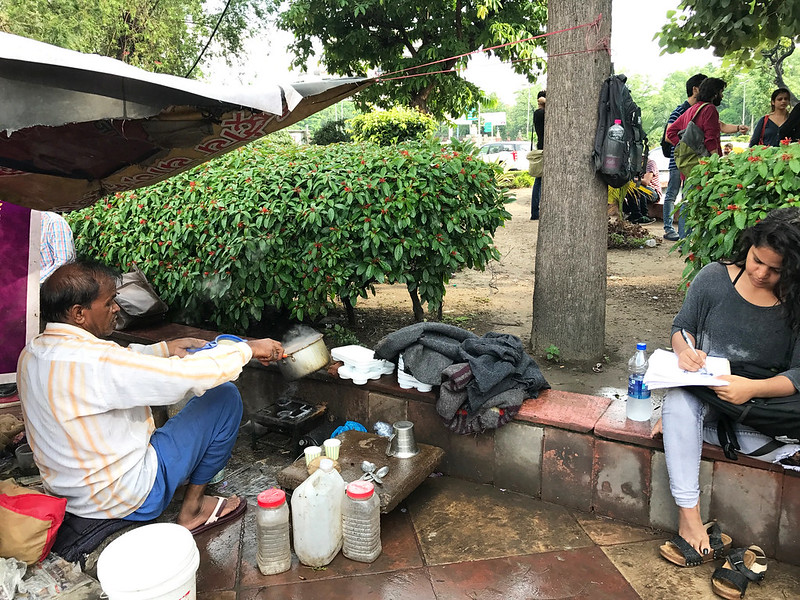 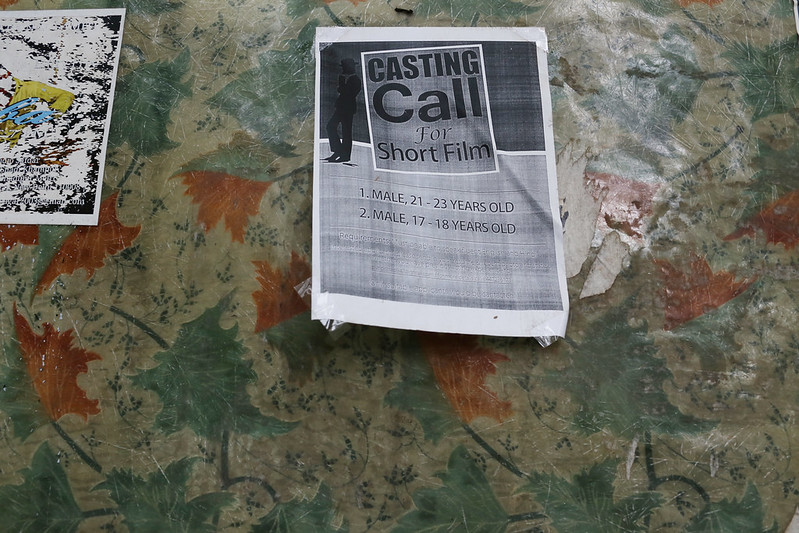 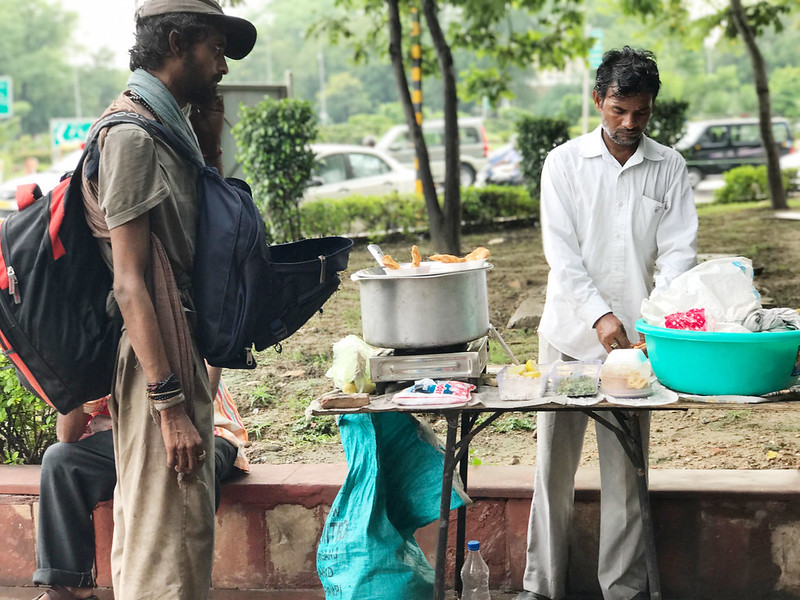 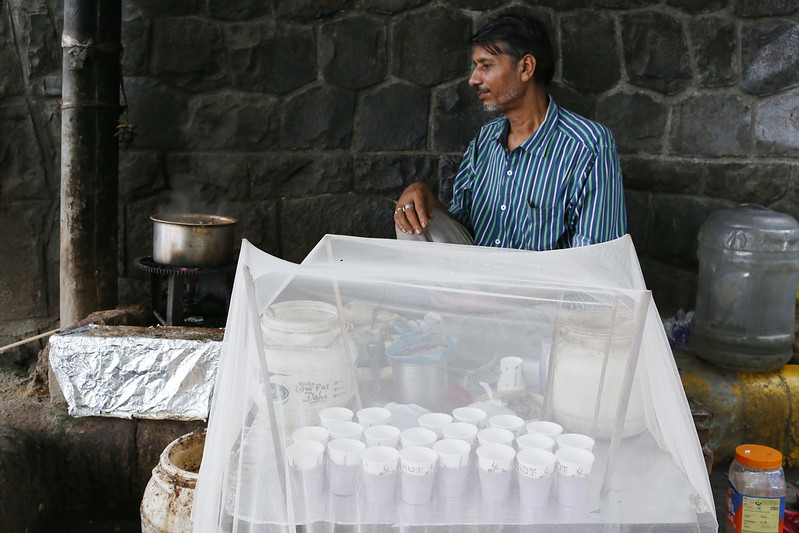 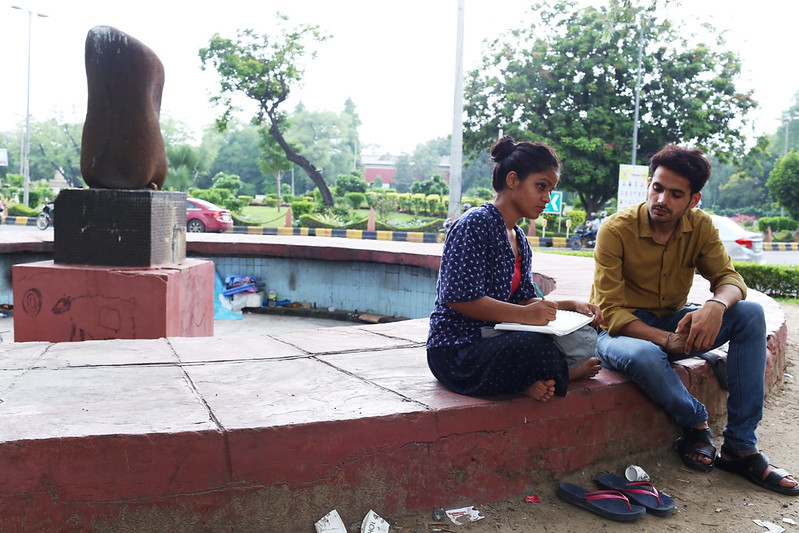 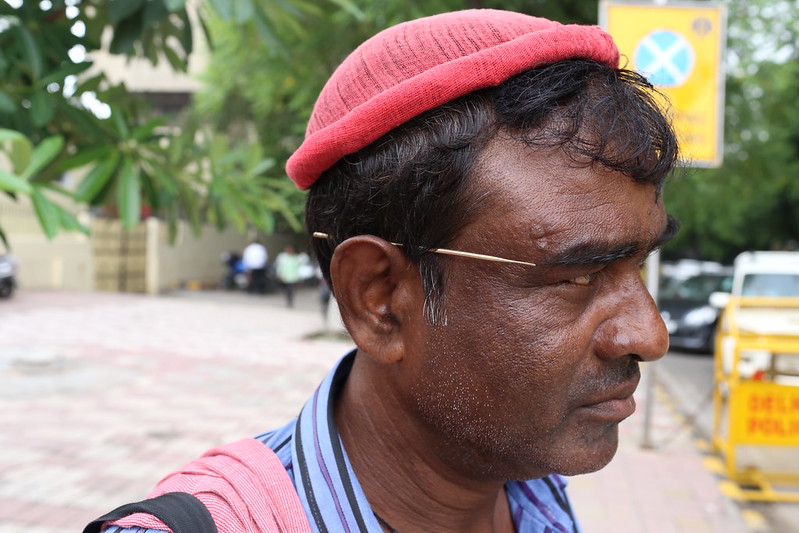 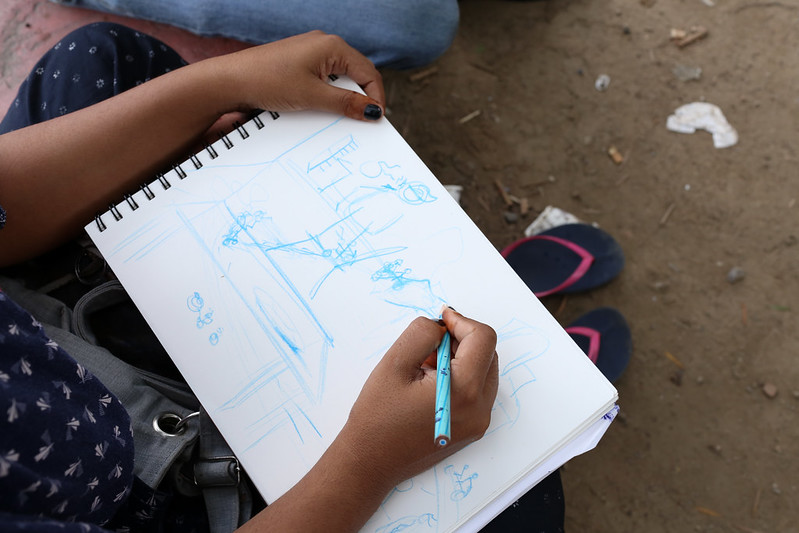 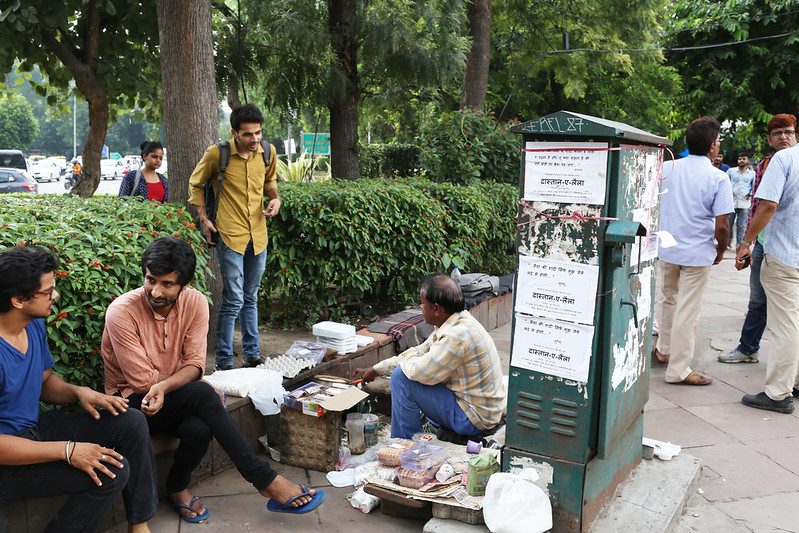 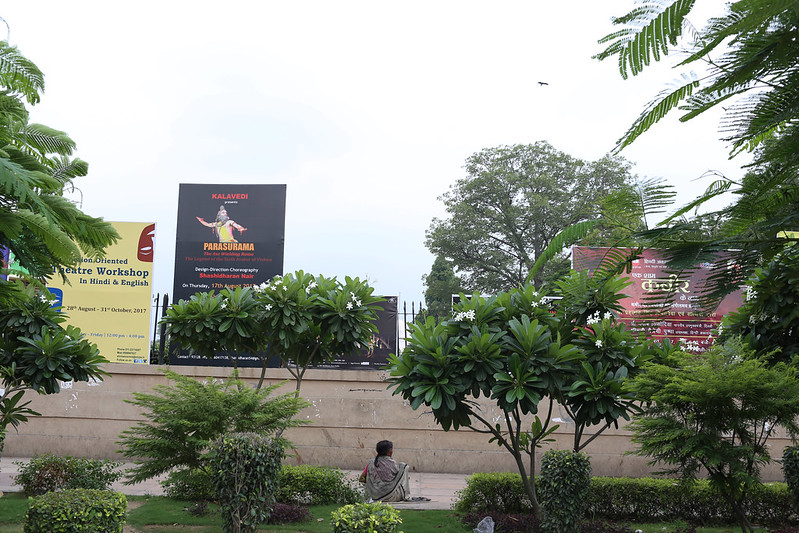 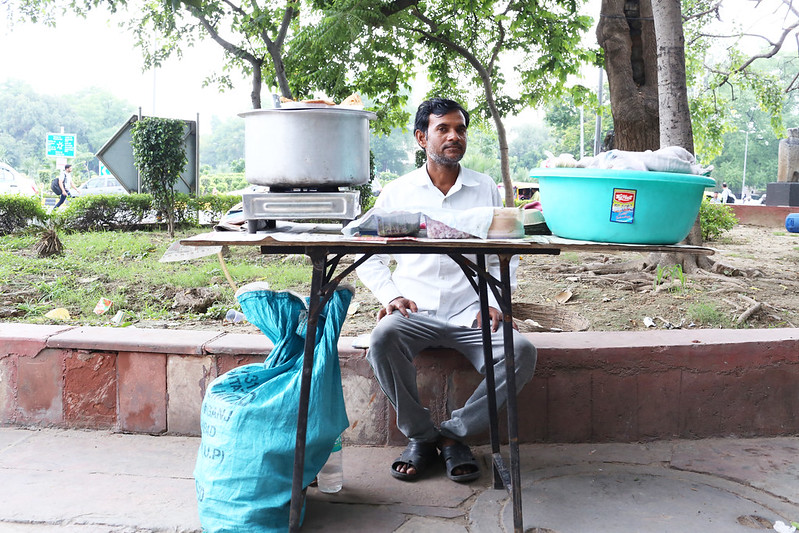 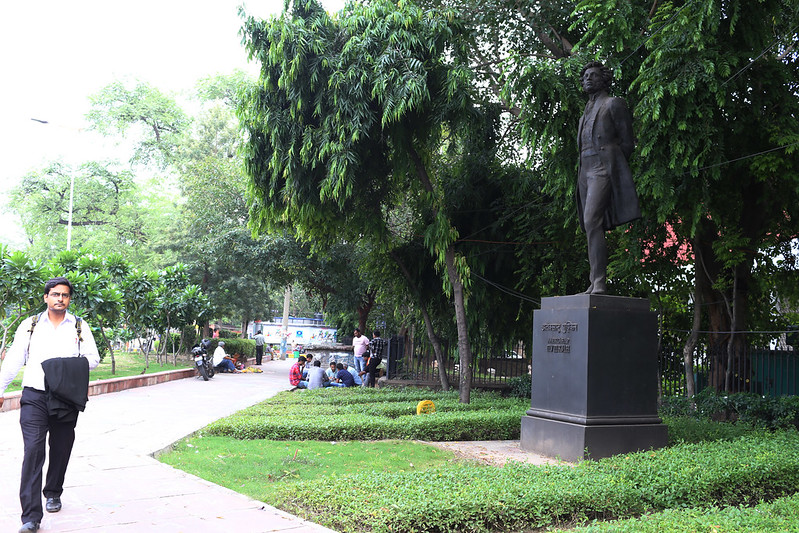 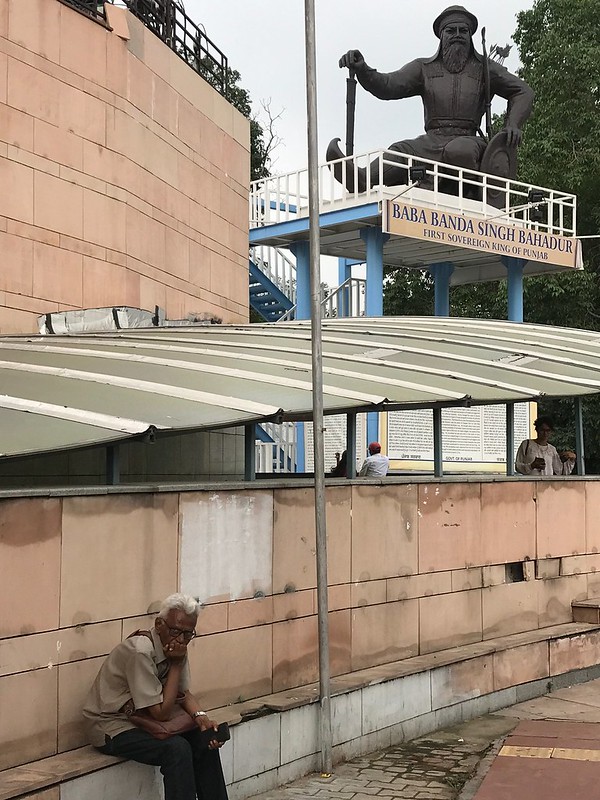 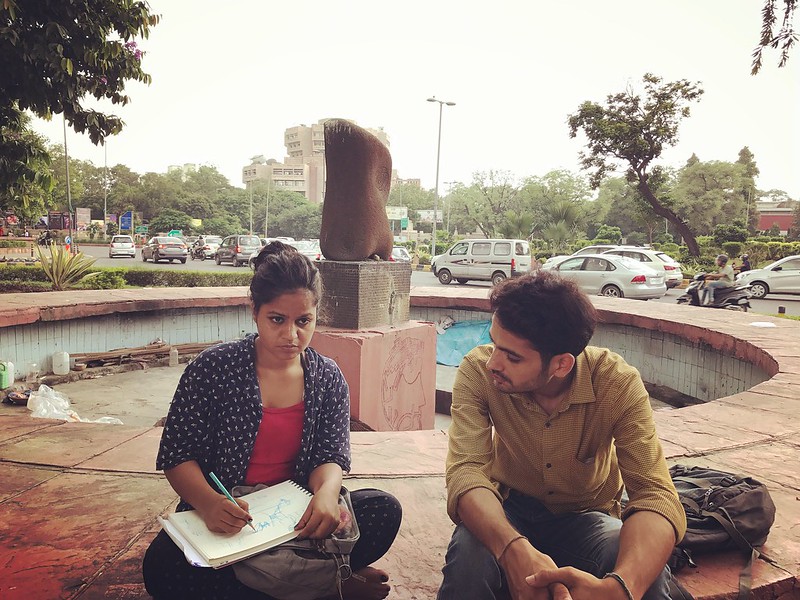