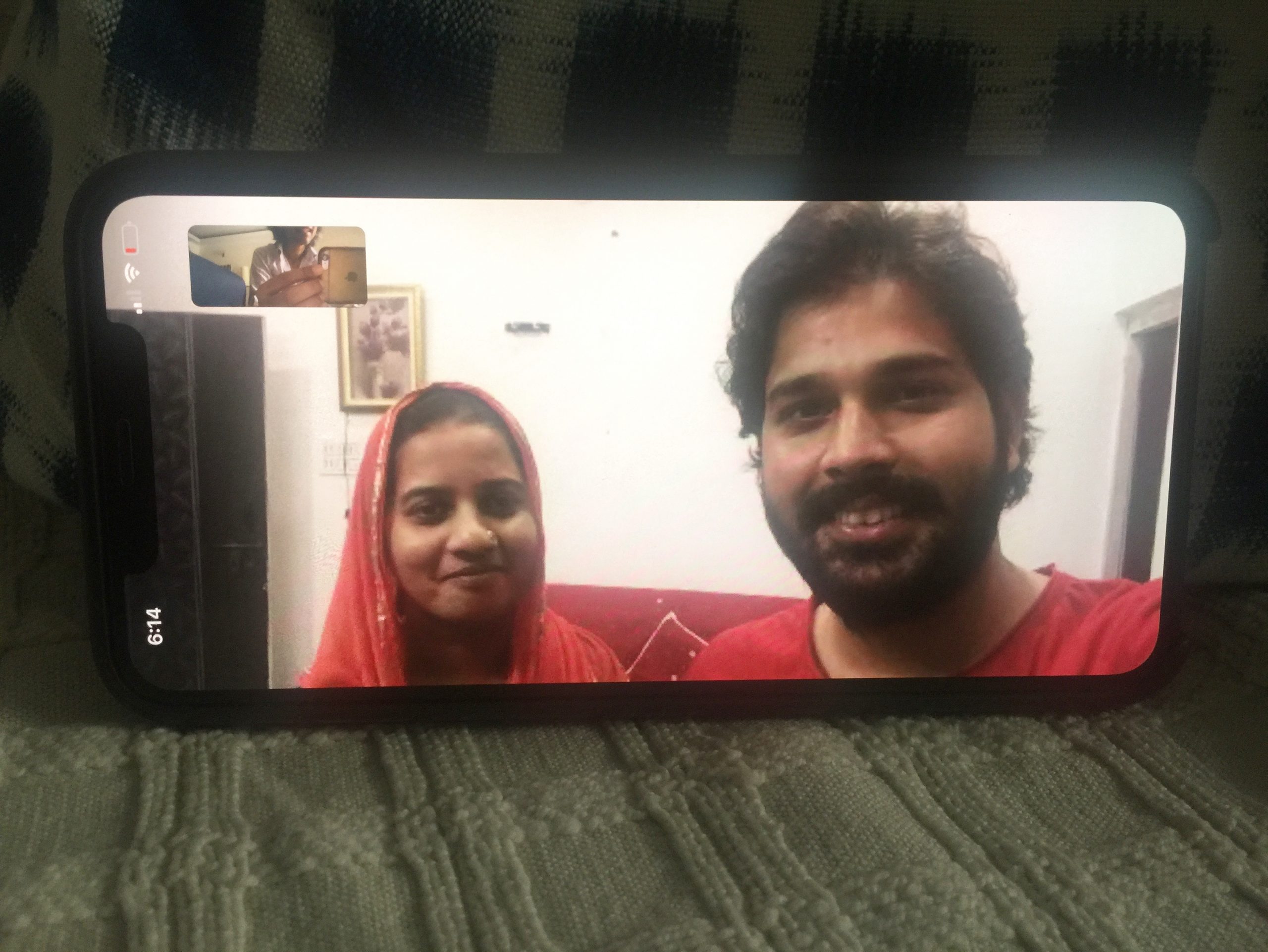 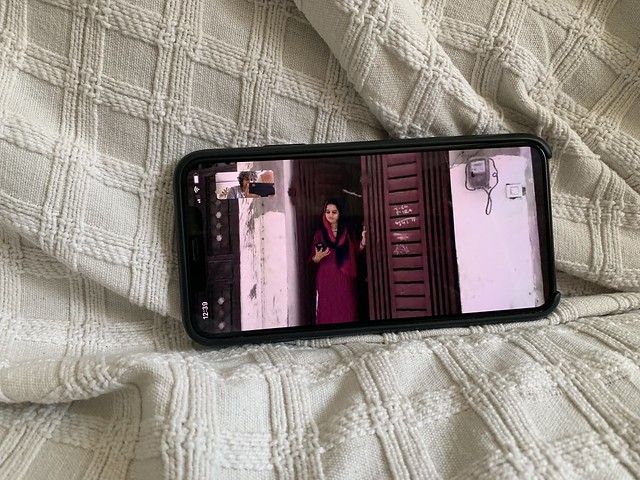 The coronavirus pandemic has irreversibly changed our civilisation. Even after it is all over, our habits and impulses might never come back to what they once were.

For instance — will we readily go to multiplexes again, and sit with crowds of hundreds to jointly experience the latest movie hit? Will we still stop by pavement stalls for impromptu snacks? And what about getting a haircut in a barbershop?

“I realize that, these days, even touching one’s face with one’s own hands has something scary,” says Bilal Ali. “And my profession is so much about touch.”

Mr Ali, 28, is a hair dresser. He works in a hair-styling establishment in a mall in Gurgaon’s DLF Phase 4 in the Greater Delhi Region.

Or rather: he worked.

“The saloon shut down one day before the lockdown, and I came back home,” he says, talking on Whatsapp from the isolation of his house in Pakbara, a town near Moradabad in UP. The pictures are taken through the phone screen that connects him to The Delhi Walla.

Despite the obvious vulnerabilities of his profession in view of the pandemic, Mr Ali isn’t looking worried. With his handsome young face, coupled with a smart hairstyle (“all natural”), his demeanour is filled with happiness and good health. Indeed, he thinks of himself as a “successful man.”

One of the reasons of his satisfaction is the house he is currently living in. It is very small, with just two rooms, “but it is mine… I built it with my own earnings in 2016.”

Mr Ali’s native village is in Rampur district. “It’s very remotely situated… in the old days, in order to come home, I would board a bus at midnight from Delhi’s Anand Vihar bus adda and reach Rampur in four hours, but then I would have to wait for a lift for hours… no bus or auto goes to the village.”

The ambitious man was determined to shift his folks—father and sister— to a more accessible location. But for that, he first had to build a career. He thus enrolled himself for a hair styling course at an academy in Delhi’s Connaught Place, and in 2011 he started working in Gurgaon. His hard work and savings enabled him to buy a plot of land and build a house for his family in this Moradabad township.

“Owning a house in Gurgaon was out of the question — too pricey,” he notes.

Mr Ali’s family now lives in the dream home, while (until the lockdown started) he shared a one-room dwelling with two other hair stylists in Gurgaon’s Maruti Vihar.

Talking of his place in the Millenium City, Mr Ali looks grim for the first time. “The landlord called recently. He probably wants me to send the monthly rent through bank transfer…. I told him we will talk after my return.”

Giving a tour of the house he helped build, the hair stylist says that “the success I have achieved is because of my work in Gurgaon… but now there’s so much uncertainty… mushkil toh baregi (problems will increase)…”

But he forces himself to look cheery again. “I have hope… I pray daily, and I’m fasting,” he says with reference to Ramzan.

Things have been good to Mr Ali before: just last year, he got hitched to a girl in a “love-cum-arranged marriage.” She now stays with his father and sister in Pakbara.

And things will keep going well, he hopes. They have to.

Now Mr Ali poses for a picture with his wife, Reena. Later, he Whatsapp an image from his workplace taken during the pre-lockdown days where he is posing with colleagues Anil Kujur and Mandeep Kumar.

[This is the 299th portrait of Mission Delhi project] 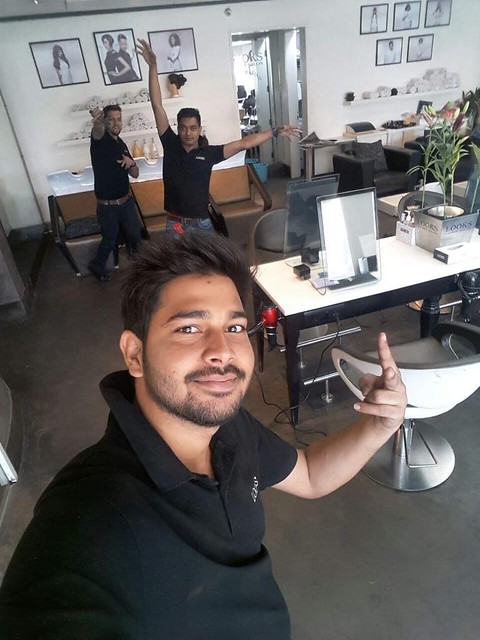 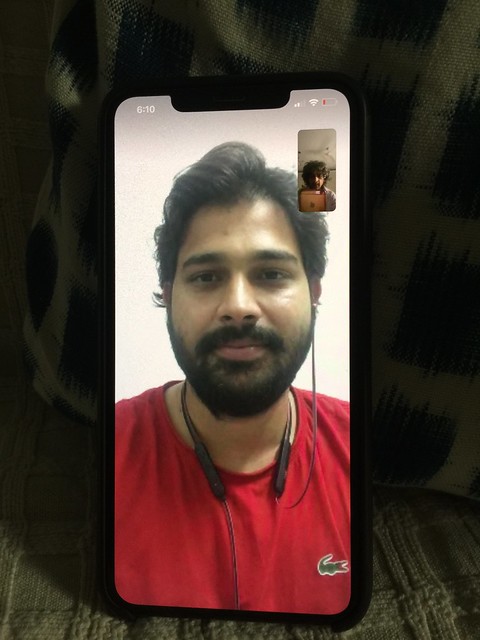 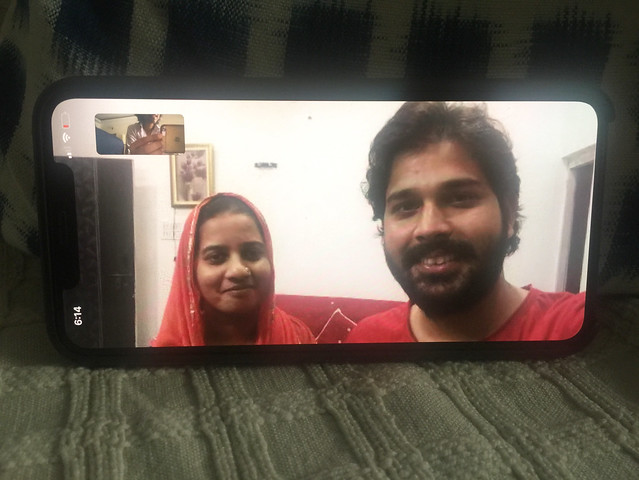