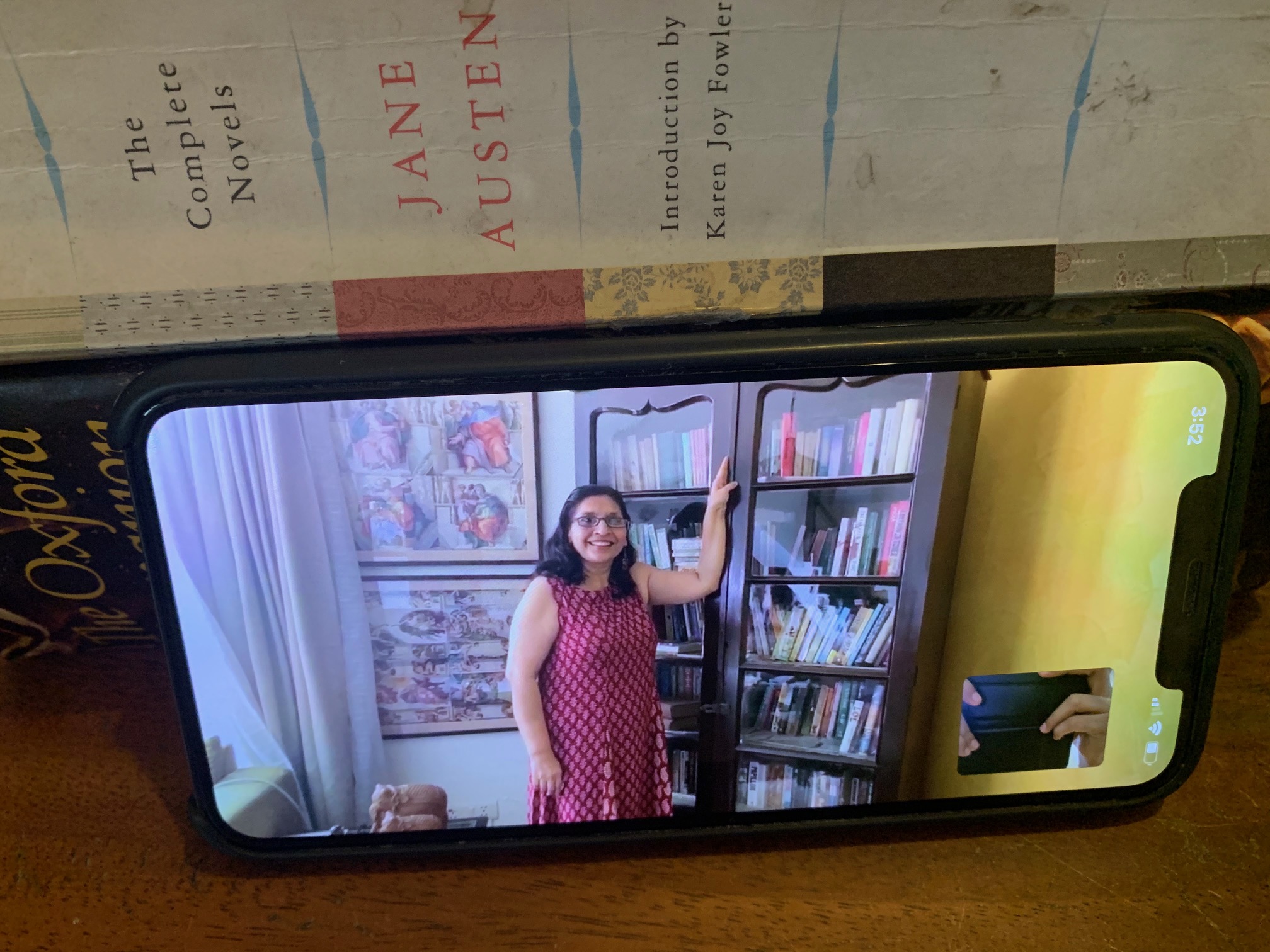 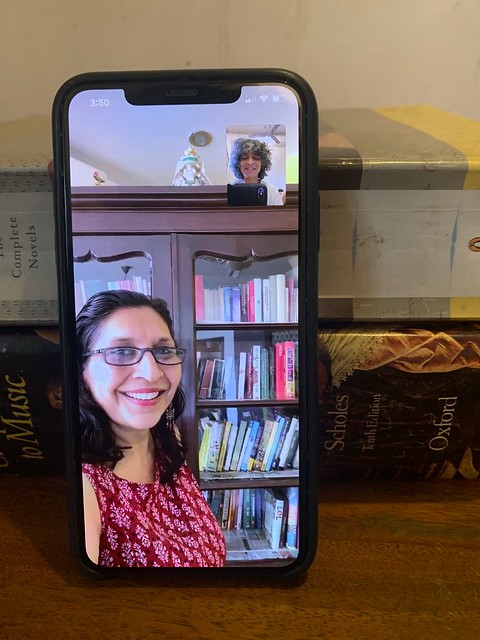 In these days of self-isolation, we all need some sort of escape. Jayanti Pandey, 55, can obviously not take a flight for some time to Cambodia or Dubai or Russia–her last three trips abroad. But if she truly yearns for a getaway, she can sit in her drawing room and stare at her venerable Burmese teak bookcase.

“It’s so understated, so simple, so much taller than me… takes me to my old days in Calcutta,” gushes Ms Pandey, explaining she had got the case from that city. A career professional who was busy running her travel company in the BC (before corona) era, she is chatting on WhatsApp video from her 22nd floor apartment in Gurgaon’s DLF Phase 4, in the Greater Delhi Region, that she shares with her family.

Only a while ago Ms Pandey was in distress because an AC had suddenly stopped working, but talking of the glass-fronted book almirah lulls her into calmness. She could as well be re-living her beloved Calcutta days.

Ms Pandey lived with husband, Atul Joshi, in the West Bengal capital during the late 1990s. “We were in Middleton Street, which wasn’t far from the elegant Park Street.” Her sprawling apartment had a colonial-era feel with its high ceilings, tall windows, white columns, wrought iron balconies, and vast courtyards. “I would feel like a memsahib,” she recalls, laughing. The couple obviously wanted to dress up their huge home with the kind of furniture it deserved. “But we also didn’t want to buy too many things.” Her husband had a transferable job; they wouldn’t live in Calcutta forever and such big houses would not be available in other cities. Whatever, Ms Pandey soon discovered a very common Calcutta phenomenon — auction houses where you could buy beautiful secondhand household stuff by bidding. So, since “a little money in Calcutta goes a long way”, Ms Pandey swiftly filled up her pad with all sorts of large and small knickknacks—center tables, side tables, glass cabinets and so on.

Plus, in Calcutta, it was commonplace, at least in her years there, to get things on rent. “And that’s when we discovered this bookcase buried under a mountain of other stuff in a high-end furniture rental store on Russell Street.”

The shop owner was a stylish man who would wear a dhoti and kurta “like a typical Bengali bhadralok.” He loaned the bookcase for a rent of 100 rupees monthly.

Showing it on phone, Ms Pandey mentions that “the case has six shelves, with each shelf packed with two rows of books, thouigh there is one more row of empty space left… but we want our books to breathe.”

Her daughter, she notes, was born in Calcutta a year after the bookcase became a family member.

When they were leaving the town after four years and it was time to return the rented furniture, Ms Pandey wanted to retain the bookcase “for it had become so much a part of our life.” The aforementioned bhadralok flatly refused but one afternoon he called on phone willing to sell it since “he said we were sincere book lovers.” Both she and her husband rushed to the shop, deciding on the way that “we wouldn’t bargain about the price.”

More than twenty years have passed since then. Today Ms Pandey is gazing upon the familiar case as wondrously as a museum visitor does upon a Harappa Valley artefact. “Just looking at it takes me back to our interactions with the Calcutta Bengalis and their rich culture, their immersion in books, music and art.”

By now the Calcutta bookcase has firmly set its roots in Gurgaon, too.

“The books in it keep changing as our collection grows; a lot many in it will be remembered as Gurgaon buys.”

The case is opened “very fondly” every few days. “Its glass panes, when clean,” Ms Pandey points out, “reflect the sky, our plants and our home.”

From Russel Street, to DLF Phase 4 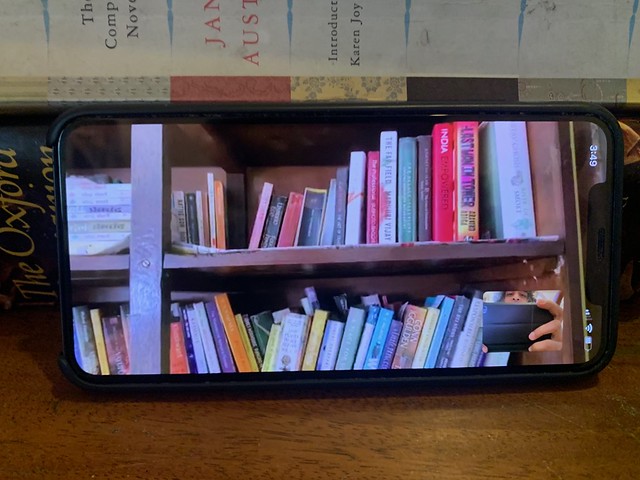 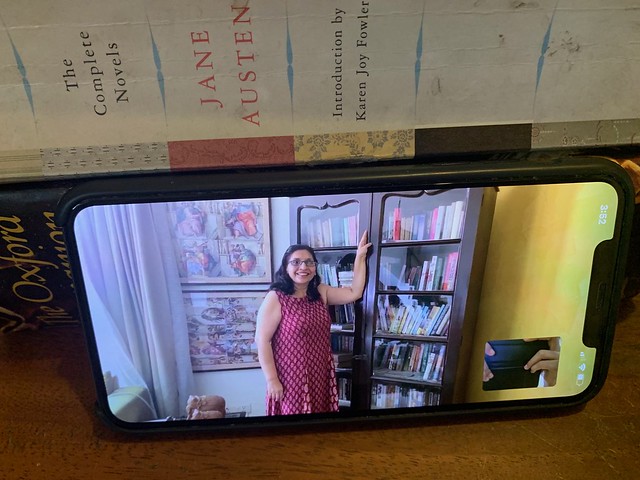