THE noteworthy matter of interest about Home is that it happens to be the first novel to have come out of Random House India. The binding is fine, the paper is tough and the cover picture is evocative. There is gold lace attached to a fine-looking built-in bookmark. The book, like every new book, smells of fresh wood shavings. Besides, Random House did good homework before pinning down on who ought to be the author of the first book of its newly launched Indian imprint.

Manju Kapur — the author of Home — has respectable credentials. She is a professor of English Literature in the up-market Miranda House — a prestigious college for girls in Delhi, one of whose famous alumni is internationally acclaimed film-maker Mira Nair – the director of the international art-house hit Monsoon Wedding. Also, Ms Kapur’s first novel Difficult Daughters, published when she was 50, was sufficiently well-written for its author to be awarded the Commonwealth Writers’ Prize in 1998.

Home is her third novel and after an initial awkwardness in tone, it settles down to an engrossing, simple and quick read. This is the story of a large joint family of Delhi that has a flourishing business in the clothes trade. The household of Banwarilals have a fancy garments showroom — selling bridal clothes etc. — in the bazaar of Karol Bagh, Delhi’s chief shopping destination for middle-class Indians.

The novel starts with two sisters: one is attractive and the other merely plain-looking. The fairer Sona is married to the Banwarilal family while the unlucky Rupa is attached to a junior government officer of no consequence. 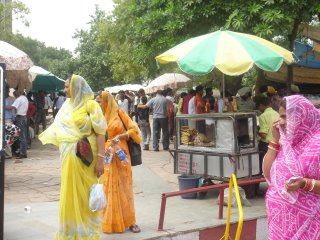 The Ladies of Delhi

In the first few pages the story traces the lives of these two sisters before it finally makes up its mind and shifts focus entirely to the goings-on in the Banwarilal family. Some more episodes of manipulations and politics of the joint family, and of the tale, diversify into the second generation when Sona gives birth to children after ten bitter years of barrenness. The sister Rupa however stays childless, but in many ways remains much happier.

The plot then twists around these second-generation people, but not before causing a little perturbation to this critic. While most of the characterizations are finely etched, it is difficult to sympathize with any of them. The sisters are selfish. The husbands are lethargic. The mother-in-law is a sassy old woman. The family patriarch is too mild. The children are self-absorbed and conventional.

There were encouraging possibilities of developing some empathy with a second-generation son — the only child of a deceased Banwarilal daughter dumped by her drunkard husband back into the family after her suspicious death — but it is spoiled when he starts sexually abusing his cousin sister. However, in spite of many characters and the sub-themes of various lives, the novel finally lurches into a single strand and fortunately stays there.

The story that had started with the tale of Sona and Rupa finally finds its calling in Nisha – Sona’s daughter who spends her childhood, scarred by incestuous abuse, at Auntie Rupa’s home. But it is her later pursuits in life – studying English Literature in an university, falling in love with a low-caste boy, forcefully standing up to her conservative family, despairing at being jilted by the lover, her courage in struggling with the meanness of life, her attempts at finding her place in an uninformed society that refuses to recognize the promise of her merits, her petty jealousies, unarticulated complaints and simmering frustrations that inevitably accompanies a life riddled with disappointments — that become central to the concern of the readers.

Home quite fascinatingly, if not very eloquently, shows the choking closeness and destructive limitations of Indian family values. It is a closet dark world where any hint of individual expression is swiftly trampled to death, to be substituted with deadened conformity.

But despite the forlorn lives of its characters, Manju Kapur’s novel has an undertone of humor that comes across effortlessly, an attribute that must be traced to the easy style in which Ms Kapur frames her sentences and to the uncomplicated narrative in which she structures her plots.

Perhaps inspired by Jane Austen, Ms Kapur also throws in some of her own comedy of manners as she very seriously describes in elaborate lengths the absurdities of traditions of middle-class housewives who have nothing better to do than to force young unmarried daughters to observe hunger-fasts for the long life of their future husbands.

Although it may be true that the novel stays clear of any great bombast or grandstanding in its theme and has not been touted about in the newspapers as the next best thing after Arundhati Roy’s The God of Small Things (so typical of any new Indian novel in English), it still can not be denied that with a beginning that reminded this critic of the two sisters of Sense and Sensibility, a middle portion that evoked the sad humor of the Tulsi family of A House for Mr. Biswas and a concluding part that resembled the disillusioned life of Catherine Sloper of Washington Square, Home is a worthy Indian debut for Random House to publish and a fitting piece of writing for a reputed English Literature Professor like Ms Manju Kapur to be deservedly proud of.

← Photo Essay: A Short Walk in Connaught Place
A Dutch Diplomat Calls Delhi Filthy, and Its People a Nuisance →