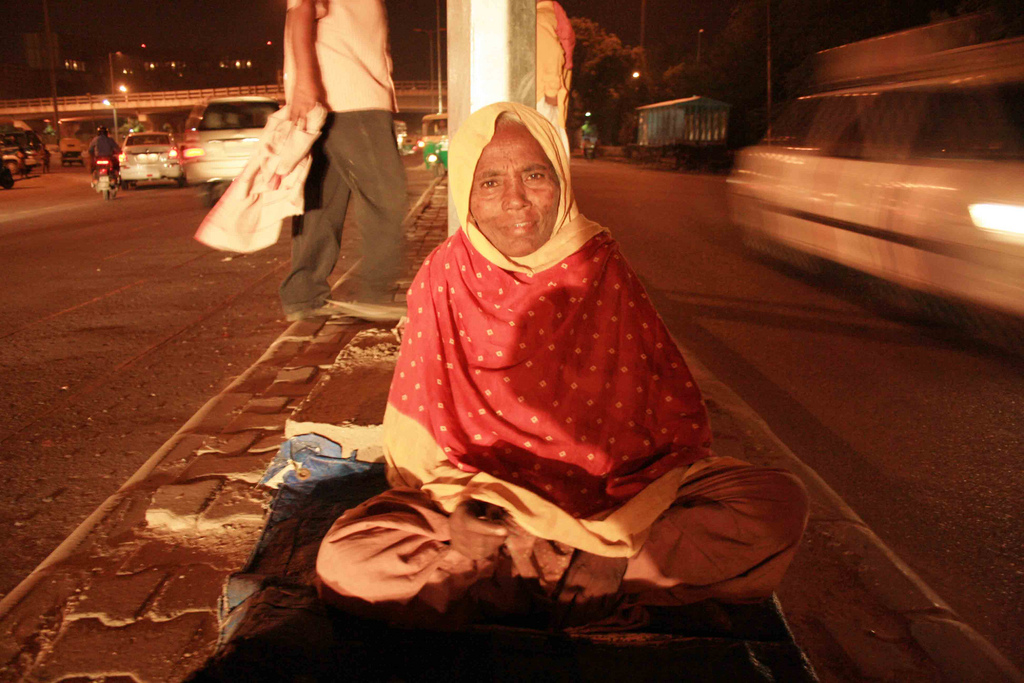 Turning to her left, she quietly listens to the ear-splitting roar of an incoming Blueline bus. The bus goes away but there is no silence. Cars are driving down one after another on her right. Noor Bano, 58, is, however, not looking harassed. She smiles at The Delhi Walla. I met her on the divider of the Lodhi Road.

Being homeless, sleeping on pavements, wearing the same clothes continuously for a month… no one willingly choose to live such a life. But the grey-haired Ms Bano is fine with the deal. “It’s ok,” she says. “I’m used to it.” For more than twenty years, Ms Bano has been sleeping on this divider in Lodhi Road, opposite Aap ki Khatir, the popular kebab joint in Nizamuddin Basti, a 14th century village in central Delhi.

Once Ms Bano was a girl in Hyderabad, Andhra Pradesh. She had parents, two sisters, a brother. Her home had walls, windows, and a roof. After marrying Alam Akhtar, a rickshaw puller, she moved to Delhi. The new life was good. They had a house in Nizamuddin Basti. There was a bed with pillows, a shared toilet; a corner in the room was converted into a kitchen, complete with a stove and masala boxes. In that house Ms Bano gave birth to two sons. Her younger sister, too, was married in Delhi.

The bad days started with Mr Akhtar’s ‘gas problems’ that led to his death. In no condition to pay the room rent, Ms Bano had to move into the road with her two sons.

Why she did not find work instead? “Son, see that hotel,” says Ms Bano pointing towards the luxury resort Aman where a regular room cost $550 a day. “That used to be a park and one day when I was entering it, I was hit by a scooter.” Ms Bano shows me her paralyzed left leg.

Surely she could have found some shelter. After all, her sister lives in Lal Kuan in Old Delhi. “Being the eldest, I can’t go to her place.” Does the sister visit her? “No, we haven’t met for a decade,” Ms Bano shakes her head.

“I never beg,” she suddenly says. “Sometimes people give me money and sometimes my sons find work in a tea stall or some such place.” This way she makes around Rs 50 daily.

As we talk, the night traffic whooshes past with great speed and noise on both sides of the divider. “I don’t think any bus or car would run into us,” assures Ms Bano on sensing my alarm. “These things never happen.”

What does happen is the occasional drive by cops to clear the divider off beggars. It usually takes place around 2 am when a sleeping Ms Bano, along with other homeless people, would be ordered to leave the road. She would then go to sleep under the nearby Oberoi Hotel flyover. That is her second home, more so during the monsoons. It may become her permanent home for the road divider is to be demolished and rebuilt in preparation for the 2010 Delhi Commonwealth Games. Trees will be planted where Ms Bano sleeps.

While Ms Bano have a bed sheet rolled out on the divider, she owns just a single set of clothes. “This is all I have,” She points, without self-pity, on her salwar-suit and dupatta. Each morning she walks into a public toilet to have a shower and to wash her clothes. While waiting for them to dry, she wraps herself in the dupatta. One day the salwaar kameez will turn into shreds. “Someone will then give me another pair,” Ms Bano says.

Having no friends, Ms Bano passes her day hours sitting listlessly on the roadside. “Don’t you get bored?” She laughs and says, “Then I start praying.” But that can’t beat loneliness. “Alone I came out of my Amma’s womb,” Ms Bano says, “Alone I’ll leave this world.”

[This is the 26th portrait of the Mission Delhi project]