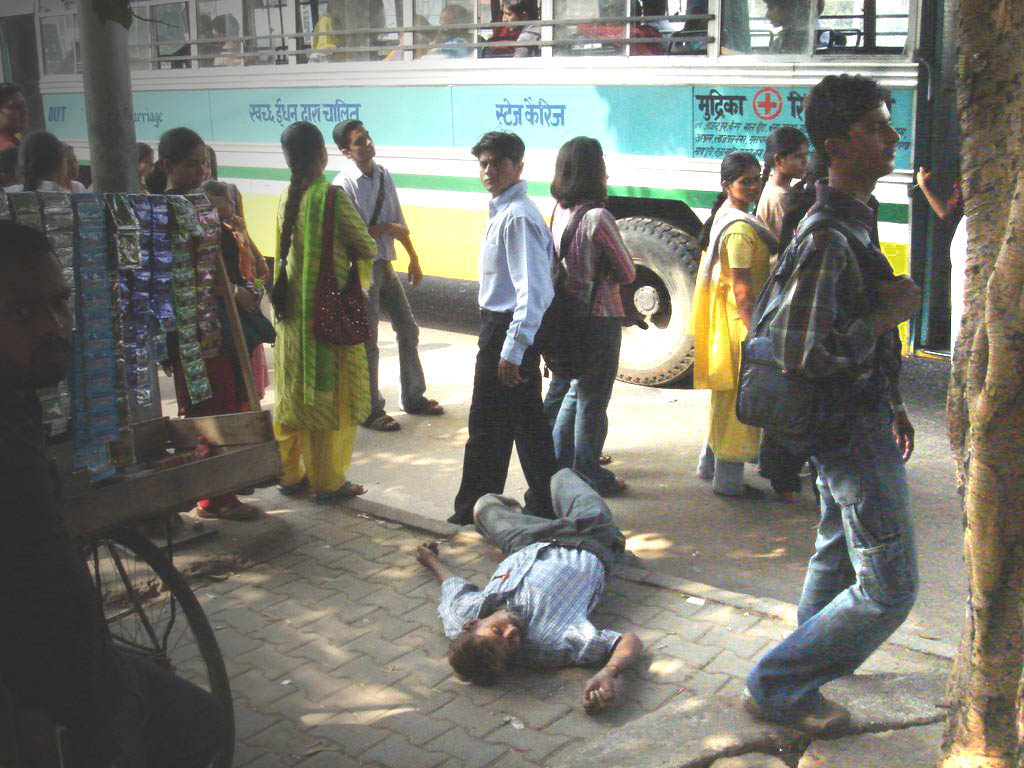 The news from Delhi is bad. On September 2011, a bomb blast killed 12 people outside the Delhi High Court, close to the India Gate monument. The same night the earth roared. The quake measured 4.2 on the richter scale. The next day heavy downpours hit Delhi. For three hours, we got as much rain as the entire month of September does in a normal year. The city was flooded. Is God angry with Delhi?

How to survive in this city?

Since it’s such a trifling question, I won’t bother Allah. Instead, I’ll resort to Chairman Mao, China’s god. Not many people know, but the great leader not just wrote a Little Red Book for Chinese communists, but also had one compiled for Delhiwallas. Here are a few excerpts picked randomly from his speeches, dialogues and collected works.

Every Delhiwalla must grasp the truth, “Political power grows out of the red light of an Ambassador car.”
“Challenges of VIP Movements”, Selected Works, Vol. II, p. 224.

Dare to Struggle and Dare to Win

What is Ring Road? Ring Road is a struggle. There is traffic jam, car smog, killer buses for us to negotiate and overcome. A good comrade is one who is mad to drive where the difficulties are greater.
“Problems of Strategy on the Ashram Flyover”, Selected Works, Vol. I, p. 180.

The Page-3 philosophy of Delhi’s dialectical materialism has one outstanding characteristic: its garment nature. It openly avows that half-naked dialectical materialism is in the service of the exclusive designer proletariat.
“Speech at a Conference of Tailors in the National Institute of Fashion Technology”, Selected Works, Vol. II, p. 78.

There are quite a few people who are class-conscious in their attitude, preferring Vasant Vihar to Vikas Puri, choosing South Delhi addresses for themselves. They feel no warmth towards the people of East Delhi and West Delhi but are cold, indifferent and apathetic. In fact such people are not Delhiwallas, but roasting poodles of the class-driven British colonialism.
“Talk with Tilak Nagar friends”.

In approaching a problem, a Delhiwalla should see the whole as well as the parts. A chick in Khan Market says, “Delhi is no bigger than the size of Choko La restaurant.” That is untrue, for Delhi is not just the size of Choko La. If she had said, “A part of Delhi is this area of Choko La,” that should be true, for it tallies with the facts.
“Where Do Correct Ideas Come from?”, 1st pocket ed., p. 1.

Pleasure-seeking. In the city, there are also quite a few young cadres whose testosterone finds an outlet in places like Lodhi Garden, Nehru Park and Buddha Garden. They always hope to march into these parks with their pleasure comrades. They want to go there not to walk but to enjoy themselves. The last thing they want is to walk.
“The Orientation of the Youth Movement”, Selected Works, Vol. II, pp. 332.

As for the gora expats living in Malcha Marg, Jor Bagh, and Green Park, we should try to co-exist peacefully with them, carry sexual liaisons with them and prevent any possible cultural misunderstanding, but under no circumstances should we harbour any unrealistic notions about them. They always come with a return ticket.
“On Tactics Against Western Imperialism” (December 23, 2005), Selected Works, Vol. 1, p. 45.

The members-only India International Center intellectuals are often exclusive and ancient, impractical in their thinking and irresolute in action. They don’t mind when their great grandchildren – the running dogs of American imperialism – throw themselves heart and soul into the mass bar-coded struggles that takes place daily in Saket’s Select Citywalk mall.
“On Correcting Mistaken Ideas”, Speech given on the 50th anniversary of IIC.

Letting a hundred malls blossom and a hundred old monuments crushed to rubble is the policy for promoting the progress of the arts and a flourishing socialite culture in our Capital.
Speech at Shri Ram Center for Performing Arts, Mandi House.

We are not only good at destroying the old world, we are also not good at building the new.
“The Present Situation and Our Tasks”, Selected Military Writings, 2nd ed., p. 56.

Some people have read a few William Dalrymple books and think themselves quite learned on Delhi, but what they have read is not even 10 per cent of the city. Others are very conceited and having read some Khushwant Singhs and Percival Spears think themselves terrific and are very cocky. A true Delhiwalla is the one who has read no one.
“Oppose Book Worship”, 1st pocket. Ed., p. 2.

There is a social and economic gap between Defence Colony and JJ Colony (slum), but it is no Great Wall, and it can be quickly closed, and the way to close it is to start a revolution, a civil war.
“The Tasks for 2012”