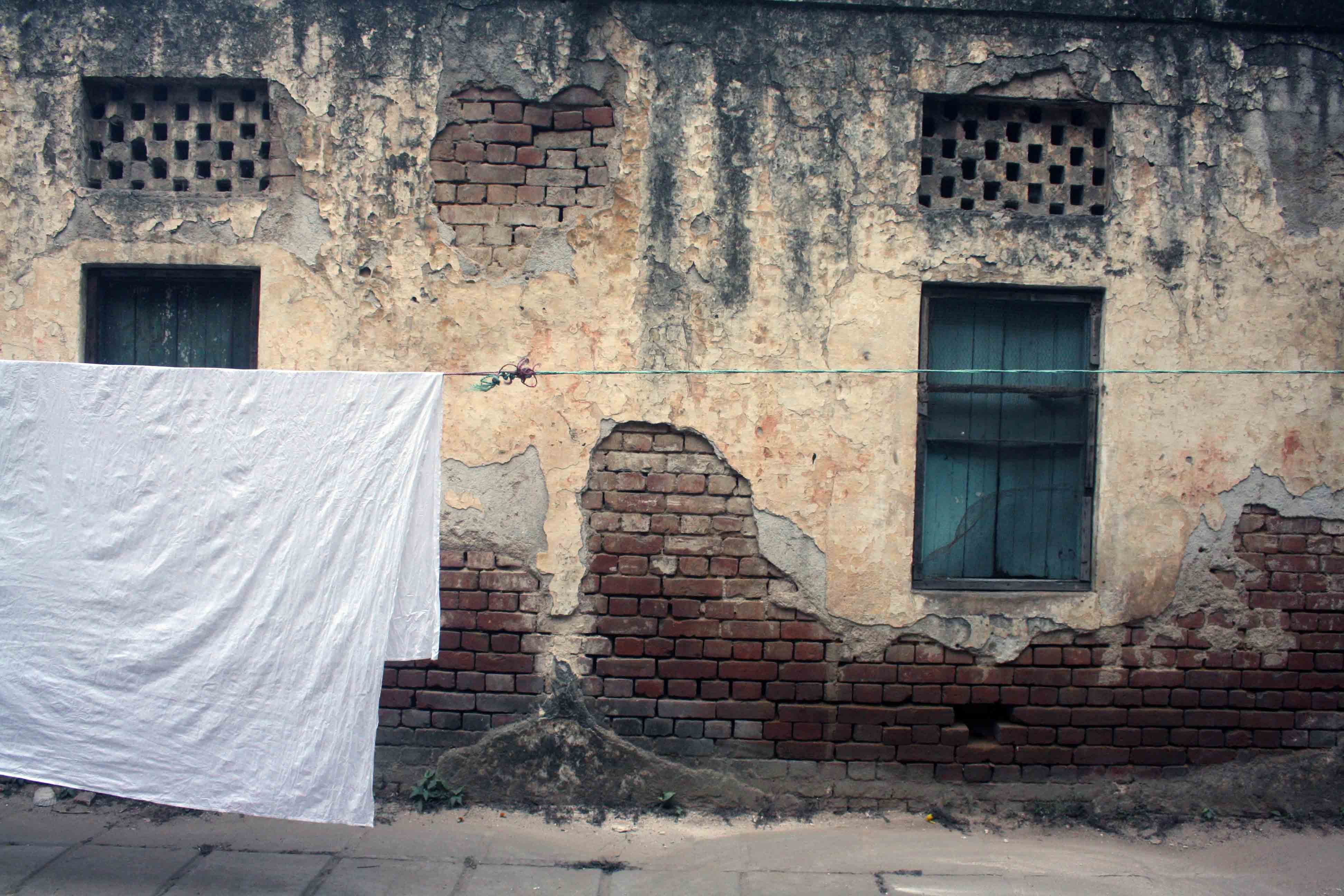 The world of the washermen.

The Oxford dictionary describes a dhobi as “a person whose occupation is washing clothes” and a ghat as “a flight of steps leading down to a river”.

Yet here, the river is four Metro stations away.

Located in the commercial heart of New Delhi, the Devi Prasad Sadan Dhobi Ghat looks up to the high-rises of Connaught Place. Home to a community of 64 dhobis, it is tucked away on quiet Hailey Lane.

“I know what you are thinking,” says Mr Rajinder, a resident dhobi in his 40s who, like most dhobis here, uses only one name. In rolled-up trousers and vest, he says, “This place might appear to be expensive real estate but when we settled here it was nothing more than a graveyard.”

The erstwhile land of the dead comes alive every morning with the sound of clothes being beaten against concrete slabs. The Yamuna is far, so the ghat relies on borewell water, chilamchis (cement tubs), hauds (tanks), naandis (pools) and hydras, electric machines that soak out water.

While all this is shared by the dhobis, each man operates independently, in a neat series of steps.

The clothes are treated first in the chilamchi with detergent, then washed in the haud where the dhobi stands knee-deep in cold water, even in winter. The clothes are left standing in water for half an hour, then taken to the hydra, from where they make their journey to the clothes lines. The ironing is usually done by the women in the family, though one dhobi The Delhi Walla met said he has hired a ‘servant’ for the job. Finally, the clothes go home to their respective addresses, which are spread across Delhi.

“We do hotels and hospitals,” says middle-aged Mr Ram Sagar. “Once a week many of us also take our motorcycles to Vasant Kunj, Greater Kailash and Mehrauli in the south, as well as to Mayur Vihar and Noida in the east. We have many home-owners as regular customers.”

In an age when washing machines have become part of households, why do people still give their clothes to dhobis?

“Every day you shave but you still go to a salon to get a haircut,” says Mr Jaichand, a dhobi watching his clothes being churned in the hydra. “Similarly, most people clean their clothes in washing machines, but for major cleaning, they rely on us.”

The washing duties are over by noon. The narrow drain that runs along the ghat stops flowing and the dhobis return home to a complex of two-room flats across the boundary wall. These apartments are a hop, skip and jump from the British Council, Regal cinema, and Jantar Mantar. Many of us would be ready to pay a fortune to live here.

“The flats are owned by the NDMC (New Delhi Municipal Council). We moved here in 1970,” says Mr Rajinder. “Earlier, we were at the dhobi ghats of Gole Market, Rakab Ganj and Karol Bagh. After they were closed by the government, it kept its promise by giving us alternative accommodation in Hailey Lane.”

Mr Rajinder says that in the 1970s, Hailey Lane was uncrowded. Few ventured into the area. Even today, there are few visitors other than the occasional tourist walking towards Agrasen Ki Baoli, the stepwell nearby.

Pointing to a statue under a neem tree at the ghat’s entrance, Mr Rajinder says, “Nagarsen Baba Ghatwale is our kul devta, the god of the ghats.” The idol has a twirled-up black moustache.

Mr Rajinder says all the dhobis in Hailey Lane are from the Kanaujiya subcaste. They are originally from eastern Uttar Pradesh, their grandfathers settled in Delhi as washermen. “But our children want to do something else,” he says. “My son is pursuing a BA and my daughter is doing MBA. Why will they wash clothes? It’s too much hard work and not much money.”

Delhi still has some dhobi ghats, even in central Delhi, far from the Yamuna. On Deen Dayal Upadhyaya Marg, for instance, you can see rows of clothes lines near Minto Bridge. Commuters on the west-bound Metro train can spot another dhobi ghat seconds before it pulls into the Pragati Maidan station.

In the yard used for drying clothes, a girl in a red top and jeans is arranging the washed linen. Introducing herself as Barkha, she shyly says in English: “I’m just helping my father. I’m a BA student in Mata Sundri College.” Gesticulating with a dismissive flick of the wrist, she motions towards the ghat, saying, “There is no future in this, no future.”