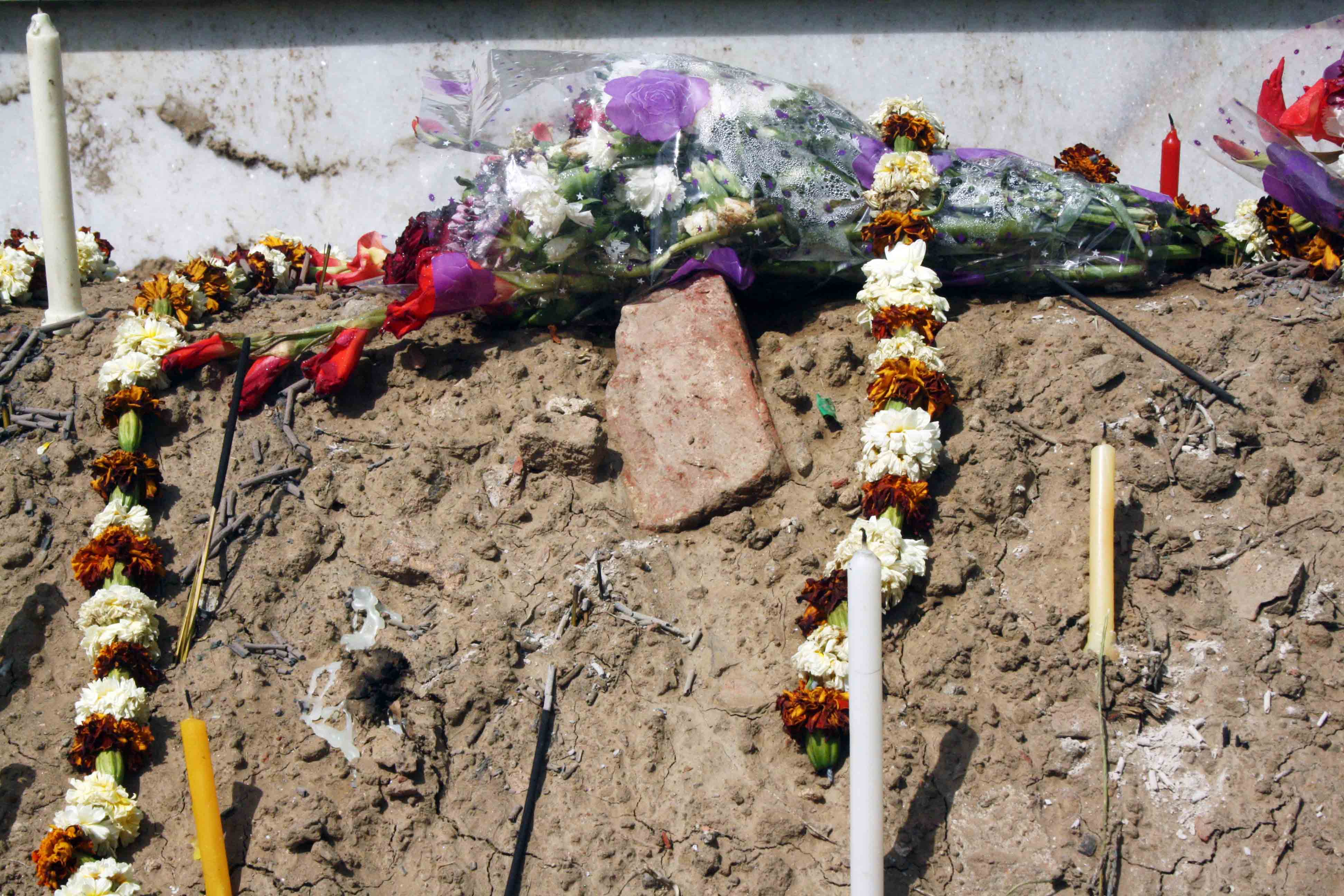 How to find her?

The Delhi Walla is at the Indian Christian Cemetery in Paharganj. I’m looking for Jyoti Mariyam Hora.

A few days ago The Indian Express carried a report about her on an inside page:

For Jharkhand girls, Delhi was to be a fresh start, not the end

Khunti: It could not have been an easy decision for Jyoti Mariyam Hora, 10, to leave Khunti and head for Delhi. Though her best friend, Jayamani Guria, accompanied Jyoti, leaving behind her five siblings and alcoholic father should have wieghed heavily on her mind. Her mother had died when she was a toddler.

They boarded the Swarna Jayanti Express to Delhi on April 11 along with Jayamani’s neighbour, Chandmani, who works as a domestic help in Delhi.

Jyoti died on April 19 at the Madan Mohan Malviya Hospital in Delhi. Two days later Jayamani, 13, collapsed and died at the Ranchi railway station on her way back home. She was accompanied by Chandmani’s daughter, Eden, who too works as domestic help. Both Chandmani and her brother, Sukhram, have been arrested and charged with abduction and trafficking.

Back home, at the school in Pitay Toli, Torpa, the headmaster in-charge, Devanand Ram, is wrecked with guilt. Having seen both Jyoti and Jayamani become thick friends, he believes he should have seen it coming. “Both had become friends over the past month. I was surprised that Jyoti had a close bond with someone senior to her by a year,” he said.

As a testimony to their friendship, Jyoti’s elder brother, Jyotish Hora, a student in the same school, says Jayamani used to walk 6 km from her house in Gutuhatu to their place in Kamra. “Jyoti also used to stay over at her place. Jayamani never talked to any of us in the house,” Jyotish recalled.

Both of them were regular to school. But on April 5, the school found that both the girls were absent for the first time since the present academic session began. Jyoti’s family was clueless about her whereabouts. However, Sevani Hembrom, a teacher from Gutuhatu, said, “It was all over the village that the two girls had gone to Delhi.”

Jyoti’s classmate, Riman Guria, said Jyoti was excited about going to Delhi. “She told this to me at the beginning of the academic year,” she said. According to Anita Guria, Sukhram’s daughter, Jayamani’s mother, Jeyabah Guria, had asked her aunt to take her daughter to Delhi for a job. “At first, my aunt was reluctant. Jayamani asked Jyoti to come along,” said Anita. She said her aunt has been working in Delhi for almost three years.

For Jyoti, the offer was an escape from her dreary existence. Headmaster Devanand said one of Jyoti’s sisters is mentally unstable and cannot attend school. A policeman said, “When we came to know of her death in Delhi, we gave her father Rs 200 as travel assistance. He spent the money drinking.”

Though Jayamani’s mother denied that she told her daughter to go to Delhi, police sources said the parents were reluctant to file a complaint. A police officer said they recovered her body “just before they put the first dirt on her during the burial”.

“Once they reached Delhi, Jyoti lived with Eden in the house where she was working. My aunt tried to find them jobs but failed. Then one day she called to say that Jyoti was ill and the doctors had diagnosed jaundice,” said Anita.

Chandmani panicked when Jyoti died and she asked Eden to return with Jayamani. “I went along with her mother and my father to the Ranchi railway station. She looked fine on arrival. But she became ill even before we left city limits and died before we could get her to a hospital,” claimed Anita.

Khunti police have entrusted a panel of doctors with Jayamani’s autopsy, which while ruling out rape, did not pinpoint the cause of death. The police will now send her viscera to the forensic science laboratory.

The news clip is in my wallet. I take it out. It has a photo of Ms Hora and also of her friend Jayamani. Both are dressed in blue shirt and black ribbon.

I look around the graveyard. A series of crosses are built along a concrete path. Some tombs are covered with dry leaves. One is decorated with plastic roses. A man is praying by a grave.

This morning The Times of India carried an update on Ms Hora:

No burial, so child’s body back in AIIMS

New Delhi: Holding the decomposing body of his 10-year-old daughter, Naveen Horo waited all Friday afternoon at the St Thomas Christian Cemetery in Tughlaqabad, hoping against hope that his daughters body would finally be given a decent burial. But here too he met with disappointment as finding a priest who could agree to perform the funeral according to the tradition of his religious denomination turned into an ordeal.

His daughter, as reported earlier, had died after being lured away from home in Jharkhand, along with a friend, to Delhi.

Finally, a priest agreed to perform the last rites but only on Saturday morning. Since it was already 6pm, the cemetery in-charge asked the child’s father to take away the body and return next morning, said Rishikant from NGO Shakti Vahini. The father was asked to bring Rs 6,000 with him as against the regular charge of Rs 1,500 for the funeral. The staff on duty said this was the charge for cases in which priests who are not officially attached to the cemetery are called for performing the funeral.

Miserable and despairing, the father who spent sleepless nights since the disappearance of his daughter on April 11 only to be told she was dead was forced to retrace his steps to All India Institute of Medical Sciences (AIIMS). The hospital, much to his relief, agreed to keep the body thats wrapped in a white sheet in the mortuary for the night.

A Jharkhand police team and social welfare officials from the state could only watch in shock as the body which had been in the mortuary for over eight days was taken back.

Horo sat in silence, a broken man. The poor daily wager doesnt have enough money to even go back home. On Thursday, after a tiring 26-hour long journey to the capital, he had told TOI that he was determined to take his daughters body back to his village. But after the post-mortem on Friday morning, the condition of the body left him with no choice but to decide on a funeral here in Delhi.

Meanwhile, on learning about the plight of Horo, the Delhi Catholic Archdiocese has stepped in. They will be organizing the funeral at a Paharganj cemetery for the girl. Father Mathew Koyickal from the Archdiocese will guide the funeral ceremony. “We will ensure that the child gets a dignified burial,” Father Arockia Dhas, deputy secretary, Regional Bishops Council of North, told TOI.

Two weeks ago, Horo’s 10-year-old daughter was an eager student at their village in Jharkhands Khunti district. When she disappeared on April 11, along with a friend, Horo, a single parent, moved heaven and earth to find her but never imagined he would not see her alive again.

On Thursday, Horo struggled with his emotions as he spoke about his daughters shocking death.

Horo’s daughter and her friend were trafficked to Delhi for domestic work earlier this month and ended up paying with their lives. Investigations by Delhi and Jharkhand police now hinge on the post-mortem reports to establish the cause of death.

Jharkhand Police have registered a case of kidnapping, trafficking and murder, and two people, Sukhram Gudiya and Eden Gudiya, have been arrested. The main accused, Chandmuni, who allegedly trafficked the girls to Delhi, is likely to be arrested soon. Delhi Police is expected to make more arrests as sources say the trafficking trail is growing longer and indicates a major racket.

I approach a cemetery attendant and ask him: “A child must have been brought here today?”
“Yes, a Jharkhandi girl,” he says. “Go to that cement water tank and turn right. She is in that plot. There will be fresh flowers.”

It is a small kaccha grave (burial charges: Rs 1,000). Yellow, white and red candles are stuck on the mound of loose earth as if it were a Happy Birthday cake.

Ms Hora had come to Delhi to make a new beginning. Today, she has the sky, the earth, the city… everything.

[This is the 72nd portrait of Mission Delhi project]