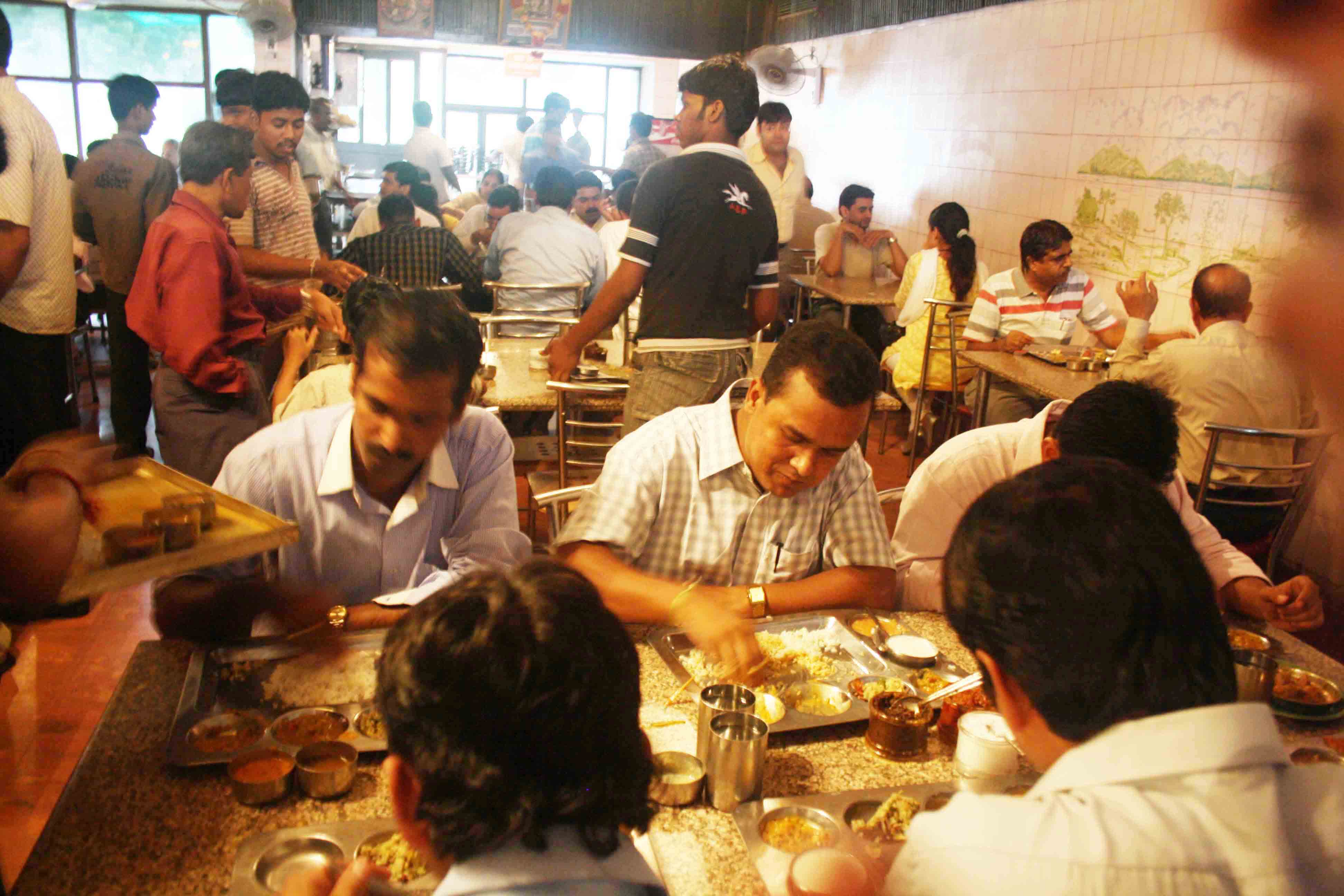 Will they build a wall? Will one side of the canteen serve Seemandhra sambhar and the other, Telangana biryani?

The Andhra Pradesh Bhavan canteen in central Delhi is recommended by Lonely Planet India as a “bargain” where you can get “tasty unlimited South Indian thalis at cheap-as-chips prices”, though categorizing Andhra food as generic south Indian may outrage purists.

“I’m a huge fan of Andhra Bhavan’s canteen,” says novelist and lifestyle magazine editor Nishat Fatima, who moved to Delhi a few years ago from her hometown Hyderabad, Andhra Pradesh’s capital. “The dals remind me of the home food, albeit made by our cook Ramana amma. Her mutton fry is almost the same as the one at Andhra Bhavan.”

In February 2014 Parliament approved the bifurcation of Andhra Pradesh, which was formed in 1956 to unite the Telugu speakers of southern India. This seemingly concludes the 60-year-old struggle of the people of Telangana to have their own state. The Rayalaseema and coastal Andhra areas will constitute Seemandhra. And the state of Andhra Pradesh will cease to exist.

Every Indian state is represented in the Capital by its Bhavan (or House). Each has a subsidized canteen serving the cuisine of the region. Run by the private Sai Caterers, the canteen in Andhra Bhavan is not only open to the public, but is also extremely popular.

Will it now become the Seemandhra canteen (according to a staffer, most of the waiters and cooks hail from coastal Andhra)?

The question over the future ownership of the canteen first surfaced in July 2013 when the Indian government decided to create Telangana, the country’s 29th state. The city’s newspapers had then issued eating-as-usual reports from the canteen, with atmospheric details about the crowd, the waiters, the high ceilings, and the delicious appadams and achars.

With the impending demise of Andhra Pradesh an unavoidable reality, The Delhi Walla finds himself inside the canteen. A senior employee at the canteen is so nervous that he will talk to me only “after the dust has settled down”. In the pungent-smelling air of the canteen’s store, he says: “Our state is undergoing a crisis and I’m just trying to do my job. Please have our meal but don’t ask about Telangana.”

“Soon, this will be our canteen,” says M. Srinivas, my neighbour at the canteen’s communal table. A young cameraman from Hyderabad-based Sakshi TV, he is in Delhi to cover the rapidly unfolding events. Pointing at the bowl of rasam, Mr Srinivas says: “The real Telugu food is from my Telangana. This is Seemandhra food.”

An outsider may find it tough to discern the differences between the two cuisines. “The traditional Telangana food relies on grains such as millet and sorghum, and is drier than Seemandhra food, which tends towards wet dishes,” says Charmaine O’Brien, author of the newly released The Penguin Food Guide to India. She says on email, “The cuisine of Telangana has more Indo-Muslim influence (dry, rich spices, firmer texture) and Seemandhra is more ‘south Indian’ (wet, soft, rice, tangy).” Ms O’Brien, based in Melbourne, Australia, warmly recommended the eatery in her earlier book Flavours of Delhi: A Food Lover’s Guide.

What makes the canteen so special is the fact that it is one of the few places in Delhi to offer a taste of Andhra. The Gunpowder restaurant in Hauz Khas Village did serve a few specialities such as beerakaya palu, sorakaya pappu and everyone’s beloved sweet and sour pumpkin, but it shut down in 2013. The restaurant’s co-founder, Kiranmayi Bhushi, a social anthropologist who claims links to both Seemandhra and Telangana, says, “There are no sharp differences in the cuisines of these two regions, but I expect that the people of the new state will affirm their identity by resurrecting forgotten dishes, which they will proudly wear on their sleeve and proclaim, ‘This is Telangana’s food.’”

A strong dissent on the quality of the Andhra Bhavan canteen is, however, put on record by Pushpesh Pant, the author of India: The Cookbook. He is an encyclopaedia on Delhi’s little-known eateries specializing in regional cuisines. “Andhra Bhavan’s canteen is overrated,” Mr Pant says of a place where it is rare to immediately get a seat during lunch hour. “The dishes are not representational of what we know as Andhra Pradesh, which has its culinary map divided into Hyderabad, the coastal area, the region merging into Orissa, the region merging into Maharashtra….”

To this hard-to-please gourmand, the canteen’s fabled chicken biryani is “nothing but an apology of a biryani”. If this is our taste, he tells us, we could as well hog on the “frying pan biryani served in the despicable basement shacks of Mohan Singh Place” in Connaught Place. “I’d rather give a higher rating to the canteen at Punjab Bhavan where they dish out a good Punjabi meal. The pork delicacies of Sikkim Bhavan, too, are a delight,” says Mr Pant, adding, “Andhra canteen is successful because of its location.”

Within walking distance of India Gate, Andhra Bhavan is a less than 10-minute drive from the commercial district of Connaught Place. Spread over 4 acres, the land once belonged to the nizam of Hyderabad and was acquired by the Union government, which gave it to the Andhra Pradesh government.

The Prime Minister’s cabinet note on the state’s bifurcation has no word on the Bhavan.

No unrest was reported from Delhi’s epicureans in 2000 when the eastern state of Bihar was bifurcated to create Jharkhand. But then the canteen at Bihar Bhavan serves regular north Indian curries and traditional food such as litti and chokha are available only when ordered in advance.

While the Andhra canteen remains as busy as before, stepping into the lobby of the Bhavan makes for a poignant experience. A detailed irrigation map of (unified) Andhra Pradesh faces the giant panoramas of the state’s touristy destinations — the scenic backwaters and great temple towns. These installations by Andhra Pradesh’s tourism department will soon be reduced to memorabilia.

A little shrine to Lord Venkateswara is built on one side of the lobby. The white-robed priest hopes that the Bhavan will remain with Seemandhra, requiring Telangana to erect its own elsewhere.

The outdoor passage that connects the lobby to the canteen has an outlet of the Andhra Pradesh–run Apco, or weavers’ cooperative society, handloom store.

“Perhaps it will be divided into two parts,” says the shop-in-charge Padam Bahadur, who insists he is only half-joking. His shelves are stocked with handwoven Khadi kurtas from Hyderabad. The city is going to Telangana, though it will be the joint capital for a decade. “The Seemandhra section of the shop will have cotton saris from Vijayawada and Rajahmundry,” says Mr Bahadur. Talking of the canteen, he says: “I will continue eating there. Being a native of Nepal, I like the food of both the places equally. They are almost alike.”

Beside the canteen’s revolving iron gate stands a stone statue of Tanguturi Prakasam, the first chief minister of Andhra State, a precursor to Andhra Pradesh. It was inaugurated in 1992 by P.V. Narasimha Rao, the first and only prime minister from Andhra Pradesh. Mr Prakasam’s head is tilted slightly upwards as if he is looking towards a distant vision.

If only he knew.