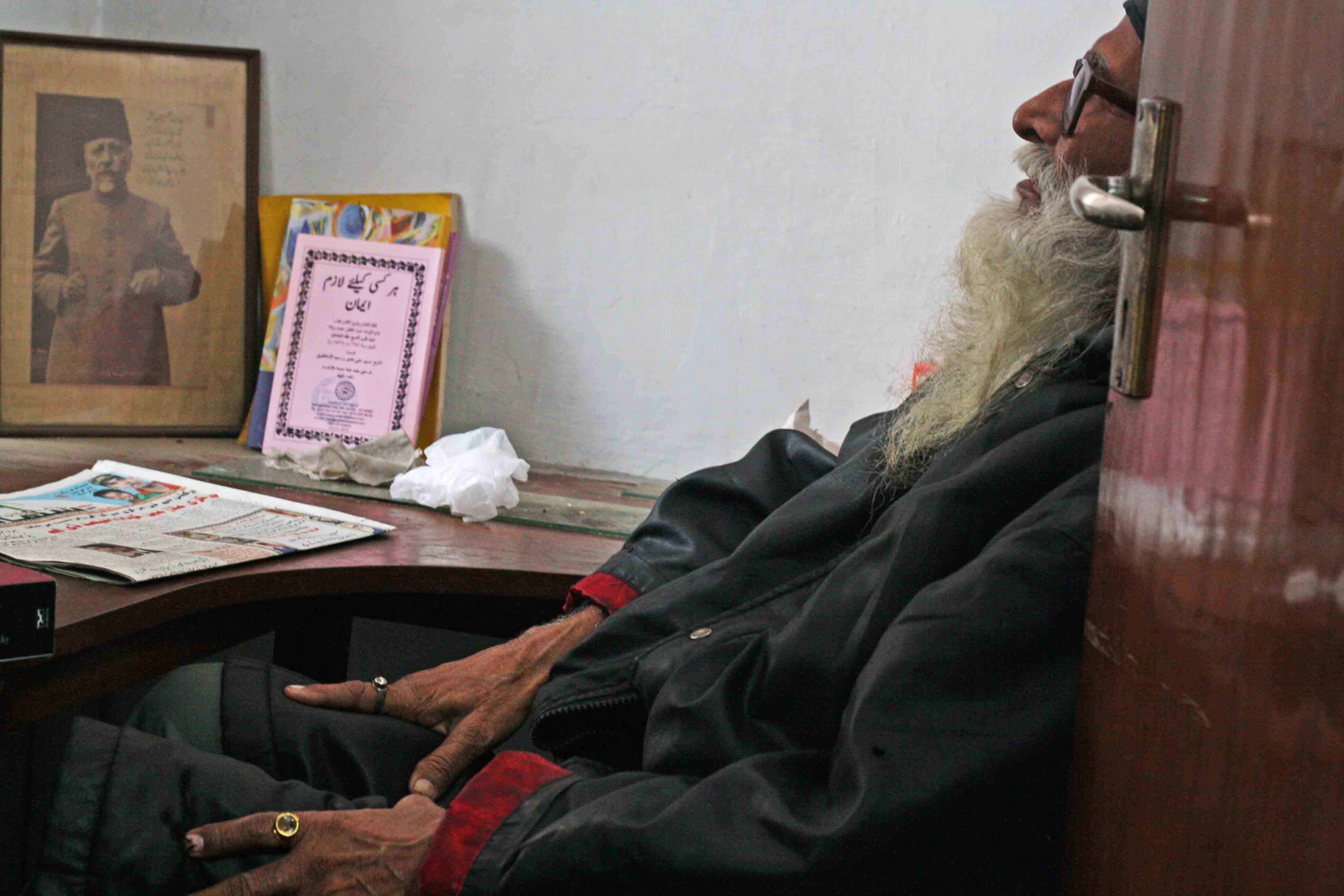 It is not very often that one comes across an unheard of but unusually extraordinary person — even in a city like Delhi that is teeming with interesting people.

One morning The Delhi Walla met an elderly homeless man who spends his entire day reading in a public library.

In his late 70s, the frail Muhammed Waseem has a long white beard and a mind shelved with books. Six days a week, Monday to Saturday, he can be found in the library of the Ghalib Academy in central Delhi’s Hazrat Nizamuddin Basti. Dedicated to the life and work of the 18th century poet Mirza Ghalib, the centre has an auditorium, a museum and a library with thousands of books and journals in Urdu. Anybody can go there and sit for hours in the company of novels and newspapers.

Mr Waseem can always be found in one of the three cubicles built at one end of the library. The windows there look out on Ghalib’s tomb.

Sitting on a wooden chair, he tells me in his soft warm voice: “I have been coming to this library for 10 years. At night I sleep in the rain basera (government-run night shelter), which is set up at one end of the Basti. During the day I come here to read. In the evening after the library closes its door, I go back to sleep in my shelter. I have my own clean blanket and bed sheet.”

Almost all the space in the cubicle is taken over by a wooden table on which rests a black and white framed portrait of freedom fighter Maulana Abul Kalam Azad. I also spot a bottle of homoeopathic medicine labelled “Haemophos Iron Tonic”. The Urdu newspaper Roznama Rashtriya Sahara is lying opened on Mr Waseem’s lap. He says, “I read all newspapers, including the English editions of The Times of India and Hindustan Times. I used to read books too but now my eyes… I can no longer see words clearly. I haven’t been able to read a novel for years. In newspapers, I only manage to read the headlines which, thankfully, are printed in bold.”

Mr Waseem’s daily life appears to be a book lover’s fantasy — it’s all about reading for pleasure, with no space for anything else, not even for a day job. After getting up in the morning — just in time for the night shelter to shut down for the day — he first stops by an eatery to have a glass of milk and one fen, Delhi’s classic teatime snack. He then crosses the road to go to Khan-i-Khana’s tomb in Nizamuddin East, where he lounges on the grass for an hour or so. By 10am, when the Ghalib Academy opens, he walks back to Nizamuddin Basti and remains there till the evening.

But where does the money for his milk and fen come from?

“I sometimes stand in the alley that goes towards the dargah,” he says, referring to the Sufi shrine of Hazrat Nizamuddin Auliya, which gave its name to this 14th century village. “Pilgrims give me food, clothes and sometimes, money.” Most night shelters operate only in winter; it’s not clear how Mr Waseem copes in summers.

Going back to his early days, Mr Waseem says: “I retired about a decade ago after which I decided to spend the rest of my life reading. I had been working as a furniture polisher and an all-round painter in Bombay, where I lived for 30 years. Do you know that I have also seen Dubai? But Delhi was the first big city I lived in after leaving my hometown Kanpur (in Uttar Pradesh) many, many years ago. I must have been 20 then. I’m sure my brothers and their families must still be living there but I haven’t had any contact with them for a very long time. I like living alone. I have also not married. I have never had any romantic relationship with anyone… Sometimes I think I could have experienced at least one relationship but I think I’m a traveller who is unable to set roots anywhere.”

Before his eyesight dimmed “a few years ago”, Mr Waseem would reread his favourite novelists Premchand, Krishan Chander, Khwaja Ahmad Abbas and Diptee Nazir Ahmad Dehlvi. “These writers had a style that brought me closer to the realities of our world,” he says. “Premchand’s stories especially showed us the truths of life.”

A few hours later, it will again be evening. The library will close and Mr Waseem will return to the night shelter. Noting the predictability of the day, he says: “I have no pain, no suitcases and no burdens. My end depends on the will of God. Until then I will continue to sit in this library.”

[This is the 83rd portrait of Mission Delhi project]