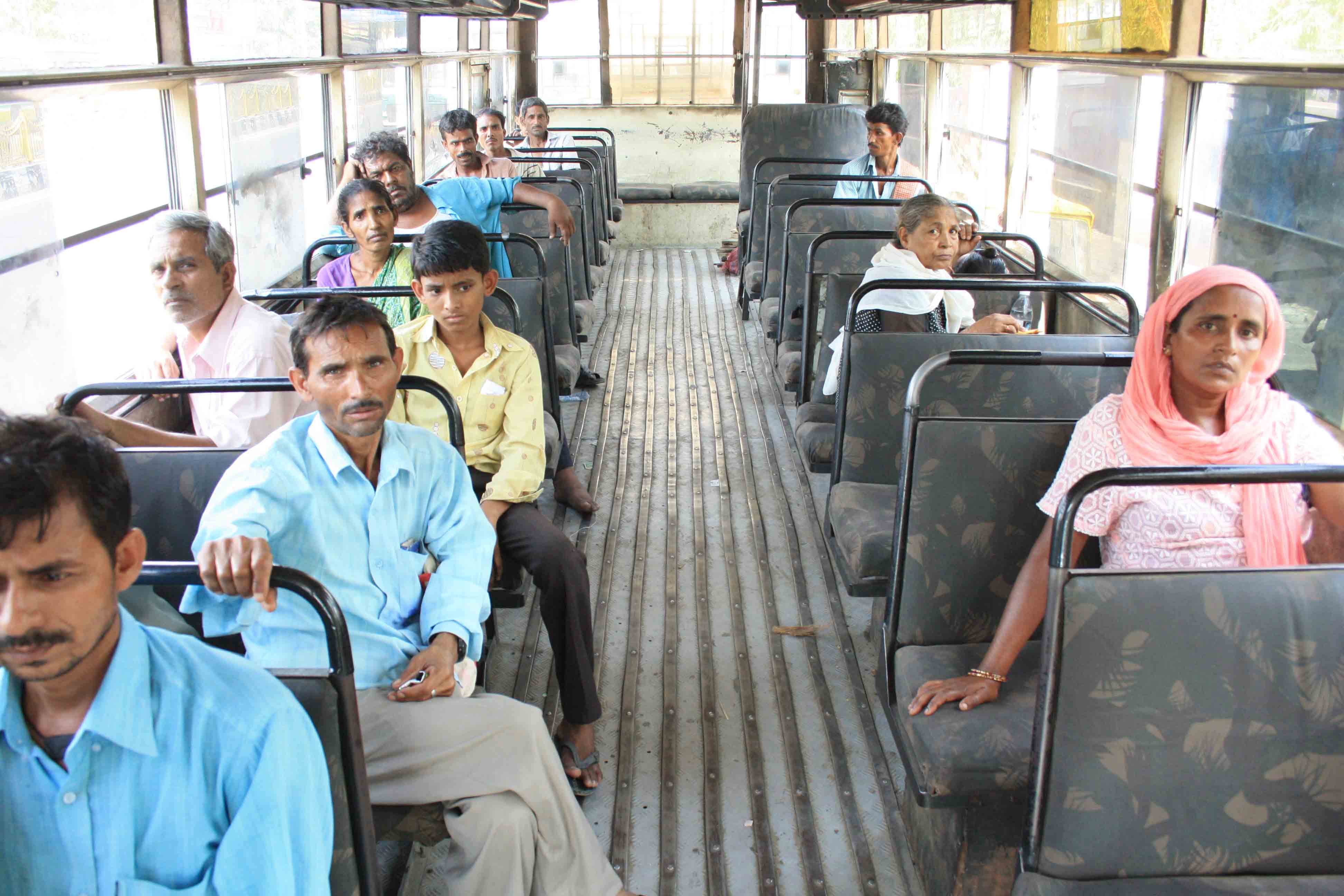 It takes almost the same time that it takes to fly from Delhi to Helsinki, Finland. And the ticket costs a mere 15 rupees. One rush-hour evening The Delhi Walla dared to travel on the Outer, or Bahri, Mudrika Seva of the Delhi Transport Corporation (DTC). At 105km, the city’s longest bus route is a progeny of the legendary Mudrika Seva, which marked its 40th anniversary in 2014.

“The Mudrika was our lifeline,” says Bangalore-based historian Ramachandra Guha who was a hosteller in north Delhi’s St Stephen’s College in the late 1970s. Talking on the phone, he says, “I took that bus route each time I had to go to south Delhi to attend a festival at the IIT (Indian Institute of Technology) or visit my local guardians in Panchsheel Park, or meet my friend in Hauz Khas. Once, a few days after an inter-college cricket match, in which I had played, I got into a Mudrika bus at Mall Road. A boy stood staring at me with a mocking smile. As I was getting off at AIIMS, he finally said: ‘You ran around under the sun for five days and took a single wicket!’”

Since we are talking of a bus route that encircles the city, Mudrika memorabilia is scattered across Delhi and outside it — one multiple-choice question in exam guidebook Quantitative Ability asks: “The New Delhi Mudrika Bus Service runs on a circular road having a total of 10 stops…. In how many ways can the driver select his stops if he decides to stop at only three stops?”

Incidentally, there’s nothing official about at least one Mudrika. The grounds of Jawaharlal Nehru University boast an in-house Mudrika — a popular nickname for the notoriously unreliable bus 666, which shuttles from Purvanchal Hostel to a short trip outside the campus and back.

I boarded a packed Outer Mudrika bus from south Delhi’s smoggy square of Dhaula Kuan. It had begun its journey an hour earlier, from Uttam Nagar, the west Delhi neighbourhood that is home to Chin refugees from Myanmar. The elderly conductor warned me beforehand that it would take 56 stops and 6 hours to complete the tour.

Most passengers in the green low-floor bus were travelling short distances. At Moti Bagh, the slow-moving bus was raided by college girls of Delhi University’s South Campus. At Kalkaji Mandir, teenage boys rushed in shouting cusswords. The stop near Nehru Place brought in a wave of homeward-bound office-goers. With no elbow room left, one man stood with his eyes closed, as if he was fast asleep.

According to a feature in an old issue of the UK-based New Scientist journal, the origins of the Mudrika service are traced to a government report drafted in 1973, when Delhi had 69 bus routes, compared to the 583 today. Arguing for a radical reorganization of the routes, the report, A Systems Approach to the DTC Bus Problem, called for a focus on direction instead of destination. The positive response it got led to the creation, in May 1974, of the service of Mudrika — Hindi for “ring” — on the Ring Road, the traffic diversion highway built in the 1960s as part of the first master plan for Delhi. Soon buses were darting in both directions on the 50km motorway at 10-minute intervals, connecting all the outlying localities of this egg-shaped metropolis.

Efficient inter-city connectivity is, however, not the only outcome of mass transit systems. Our daily commutes often shape our transformative experiences. At Delhi University’s North Campus, the principal events in a student’s life are probably centered around the Vishwavidyalaya Metro station. That used to be the Mudrika’s privilege. “When it began, the Mudrika was the Metro of our times, a magical ring service that circled Delhi in new wide-bodied buses with high frequency,” says Bombay-based TV producer Siddhartha Basu, a St Stephen’s alumnus who met his future wife, Anita Kaul, at a neighbouring college. “After I left the university, it was the Mudrika that ferried me from Defence Colony to the back gate of Miranda House college, where Anita was, in one easy hour.”

Not all recollections of the Mudrika make for lovable reminiscences. Sharing her outrage at the rape and murder of a physiotherapy student on a moving bus in south Delhi in December 2012, film-maker Nilita Vachani wrote on the Kafila.org website: “As university students in the late 1970s, early 1980s, we were routinely pawed on Delhi buses. I’ll never forget the evening my closest friend threw herself off a speeding Mudrika because a dozen men had attacked her at the back of the bus, watched by the ticket collector who took his turn.”

The Outer Mudrika route was launched the same year the first stretch of the Delhi Metro was inaugurated — in 2002. Today, 106 buses run on this circular corridor, which follows the Outer Ring Road, but frequently disappears into serpentine turnings as if enjoying the perverse pleasure of taking the longest and the most crowded way to the destination.

The Khanpur-Devli Road was particularly torturous. The view from the window seat consisted of a series of cramped groceries, sandy parks and misshapen residential blocks. I yearned for 620, Delhi’s most scenic bus route. Originating from Shivaji Stadium in Connaught Place, the bus circumambulates the entire Colonial-era district, goes past Jantar Mantar, India Gate maidan, and Teen Murti Bhavan Museum, before entering the leafy Shanti Path.

At 6.30pm, as we neared the Okhla vegetable market, the driver turned on the headlights. In 2005, not far from here, a bus driver on this same route opened an unclaimed bag lying under a seat and discovered a bomb that he immediately threw out, saving the lives of 50 passengers; he however, lost his sight.

I dozed off by the time the bus reached Ashram, and woke up when it suddenly gained speed on Hazrat Nizamuddin Bridge over the Yamuna. We were entering the eastern part of the city.

At the congested Laxmi Nagar, teeming with coaching centres for civil services aspirants, a suited man stepped on with a black leather bag and Elizabeth Gilbert’s Eat, Pray, Love.

At Anand Vihar, a Metro train crossed over us on an elevated track. One day this rapidly expanding rail network will kill the Mudrika, though we are still far from that climax. In 2013 the Metro reached its highest daily ridership figure of over 2.5 million; the DTC, according to official figures, carries double that number every day.

The final stretch of my Mudrika expedition passed through areas having names I had only encountered during the TV coverage of Delhi assembly elections. Veiled in shadow, Burari Chowk and Peera Garhi looked impenetrable.

At 10.15pm, our bus arrived at Uttam Nagar. An hour later, another Mudrika bus would begin the same journey.

Fellowship of the ring