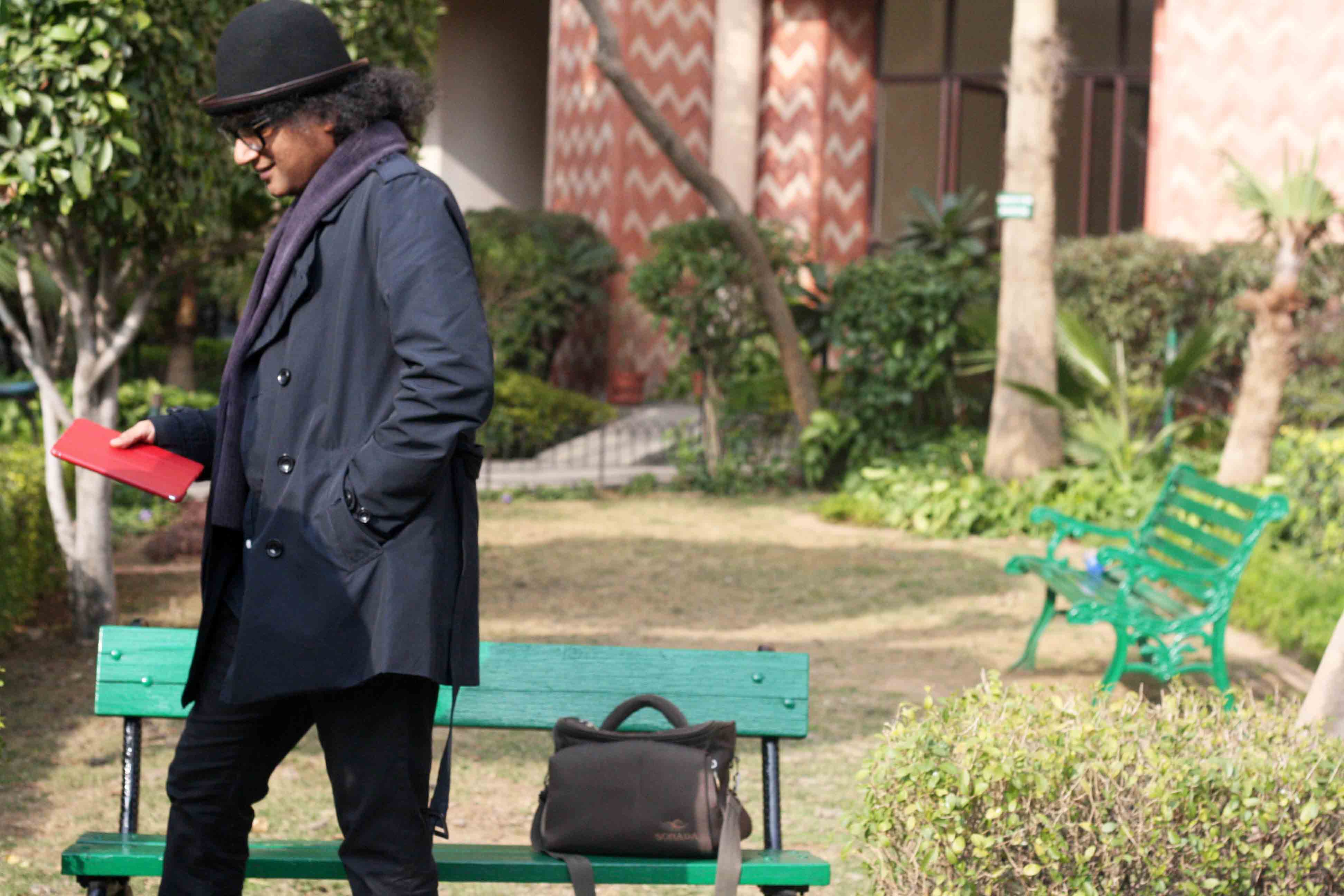 As the chief editor of The Indian Express, Raj Kamal Jha spends his day at the newspaper’s office on Bahadur Shah Zafar Marg in central Delhi. He gets home only by midnight. Despite his exhausting schedule, the 48-year-old journalist is ready with his fourth novel, She Will Build Him A City.

This novel shows a surreal, and frightening, side of Delhi. Mr Jha spares no effort in making the city feel as dangerous as it does every morning in our newspapers — including, for instance, a gruesome gang-rape.

The author of such a dark novel must make for fearful company. But the long-haired Mr Jha is quite the opposite. He laughed a lot while chatting in his drawing room, though he took time to agree to being photographed. He said he didn’t want the world to see his home. Finally, Mr Jha, who lives with his wife and son, agreed to pose for The Delhi Walla on his terrace and on a park bench outside his apartment.

Mr Jha lives in Gurgaon, a part of the NCR (National Capital Region) that he vividly describes in his novel as the New City. His ninth-floor apartment is within walking distance of two gigantic malls and a Metro station. If you want to say hello to Mr Jha, just board the Yellow Line Metro after 10.30 am — he is a regular. Excerpts from an interview:

There’s a woman in your novel called Priscilla Thomas, “the country’s most famous TV anchor”. She is clearly a parody on Barkha Dutt.

You are saying that.

You are smiling sheepishly.

Don’t give sheep a bad name (laughs)… Miss Thomas is the quintessential celebrity journalist of our times — more a story than a storyteller. We journalists are not the stories…the most interesting stories are usually far away from the newsroom and the TV studio.

The Delhi of your novel is a city of horrors.

For certain men and women in the novel, those with heads full of despair. If thoughts could form coloured bubbles over the head, dark for bad, bright for good, and if I am looking down at the city from the sky above, I am drawn to the big, black smudges.

The Metro is a character in your novel.

Very much. A character sees it as a glowing pill inside the stomach of a sick city. Like the barium trace in an X-ray for ulcers. I use the Metro to go to work and to return home. Every passenger is a different Delhi, a different NCR. It is wonderful to be in a coach reading a book knowing there are all these people around you, each one carrying hundreds of stories inside their heads.

Even the Metro is menacing in your novel.

I am not so sure about that. But, yes, the Metro in the novel not only provides a space for a pair of lovers on their way to a hospital, it is also full of the despair I mentioned. Thousands come to the city to build a new life each day. What if they do not make it? What will happen to all these hopes and aspirations and dreams? What will fill the head when these are gone? That’s a brutal part of Delhi, of any city.

When did you arrive in Delhi?

End of 1994, when I moved from The Statesman in Calcutta to the India Today magazine. My first home was in Gulmohar Park. India Today was generous with its HRA (house rent allowance).

Have you travelled in a Blueline bus?

No. I didn’t have to when I moved to Delhi.

Then you don’t know hardship.

I was a college teacher’s son growing up in Calcutta in the 1970s. The first refrigerator arrived when I had left home and was at IIT (Indian Institute of Technology). But that wasn’t hardship. Much more than any scarcity, what defined me were the books at home and the inability to sleep early, a condition that lasts to this day. Now, of course, I can stay awake in my apartment as late as I wish to but it’s quite another matter when you are in a small flat shared by six people. Lights would be turned off at 10-11pm, after which I would go to the bathroom, switch on the light, and sit there…

…with a dirty novel?

There were no dirty novels then. I would see dogs that flew and cockroaches that fell in love and other such beautiful things that only happen in those mystical hours.

And then, in 1984, I got into IIT, Kharagpur. C 231, Azad Hall was the most luxurious place in the world. Because it was my own room. No roommate. It had a single iron cot, and a window with bars. I had the freedom not to turn off the lights at night. I wrote my first story in that room…for our campus magazine. I think it was about a dog which looks into a rain-filled puddle and then steps into it to realize that it’s a bottomless well. IIT was the place which helped me decide I didn’t want to do engineering, I wanted to hear people tell stories and I wanted to tell some as well.

You wrote your new novel in Europe.

In Berlin. The Indian Express was generous to let me run away to an year-long sabbatical, a wonderful bubble in which I locked myself up. They said no strings attached, nothing to report, nothing to discuss or share, just spend a year in this city. This was the first time I was living in Europe and I realized — on a daily basis — how history and the future live so close to each other and in such harmony. You see it wherever you go, in the architecture, in literature, even in the streets. Across the city, you see stolpersteine, plaques of Jewish homeowners who were sent to concentration camps. The stolperstein on the street right across my apartment was of a certain Max Schneid. I saw his plaque all the time, day and night. He was sent to Auschwitz-Buchenwald, he died in 1944. He is one of the people I have dedicated my novel to.

Tell me more about Berlin.

It became my second home, if there is something called a second home. It’s like my canvas, my paintbrush and all the colours are in India and when the time comes to paint, I needed a studio. That was the beautiful Staatsbibliothek, the state library in Berlin, where even the sunlight fell at the right angle for me to dip the right colour of paint…I hope.

I discovered my father’s book in that library — he is a linguist in Sanskrit and French. His book was on Magadhi language and its formation. This was the first time I got to read as much as I could of the book. It made its way into my novel as well.

You are a writer who makes his living as a newspaper editor. That must be soul-killing.

I will die as a writer if I don’t live in the newsroom. What moves me the most as a writer are the fault lines where worlds intersect—man, wife; husband, son; day, night; city, village; silence, noise; fear, hope—what lies in the spaces between these lines. Every morning meeting in The Indian Express is about this, this flood of stories. By the time I leave, I am story-saturated. A scene in my novel originated after one such day. The night’s last Metro had left. I was returning home in a cab. There was no one in the India Gate circle save for a roadside vendor. He had only a single red balloon left on his cart, the balloon that does wonderful things in the book.

Did the fact that you’re a Brahmin play any role in your writing life?

No one’s ever asked me this before. I am not so sure how to answer this. What I know for sure, though, is that my father walked barefoot to his village school in north Bihar, his father was a poor teacher. My father went to college. In the 1950s, he left Bhagalpur, where he had a job as a Sanskrit professor, and boarded a ship from Mumbai that took him to Paris and Sorbonne, where he did his doctorate. An amazing leap of faith in himself. He returned and settled in Kolkata, where I went to school, where I was introduced to imagination. I doubt he could have done all that, I doubt we would be having this conversation today, if my father was a Dalit.