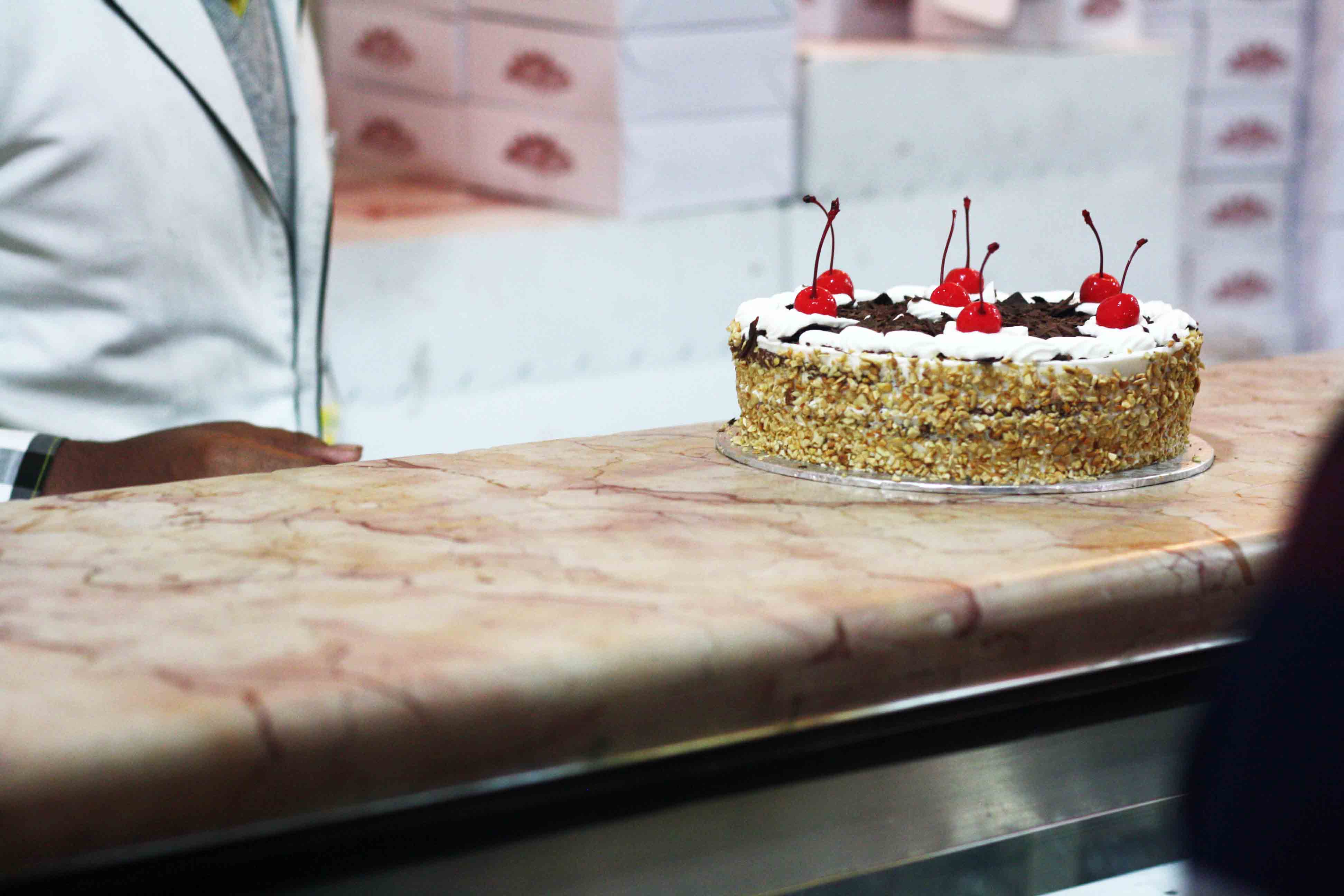 The most beautiful place in Delhi is not Humayun’s Tomb but Wenger’s.

The landmark bakery in Connaught Place’s whitewashed A block appears crowded in all seasons, at all times. There’s always a horde of confused-but-hopeful-looking people darting glances at the display shelves. The queue at the cash counter is always long. As you wait for your turn, the thick wooden door of the inner chamber swings open, and uniformed staff emerge carrying trays of pastries, patties, cookies and chocolates to replenish the shelves.

The steady ship in this stormy sea is the frail turbaned man standing beside the door. The calm Sikh gentleman can often be seen chatting in a low voice with customers whose body language suggests that Wenger’s is their second home.

Charanjeet Singh, the manager, is completing 50 years at the bakery. He joined Wenger’s when it served only four types of pastries and three types of bread. “No, I will not talk about myself,” says the 70-year-old politely as if he is offering the celebrated pineapple pastry for free.

Mr Singh opens up over several visits. So does Atul Tandon, a senior member of the very private family whose deceased patriarch acquired Wenger’s from its Swiss founders, Mrs and Mr Wenger.

These two men personify a Delhi institution that has been memorialized by several chroniclers, including the late Khushwant Singh and Ruskin Bond. The fame is not merely bookish. People from all over the National Capital Region travel to central Delhi to order customized cakes at the shop.

“I like it that there’s just one Wenger’s and that there’s strict quality control,” says Ghaziabad’s Jayati Mukherjee, who is selecting a cake for her husband’s birthday. “They haven’t mushroomed all over the city, trying to be everything to everyone, selling dodgy food through franchises.”

In 2012, Wenger’s did try something new — it opened a deli adjacent to the main pastry shop. That forlorn-looking joint has been the only expansion in four decades.

As one of the few functioning original establishments in Connaught Place, Wenger’s could be a subject of academic interest to scholars of New Delhi’s history. Some loyalists may have already dug out the fact that Wenger’s started as a catering outfit in 1924 and became a confectionery two years later when it opened in the Exchange Store Building in Civil Lines. It moved to its present address in the late 1920s and expanded operations with three restaurants, Rendezvous, La Mer and Green Room, which hosted balls and dinners, on the floor above the shop. They shut down in the 1970s, making way for a bank.

But can anybody imagine anyone coming to Wenger’s to buy jalebis?

Till now, even Google didn’t know that Wenger’s once also served sweets like rasgulla, gulab jamun and raajbhog. “During the 1960s, we had all the mithais you find in a Bikaneri sweet shop,” says Mr Singh.

Mr Tandon, who is in his early 50s, faintly remembers the brief era when traditional Indian sweets were sold at Wenger’s. “While cakes were made in the bakery behind the shop,” he says, “the mithais had a separate factory in a building next to our former home.”

The Tandon family, which lives in New Delhi’s Greater Kailash-I and Sunder Nagar, used to be Old Delhi residents, with a house in Daryaganj. It is an accident of circumstance that they ended up with a European-style patisserie. The Chandni Chowk-born Brij Mohan Tandon had the good fortune of being a general manager at Wenger’s, where he built an excellent relationship with its childless owners, who sold their property to him in 1944.

“Mrs Wenger treated our family like hers,” says Mr Tandon, showing a photograph of his grandfather Brij Mohan and his wife Chameli Devi with the Wengers in Zurich, Switzerland (he declined to share it on The Delhi Walla for reasons of privacy).

It is also an accident of circumstance that a young man from Ludhiana in Punjab who didn’t know what a cream cake tasted like ended up being the manager of the Capital’s oldest surviving cake shop. Mr Singh, who had done a diploma in refrigeration, was hired as a resident engineer in March 1965 to look after Wenger’s newly imported air-conditioning plant. “While the machines ran smoothly, Sardarji helped in our restaurants with billing and other desk jobs,” says Mr Tandon. “After we shut down the restaurants, he moved down to the confectionery. He retired on turning 58, but still comes daily.”

Mr Singh, who commutes from his west Delhi home on the Blue Line Metro, says, “The shop feels like home.”

Unlike other notable bakeries (Maxim’s in Kailash Colony, Angels in My Kitchen outlets, for instance), Wenger’s comforting familiarity and goodness are more than the sum of its products. A part of the secret could well be its many elderly employees, who give the place its enduring stateliness. Many staffers have retired but, like Mr Singh, continue to work — obviously with fewer duties and lower salaries.

A true Wenger’s aficionado should ideally be able to recite not only the names of all the 70 varieties of pastries, 25 varieties of bread and 22 varieties of chocolates there, but also of the old-time staffers. There is assistant manager Ashok Gupta, salesman Randheer Sharma, the peon Gambux, the confectioner Daya Kishan, and the “English cook” Udai Singh, who died years ago but is still fondly remembered.

One of Mr Tandon’s most prized possessions is a Swiss registration card that bears the name Jeanne Sterchi. This was the maiden name of Mrs Wenger, who started the bakery with her first husband and continued running it with her second husband. After selling the property, she retired to Dehradun. She died in 1974 and was buried there. The new owner, Brij Mohan Tandon, died a year later in a car crash. He was driving with his wife to their Dehradun house which, as it happened, was purchased from Mrs Wenger.

Since then, Brij Mohan’s inheritors have travelled through many countries and browsed through many cookbooks in search of new delights to be showcased at Wenger’s. Some items, like the German rye bread, found few takers while others, like the macarons introduced three years ago, are a hit. It is, however, the old favourites like the black forest pastry, says Mr Tandon, that remain the best-sellers.

Today the bakery is being handed over to a new generation. Mr Tandon’s 25-year-old daughter is gearing up to be the new active partner in the family firm. Being a Cordon Bleu chef, Anania should help provide a much-needed contemporary vitality to this time capsule. She should also cut down on the grease in the mutton patties; and somebody please tell her that the cold coffee has a machine taste, and the sandwiches look unappetizing in their transparent plastic packaging.

But the young woman’s inventive experiments must not eliminate old-timers like the always dependable pineapple pastry (and shami kebab!) and living landmarks like manager emeritus Charanjeet Singh. They are the icing on the cake. Talking of which, a large butterscotch cake, please.

Be always there for me