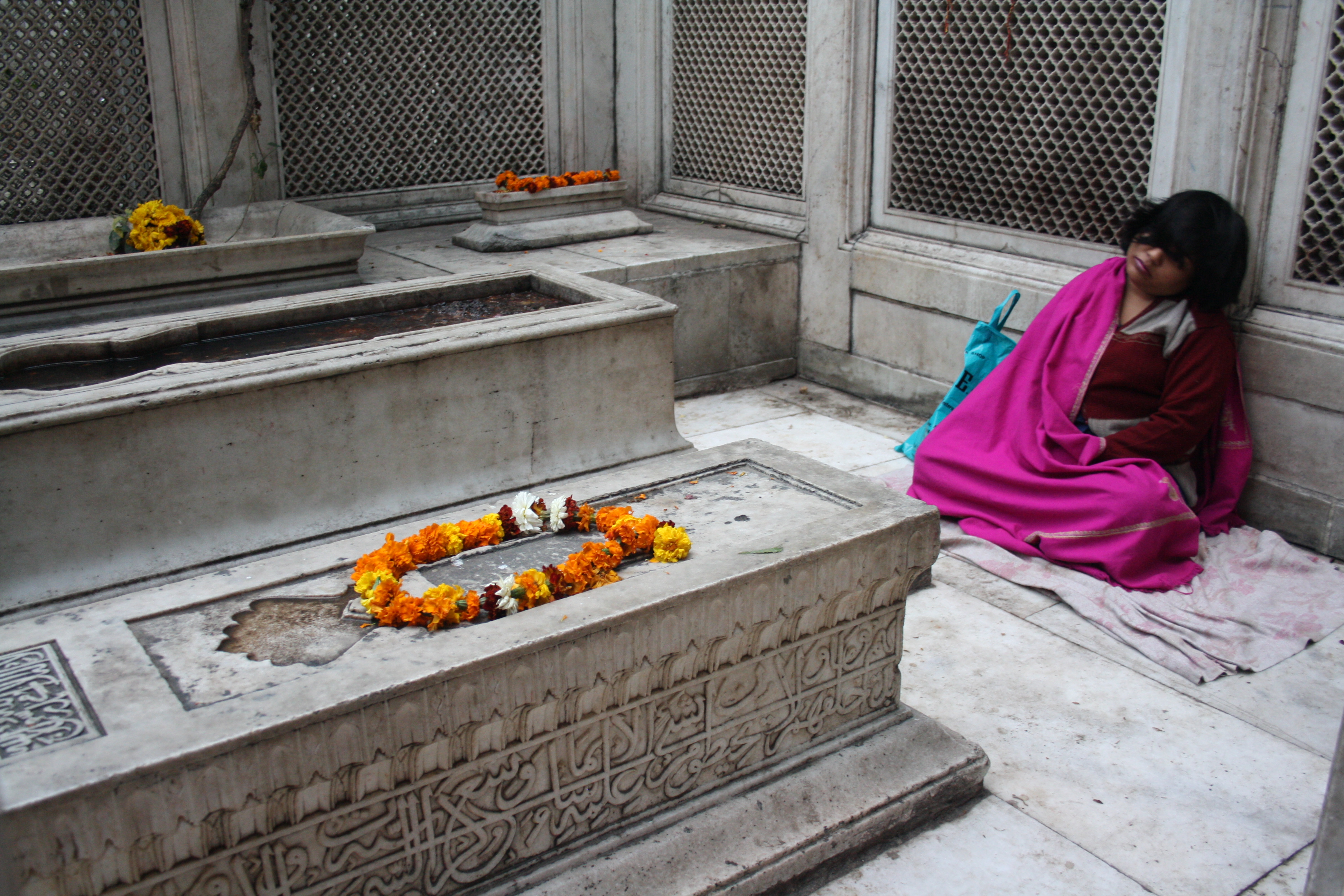 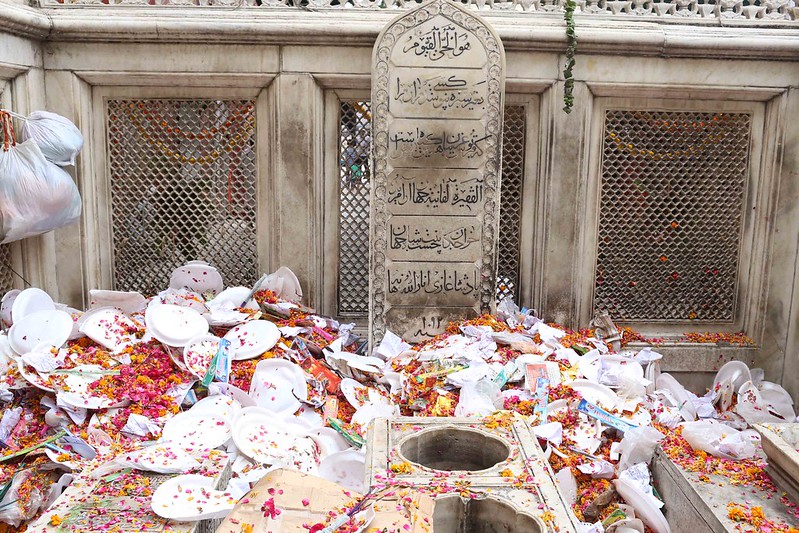 In a city notorious for its hostility to women, a cramped, little-known monument has emerged as their private sanctuary.

Even stranger, this unlikely place is tucked into one corner of Delhi’s most famous Sufi shrine, the dargah of Hazrat Nizamuddin Auliya, hardly a feminist paradise.

To be sure, women can visit the dargah, but they are not permitted to enter the chamber where the 14th century mystic lies buried. Not even Salma Ansari, the vice-president’s wife and a frequent visitor, can enter. There are a number of other graves within the dargah, among them poet Amir Khusro’s. Women are not permitted there either.

“I have doubts about the antecedents of this rule,” says Sadia Dehlvi, author of Sufism: The Heart Of Islam. “Hazrat Nizamuddin used to meet everybody, including women. This rule must have been introduced long after him, somewhere down the centuries.”

Certainly, one discreetly situated, open enclosure—just across the courtyard from Hazrat Nizamuddin’s tomb, screened off by a filigreed partition of marble—does not observe this rule. This is one place where women are not denied entry—in fact, a famous woman is buried here.

This is the resting place of Jahanara (1614-81), often referred to by pilgrims simply as baji (sister) or fakeera, an alms-seeker. In reality, she was a princess, daughter of Mughal emperor Shah Jahan.

“Jahanara is the luckiest woman on the planet,” says Ms Dehlvi. “A great devotee of Hazrat Nizamuddin, she is buried so close to him.”

In a way, Jahanara’s tomb symbolizes those very few monuments in the Capital that commemorate the lives and times of women from Delhi’s history. It has become a place where women try to keep the men at bay.

A small women’s-only club has come into existence. The enclosure is home to a sisterhood of afflicted souls. Every day, it sees a gathering of at least a dozen women sitting around the tomb—whirling, moaning, swearing, sobbing. One or two can be seen prostrate.

To a person witnessing such a scene for the first time, some of these women may look like they are urgently in need of medical help. They are said to be possessed by jinns, creatures made of fire, according to Islamic doctrine. Accompanied by relatives, the women come from distant towns to rid themselves of their demons.

Jahanara’s good fortune in getting a burial place in these hallowed grounds is explained partially by the privilege of her birth. Members of the Mughal royalty were almost always buried close to Sufi shrines. Humayun’s tomb, for instance, is a 10-minute walk away. Bahadur Shah Zafar, the last Mughal emperor, had chosen his burial place long before his death, adjacent to the Sufi shrine of Khwaja Qutbuddin Bakhtiar Kaki in Mehrauli (though he was eventually buried in Myanmar, where he was exiled by the British).

Indeed, the enclosure next to Jahanara’s is the grave of Muhammad Shah Rangeela, a lesser-known Mughal ruler.

But Jahanara’s open-air tomb chamber is unique in that it is the only one in the dargah to have the graves of three women—she is buried alongside Jamalunnisa, a Mughal princess and the latter’s daughter.

You can count such places on your fingertips. There is Razia Sultan’s tomb in Old Delhi, but very few visit the resting place of the city’s first woman ruler. Instead, the courtyard there is used as a men’s-only mosque. There is the tomb of Jahanara’s sister, Roshanara, near Ghantaghar in north Delhi, but just a thin strip of recessed earth is said to mark her exact burial place. Agra, of course, is home to the world-famous tomb of Shah Jahan’s wife Mumtaz Mahal, and emperor Jahangir’s wife Noor Jahan is buried in Lahore, Pakistan.

The Mughals ruled a vast swathe of the subcontinent from Delhi for more than two centuries; all that remains here of their preeminent women are a few markers. There are a few buildings built by Mughal-era women, such as Humayun’s Tomb (commissioned by his widow), Fatehpuri mosque in Chandni Chowk, Mubarak Begum Masjid in Chawri Bazaar, Adham Khan’s tomb in Mehrauli, Ghata Masjid near Dilli Gate and the Dargah Shah-e-Mardan in Jor Bagh. Today, however, they are controlled by men.

“That monuments dedicated to women are few and far between is reflective of the reality that women in positions of power and privilege were few and far between,” says Rakhshanda Jalil, author of the voluminous Invisible City: The Hidden Monuments Of Delhi. “Delhi also has a few other minor monuments like Dadi Poti Ka Makbara (in Hauz Khas) or Bhuli Bhatiyari Ka Mahal (on the central Ridge) that have generic names rather than precise ones, perhaps because of their association with some feminine legend. But we don’t know those women—history did not validate them.”

At Jahanara’s tomb, none of this matters. Burqa-clad Zubeda, a young woman who uses one name, has been living there for more than a year with her mother. “I am much better,” she says. “I was not able to even swallow a sip of water when I arrived here from my village (near Varanasi, Uttar Pradesh). I was constantly throwing things at people and uttering bad words. But that wasn’t me. It was the jinn.”

Pointing at the dome of Hazrat Nizamuddin’s tomb, she says, “I’ve improved due to Baba. We look at him (Hazrat Nizamuddin) through the (stone) jaali, and since the men outside in the courtyard can’t look at us, we remain in purdah.”

Ms Zubeda’s long stay in Delhi is being funded by her brother, who sends their mother money every month. Turning to Jahanara’s white marble tomb, she says, “Apa (sister) said that only sad people should come to her, for then they would return happy.”

Most of the women present are from villages in eastern Uttar Pradesh. The few who were willing to talk said they were suffering from diseases that “could not be spotted in X-ray reports”. Only Sufi saints, they believed, could cure such illnesses.

In a case of reverse discrimination, the men who are possessed by jinns are not encouraged to enter Jahanara’s enclosure—they can be found languishing beside a tomb near the dargah’s entrance, where there is no quiet or privacy.

“Here, we pray, we enjoy, and we listen to the qawwalis out in the courtyard, so why should we let men interfere?” says a woman visiting from east Delhi’s Laxmi Nagar. She talks largely in Hindi, but the moment she utters the English word “enjoy”, all the women in the enclosure begin to laugh.

Another day, the women there are in different stages of encounters with their inner demons. One shouts as if fighting with somebody. Another makes a sound as if she is throwing up. The third flails her head wildly, her long hair flying around her face. A while later, they stop, as if they need to recoup their energy. Biryani packets are opened, tea poured from a flask, and small talk begins as if Jahanara’s tomb is a canteen.

Such intimacy is missing in the dargahs of Bibi Fatima Sam in Kaka Nagar and Mai Sahiba in Adhchini—the only shrines to women Sufis in Delhi. Women are allowed into these two dargahs, but men have taken over most of the space.

To be sure, Jahanara is not a saint, but women visiting her tomb invoke her name because she was a devout follower of Hazrat Nizamuddin Auliya; her status as a royal princess is inconsequential. Shahjahan’s favourite child, Jahanara sided with her brother Dara Shikoh in the war of succession but later reconciled with her brother Aurangzeb, who became emperor. Jahanara also wrote many books on Sufism, including a biography of Ajmer’s Sufi saint Khwaja Moinuddin Chishti, and established Old Delhi’s famous bazaar, Chandni Chowk, as well as many public gardens across the empire.

Her tomb has no roof. It was her own wish, and is inscribed in Persian on a marble slab there. Translated by Camille Helminski in Women Of Sufism: A Hidden Treasure, the epitaph reads:

He is the Living, the Sustaining/ Let no one cover my grave except with greenery/ For this very grass suffices as a tomb cover for the poor/The annihilated faqir Lady Jahanara/ Disciple of the Lords of Chisht/ Daughter of Shahjahan the Warrior/(may God illuminate his proof).

As it happens, green vines grow on Jahanara’s grave. 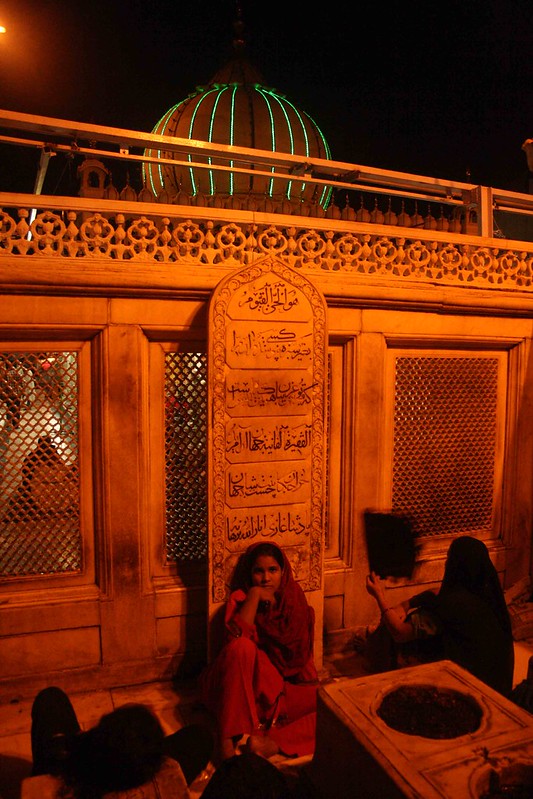 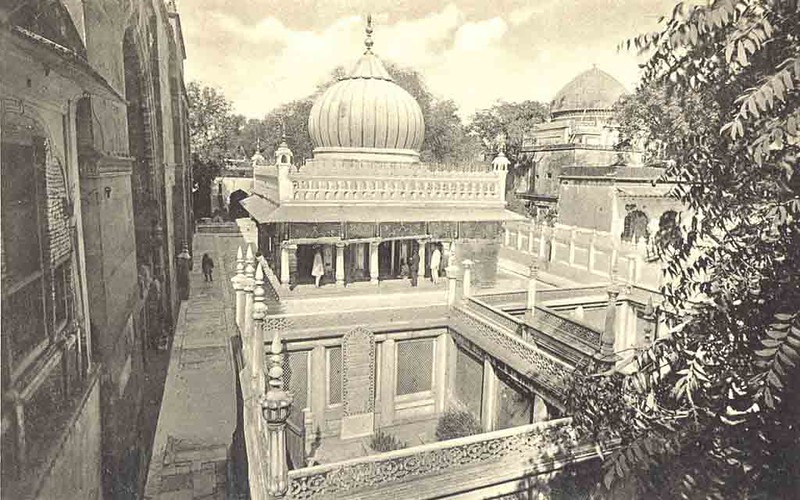 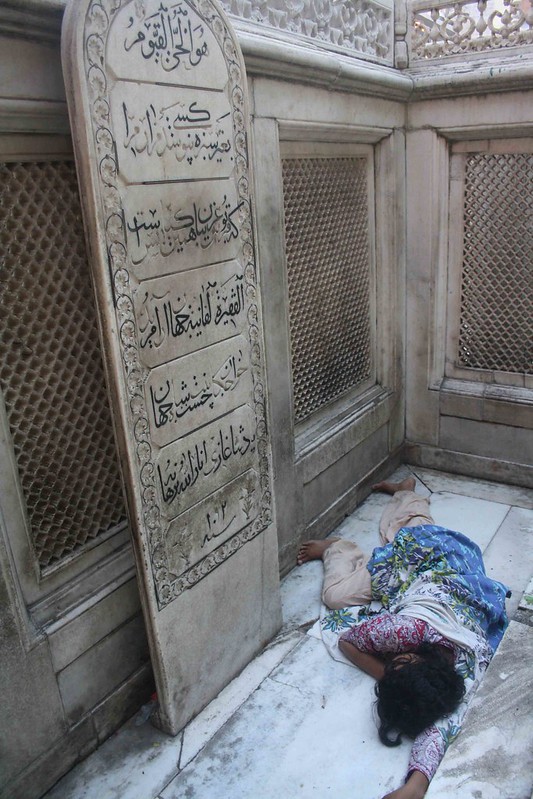 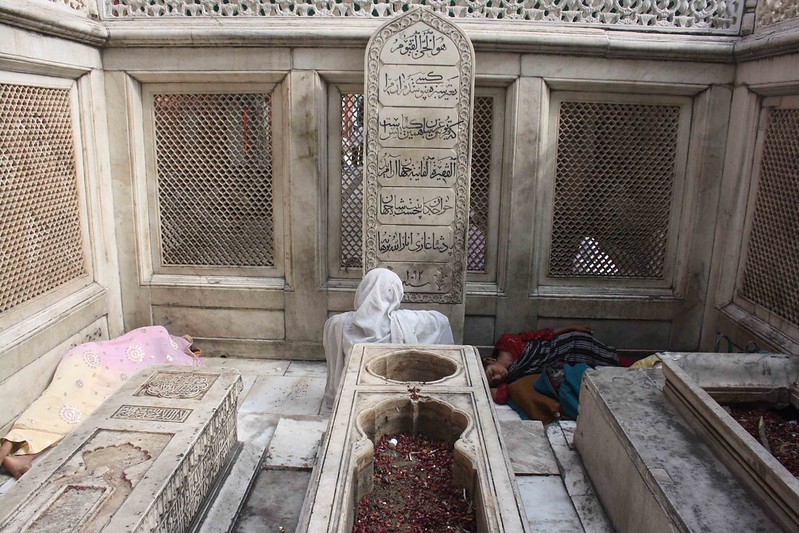 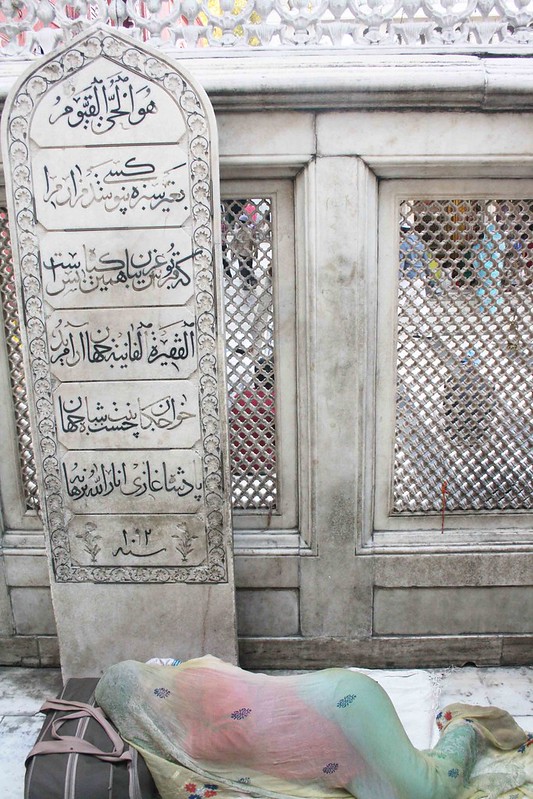 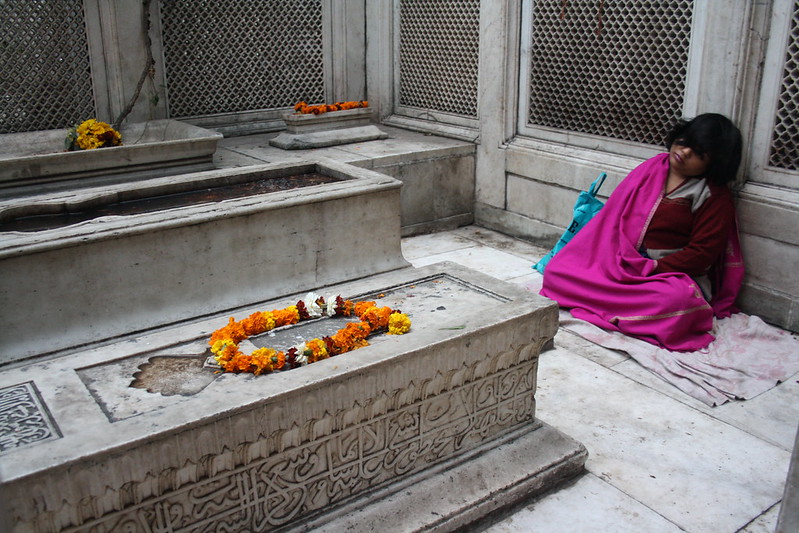 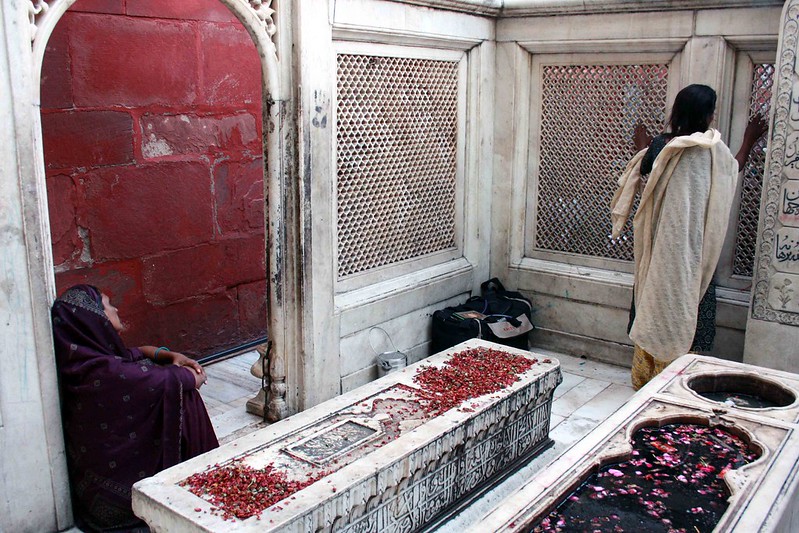 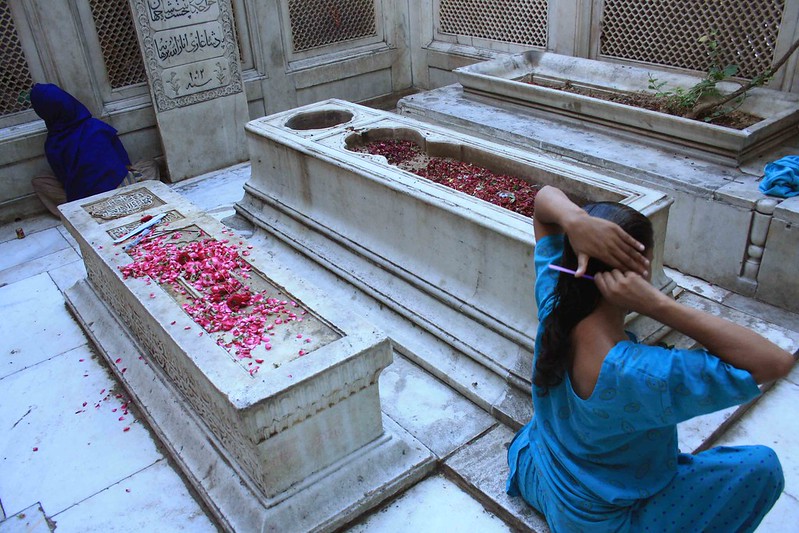 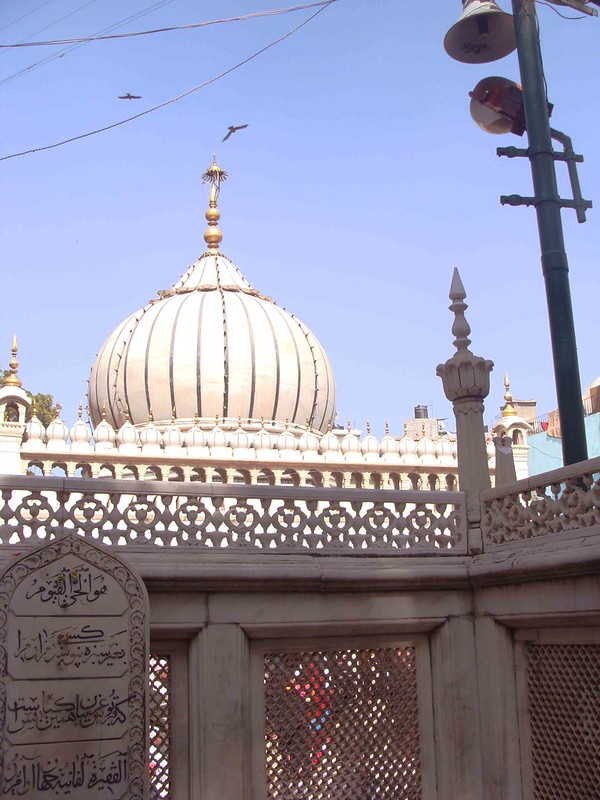