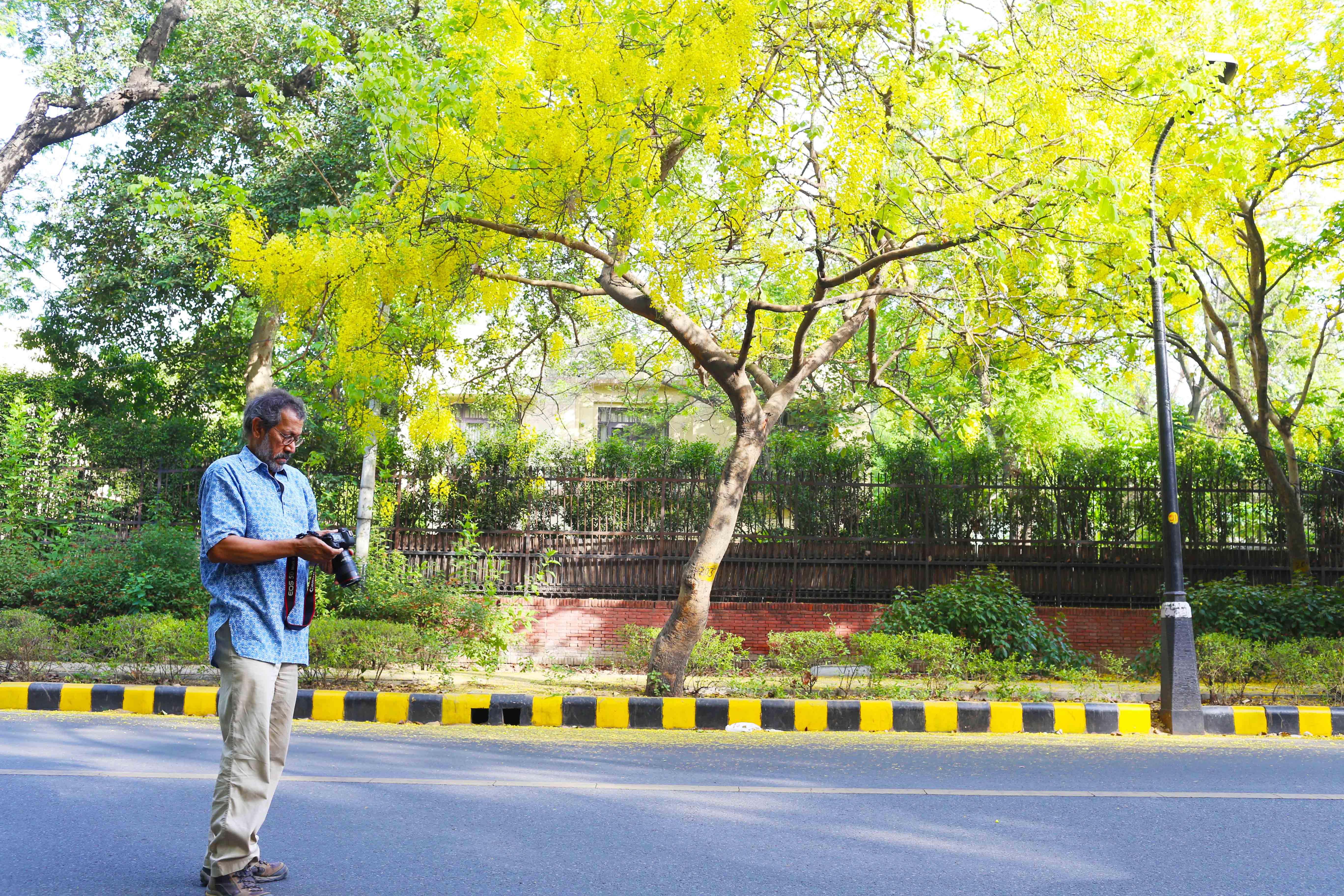 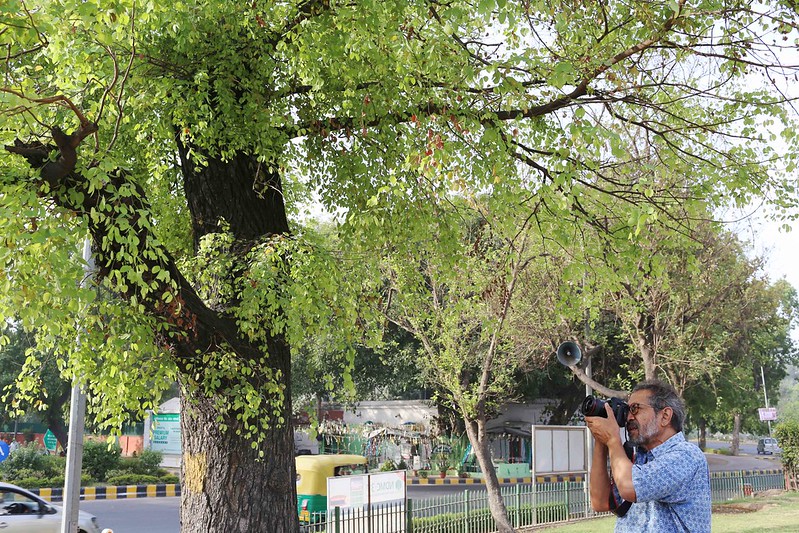 Though Delhiwallas wilt in the sweltering heat, summer is also the season when a great part of the city comes to life in a magically beautiful way. Walk along the wide roads of New Delhi and you will find a completely different world.

The trees lining the avenues are dressed in all their finery. The branches of the anjan tree on the roundabout near the Udyog Bhawan Metro station are just beginning to sprout leaves. The mahua trees on Rajesh Pilot Marg still bear a tint of red newness. The stately semal in Jor Bagh Market, under which the security guard of a nearby ATM takes his tea breaks, is dense with leaves.

Their soothing shade masks the debate on their suitability for a city like Delhi, which is dry for the greater part of the year. In fact, for all cities that have a climate like Delhi’s. For a new breed of ecologists argues that some of the species planted in the Capital may not have been the best choice.

The Delhi Walla was on an early morning walk on Janpath with Pradip Krishen, author of Trees Of Delhi. It’s the best time to appreciate central Delhi avenues, I was told. Some cars still had their headlights on. A few flying foxes—large, furry fruit bats—were still fluttering about, waiting to settle down for the day. Janpath is the only avenue in the Capital that plays host to a large population of flying foxes, according to Mr Krishen. They obviously really like the tall arjun trees here.

I asked Mr Krishen if the arjun is suited to Delhi.

“The arjun trees in New Delhi could have been a mistake,” he says. “British horticulturists didn’t want deciduous trees in their new imperial capital, trees that become bare in winter. They would have seen the arjun growing along riverbanks in dry forests, and probably thought, ‘Here’s a good-looking evergreen tree we can plant on our streets.’ They didn’t realize, of course, that the arjun is evergreen only when it grows next to perennial streams. Take it away from its context in a dry place, and it becomes deciduous. If they had been alive today, those British horticulturists might have been disappointed with how the tree they had so carefully picked behaved now.”

Mr Krishen says that for a long time now, horticulturists and landscapers have preferred evergreen trees for avenues. Like Rajpath, for example, with its jamun trees. They don’t want trees that become bare and unsightly for a few months. “It’s quite simple,” he says. “Evergreen trees come from wet places. They need to be watered and fed through most of the year. They just aren’t the most appropriate trees for places like Delhi. And for all the other cities in dry parts of India. If you plant evergreen trees in Delhi, you will have to water them and fertilize them all through the year. Doesn’t make sense!”

Native trees work with a very different strategy. Places like Delhi get rain for just six-seven weeks in the year— 60cm or so. There is very little rain in the remaining months. If a native tree is to survive in such a climate, it needs to “shut down” for some months, shedding its leaves as it goes into the long dry season. It’s the way trees adapt to a dry climate. “As necessary as a long neck is for a giraffe to browse in the tree-tops,” says Mr Krishen, “Or a shaggy coat is for a polar bear to keep warm in the snow.”

So, as January and February approach—four-five months after the rains have ceased—trees that are perfectly adapted to these dry conditions will shed their leaves. A tree transpires through its leaves, losing huge amounts of water, so it actually makes a whole lot of sense for a tree in such an ecology to go bare.

Take the gorgeous amaltas, or Indian laburnum–points out Mr Krishen. Here’s a tree that belongs to Delhi’s dry ecology. But the British didn’t plant them along New Delhi’s avenues simply because it goes bare for three-four months. Regardless of the fact that this was a sign that “it belonged”, and was perfectly at home.

In an age when sustainability and “water budgets” have become catch phrases, Mr Krishen says we ought to plant native deciduous trees that have adapted over millions of years of evolution and can survive without any help whatsoever, at home in precisely these conditions. With the soil, the climate, the moisture regime. Everything.

He has compiled a list of trees appropriate for the city in Pradip Krishen’s List of 100 Most Suitable Trees for Delhi (NCR), published by the Compassionate Living Trust, 2014. For this list, I have selected “dry” trees (“perfectly adaptable to Delhi’s ecology”).

1. Hingot: This tree is intolerant of shade; its fruit is eaten mainly by jackals.

2. Medsingi: It gets its name from pods that are curved like a sheep’s horn.

4. Dahi-Palash: Gond folklore attributes its rarity to it being cut down indiscriminately by the British to make the bark unavailable for healing the wounds of Gond soldiers.

5. Goondi: Found in hot and dry woodland, along rivers and on termite mounds.

6. Pania: It cannot grow in the shade. Noticeable by its dense spray of sweet-smelling flowers.

7. Chamrod: It has pea-sized orange edible berries growing in clusters.

8. Salai: Known as the Indian Frankincense tree for its aromatic resin or dhoop.

9. Aamti: Known as the “Malabar orchid tree”, it has white or pink flowers.

10. Kaniar: A nearly evergreen tree, it flowers in the winter but new leaves come in April and May.

11. Jhinjheri: With dense foliage, it is extremely drought-hardy.

12. Anjan: It has slender branches and its tiny leaves look like a butterfly’s wings.

13. Kair: Mentioned in the Mahabharat, it remains mostly leafless and has pink, edible fruit and lovely flowers.

14. Barna: It remains bare for a long time and is found in shady sites, often near water.

15. Kankera: A beautiful but barely noticed small and thorny tree, its leaves are food for the nilgai.

16. Ganiar: Its bright yellow flowers are offered in temples and it ably tolerates impoverished soils.

17. Dhau: Native to the Aravallis, it has small pretty leaves on drooping twigs and a silvery trunk.

18. Bistendu: If watered well, it develops a lush foliage, but it can also withstand drought well.

19. Thhor: Leafless for part of the year, it grows on rocky grounds and resembles cactus with spines arranged in spiralling rows on the trunk.

20. Palash: This native Delhi tree with its orange blossoms can withstand frost, waterlogging and poor soil.

21. Tota: It grows best in drier soil and looks best in April, when orange flowers come up on its bare branches.

22. Arni: Thriving on wastelands, it bears one of Delhi’s most fragrant flowers on a native tree. Even its roots are aromatic.

23. Kulu: Its gum is used as a denture adhesive. The tree can grow in stony and poor soil. It has large leaves and peeling, papery bark.

24. Anjeeri: Known as “Punjab fig”, it is not particular about soils.

25. Kaithh: It has fennel foliage and pale hard fruit similar in appearance to bel with an edible sweet and sour pulp. 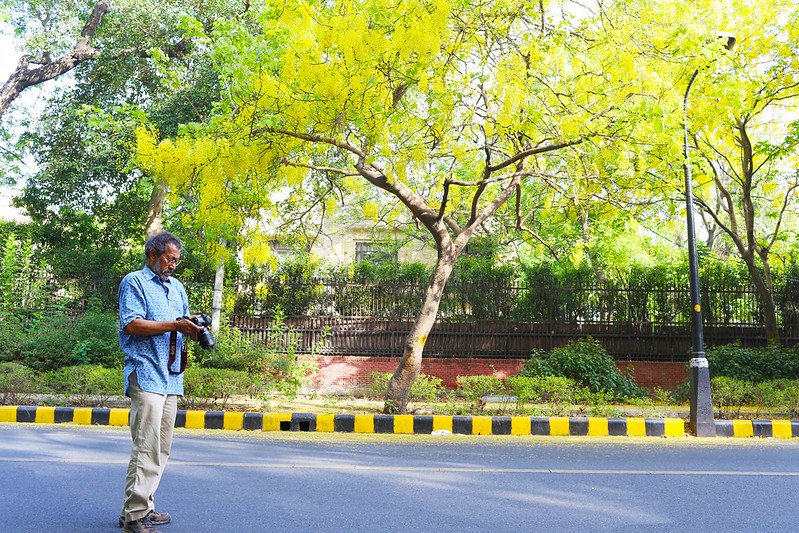 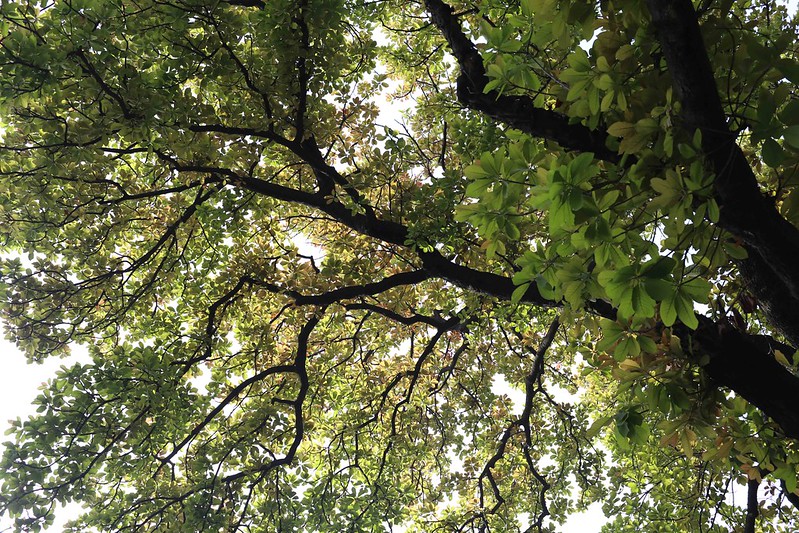 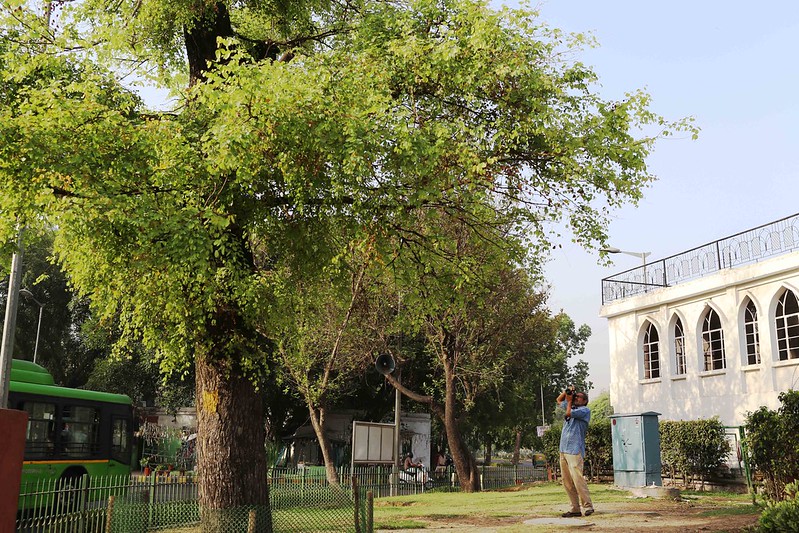 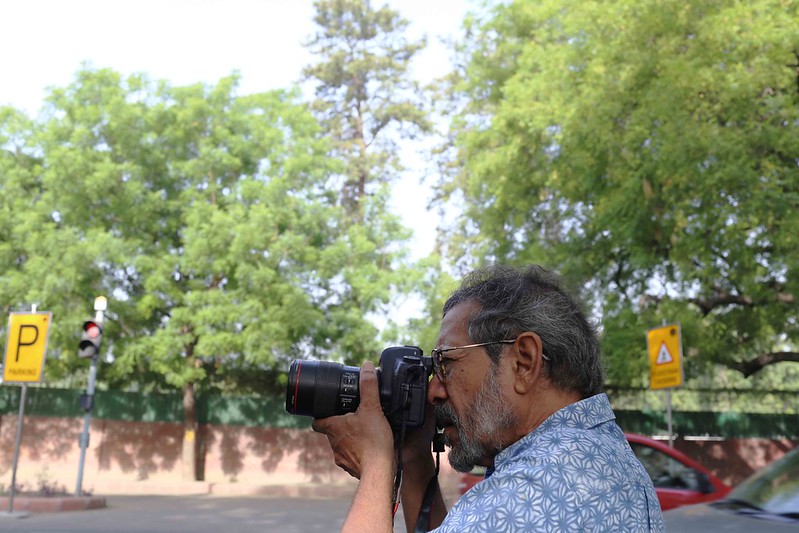 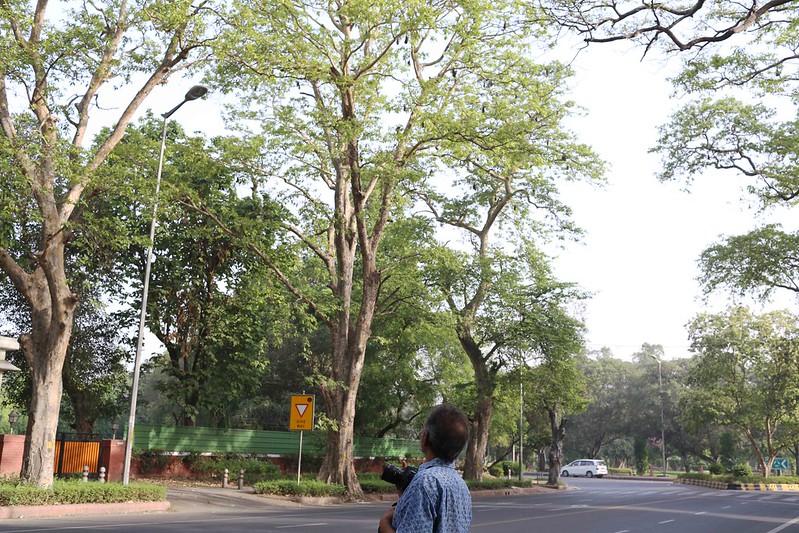 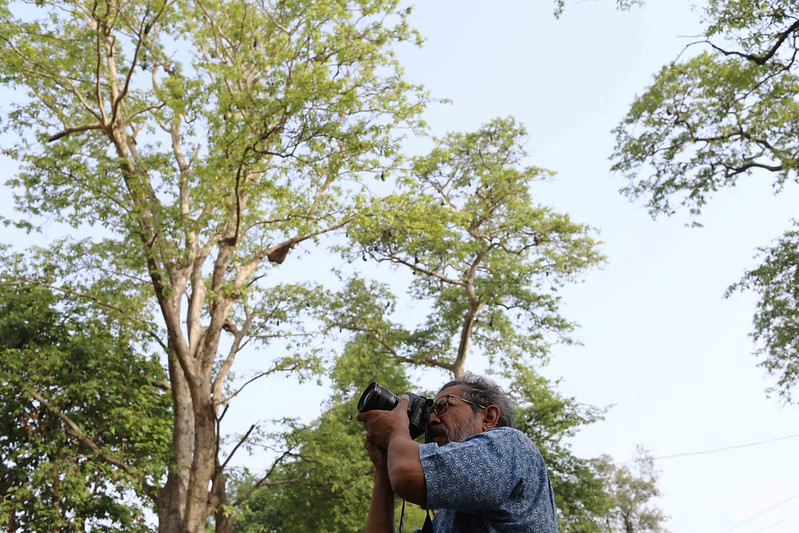