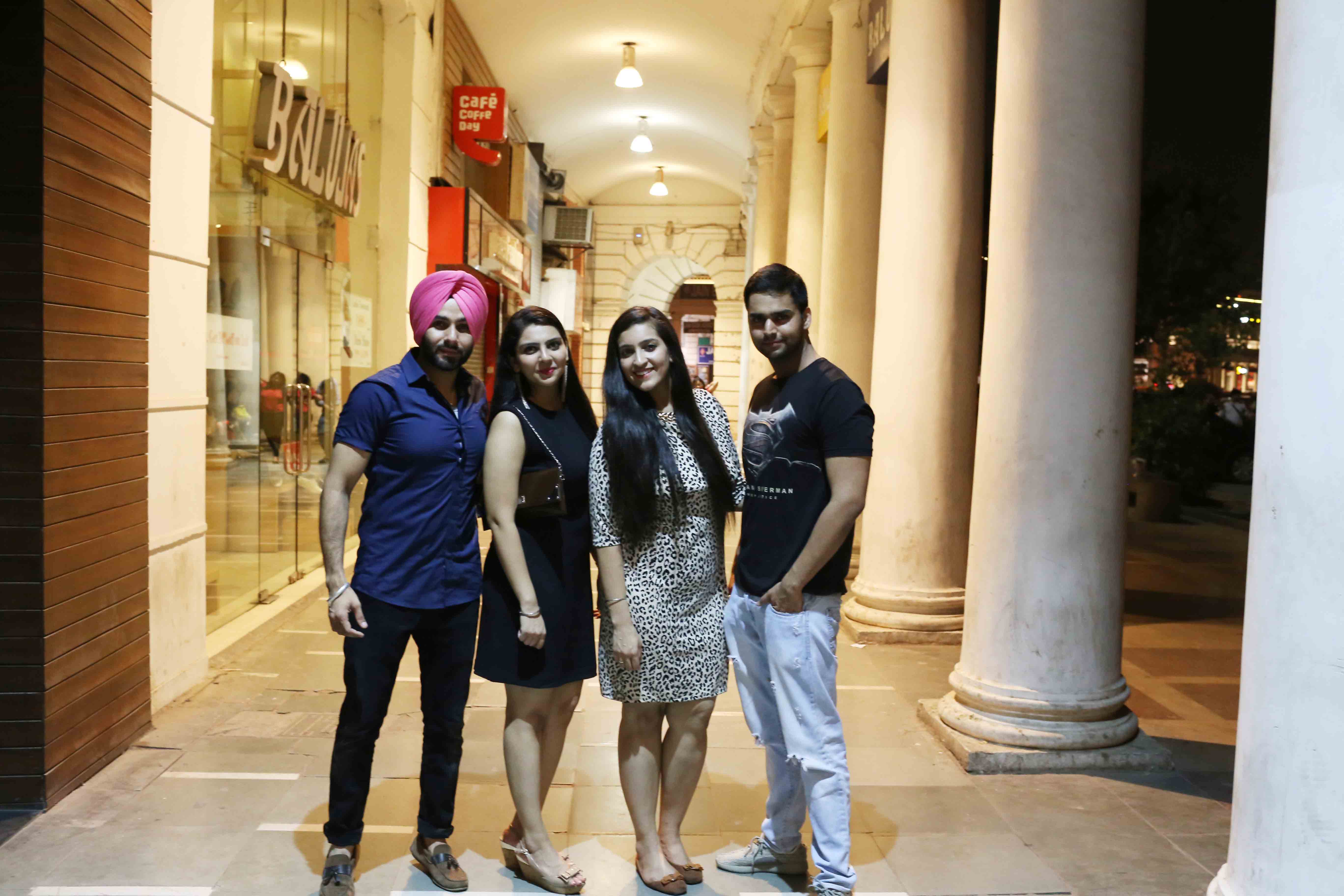 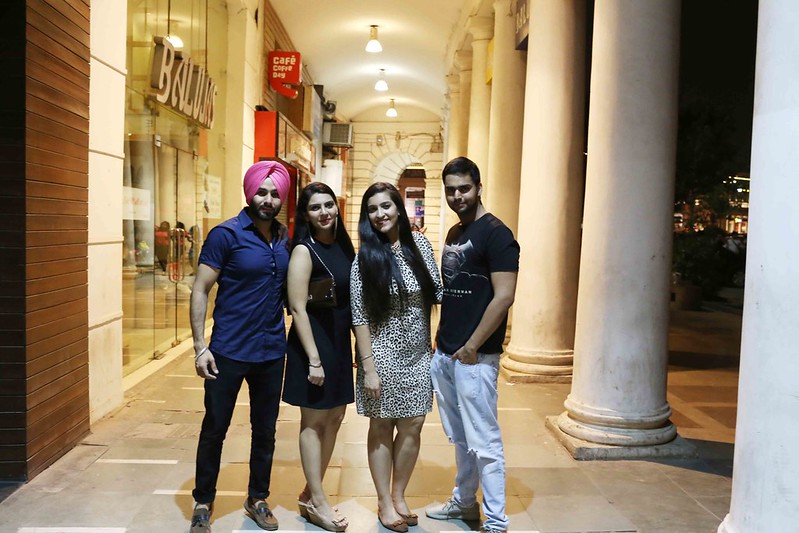 The new night life in the shopping district.

There they are. Just two minutes of walking through a deserted block, and you spot the party-ready midnight’s children, who confirm what one had suspected all along—Connaught Place (CP) still has pull—even at the midnight hour.

The male mannequin in an Inner Circle fashion store showroom window appears determined to rise above his circumstances—the abstract art canvas of paanstained white walls and pillars. Nearby are walking a cheerful group of four—two couples dressed for a night about town. They have just come out of a pub, having celebrated the start of the weekend, and will now drive back home to Vikaspuri.

It’s hard for anyone to remain immune to claims of how unsafe Delhi is at night. To a great extent, it applies to most parts of the city. CP, however, remains quite full of folks deep into the night.

May be because CP is too special, too deeply entrenched in the heart of Delhiites of succeeding generations. People in their 60s talk wistfully of it as their college life haunt, a time when they would hang out in restaurants that hosted jazz bands. For the next generation, CP was a no-go place after a certain time, though groups of friends and families still converged at Nirula’s for the famed Hot Chocolate Fudge (HCF).

In the late 1990s, CP would look forlorn as early as 9pm. The Central Park would empty out even earlier, except for men cruising for quick love.

Then came the construction of the underground Rajiv Chowk Metro station. For years, the whole area was dug up, for the Metro, pedestrian underpasses and new pipelines, and the city’s central business district slipped into almost terminal decline.

The crowds moved to other parts of Delhi. Eventually, the dust settled. Trees and bushes in the park made way for water features, trimmed greenery and an amphitheatre. Today, the park’s highlight is a gigantic national flag.

CP began to breathe. The Metro made it easier to reach it and the crowds began to return.

Though some things never change, the most remarkable change for a CP regular is the illuminated signs going up for new restaurants and gastro-pubs every so often. A great many of them have opened along the Inner and Outer Circles. Beautiful people sip cocktails till late. Happy crowds spill out of narrow doorways that lead to vast, quirkily named food and beverage ventures.

Tonight, the stroll along the Inner Circle is unraveling a rich buzzing life in its colonial-era corridors, which used to be hauntingly empty around this time some years ago.

Across the radial road is an ice-cream vendor with a hairstyle similar to that of Israeli leader David Ben-Gurion. He will stay for another hour, and will reach home in faraway Sonia Vihar only early morning. At B block, a small group—two women and a man—is cutting a birthday cake on one of the many cement benches that dot CP. The birthday girl’s face is being smeared with cream. One of the friends has come straight from his office in Gurugram and another took the Metro from Noida. They often meet on Friday nights, this being the intersection for the Metro’s Blue and Yellow lines. Since the service shuts down at 11.30pm, they’ll go home by autorickshaw. But not anytime soon. Three isn’t a crowd; it’s a party. Then there’s a gang of young guitarists loudly singing all those famous Arijit Sen love hits.

It’s the store guards who provide a surreal touch to night-time CP. Many lie sprawled on chaadars spread out on the floor right outside the glass doors of showrooms. The ironic contrast of makeshift beds and the luxuries showcased in window displays is haunting. One guard is using a brick for his pillow. Another is talking on his cellphone, oblivious to two black dogs cuddling next to him. A third eats paratha and mango pickle, with a dog waiting for tidbits.

Near a popular café, two couples are trying to get the perfect selfie. They’re from Kirti Nagar, and occasional visitors to CP on Friday nights. With so many new restaurants and pubs in the area, they’re interested in trying out one on every visit. Outside a branded showroom, there’s a fantastic example of jugaad, a folding bed neatly covered by a mosquito net that’s held in place by CP’s colonial-era columns. In D block, there are two people with their own open-air bedchambers, the leaves of a peepal tree fanning them.

Next encounter is with two women, who are taking each other’s photographs on their smartphones. One is in a stylish maxi dress. Their husbands are talking business nearby. The two couples are from Tagore Garden and Gurugram.

The most puzzling person is a middleaged woman in a plain red salwar suit. Holding a plastic bag, she shyly follows a set of revellers, but when a question is directed at her, she mumbles something incoherent and moves on.

The saddest sight materialises towards the end. No, it’s not that jasmine seller hawking his flowers vainly at car windows. After all, he still manages to grin sheepishly as he throws his plastic water cup into a hedge. It is a young couple with glum expressions most unbecoming of the Friday night spirit. Have they just broken up? Or is it something to do with their Mummys and Papas?

By 1am, the moon has risen behind Gopal Das Bhawan. CP’s corridors are getting even more crowded. People dressed trendily file past closed storefronts. The restaurants are perhaps emptying out. But a pizza outlet at N block is packed. Further along, two men ride their bikes in the Outer Circle corridor with superhero attitudes, never mind that they’re breaking every traffic rule in the book. Women in long flouncy skirts and short bodycon dresses walk by or stand idly, looking cheerful. There isn’t a woman—as far as one can tell—who’s there without a male friend or relative. But they’re all completely relaxed and evidently having fun. And then in N-Block Outer Circle one sees a super-rare sight—half a dozen young girls, just the girls, walking along freely, laughing, and chatting (see top photo).

This time of the night, this day of the week, women seem to have reclaimed CP. 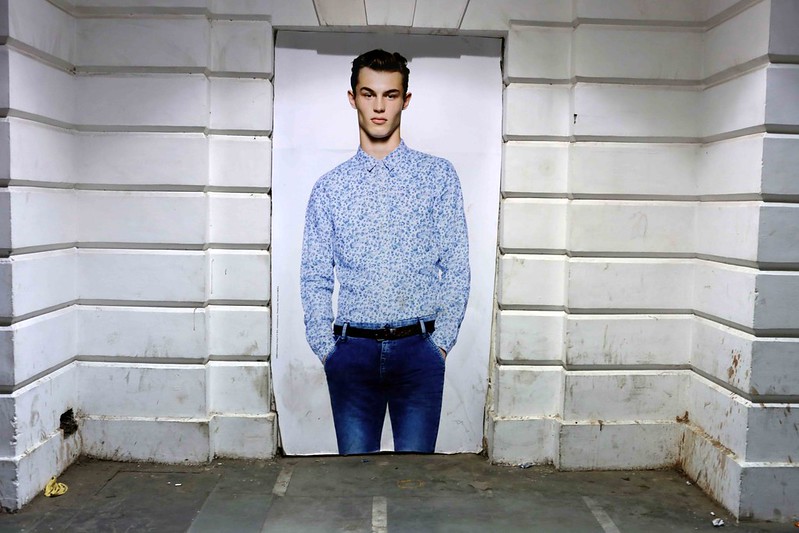 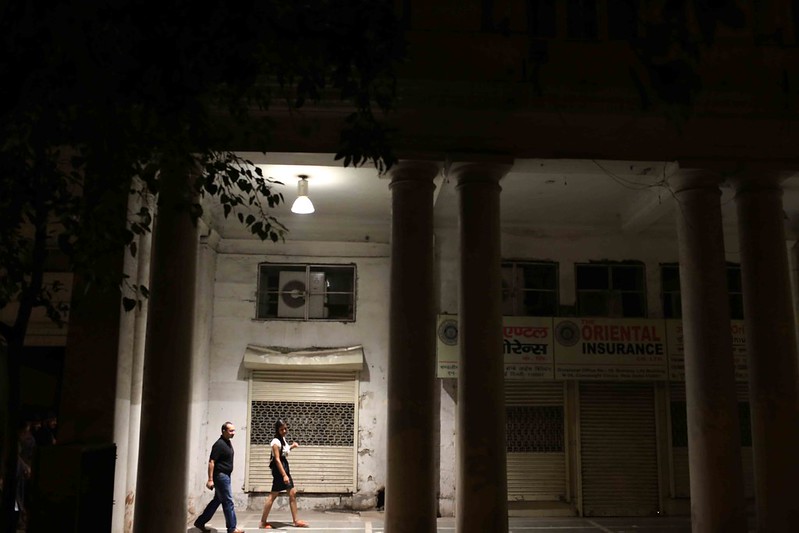 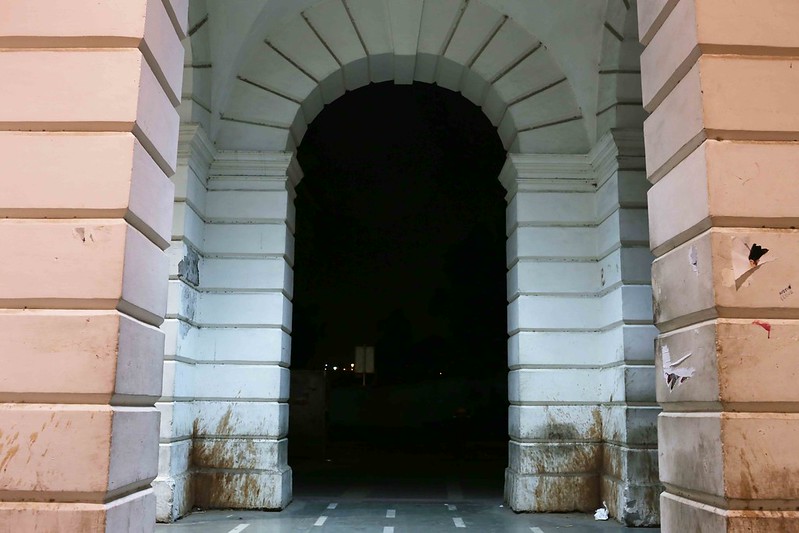 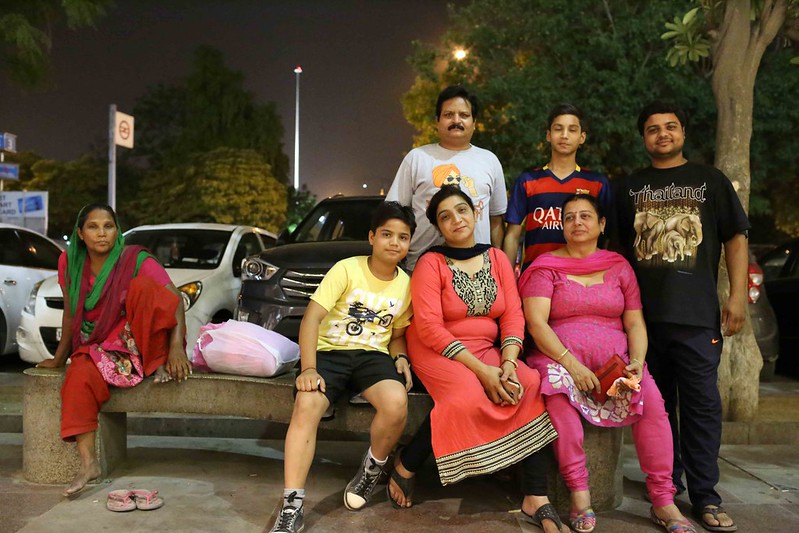 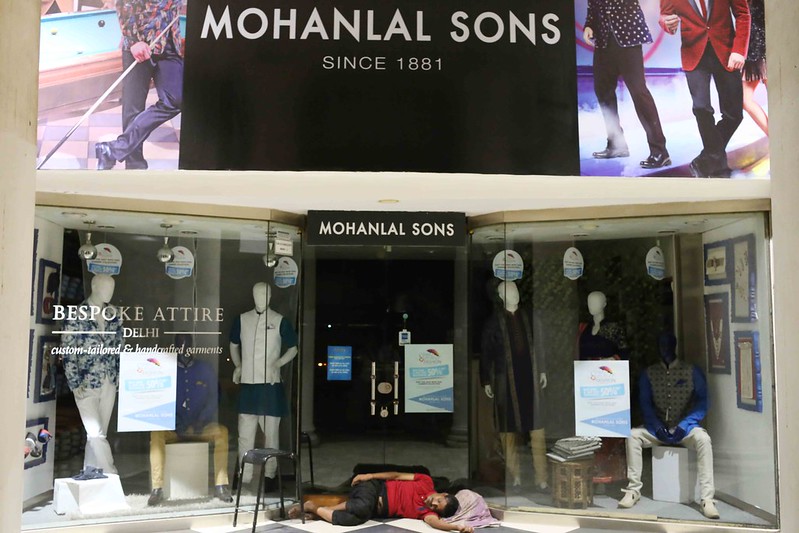 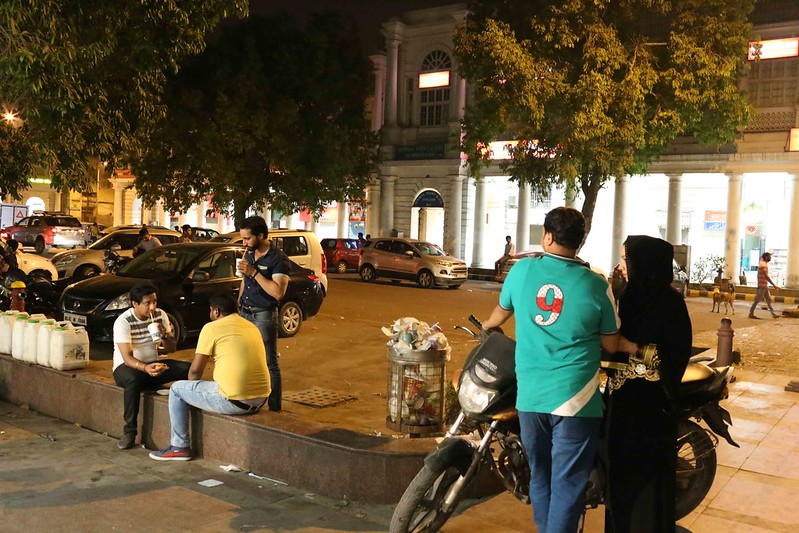 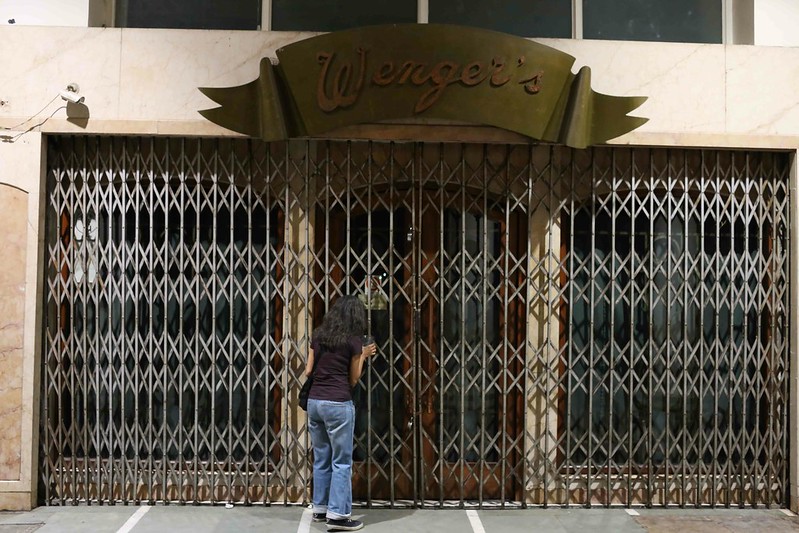 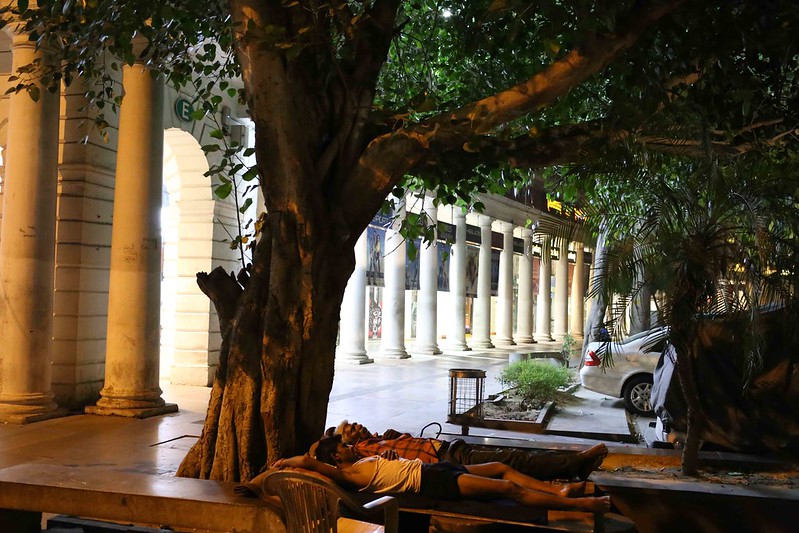 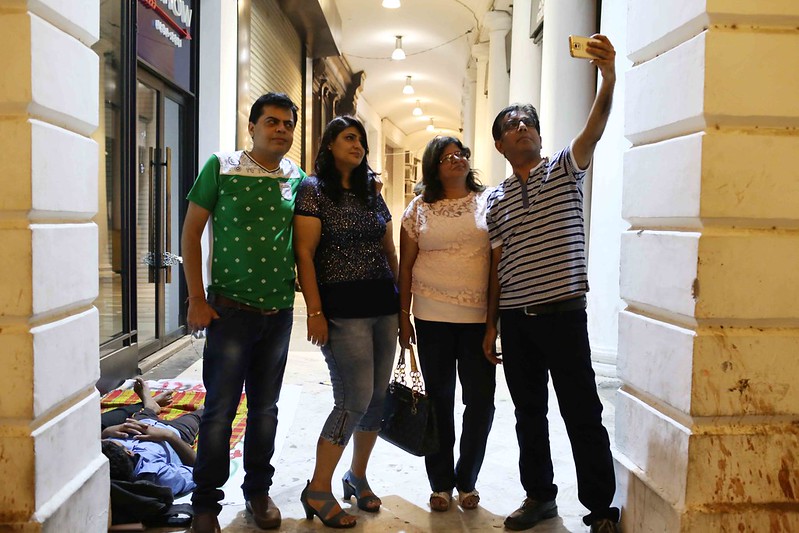 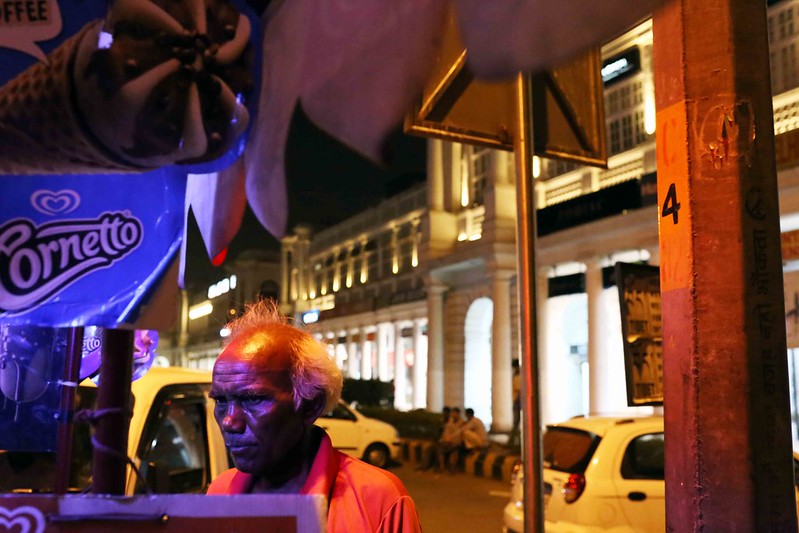 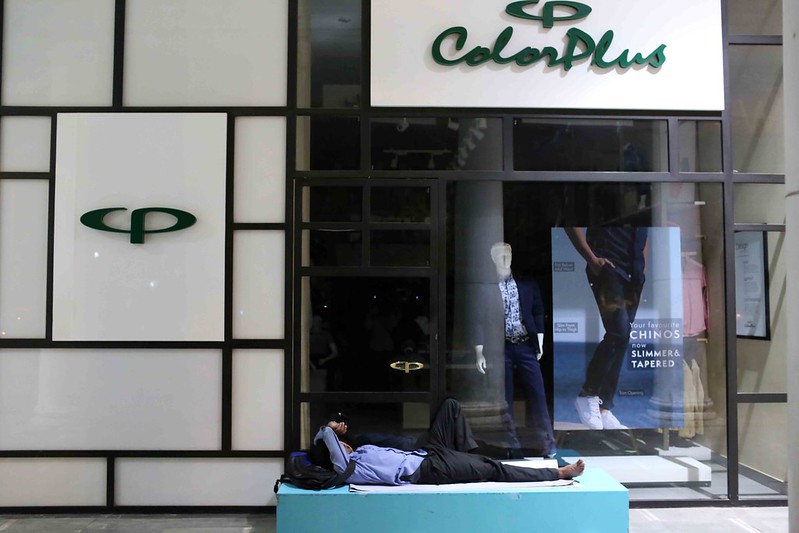 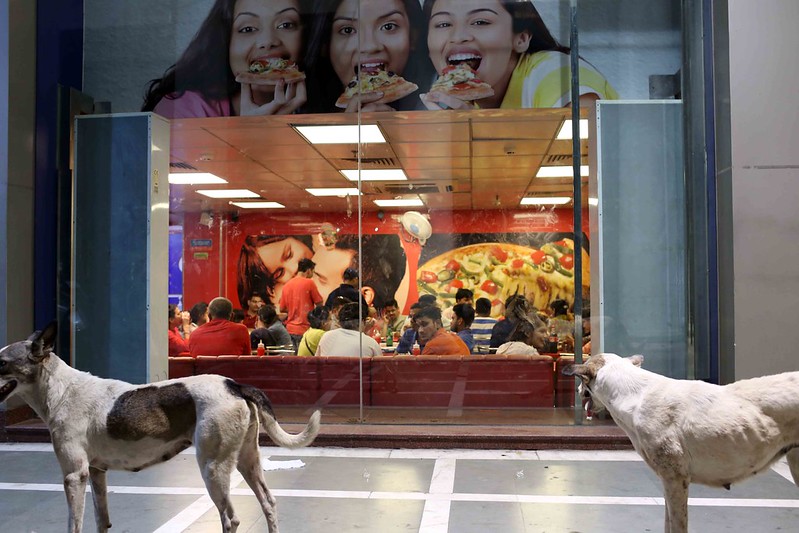 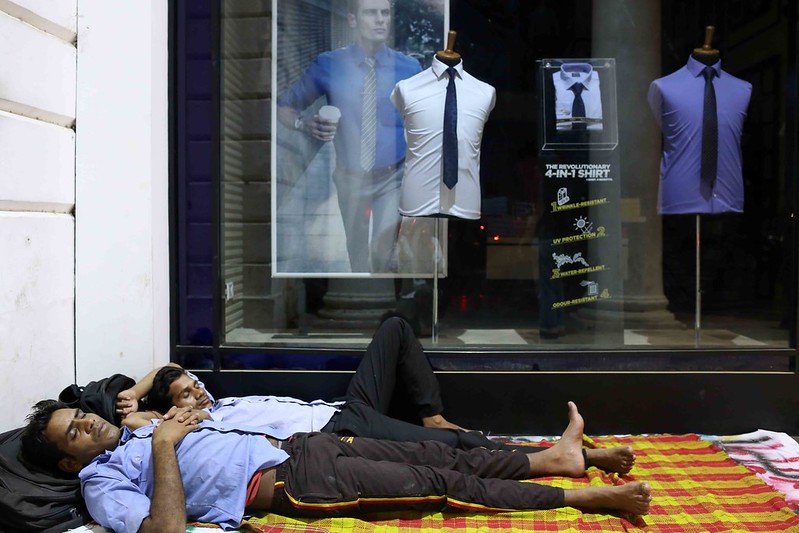 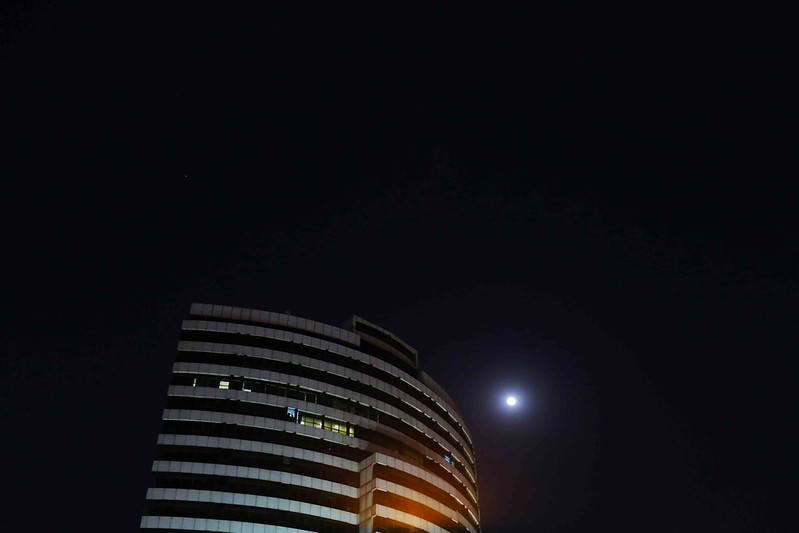 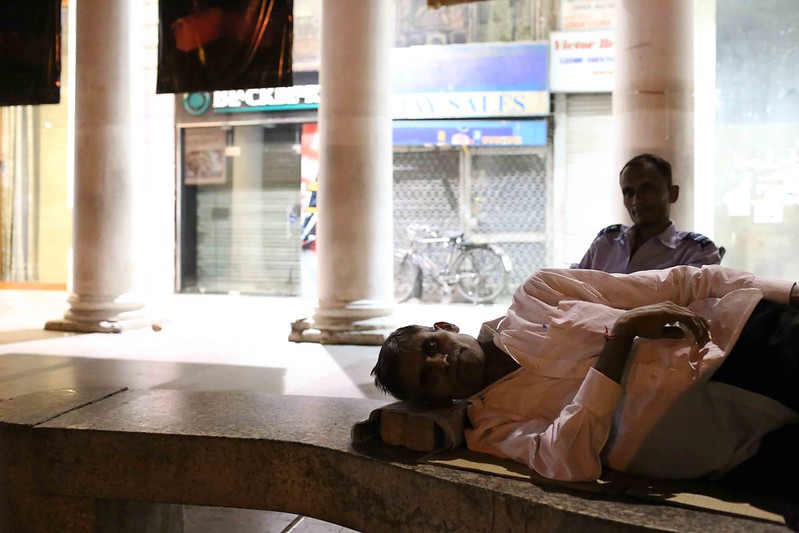 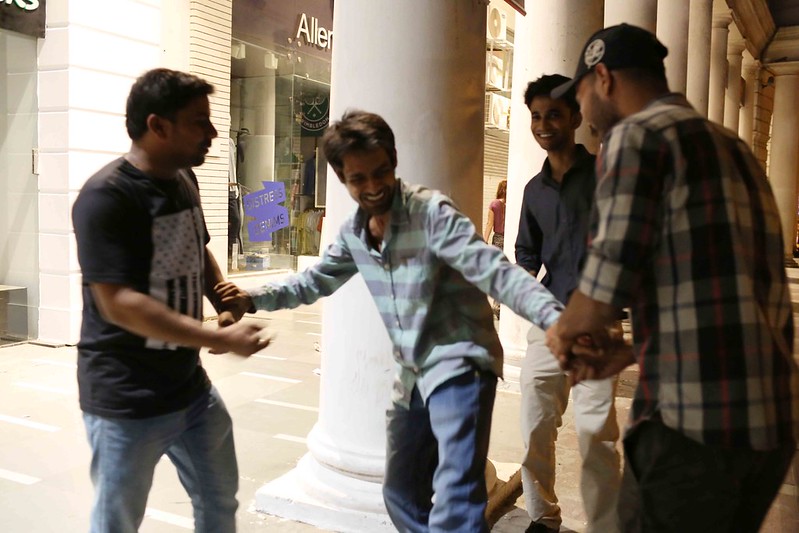 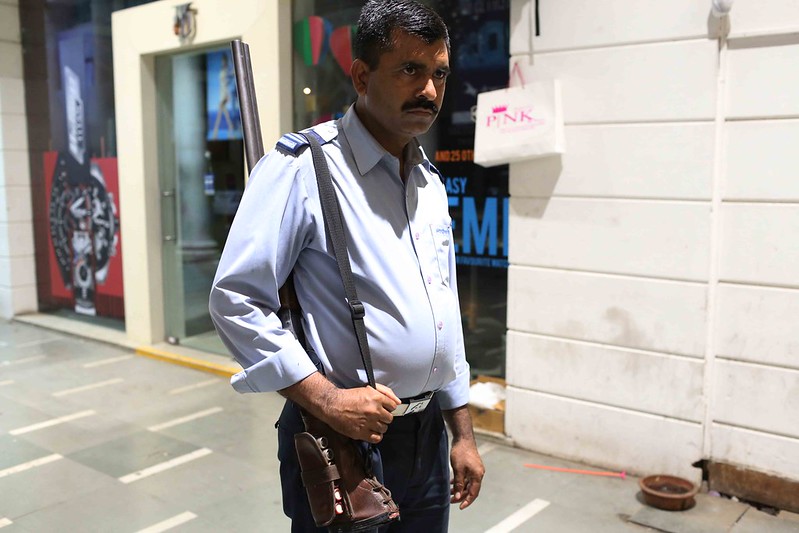 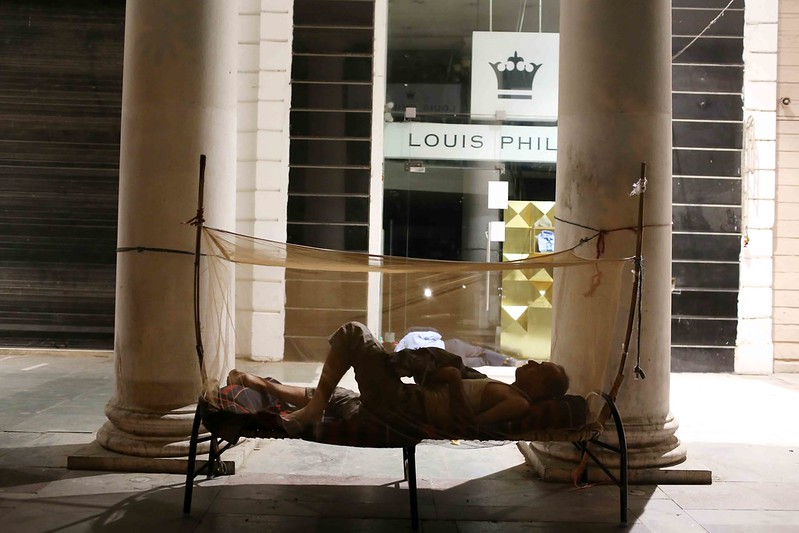 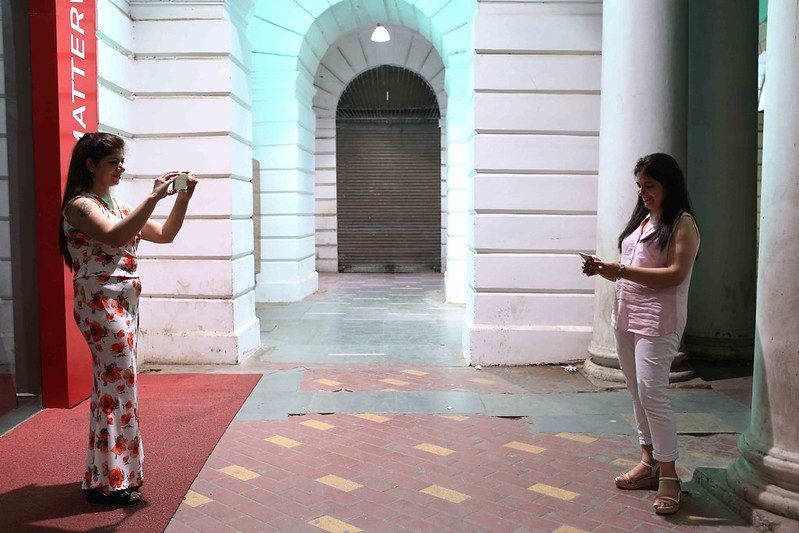 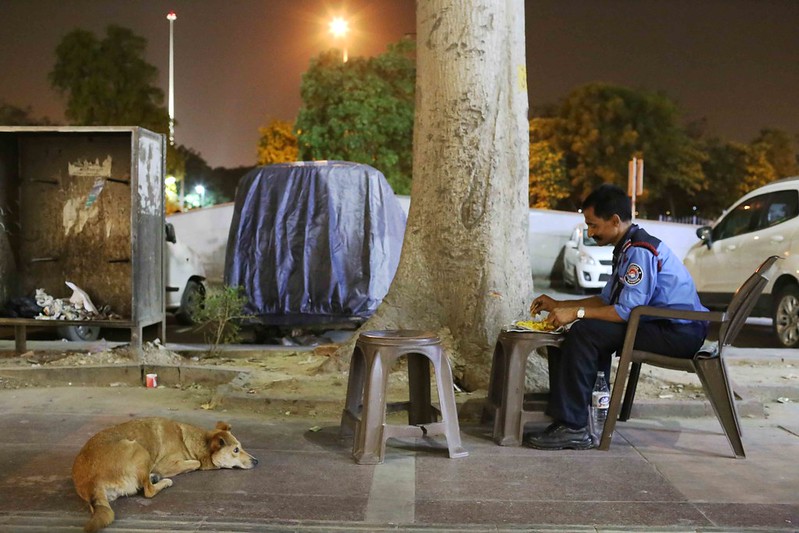 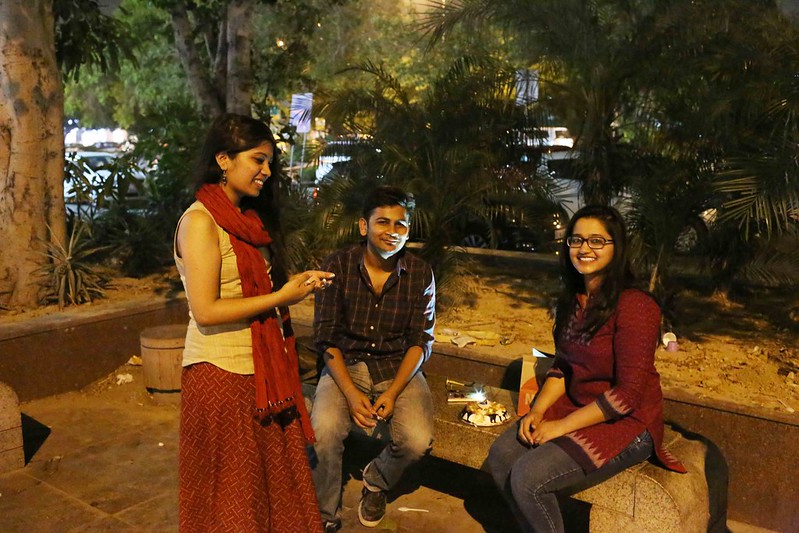 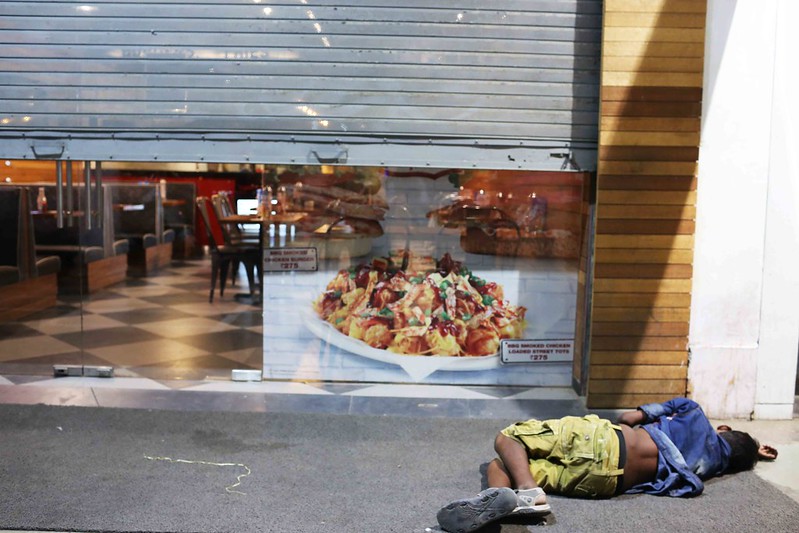 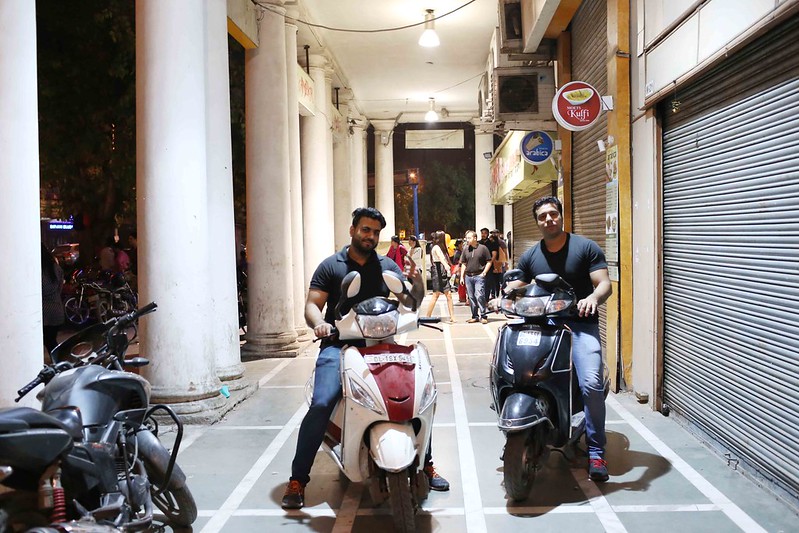 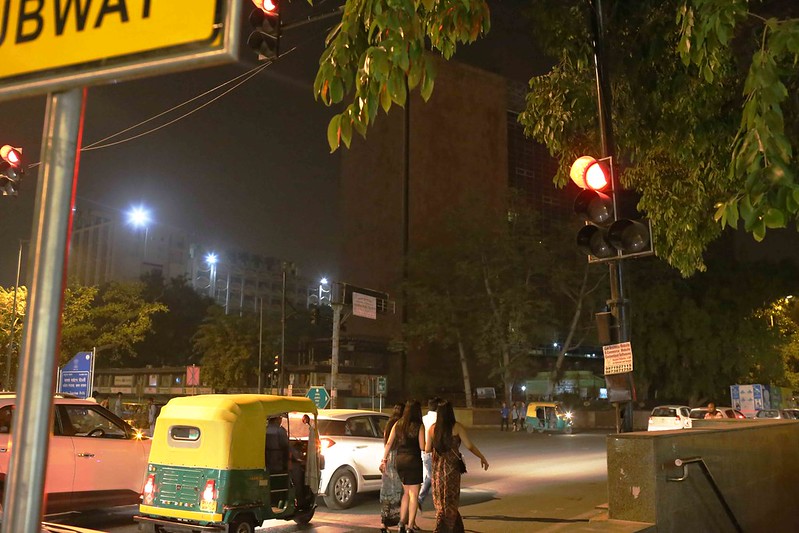 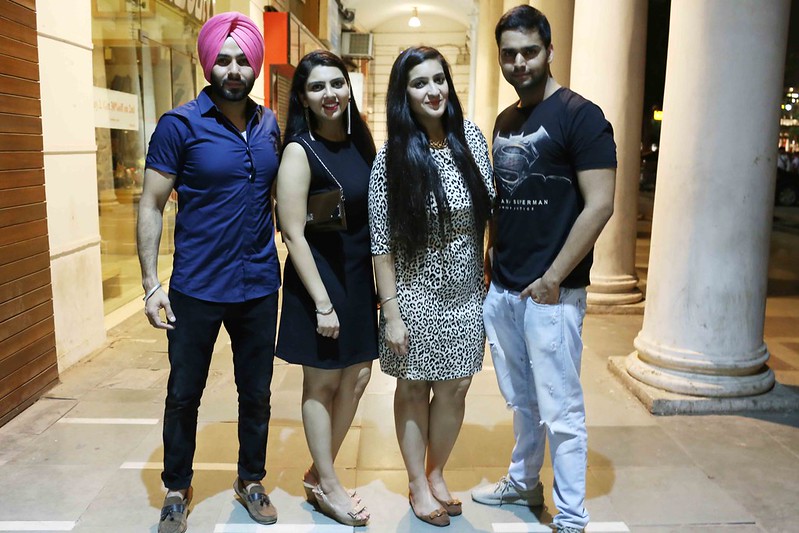