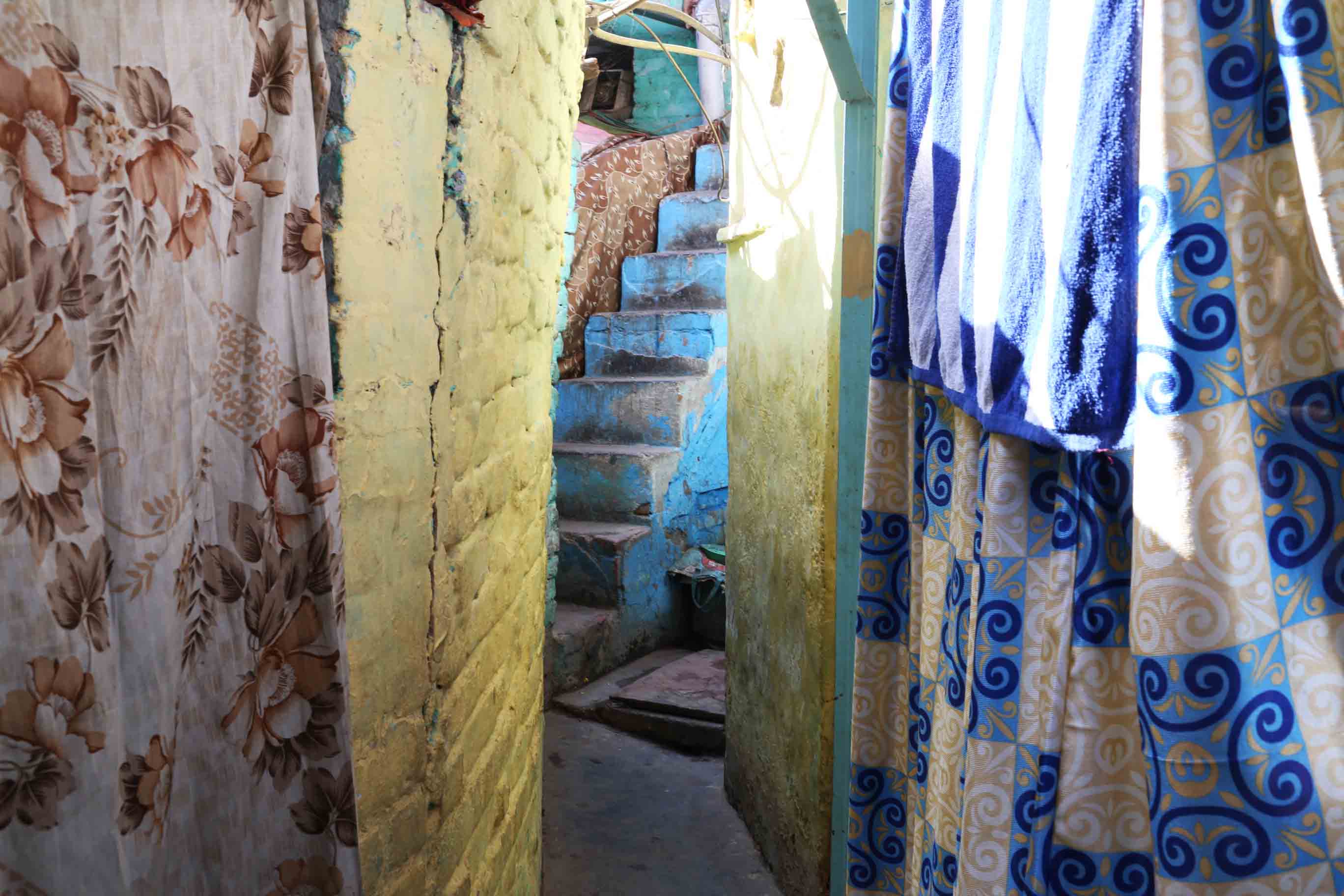 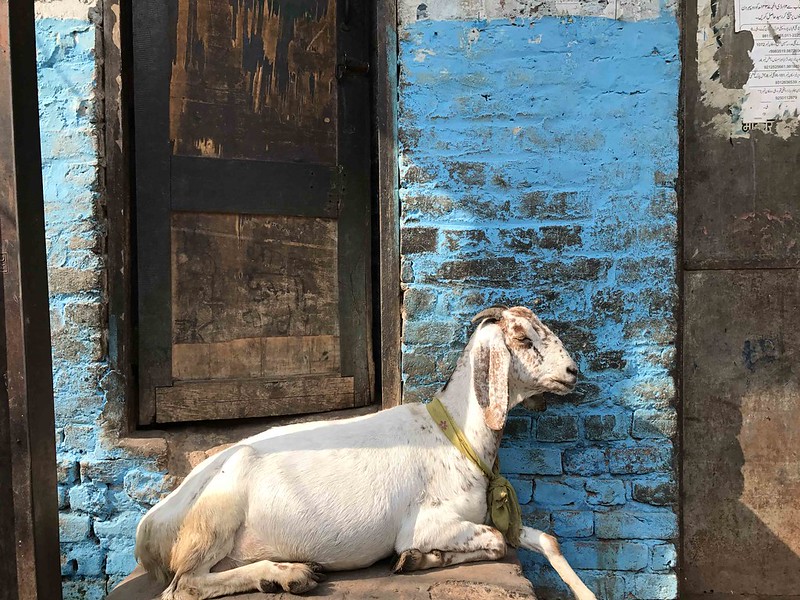 Life in the invisible city.

The place is like a kaleidoscope—the colours change swiftly. First, you are greeted by a yellow-painted brick wall. It turns pink around the corner. The next door is red. The facing wall is green.

The Delhi Walla is not talking of an art installation. This is the LNJP (Lok Nayak Jayaprakash Narayan) Colony, home to vegetable vendors and rickshaw-pullers. Anyone driving down from Connaught Place to Old Delhi can spot LNJP on the right side of the road, a few minutes after passing the five-star Lalit hotel.

The colony rises like a jumble of brick structures, royally snubbing conventional architectural aesthetics. I have passed by several times but never ventured in. Reading a book—In The Public’s Interest: Evictions, Citizenship And Inequality In Contemporary Delhi—made me change my mind.

Authored by Gautam Bhan, a senior consultant at the Indian Institute for Human Settlements, Bengalore, the book attempts to chronicle a Delhi “scarred by the eviction of bastis”—those congested housing enclaves of the poor. Ascribing the razing of urban settlements such as Nangla Machi and Yamuna Pushta in the past years to judiciary decisions propelled by public interest litigations (PILs), the book “shows how evictions have been fundamental to how urban space has been structured and produced….”

Mr Bhan estimates that the number of households evicted across more than 200 urban settlements in the last two decades stand between 70,000 and more than 150,000.

Intended for “students and scholars of sociology, urban studies, development studies and geography”, the book is challenging for a layperson. Even so, it gave me a glimpse of a world where one’s fellow citizens live in urban limbo, a world in which their homes and neighbourhoods are indexed under Orwellian names such as “resettlement colonies”, “unauthorized colonies”, “planned colonies” or—even more creative—“regularized-unauthorized colonies”.

Although these colonies are scattered all over the city and we might pass by some of them every day, the most frequent glimpse we have of their existence is when they find a mention in the city pages of newspapers—a massive fire broke out in this one, so many chikungunya cases in that one, or… well, when evictions are ordered by the court. Public’s Interest nudged me to enter one such colony to explore it in a less impersonal way.

If you stand outside LNJP, the only thing you see—the only thing I’ve seen for years—is a line of carpentry workshops and tea stalls. But it turns out that the narrow openings that look like entrances to private houses are in fact the lanes that lead you inside.

The daylight disappears the moment I step inside one of these alleys. The traffic sounds fade to a hum. The lanes are filled with the shouting and laughing of children. All my attention, however, is caught by the breathtakingly beautiful wall colours. It is like walking through the pages of an unwieldy coffee-table book set in Rajasthan. Patterned curtains hanging in front of each doorway make it even more intense.

LNJP emerged as a literary character in the 2012 book Trickster City: Writings From The Belly Of The Metropolis, which is an anthology of writings by 20 young Delhiwallas who were affected by the aforementioned evictions. Though LNJP residents suffered no displacement, some of the book’s contributors are from there. The following excerpt conveys the fragility of living in such a place. The narrator writes: “Earlier when there would be talk of the ‘removal’ of LNJP colony, people used to disregard it as a rumour. My mother used to say, ‘These are things that get said, but they never really happen. We used to hear this even when we began to live here, seventeen or eighteen years ago’…. But today, even though there are no rumours about breaking the dwelling, somewhere people have accepted that this space is not theirs any longer.”

Indeed, about a dozen people I interacted with in LNJP referred to their neighbourhood as an “illegal colony”. In other words, they willingly accept that their place has no right to exist. Mr Bhan points out, though, that the designation “illegal colony” is not part of the legal jargon—it’s merely a colloquial expression people use. “Like so many neighbourhoods in Delhi, LNJP straddles all the different degrees of so-called ‘illegality’ that define the city’s landscape,” he says. “It was and is, in part, a JJ (jhuggi-jhopri) cluster, in part an unauthorized colony, and, in part, an older urban village. Each of these forms have melded into each other over the four decades of the settlement, making claims to legitimacy varied and impossible to untangle.”

About 3,000 people call LNJP their home, says Masroor Ahmad, a dweller. The middle-aged vegetable vendor has been living here since his childhood. I meet him at a tea-stall. He says the colony came up 42 years ago. Before that, it was a graveyard, thick with keekar trees. As a child, Ahmad remembers playing around scores of graves covered with grass and bushes. All of that is gone now.

But how do such spaces materialize in the heart of cities?

In his book, Mr Bhan explains the emergence of Delhi’s unauthorized colonies by “the sheer inadequacy in housing stock, of land zoned in the development area for housing and the inability of many households to wait for allocations of housing stock built directly by the DDA (Delhi Development Authority).”

The most significant episode in LNJP Colony’s brief existence is said to be the fire of 2001. A woman vegetable seller, who chose to introduce herself simply as “Allah Rakha’s bahu (daughter-in-law)”, says that all the houses were destroyed. The good thing that came out of the incident, she says, was that the new houses were built with bricks and cement. Earlier, these were makeshift structures with tarpaulin roofs and cardboard walls.

In places like LNJP, with no assured legitimacy, everything could be uprooted any time. Daily life, however, has taken deep roots here. The sightings during a short walk are evidence enough: an elderly snack vendor standing still with his basket of golgappas beside an empty staircase; a young man holding a mousetrap with a mouse inside; a street seller walking around with a box of green and red glass bangles; and a young man taking a selfie inside a hair-cutting salon. The film song Ude dil befikre is heard from one of the windows.

On passing by a tea stall, I’m struck by an old-fashioned chipped kettle and a woman in a floral-print sari squatting on the floor. I’m wrong about the place: it’s not a hole-in-the -wall chai establishment, as I thought it was, but a private residence. The woman of the house is making tea for herself. My mistake opens my eyes to the reality of the place: living in cramped windowless houses where one small room doubles up as a kitchen and a bedroom, as well as, a drawing room. The woman says she’s keeping the door open for “fresh air”.

If only there was fresh air. Once you are inside this part of LNJP, it is impossible to say if it’s day or night. The brighter side of the absence of sky is that the area remains relatively cool during Delhi’s blistering summers and there are no bone-freezing chilly winds in winters.

In his book, from the data collected in 2009, Mr Bhan mentions that in the 2000s, only 33.08% of estimated Delhi’s population lived in planned colonies, which are “formal, legal, legitimate and planned”. Of the remaining, 5.3% had their homes in unauthorized colonies, which he describes as “those built on land not included in the development area in the DDA’s master plans or one built on land within the development area but not zoned for residential use”.

Like many other unplanned settlements of the kind, LNJP is highly susceptible to mosquito-ridden dengue and chikungunya fevers. Here, they spread like an epidemic during the post-monsoon months. Even worse, typhoid and tuberculosis stay on throughout the year.

“Every week I get at least five cases of typhoid,” says Mohammed Sabir, a medical practitioner who has been living in LNJP colony for 20 years. I meet the “doctor sahib” at his clinic. There’s a blood-pressure measuring machine on the table. The walls are pale green and a tilted handwritten board mounted on the wall says: “Winccoff for coughing, Shiny for pimples, Shape-Up for fat reduction”.

LNJP is smaller in size than the nearby Ramlila Ground—but it feels borderless. Dozens of narrow lanes branch out into narrower alleys stretching and criss-crossing each other so as to give an impression of endless labyrinthine pathways. I could probably walk there for hours, but after only 1 hour I ask for a way out. Surprisingly, daylight is just a minute away.

Notwithstanding LNJP’s extraordinary colours, I’m relieved to head back home. There, I happily rediscover the joys of having windows, and, more importantly, I relish the reassuring comfort of inhabiting a neighbourhood that is “planned” and “authorized”, and which seems to be here to stay. 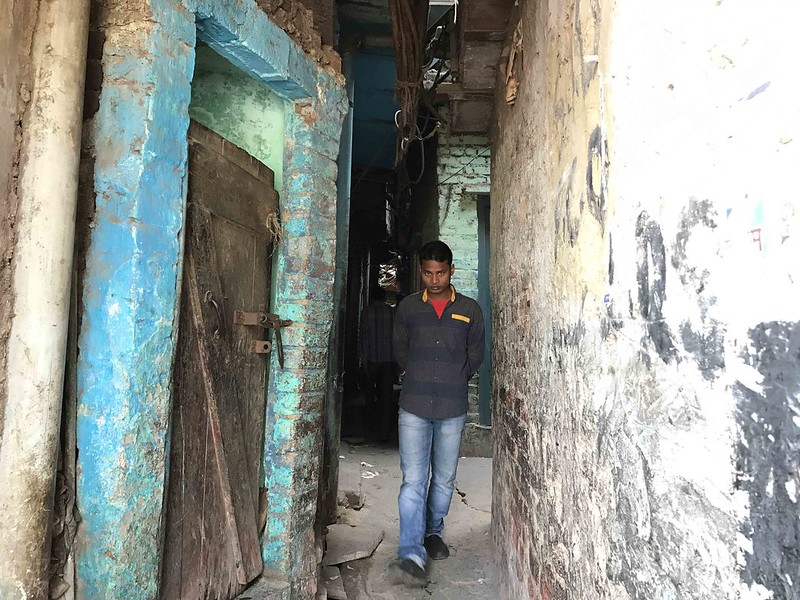 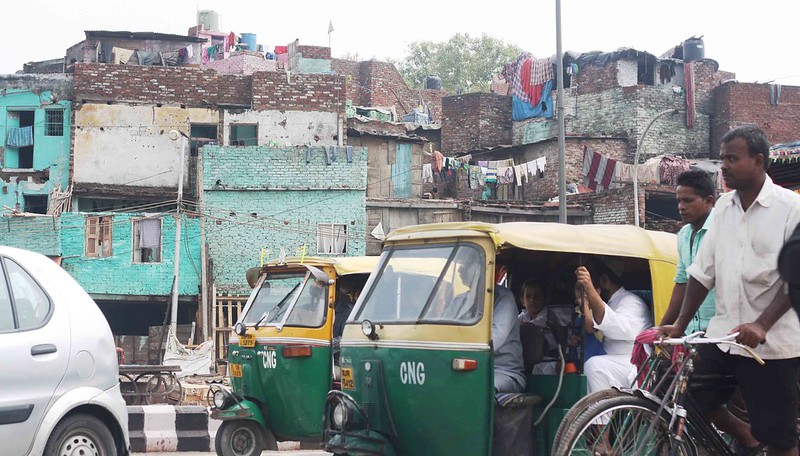 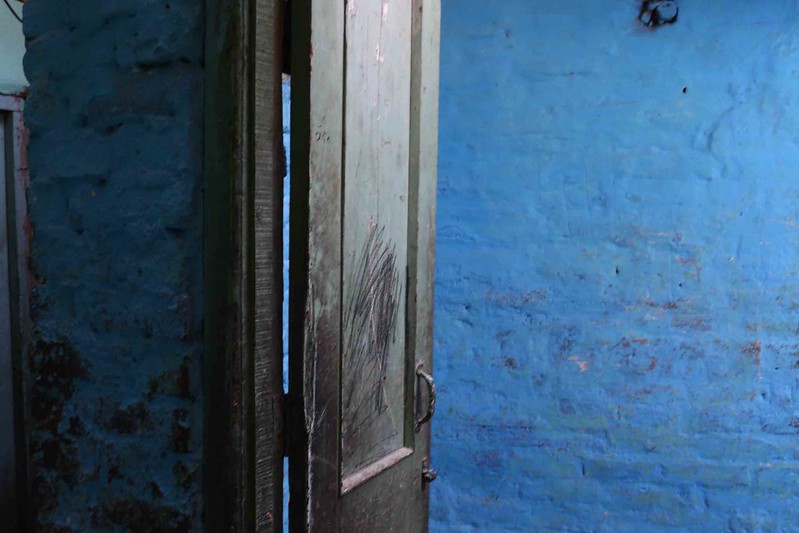 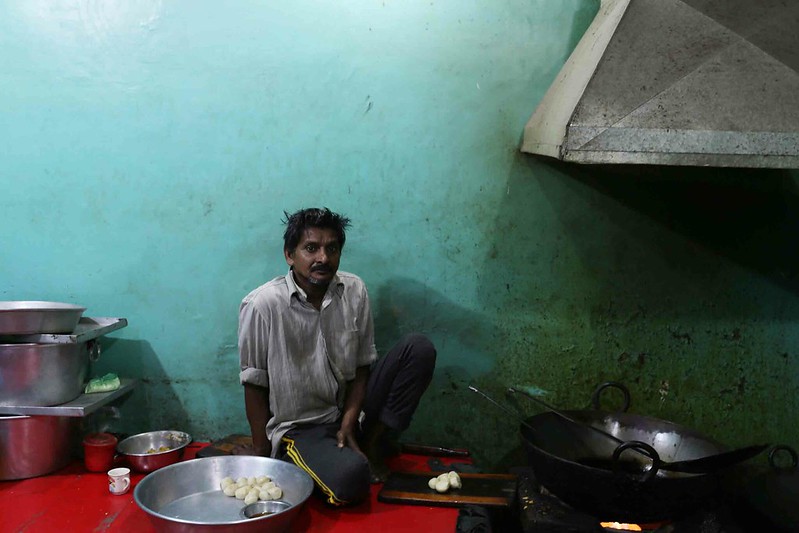 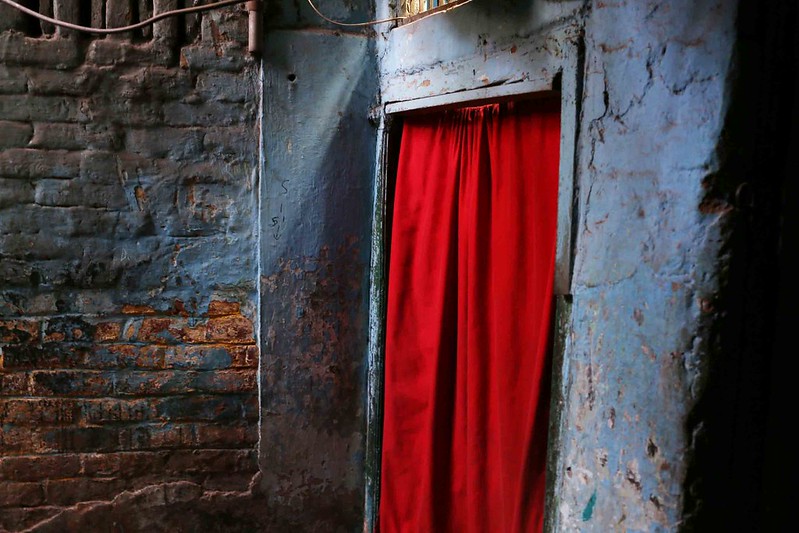 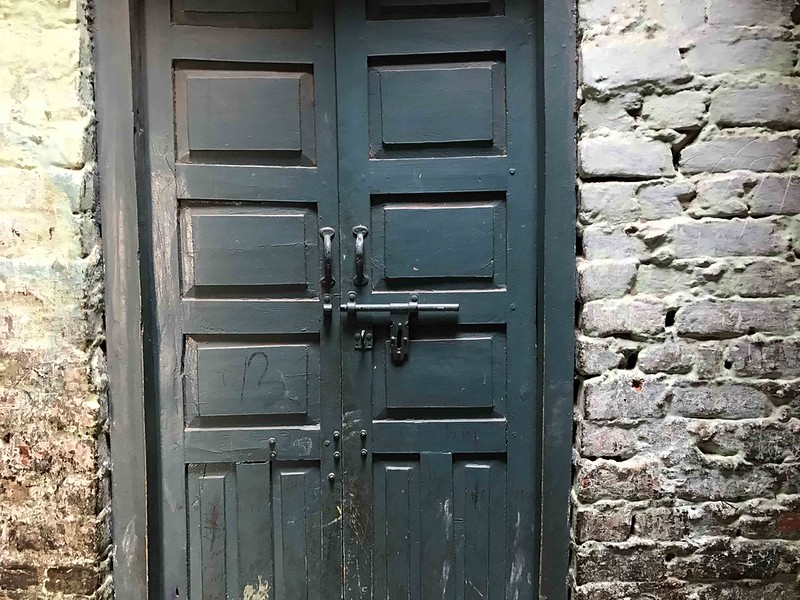 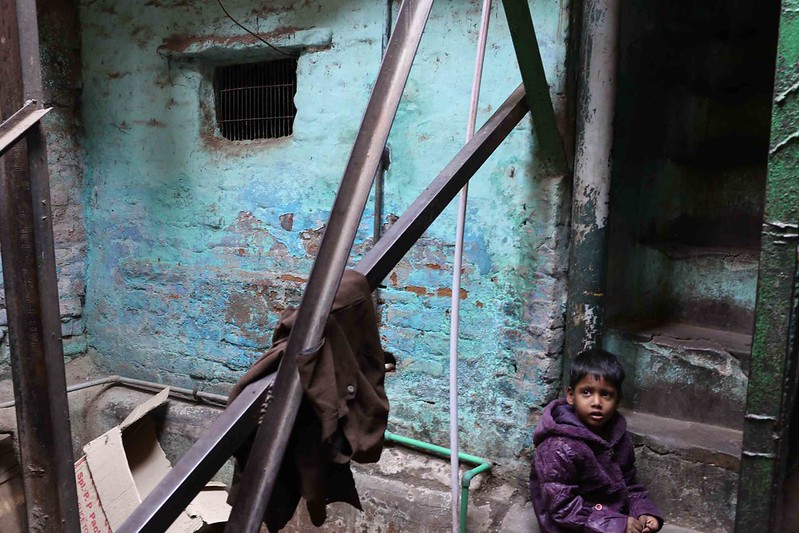 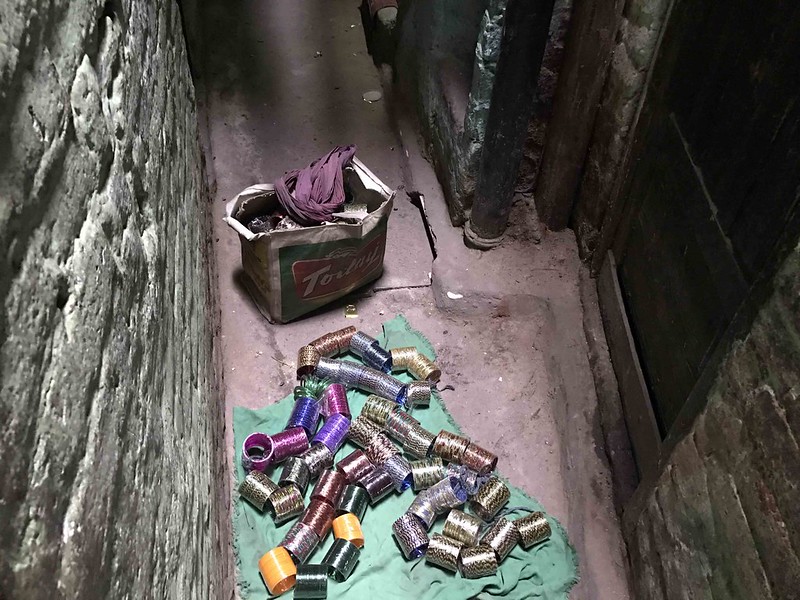 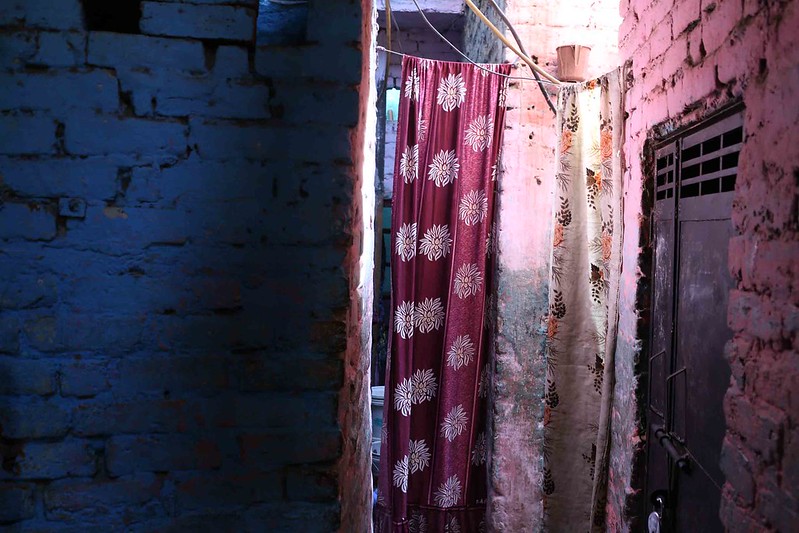 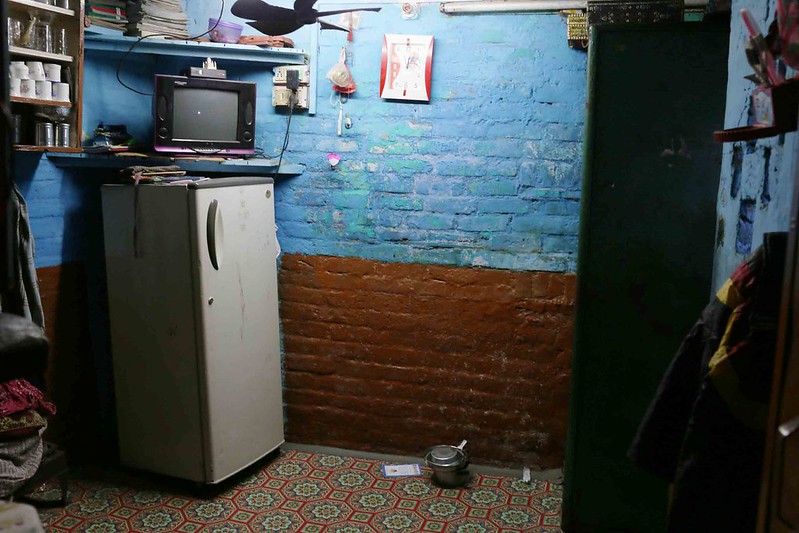 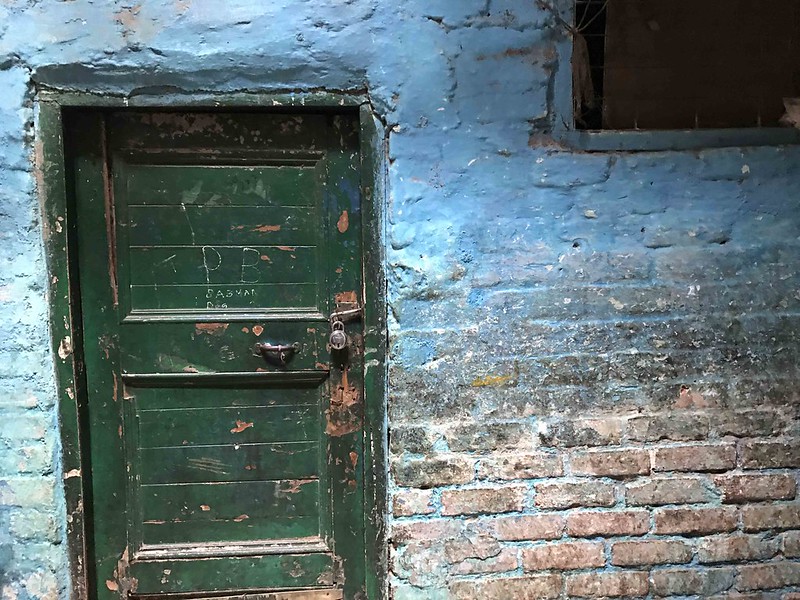 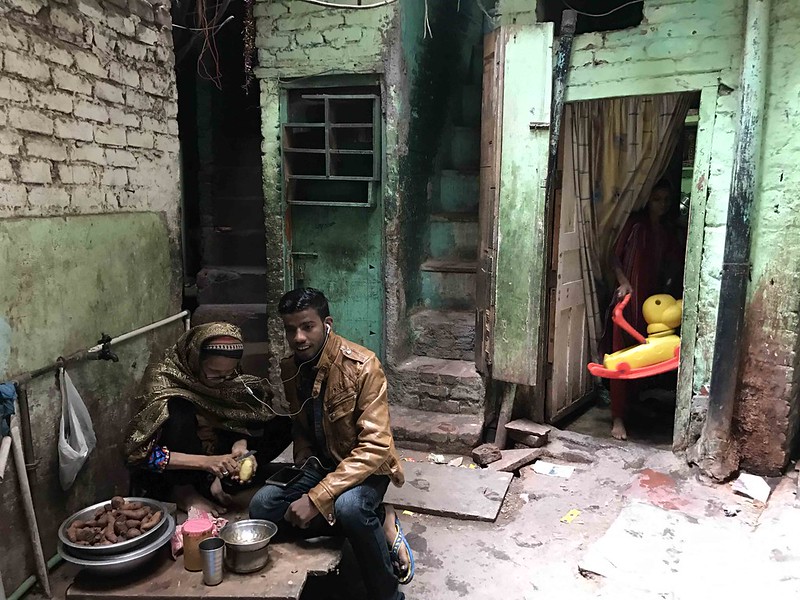 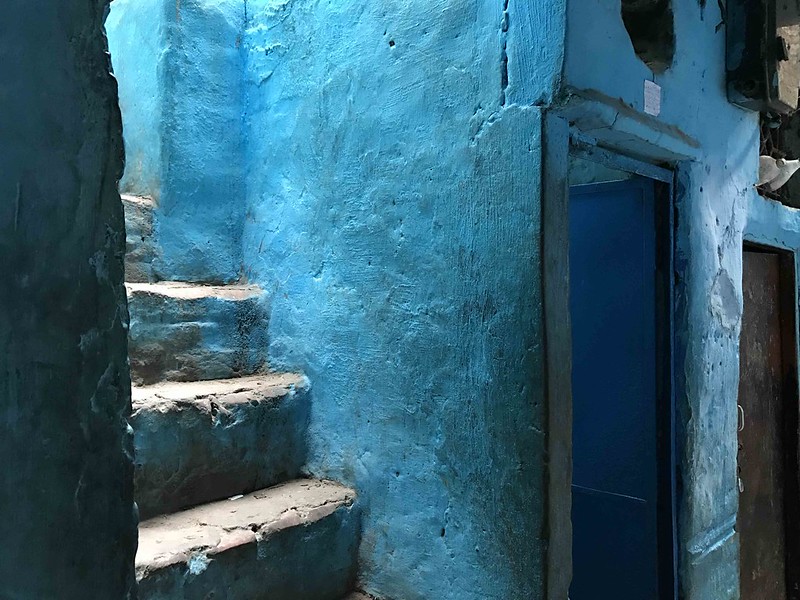 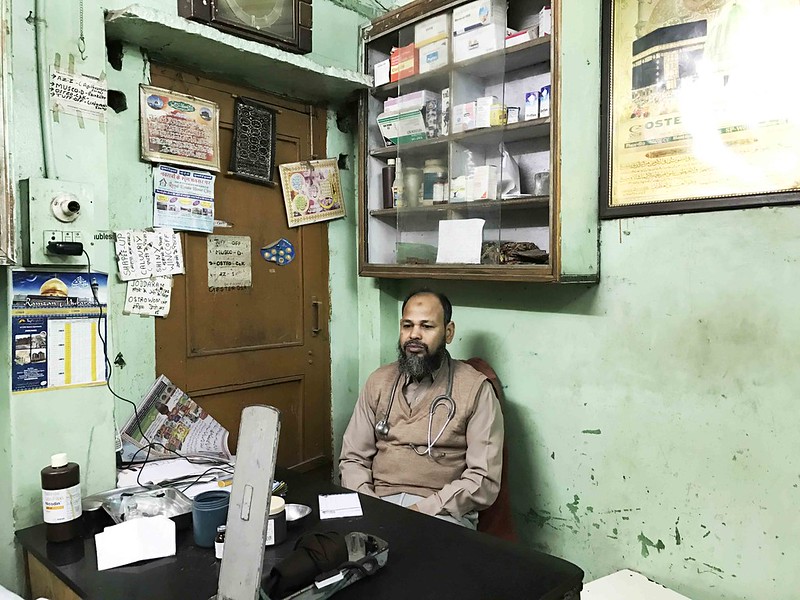 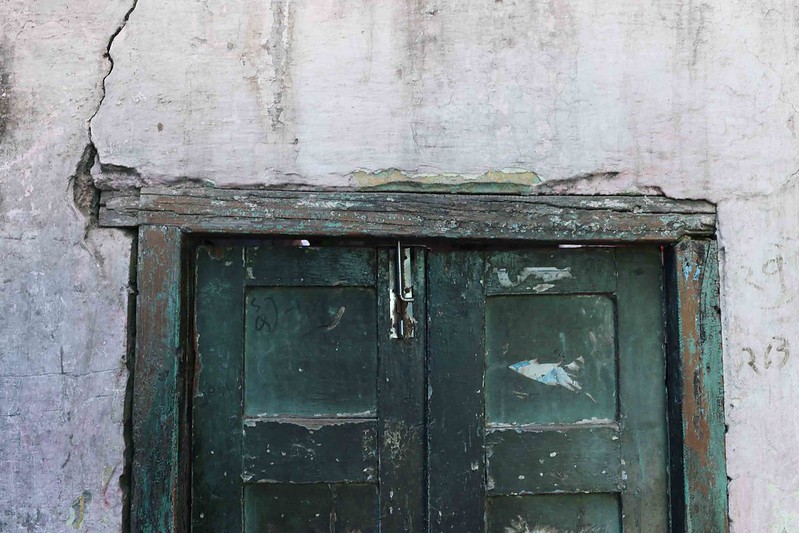 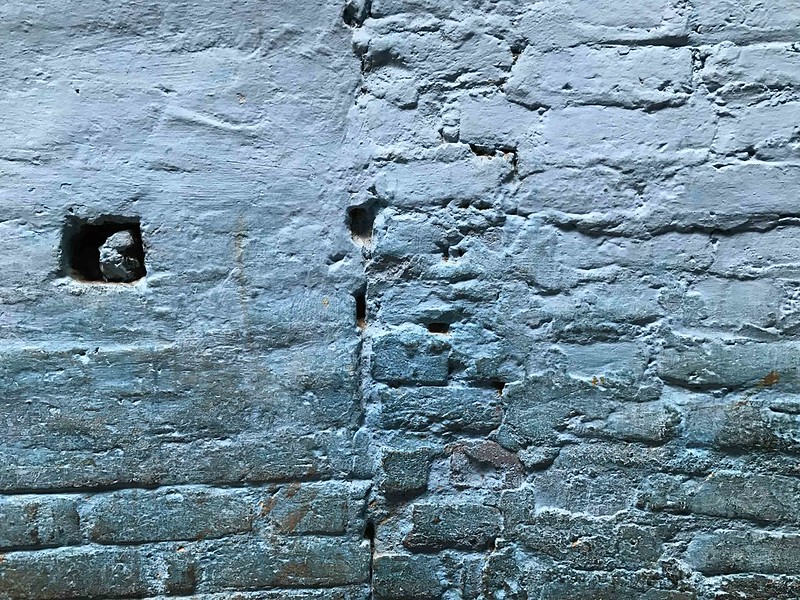 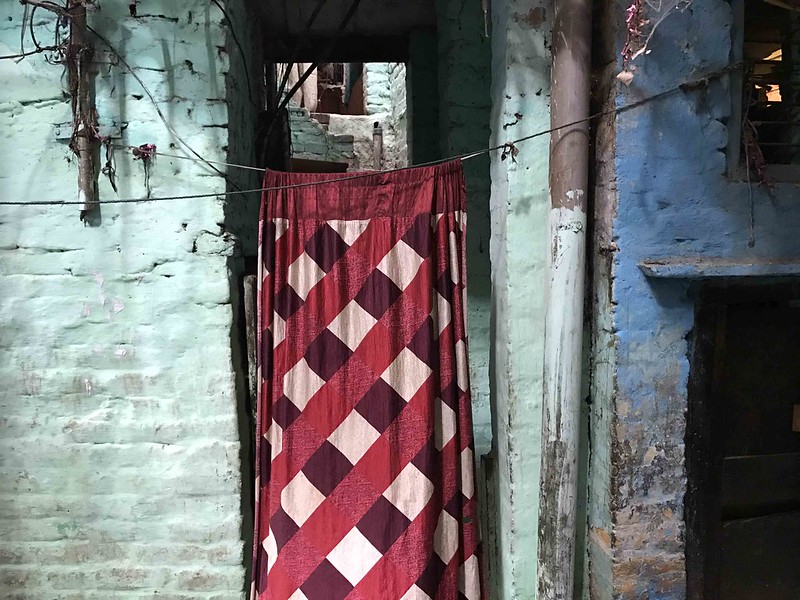 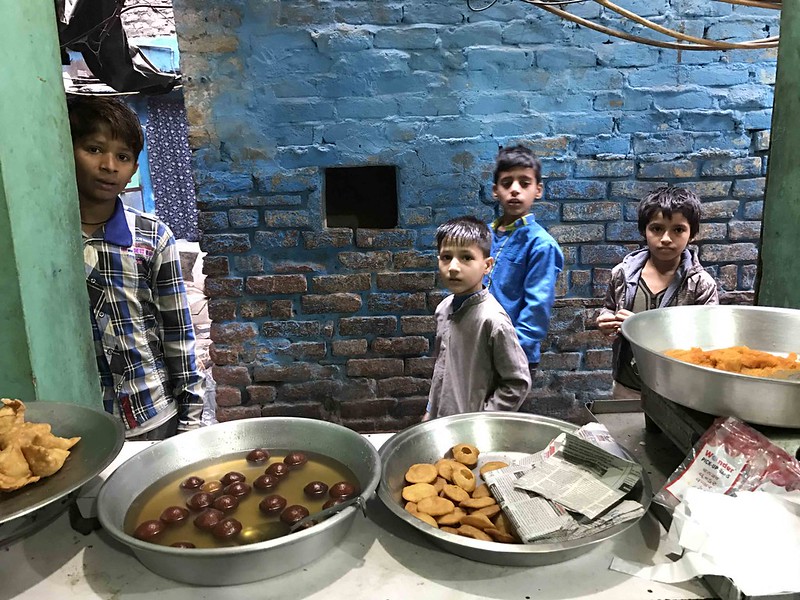 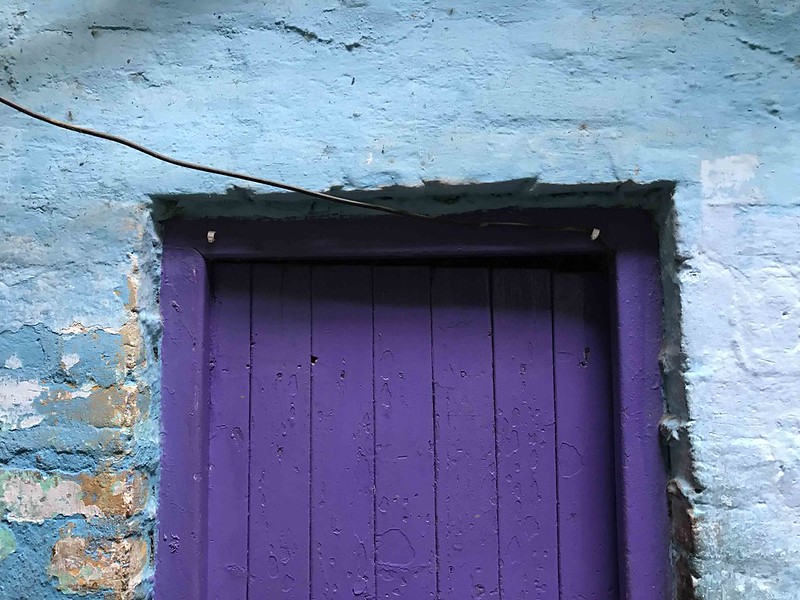 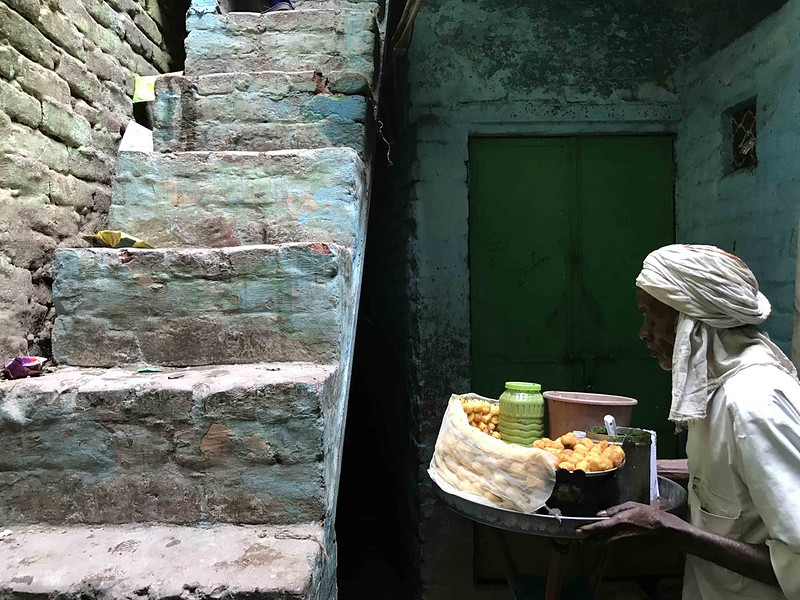 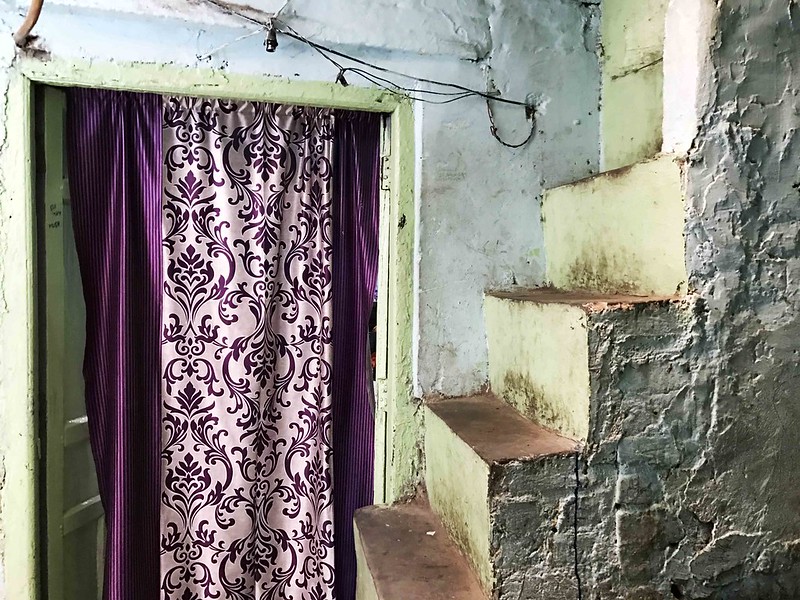 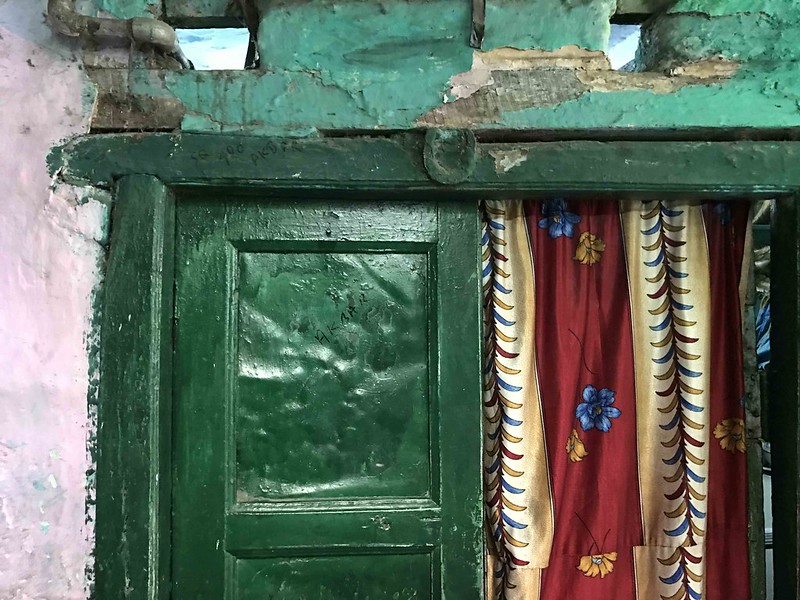 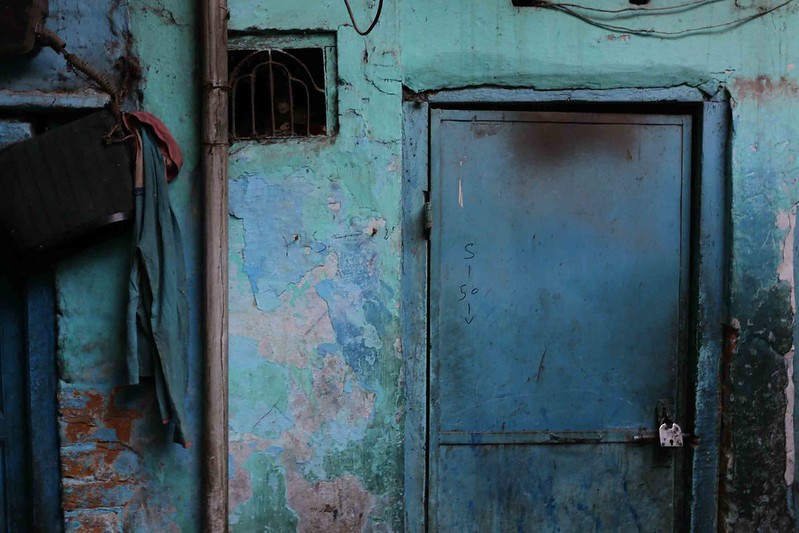 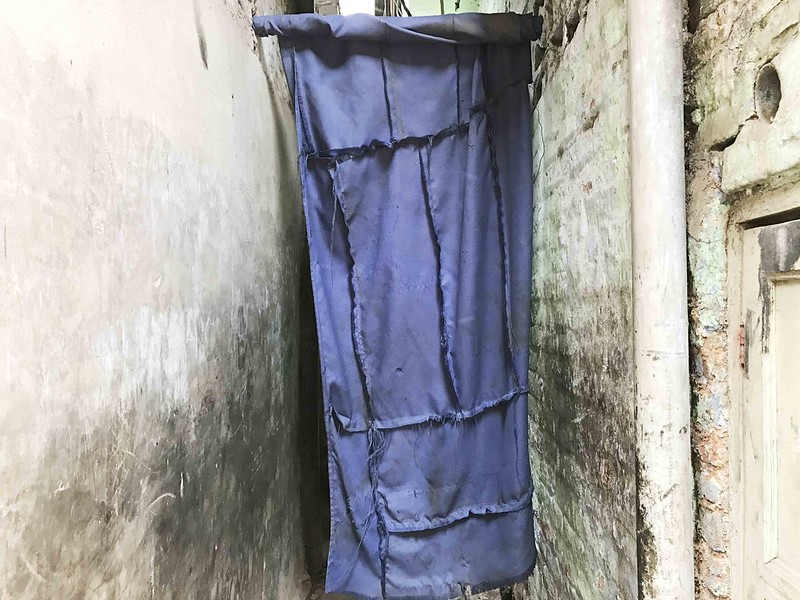 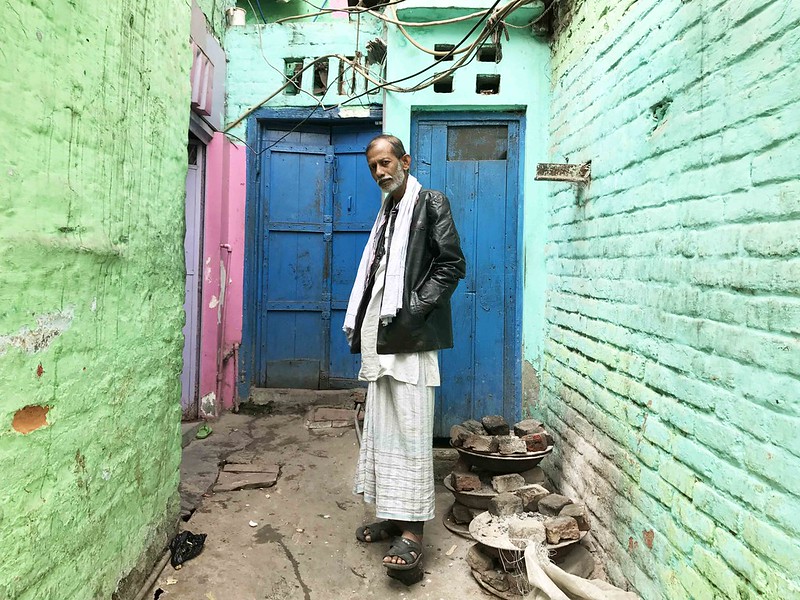 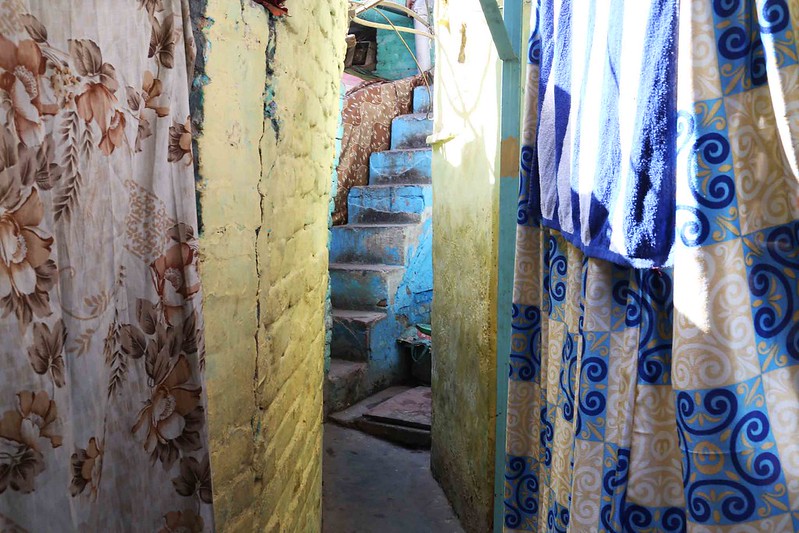