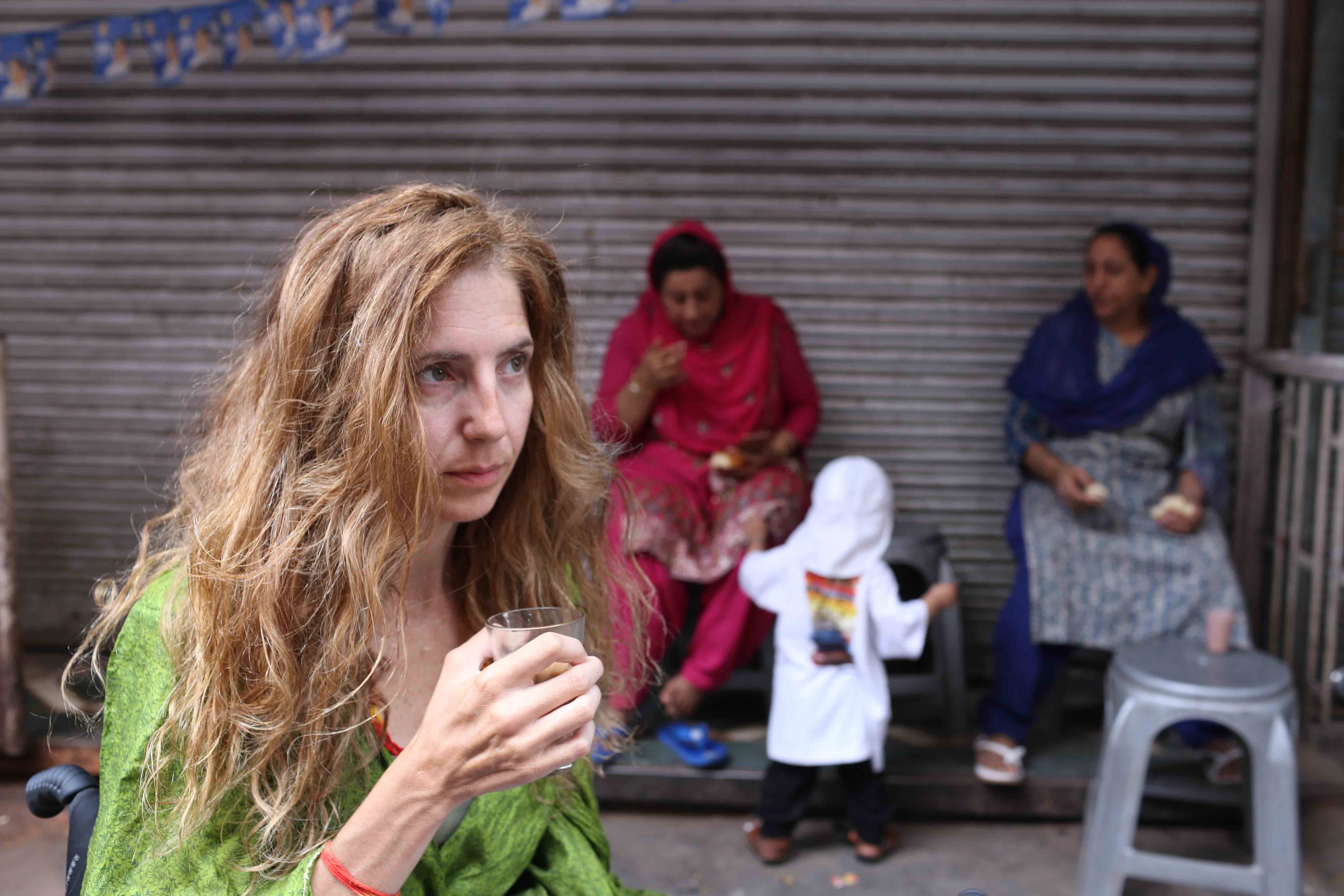 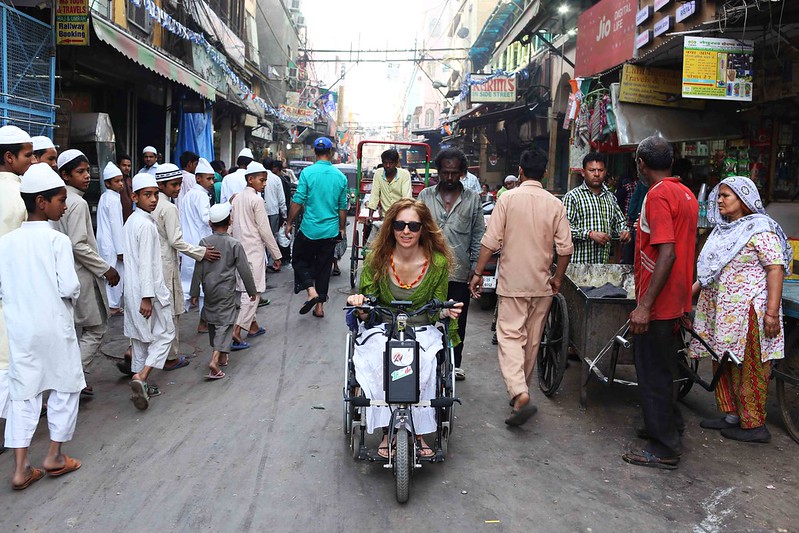 Most foreign tourists experience their fleeting glimpse of Old Delhi from behind the dust-free glass of their air-conditioned bus windows, with the bus circling the main avenue around the grand Jama Masjid.

The Delhi Walla doesn’t grudge them. After all, even Old Delhi dwellers find it tough to navigate through their impossibly crowded streets. You don’t only have to dodge the hundreds of people squeezed up in the narrow alleys, but have to be also careful of not stepping upon dogs, cats, discarded meat pieces, and dead rats. (I shall remain silent on the culture of spitting.)

So, it was with some wonder when one morning I spotted a foreign woman entering the Walled City through the Mughal-era gateway. She was on a wheel chair.

And this is a city where the best parts are woefully inadequate to people with wheel chairs.

But Simona Anedda says she is doing fine, thank you very much. She is accompanied by her niece, Gloria, who helps her in the practical difficulties of daily excursions.

Four years ago, Ms Anedda was diagnosed with multiple sclerosis by doctors in her home town Rome, Italy. The auto-immune disorder affects the brain and spinal cord resulting in the breakdown of limb movements, among other symptoms. In her early 40s, Ms Anedda is travelling despite that.

The rickshaw pullers are openly gawking at her as she crosses the busy road to enter the Old Quarter. I tell her that it is a custom in this part of my city to stare uninhibitedly at anyone or anything unfamiliar.

“Yoohoo, I’m an alien,” the woman exclaims with a laugh.

Ms Anedda, who used to work as a freelance tour leader, herself appears to be well-known in her country – I learn later when I ‘Googled’ her and found her the subject of a story in the Italian edition of Vanity Fair. Her disease is incurable, she says, and before it becomes more difficult for her to move around, she wanted to realize her dream of seeing India.

At the moment, Gloria is walking ahead with a camera, while Ms Anedda is independently making her way. Now she speeds up her automated wheel chair, now she slows down. A young man walks past her, exclaiming (in English), “Awesome!”

The street is not crowded at this hour and passersby are instinctively making way for Ms Anedda. A smiling sweeper gently greets her with a namaste.

Our tourist stops beside an anonymous grave in front of Tabish Medical Store and looks marvelously at it. Ms Anedda is particularly fascinated by the area’s wild life. She pats a horse, utters sweet nothings at two puppies, and sends a flying kiss to a goat, saying, “The goat’s not changing into my prince! The fairy tale’s not true!”

Ms Anedda arrived in India in January. She has already visited Kerala, Bangalore, Mysore, Benares, Jaipur, Pushkar and Agra. “People helped me everywhere… even in the trains.”

She talks of the day in Pushkar, Rajasthan, when she desperately wanted to enter the famous Brahma temple but was crushed to know that wheelchairs weren’t allowed in. A young man then gathered his friends and carried her into the temple in a plastic chair.

The only place in India where Ms Anedda felt miserable was in the country’s greatest tourist landmark – Taj Mahal in Agra.

“At the ticket counter, they did not tell me that wheel chairs aren’t allowed inside the main monument… I asked the security persons there if they could help carry me inside but they instead told me to walk by myself.”

It was the first and the only time, so far, that Ms Anedda cried during this dream trip.

We are nearing Chitli Qabar Chowk. Ms Anedda stops in front of a homeless man sitting on the pavement. He seems to be sleeping. Ms Anedda goes past him and stops by a fish cart. At times, she tries to take pictures from her smartphone but finds it difficult to hold it for a long time.

The street is gradually starting to get crowded. More and more people are staring at Ms Anedda. She stops at a pavement tea stall in Matia Mahal Bazaar.

Her niece, Gloria, takes out a cigarette and she, too, becomes an object of curiosity.

A few minutes later Ms Anedda comes face to face with the grand Jama Masjid. She silently stares at the red sandstone edifice.

“I have no faith… I don’t believe in any religion,” she tells us. “But I always dreamed of India because people pray here… and I have met a lot of people here who told me they would pray for me too. That makes me feel good.”

At this point, we part our ways. Ms Anedda and her niece continue with their walk, intending to go as far as the spice market.

I keep watching the two women until they disappear behind the west side of Jama Masjid.

[This is the 130th portrait of Mission Delhi project] 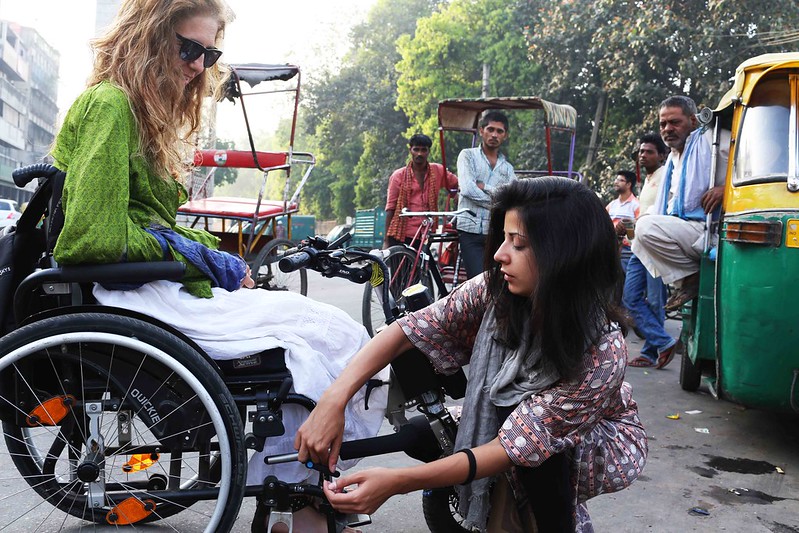 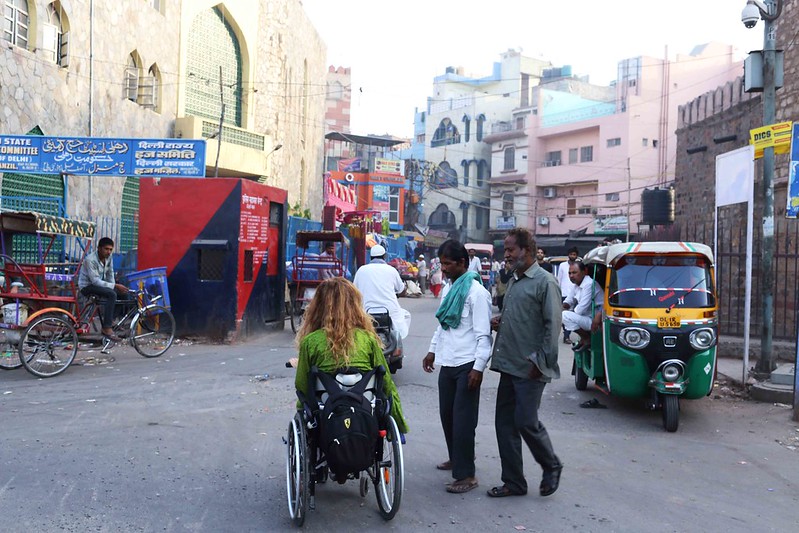 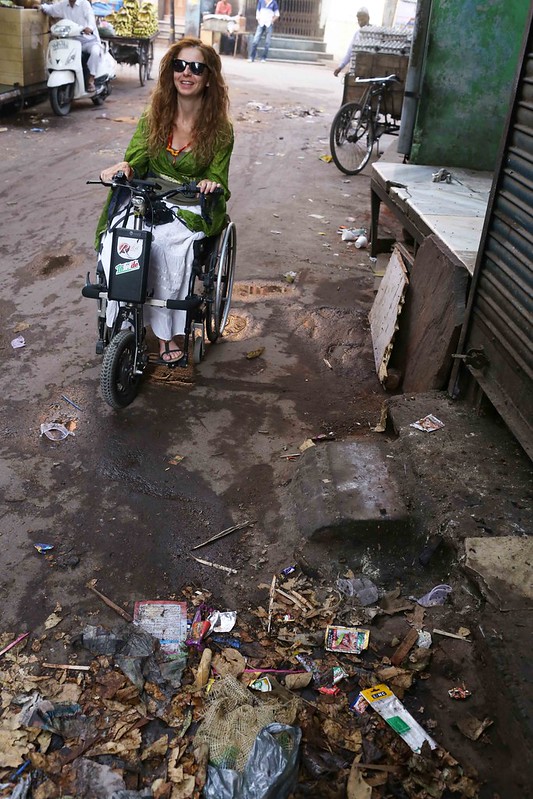 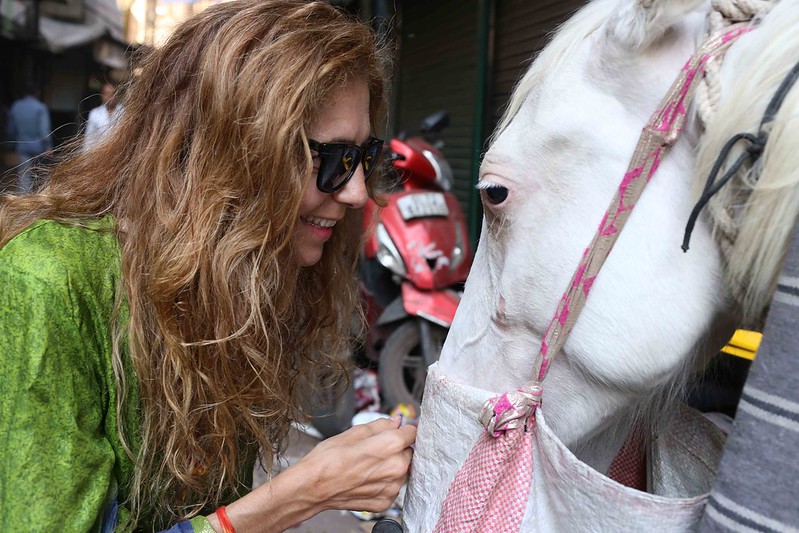 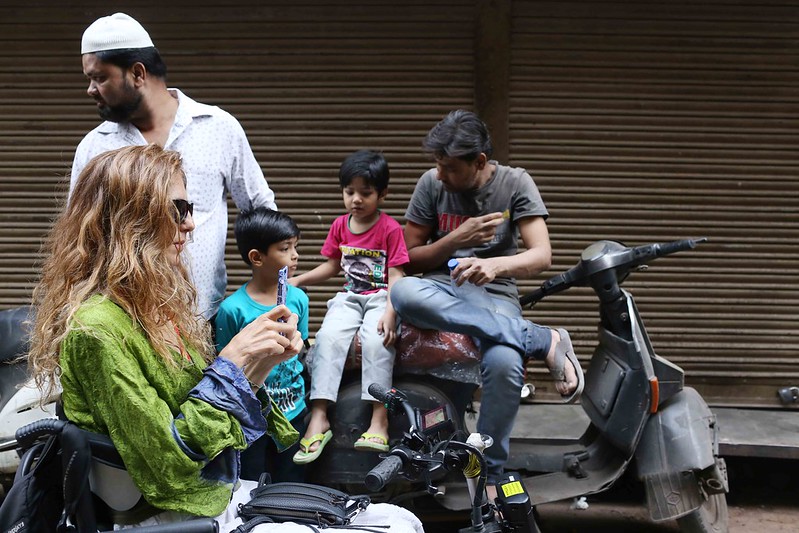 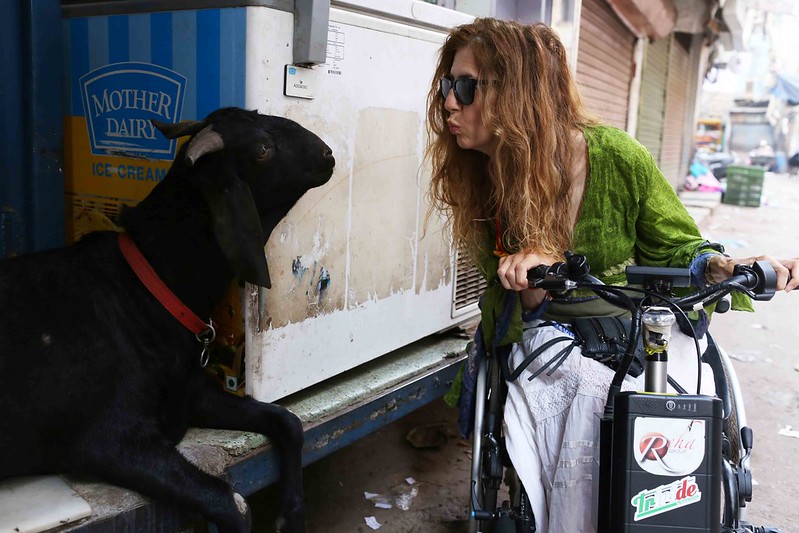 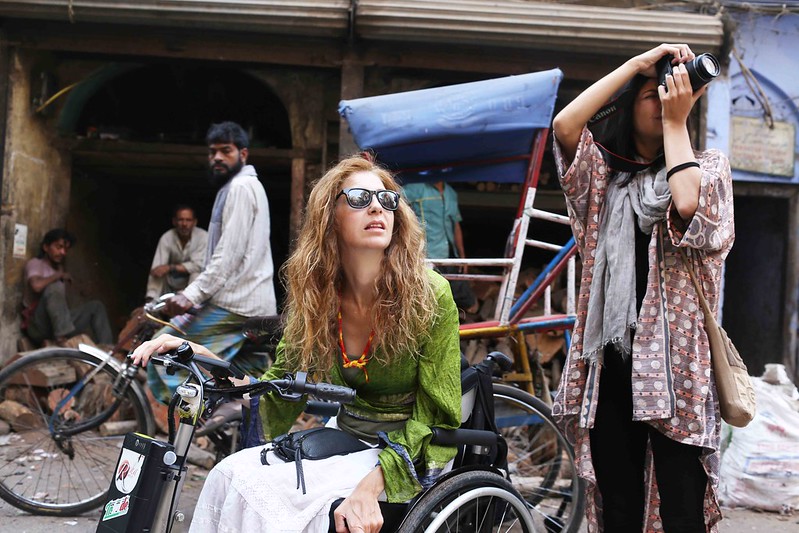 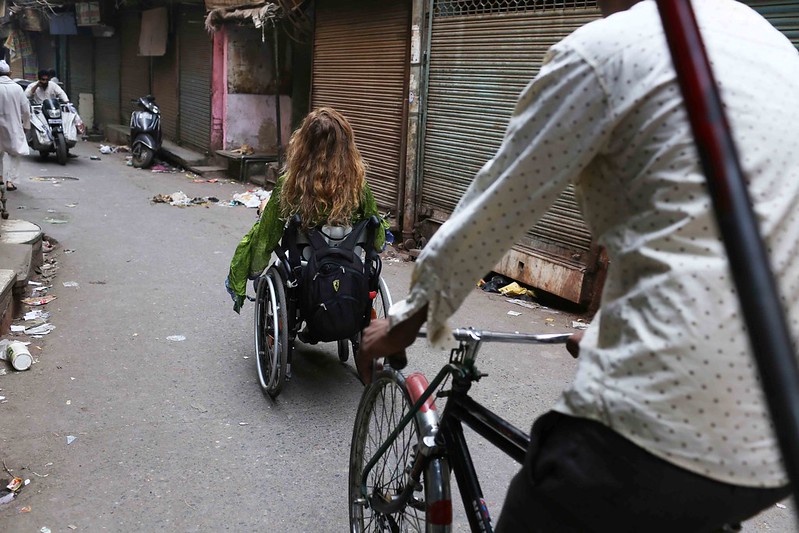 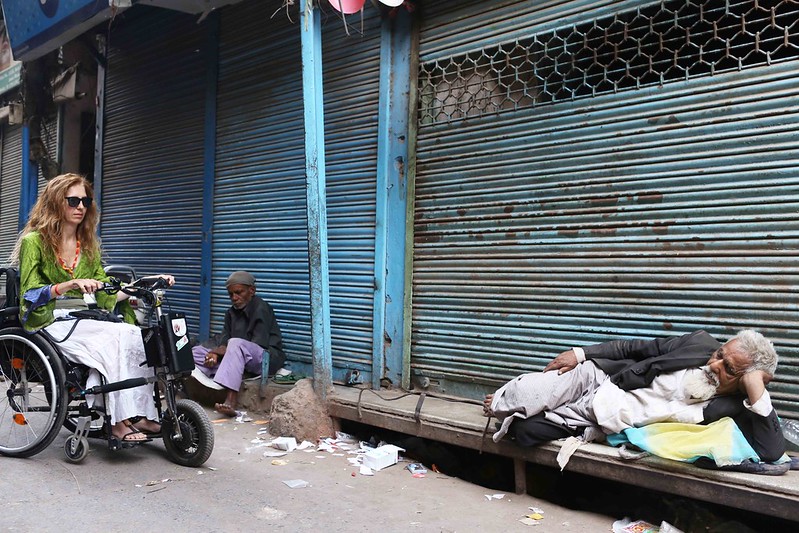 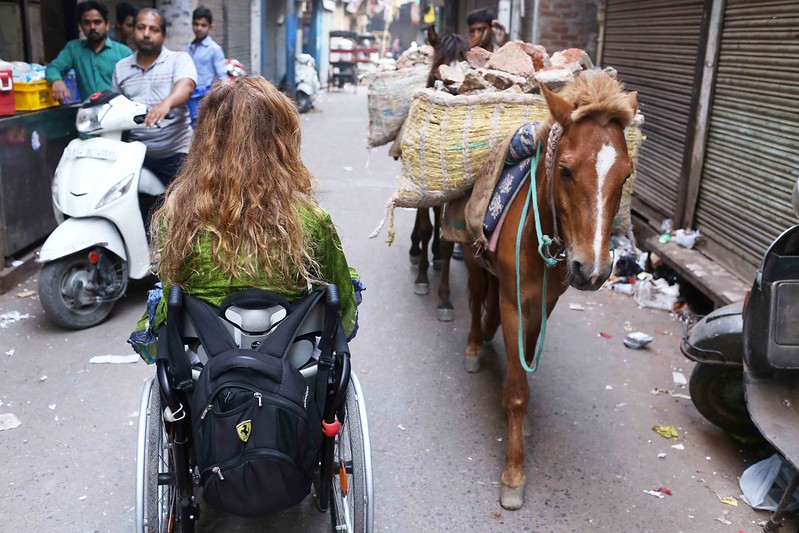 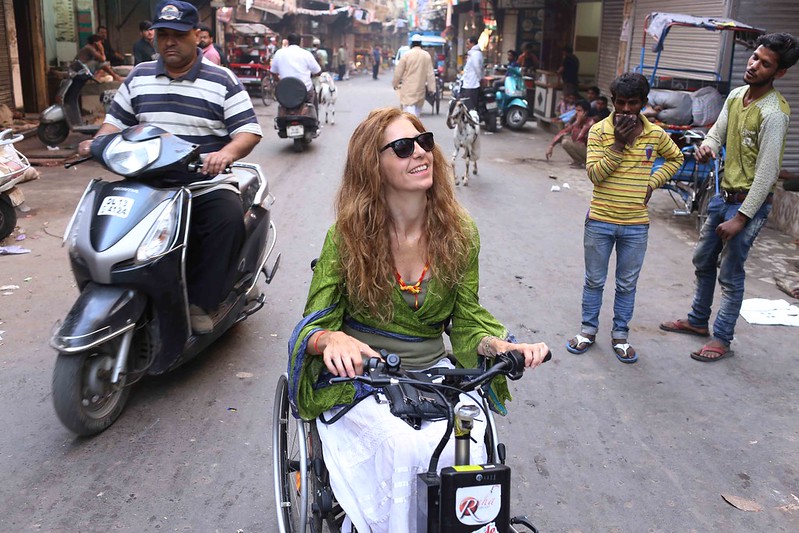 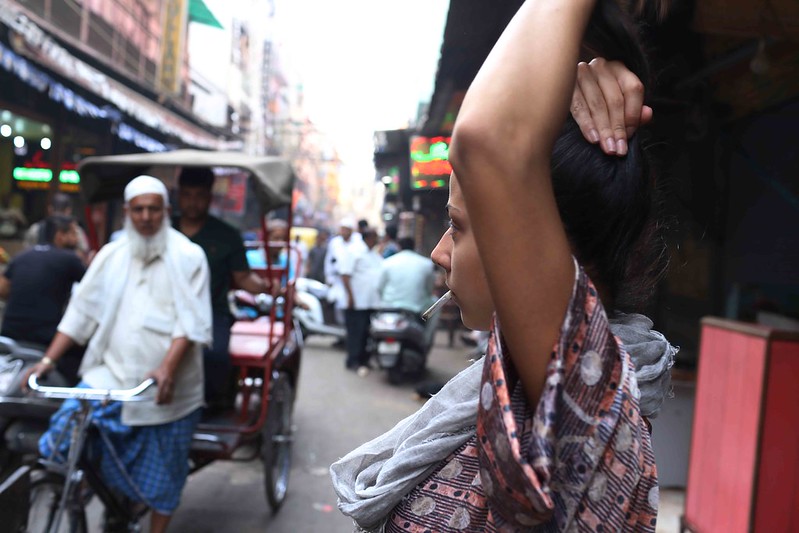 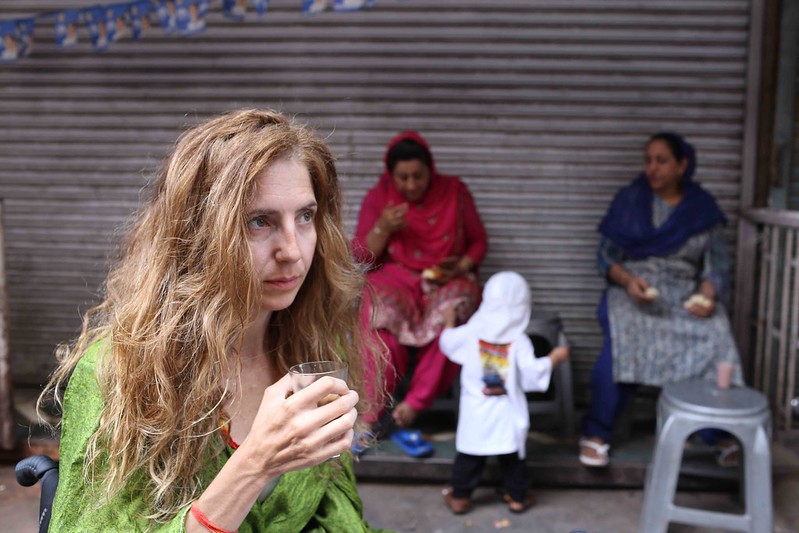 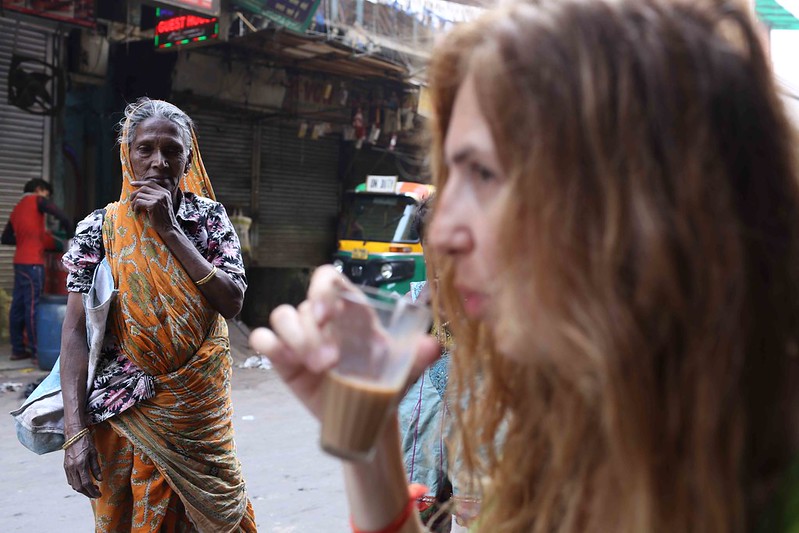 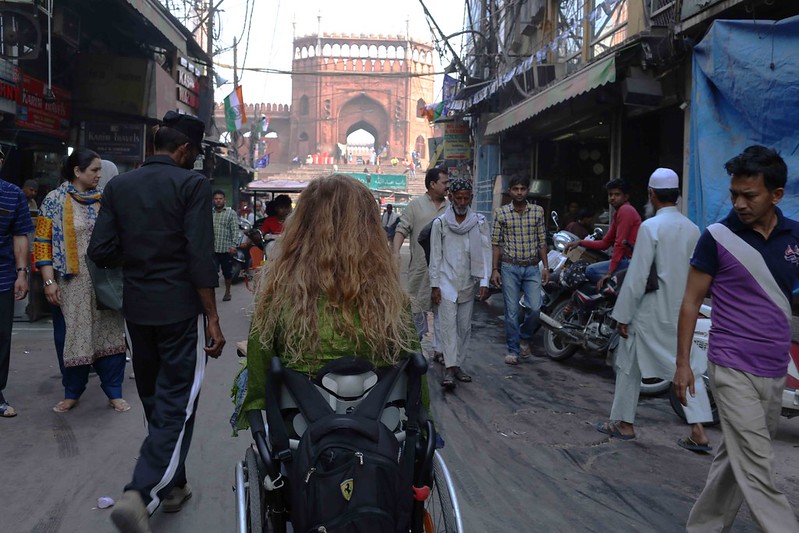 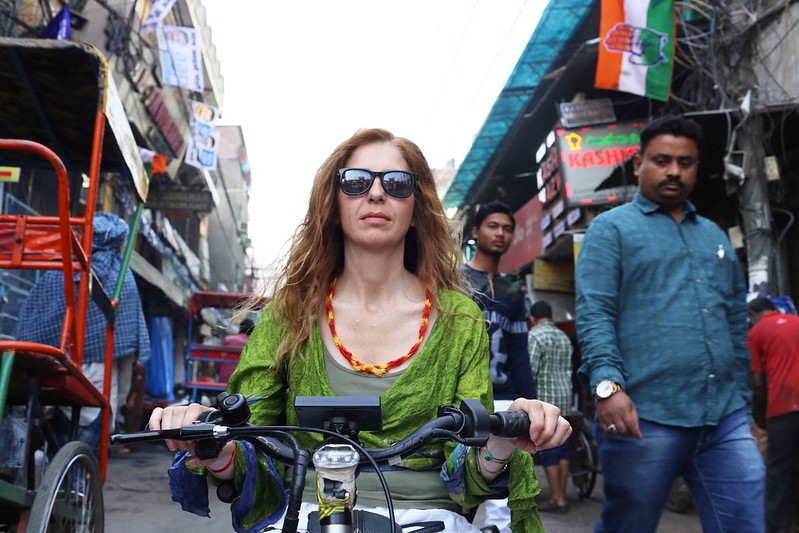 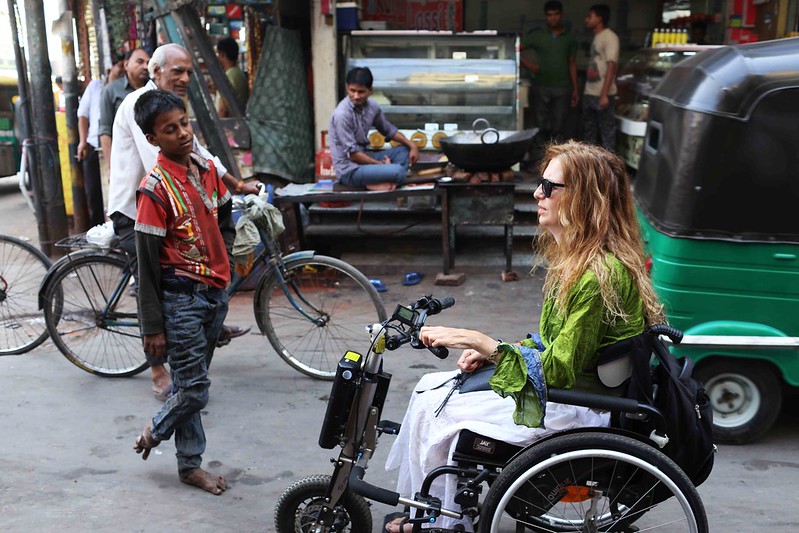