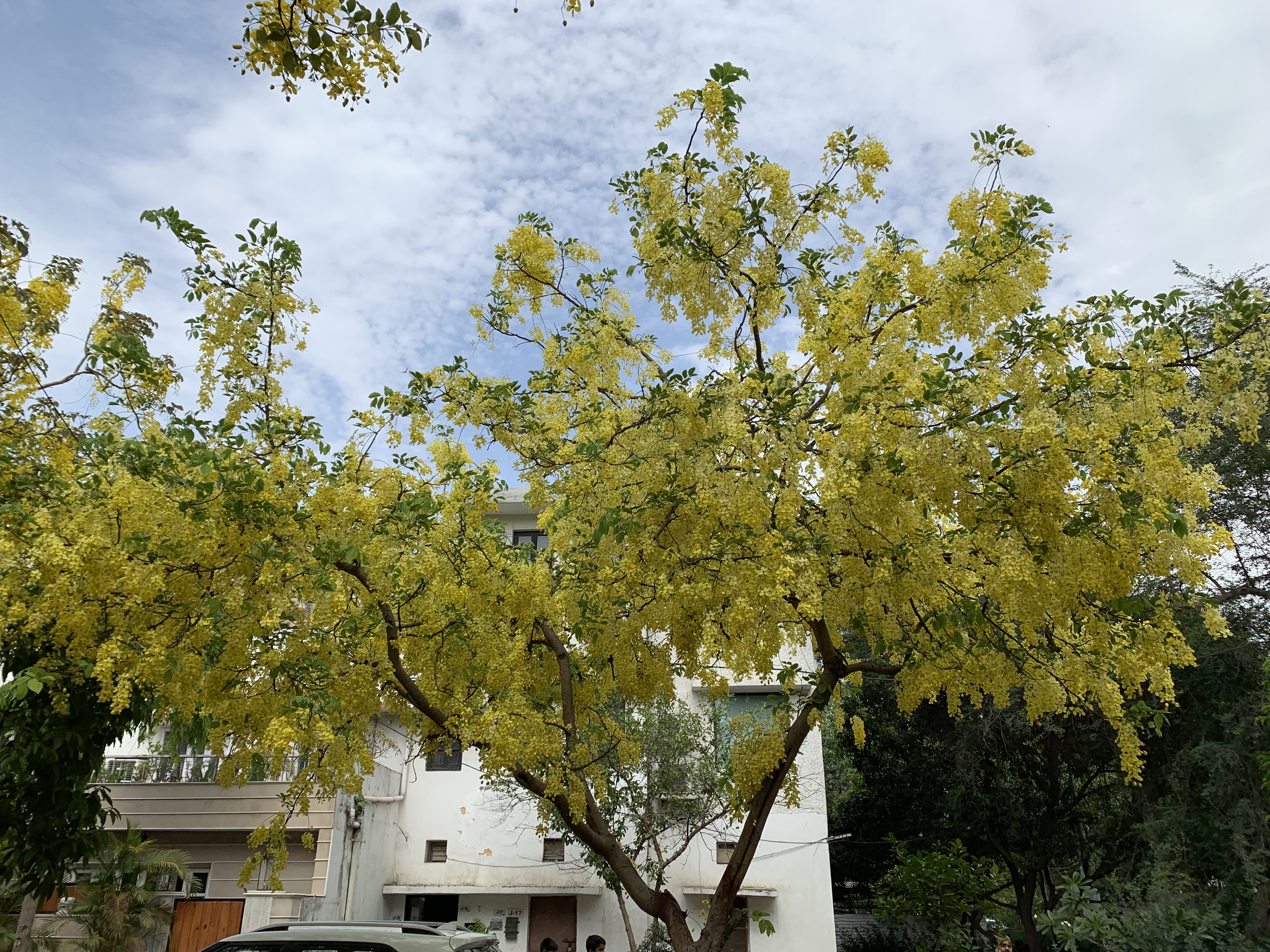 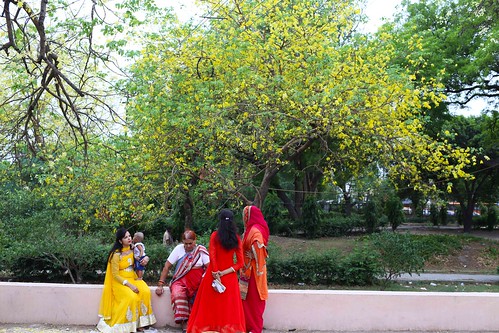 We are sailing through midsummer. Amaltas trees, aka Indian Laburnum, are blooming across Delhi. The most beautiful places to view the fragrant golden-yellow flowers are: Amrita Shergil Marg, BK Dutt Colony Park, Hailey Road, Bungalow Road, Buddha Garden, and many other places. Whichever spot you head to, enjoy the sighting of these glorious trees, and don’t forget to carry this flap with you. It has poems on Amaltas composed by Delhiwales in love with the tree’s summertime bloom–except for one of the poets who wishes to remain anonymous. Some of these verse-writers live in Delhi, while others have moved out of the city, but they all confirm that the memories of Delhi’s Amaltas are still living in them, especially at this time of the year. 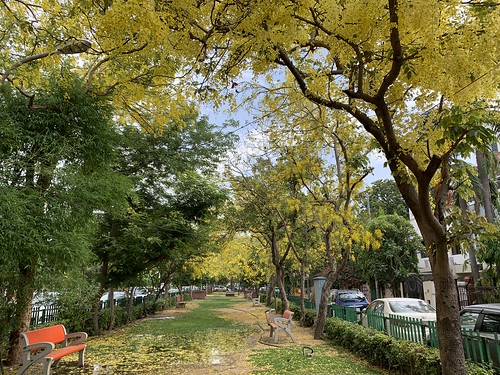 I hate the wretched amaltas
Want to crush them ‘neath my Adidas;
Only some idiot fashionistas
Care for those filthy vistas.
Use them to shroud corpses of gangstas
Who acres jots, titles, or iotas,
About some fallen amaltas?
[By Anonymous in South Extension] 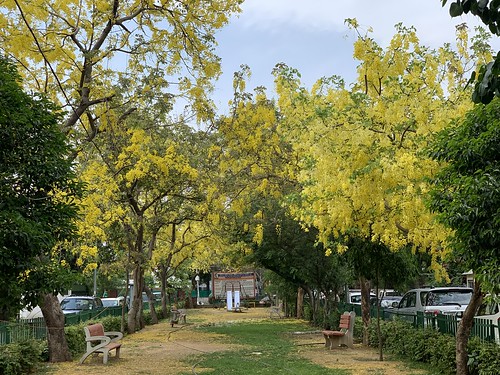 every May summer drips on the walls of a crumbling Delhi ruin
like a ghazal, time stands still amidst the alchemy of flowers,
I trace memories in the light lattices that sieve through its branches,
dust has settled under the delicate, yellow inflorescence,
love letters to lost lovers in forgotten cities,
even the usually raucous crows have quietly retreated
into the shady depths of nearby Neem trees,
beyond the green shimmer of haze I daydream, my eyes open,
a soft breeze takes me to another summer, distant,
like a flaneur I amble through somnolent stretches of time,
the yellow heat rising mirage-like from the asphalt – nostalgia
in thinking of Lutyen’s Delhi there is more to it that lingers on
memories of other times I can’t forget
[By poet and blogger Tikulli Dogra in Vaishali, Ghaziabad] 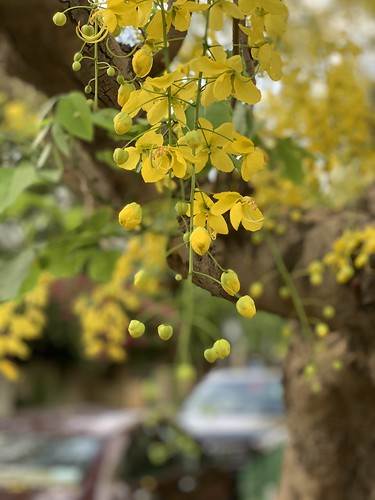 The amaltas bloom,
Yellow and full and proud and brilliant,
Little chandeliers shining bright,
Staring down at me with smug, smug smiles
Of a child flaunting their brand new toys,
While I stand under the majesty
Awed, mesmerised, staring,
Wind in my hair,
The velvety petals caressing my cheeks,
Whispering scandalous secrets in my ears
(And perhaps, telling me to shut my gaping mouth).
I still stand still, stunned, smiling goofily,
Blatantly ignoring the passers-by,
On my toes, arms outstretched,
Trying to embrace the lowest branch,
An old lover, long lost and suddenly found,
But alas, only the green buds greet me with
Gap-toothed smiles and sympathy,
Divulging the stories of all summers
And summer loves they have witnessed,
Bloom and wither.
[By literature student Parul Sharma in Maitreyi College, Delhi University] 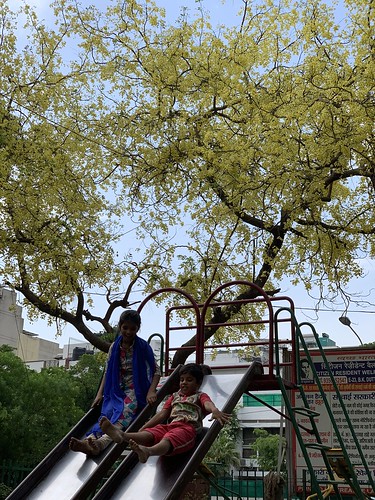 Every year in May, I write this verse 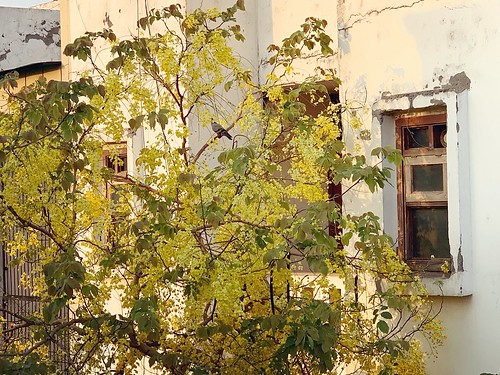 Spring is for the Jacaranda
in purple, woken up cold
For the Flame-of-the-forest
in red, in its loosening hold.
When you let go of me, I saw
your coral fingers uncurl in
the petal of a Tiger’s Claw.
Summer is for the Gulmohar
in orange, too hurt to calm
For the unkempt Bougainvillea
in colours of unloved charm.
But the season of defeat for
the Amaltas heart is in yellow.
I succumb, become laburnumb.
[By academic Annanya Dasgupta in Chennai] 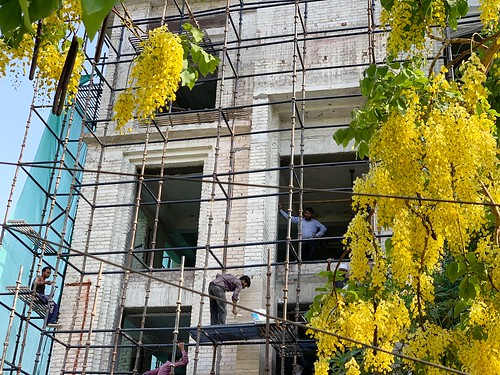 For Chaucer, TSE, and Annanya: An Amaltas Poem

Summer without the heat: just sunshine and glory
Every bunch dripping with molten gold, chandeliers
Lighting a delirious dance in some glad apsara’s story
I’ve read of many Aprils now, cruelest of months
Or sweetest, depending on your poet. My ears
Have become tuned to its many songs, a daily
Epiphany, you might say, when each small, mundane
Thing beckons you to its lay. April is the Amaltas month
Each poem an exploding bloom of the secrets of the day.
[By university scholar Giti Chandra in Reykjavik] 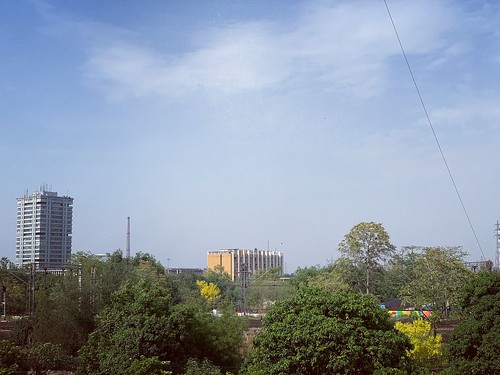 I feel like a wilted rose trying to be Amaltas.
[By Sustainable Finance Specialist Neha Kumar in Vasant Kunj] 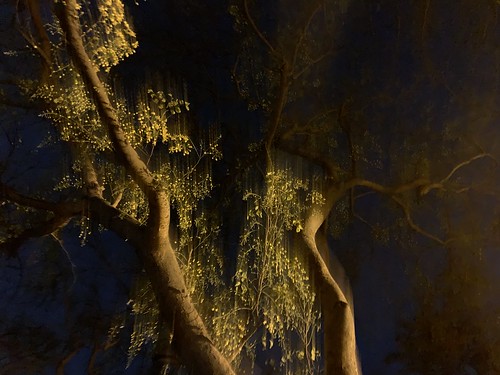 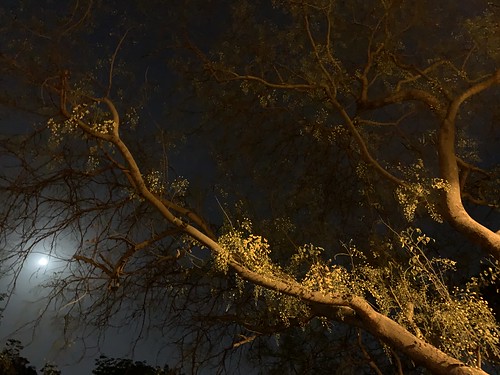 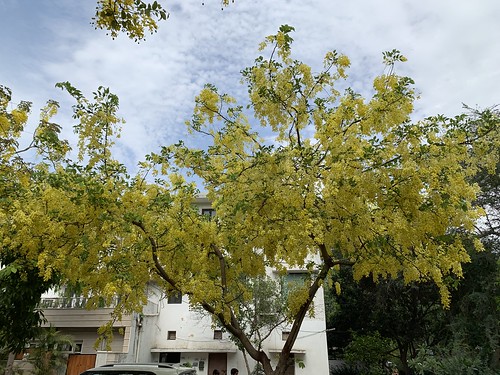