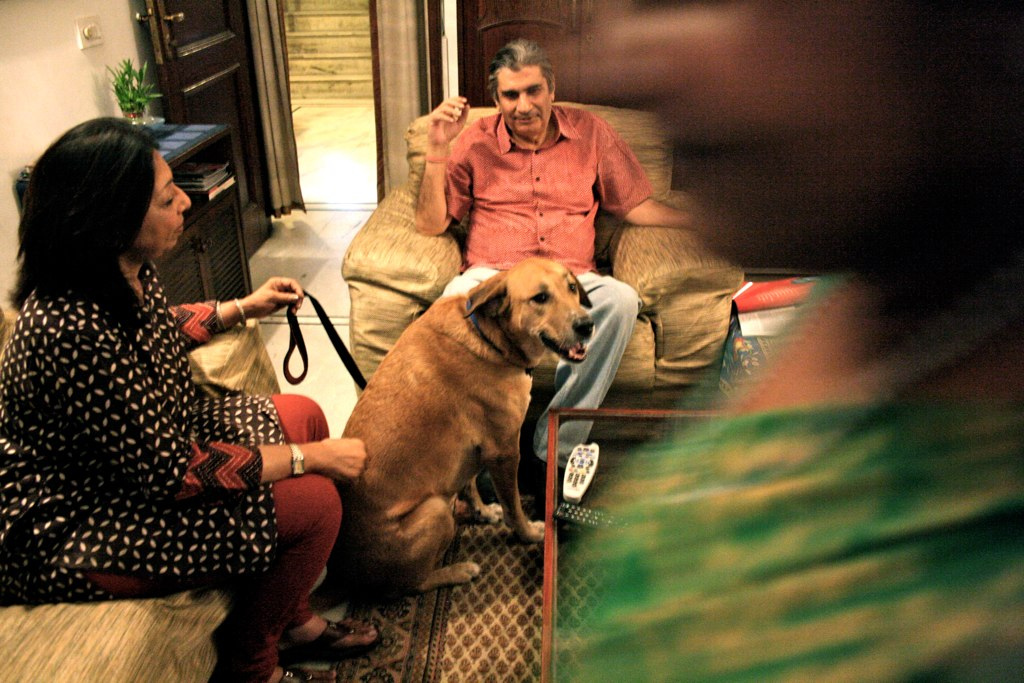 He doesn’t talk much. The Delhi Walla is with Editor, a spoilt south Delhi brat with a weakness for Parmesan cheese and chocolate chip cookies. A resident of Nizamuddin East, an up-market neighbourhood dotted with gardens and ruins, Editor owns ‘a nice collar, a nice leash and a serviceable winter coat.’

He also owns two pets—Sumita and her husband, Vinod Mehta. As the editor of Outlook, an influential Indian newsweekly, Mr Mehta often puts in a nugget or two on Editor in Delhi Diary, the popular column on the magazine’s last page. That explains the exposure of a family secret — all three share the same bedroom. Editor snores on the sofa; the Mehtas on the double bed. However, unlike other pampered Nizamuddin East pets, Editor is not pedigreed. Around seven years ago, he was found shivering in a ditch in Gurgaon.

I enter the apartment of the Mehtas in the evening. Mr Mehta is away at his office in Safdarjang Enclave, while Editor is having his siesta in a small book-lined room that looks like a study. ‘A friend gave him to us,’ says Mrs Mehta as she kisses Editor on his lips, pats him and calls him sweet names like Eddie and Ed.

But why this name Editor? ‘Because like most editors he is willful, stubborn and thinks he knows everything’ — so had said Mr Mehta in one of his diary entries.

Like others, Editor must have his outings. In the evening, a lady called Chanda joins him for a walk. If Mr Mehta is home early, he goes instead. Once he reported in Delhi Diary: ‘The other day I was taking Ed for his evening walk when I heard someone shouting behind my back, ‘Editor, Editor!’ I thought the gentleman had some important work with me or perhaps wanted to say nice things about the diary I wrote. When I rushed to him, he said nonchalantly, “Sorry, I was not calling you, but your dog!” ’

I follow Ms Chanda as she takes out Editor for a walk. As he lifts his leg against a pilkhan tree, she says, ‘Both Saheb and Memsaheb love Editor more than parents would love their child.’

‘A woolly-headed liberal’ in his own words, Mr Mehta goes all mushy-gooey on sighting anything canine and homeless. There are at least five dogs hanging around his apartment complex, all said to be fed daily by him with milk and bread, ‘chewies’ and biscuits. The chowkidar identify three by name—Bhola, Daisy and Kalu.

Once Mr Mehta wrote:
“Besides our very own Editor, at last count I was feeding a dozen stray dogs. Three or four at the office and the rest in the colony. Bhola and Daisy live in our lane and have first claim on our affection in the shape of food and medical care. In the side lane, we have five or six who we also feed. A fortnight ago, one of the bitches produced a litter and now we have to look after an extra four puppies whose appetite is huge. The black pups are absolutely adorable and I am very tempted to pick up one and bring him/her up. Editor’s permission, naturally, is mandatory; however, there is another problem. My wife and I feel it would be cruel and unfair to adopt one and leave the rest.”

No sooner do we reach a few ruins, not far from Mr Mehta’s home, Bhola comes running, and start licking Editor who licks him back.

Are they gay? “I’m not sure,” says Ms Chanda. “Saheb got operation done on both of them. “

This must have restrained Editor’s basic instincts but his baser emotions are worsening. “He’s very stubborn,” Ms Chanda says. “He is steadily growing middle-aged, lazy and grumpy,” Mr Mehta once observed. Editor has bitten off a few people. “He often attacks those who look like beggars, or rag pickers, or some such poor people.” This categorization would bring no smile to those who admire the Outlook editor’s engaging writing, as well his slightly left-of-center beliefs.

Mr Mehta is infamous among the right-leaning readers owing to his self-confessed ‘pseudo-secularist’ status. He is accused of being a Congress party sycophant, a lover of Muslims, and a professional peacenick for India-Pakistan friendship. Sample this reader’s response to a Delhi Diary entry on how Editor chewed up the sole picture that Mr Mehta had taken with the Palestinian leader Yasser Arafat. It appeared on the magazine’s website:
“Vinod Mehta – your Dog, Editor seems to be more sensible and rational than you. He did what all rational and sensible ppl. would do, on seeing a photo of the world’s original terrorist..Tear it up..he was not content with just tearing the pic.. he probably didn’t trust you, hence he chewed it up! me thinks, you should interchange jobs with your dog.. he will be a fine editor and you will be a fine housedog… KVIJAI ATLANTA USA”

Mr Mehta might agree over Editor’s editing skills. Once he wrote, “When I meet Editor in the evening after a trying day at the office, most of my troubles go far away.” Another time Mr Mehta had said, “Possibly the best decision I made in my life was to acquire Editor.”

The sentiment, hopefully, is mutual.

[This is the 39th portrait of Mission Delhi project]

Portrait of a marriage