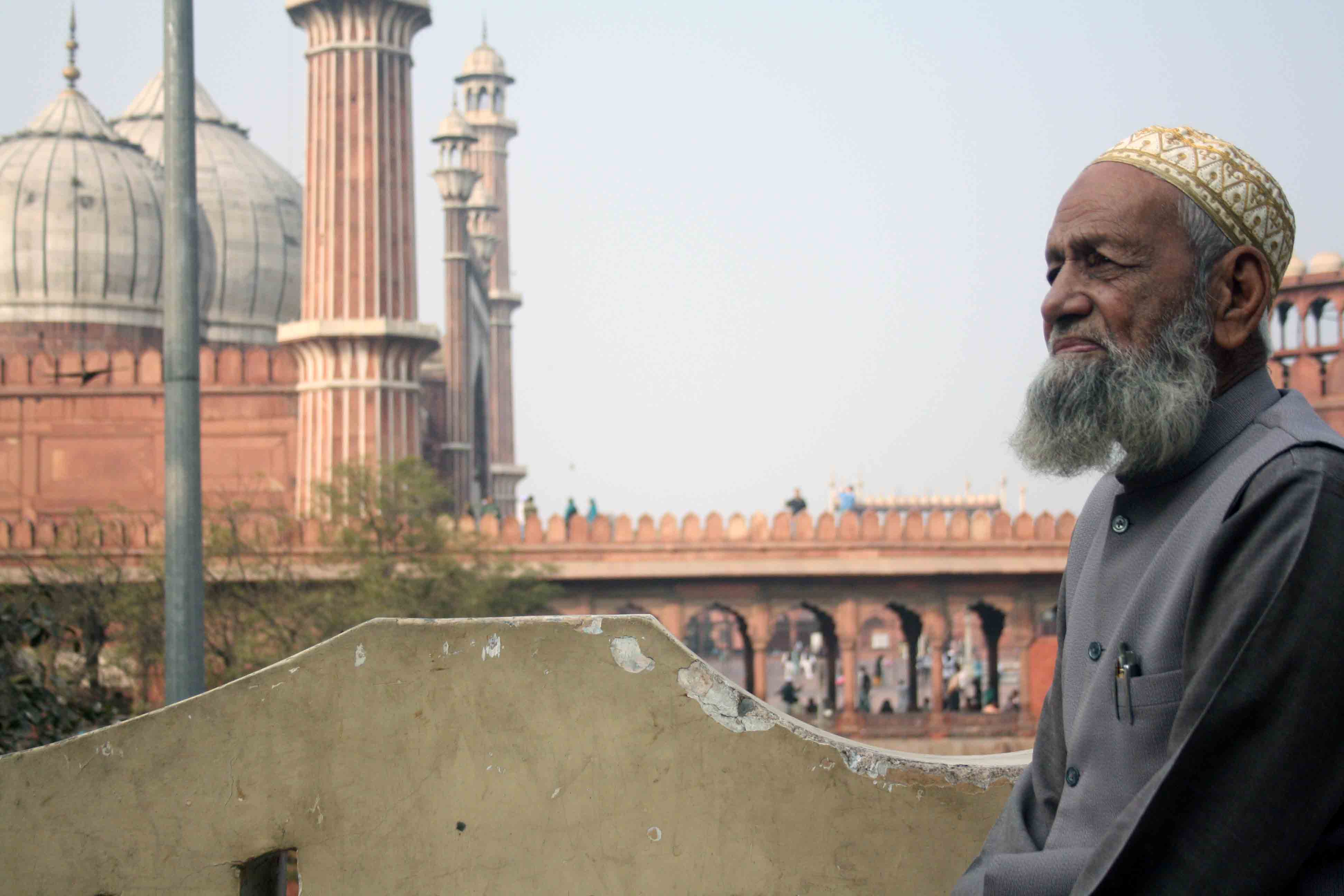 Waving towards Jama Masjid, he says, “It inspires me to write verse.” The Delhi Walla met Amir Dehlavi, 82, at a dilapidated lodge in Shahjahanabad – the area is called Old Delhi by guidebooks. Mr Dehlvi is a manager in the hotel; his younger brother owns it. We are sitting on the roof.

An Urdu poet, Mr Dehlavi lives with his five brothers and their families at a house in nearby Chawri Bazaar. His grey beard, brown eyes and furrowed forehead makes him look as ancient as the mosque, which was built by Mughal emperor Shahjahan in 1658.

“Ayesha Khatoon died two years ago,” Mr Dehlavi says referring to his wife. His grave voice is softened by his sing-song way of speaking. “We were married for more than 30 years.”

A black kite flies behind the poet and soars above the Jama Masjid minaret.

“Ayesha Khatoon was from Kashmir and lived in Srinagar. She came to Delhi only in the winter. I would visit her every three months. Sometimes I stayed in Kashmir for 10 days, sometimes for a month. She was pious and read the Holy Quran during the day, praying for family members as well as for strangers. A good cook, she was famous for her gushtaba, doodh ghosht and sewain. Her hair was golden; her cheeks were white; the shade of her eyes was somewhere between black and brown.”

How did a man from Shahjahanabad marry a woman from Kashmir?

“I first saw Ayesha Khatoon 40 years ago. She was spending the winter in Delhi. Her husband had booked a room in our hotel. He had asthma. His condition was frail. They were looking for a doctor. In those days, I was a free bird. I wrote verse at home, or sat alone in gardens singing my poems. Once I was entering the hotel… she was leaning on the balcony… she saw me, I saw her… I began to drop in daily. I seldom talked to her except making a few polite inquiries about her husband’s health. After his death, I married her.”

Mr Dehlavi presents me a verse that he had composed for his wife years ago:

An admirer of poets Allama Anwar Sabri, Josh Malihabadi, Firaq Gorakhpuri and Allama Iqbal, Mr Dehlavi has delivered his poems to critical acclaim at mushairas (all-night poetry sessions) in various cities. “When I turned 50, I realized I was old and unable to sing the verse the way I used to. So I left that world and started working as a manager here.”

Mr Dehlavi walks to the hotel every morning at seven. He has a private chamber where he listens to old Hindi film songs in the afternoon. He returns home at nine in the night.

“Ayesha Khatoon had diabetes. It was snowing heavily when we were burying her at a graveyard in Srinagar.”

Returning to his room, Mr Dehlavi shows me a slim hardbound book. “This is my collection of verse. My brother published 200 copies at his own expense.”

The first page has Mr Dehlavi’s black & white photo. There are some loose handwritten sheets within. “I occasionally jot down words to kill the hours.”

I carry the book to Mr Dehlavi’s brother who is sitting at the hotel’s reception. “Why did you publish these poems from your own money?” I ask. “ Because they are by my elder brother,” he says.

Back in his room, Mr Dehlvi is lying on the bed, holding a transistor. He is listening to cricket commentary. His eyes are closed.

[This is the 50th portrait of Mission Delhi project] Take out the pen and write Radio is a friend Remembering the days with the beloved