Since this was Delhi, we reached Red Fort one hour after the scheduled start of the concert. It is not considered respectable in the status-sensitive society of India's capital to arrive at a venue on time.

Red Fort is Old Delhi's most imposing architecture – a 17th century monument of sandstones excavated from the burning deserts of Rajasthan. Constructed during the reign of Shahjahan, the emperor who gave Taj Mahal to the world, Red Fort was the grand palace of the great Mughals from whose ornate chambers they used to rule over the immeasurable expanse of their gigantic empire in South Asia.

Feeling smug and arrogant, we held our chin up high as we allowed ourselves to be security-checked by the Red Fort guards – the monument is on the hit list of Islamist terrorists. We entered through Lahori Gate, an entrance from whose ramparts the Indian Prime Minister annually address the nation on the country's Independence Day.

There was no one in the pillared hall of Diwan-e-Aam (Hall for Common People) but Diwan-i-Khaas (Hall for Important People), where once Mughal Emperors used to grant private audience, blinked from a distance as if vacuum-packed in a bright orange bubble. The entire setting was a bit too grand for a Sufi concert; after all Sufis were poor Muslim ascetics who reached out to the God singing uncomplicated love poems.

Yet, the buzz was that of a major Sufi concert, with performances said to be by acclaimed Pakistani artists; and allegedly all the tickets were sold out. But like good Delhites we had managed to get hold of free passes through a friend who had a passing acquaintance with a person friendly with the powerful.

The Ramadan Night Blushed Under the Red Fort Dazzle 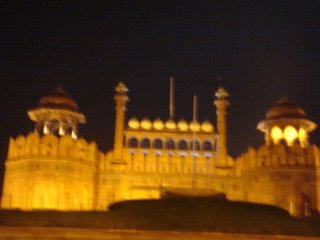 The open air theater was filled with Very Important Persons, popularly known as VIPs. Most of them looked like the very people with whom our friend's passing acquaintance was friendly. We were the tip of the VIP tail which in Delhi lingo meant that we were nothing. But who cared? It was a Sufi evening and we were determined to savour the mood. Besides, we understood that the concert was a part of the people-to-people contact programme between the rival nations, India and Pakistan. This made our peacenik heart swell proudly with uninhibited righteousness.

Diwaan-e-Khaas Invaded by the 36 Virgins of Paradise 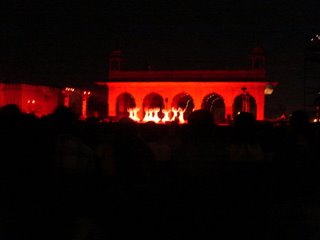 Soft rugs, covered with clean white sheets, were laid down in the front. Extremely important people — politicians, bureaucrats, police officials — were languidly lying down against masnads (round pillows to comfort the back), as if watching a courtesan dance. We sat down on the bare grass.

It was not a rock concert crowd. But the VIPs gracing the event did not seem particularly fond of Sufi music either. There was a tangible lack of enthusiasm. The performers, expecting us to go mad with Sufi spirituals, tried exhorting us to cheer but we remained committed to denying them this pleasure. 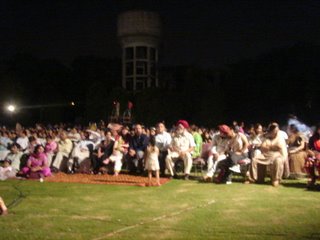 The band on the stage was playing heavy metal music. My companion asked if I was sure this was a Sufi evening. I unconvincingly suggested it could be 'Techno-Sufi', not being sure if such a stream existed. The companion grew confused, depressed and silent. But there was no need to be so – we were told that the great Pakistani Sufi singer Abida Parveen would also be holding forth. As a matter of fact, our entire purpose in coming here was to listen to her live recital of soulful songs. But this being a Delhi event, you could not be sure of anything. The announcer, an irritating smart-aleck who hosts morning shows for a dumbed-down radio channel kept warning us to be prepared for an imminent surprise. This made us a little optimistic. 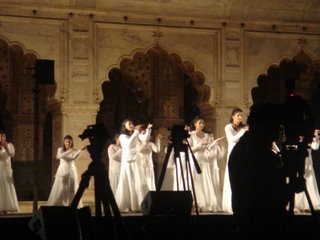 Indian singer Kailash Kher, currently in vogue, was rumored to perform the next number. But it was once again Techno-Sufi, with lots of pretty girls in long white gowns dancing icily with a look-but-touch-me-not warning.

Actually the specter of these 'white ghosts', with numerous folds of their gowns rapidly whirling up and down, against the background of Red Fort ruins was breathtakingly beautiful. In addition, the sky was clear, the moon was almost round, and the grass on which we were lying down was delightfully wet with the October mist. But olfactory nerves tend to grow immune to the most expensive perfumes after a while. So we too were bored by the white ghost trick.

There was another grouse – we were given to believe that the concert was by Pakistani artists but most of the Sufi singers were Indians. There was no novelty. And all of them were singing a remix of the same hit — Dama Dam Mast Kalandar — as if there was only one Sufi blockbuster in the world.

Unfortunately, more indignities were lying in wait. There was to be no Kailash Kher. The wooden girls simply jiggled, like trees in a light wind storm, to his playback recording. We now feared the worst. Most likely the ghosts would wave their arms to the CD recording of Abida Parveen. The Sufi singer would not be here in flesh and blood. That would be an insult not to be borne. 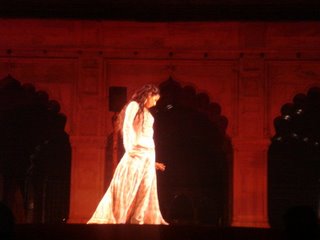 He came. He saw. But we were not conquered. This was Shafqat Amanat Ali Khan, the son of legendary musician Ustad Amanat Ali Khan Sahib of Pakistan. Could this be the lone surprise the infuriating radio jockey was talking about?

We were in love with "Mitwa" (loosely translated: "My love"), the song sung by Mr. Ali Khan and filmed on Bollywood heartthrob Shahrukh Khan in the recent song-and-dance blockbuster Kabi Alvida Na Kehna. We had imagined Mr. Ali Khan to be a deep, somber, good-looking person. But he looked like a whiskey-drinking, gold-chain wearing, Honda City driving, Butter Chicken-eating man from the Delhi's more middle-class and inartistic neighborhood. There was an 'oh-no' groan rising up inside us. We mourned that from now onwards whenever we listened to the beautiful "Mitwa" track, our mind's eye would see the real singer and the song would never be the same again. It was an unfortunate development.

Shafqat Amanat Ali Khan – Does He Look Like a Sufi Mystic? 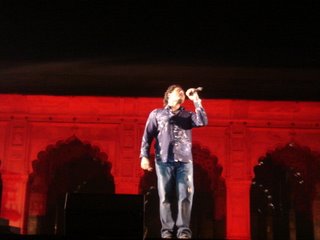 But those were the first impressions. When Mr. Ali Khan started singing Yeh Honsla (loosely translated: "This courage"), a very poignant song, we
rebuked ourselves. How does it matter if he does not look the way we had expected him to be? For God's sake, don't judge the man by his appearance. Look at his talent! We felt nice with such noble thoughts. When Mr. Ali Khan touched our heart with a mellowed Mora Sayya (loosely translated: "My beloved") we mutually agreed that the flowery shirt and the torn jeans did not look bad on him and that his paunch was cute.

Shafqat Ali Khan – Killing Us Softly With His Song 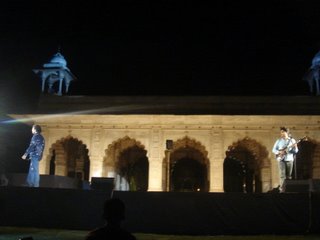 And when Mr. Ali Khan climbed down the stage, came towards us, and burst into "Mere mann ye bata de tu; Kis or chala hai tu" (loosely translated: "O my thoughts tell me this; Which direction are you drifting towards"), not before exhorting us to sing with him, we discovered how appealing he was. Now being so close to him, he looked extremely handsome. We fell in love with him.

The next thunder was not an item girl. It was an item boy – Shehzad Roy, a Pakistani pop star from Karachi. We had never heard of him before but some girls behind us screamed and sighed. We distinctly heard one of them moaning – "Oh, these Pakistani men, I tell you…." 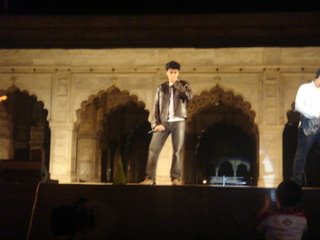 Mr. Shehzad was brash and full of freshness. He seemed pregnant with greater stardom. Before jumping into his number, he dedicated the song to US President George Bush and hoped that one day Dubya would sing it to Condoleezza Rice. The lyrics were – Saali tu maney nahi (loosely translated: "Hey bitch why refuse?"). We laughed with all our heart. 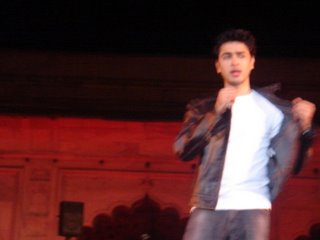 Our fears soon materialized. Abida Parveen never came. The concert concluded with an insipid qawwali (devotional music of the Sufis sung by a group of people). Fortunately, there were two fairies in the team and we spent the time trying to guess which Pakistani province they hailed from.

Qawwali that Failed to Excite 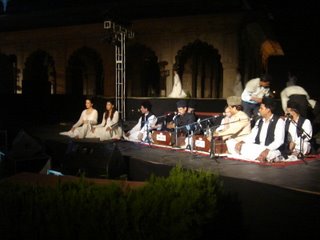 As the curtains draped down over the evening, we had to concede that Pakistan could at least be envied for possessing such divine looking maidens. All their girls were beautiful and delicately built. Alas, here too we were for a rude shock. It was later revealed that the Pakistani singers — there were very few in any case — had outsourced their dance numbers to a Delhi-based dancing school. All those girls, both the wooden ghosts and the Qawwali beauties, were from Delhi!

This was not exotic at all. This was cheating and we were fooled. It was not people-to-people contact. It was client-to-client contact!

These Were Indian Ghosts! 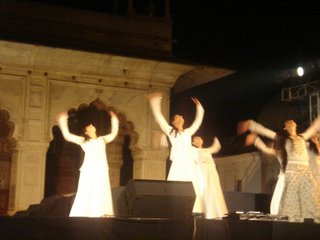 But, as usual, we Delhites were over-reacting. The sight of the subtly-lit Red Fort at midnight and the magic of Mr. Shafqat Amanat Ali Khan were actually worth the price of the free passes.

Goodnight and be good.