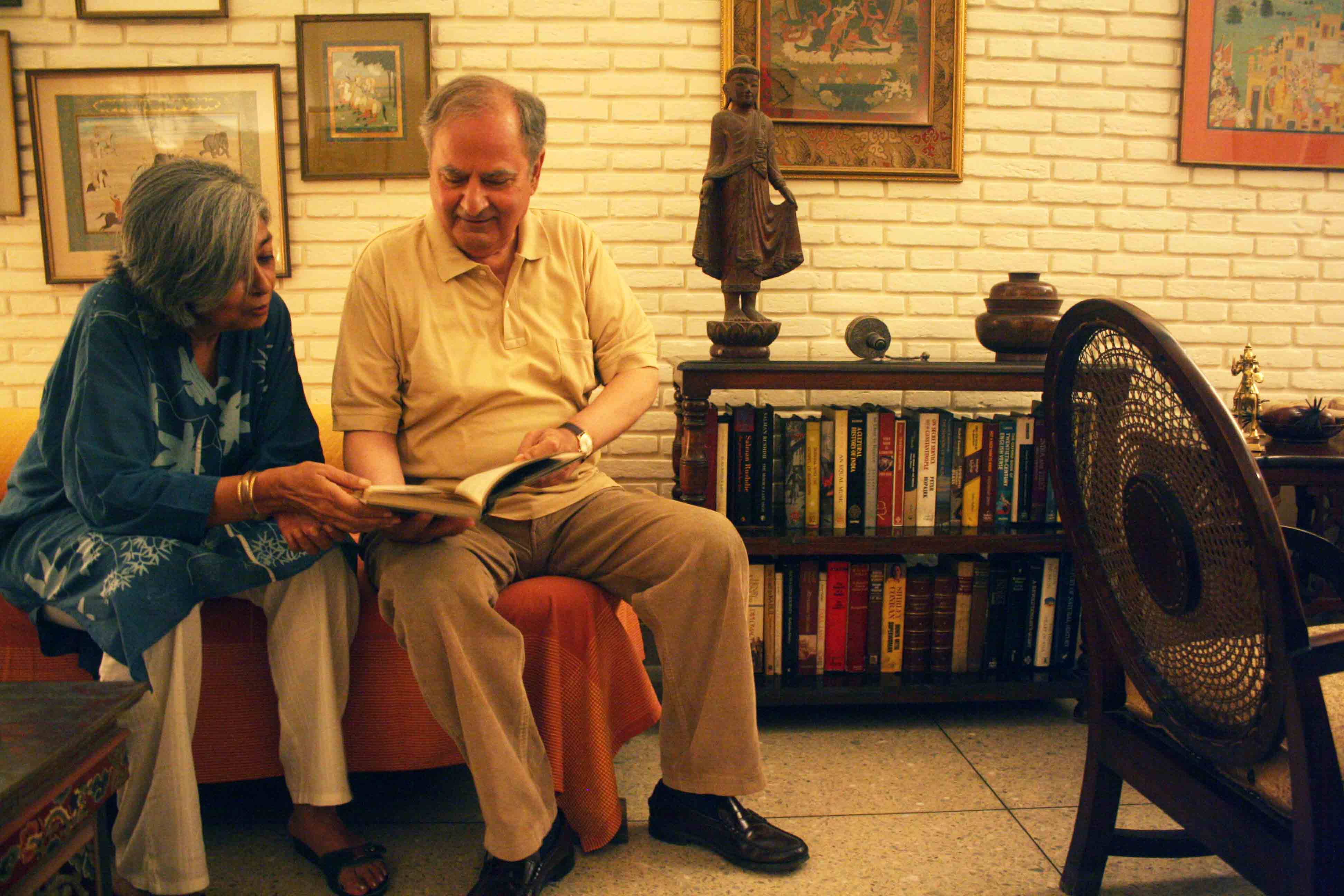 One evening, The Delhi Walla knocks on the door of Nandini Mehta. In her sixties, Mrs Mehta lives with her husband Dalip in a bungalow in Vasant Vihar, a south Delhi neighbourhood.

“The books are scattered all over the place,” she says. A senior journalist who has worked for The Indian Express and Outlook, Mrs Mehta is the editor-at-large in Penguin India. Her voice is as delicate as her fragile figure. “The books are in the living room, in the study, and in the room upstairs. Those that are in the cupboard in the computer room are the ones we are reading at present.”

She leads me to the computer room. It is peopled with authors such as Alice Munro, Patrick French, Orhan Pamuk and Nora Ephron. Salman Rushdie’s Joseph Anton sits on top of The Bookseller of Kabul and The Bastard of Istanbul.

“I discovered her recently,” says Mrs Mehta, pointing to a row of slim volumes by Diana Athill. Taking out Ramachandra Guha’s India After Gandhi, she says, “I’m editing his new collection of essays.”

Another shelf has a well-thumbed paperback of Julia Child’s Mastering the Art of French Cooking. Mrs Mehta lived in Paris for four years; her husband was in the diplomatic service. The books form a map of their trail. “Apart from France, we have lived in the republics of Central Asia after the break-up of the Soviet Union. We had two stints in Bhutan. Obviously, we picked up books from and about all the places we made home. But we’ve given away a lot of our books. Recently, my husband donated hundreds of French books to Alliance Française.”

After a brief pause, Mrs Mehta says, “There’s always a problem with space, and a time comes when you have to make the painful decision to part with your books.”

Her husband enters the computer room. An alumnus of St Stephen’s College, Dalip read history and philosophy in Cambridge. He donated many of his history books to the Stephen’s library. “Those were the books I think I won’t be reading again,” he tells me. His wife says, “Books demand regular cleaning. Instead of being claimed by termites, they should fall into the hands of more readers.”

As we walk to the living room, she says, “We have become older and more fragile, so it’s difficult carting our books from one place to another.”

A coffee-coloured wooden shelf commands attention in the living room. “These are the fragments of my mother-in-law’s library,” says Mrs Mehta.

Gisela Wittgenstein was from Berlin. Her father fought for Germany in World War I. (His black & white photo is placed on a shelf elsewhere in the house.) “We gave many of her German, Latin and Greek books to Jawaharlal Nehru University.”

The mother-in-law’s shelves have some hardcovers in English, too. Almost all are bound in leather. A few are family heirlooms. Dalip takes out a book that is inscribed for his great-grandfather Mehta Fateh Lal; he was the son of the diwan (prime minister) of the princely state of Udaipur.

On the table lies The Mouse Who Would Be King: Innovating Tradition in the State of Chamba. It’s a PhD dissertation by Mandavi, the Mehtas’ daughter. She lives in the hills of Himachal.

The next-door study contains some of the most precious books of the Mehtas, including a centuries-old edition of the Quran. “It was given to me by my mother on my last birthday before she died in 1968,” says Dalip. He shows me a book by the legendary anthropologist Verrier Elwin, who dedicated it to his parents: “To K.L. and Gisela Mehta.”

The opening page has the author’s handwritten inscription:

Ken and Gisela,
In memory of five and a half happy and fruitful years. This is the first copy from the press.
Verrier
27 August 1959

On our way to the first floor, we encounter a large painting by the staircase. “My husband’s grandmother painted it,” says Mrs Mehta. “It’s an impression of a fresco in the Ajanta caves.”

The room on the first floor has an eclectic range of authors: from Victoria Holt to James Joyce, Ian Fleming to Pavan Varma. I also spot a Tintin. “After we moved to this house, following my husband’s retirement ten years ago, we set the books in a random manner… because of laziness,” Mrs Mehta says. “One day we will sort it out,” adds her husband.

For now, to find what she needs, Mrs Mehta relies on Dalip’s “extremely good” visual memory. “He knows exactly where to find any book I would need from our collection.”

“There are some great unread books lying in this house, such as Proust, Balzac and the Russian classics,” says Mrs Mehta, sitting with her husband in the living room. “I read War & Peace only recently at a friend’s cottage in Ranikhet. I didn’t go anywhere and I didn’t socialise. I just sat in the garden and finished the novel in a week.”

Glancing at the book in her husband’s hand, she says, “Maybe I will read Proust and Balzac after my retirement. I might not have to go to Ranikhet. Instead, I will turn this house into my reading resort.”