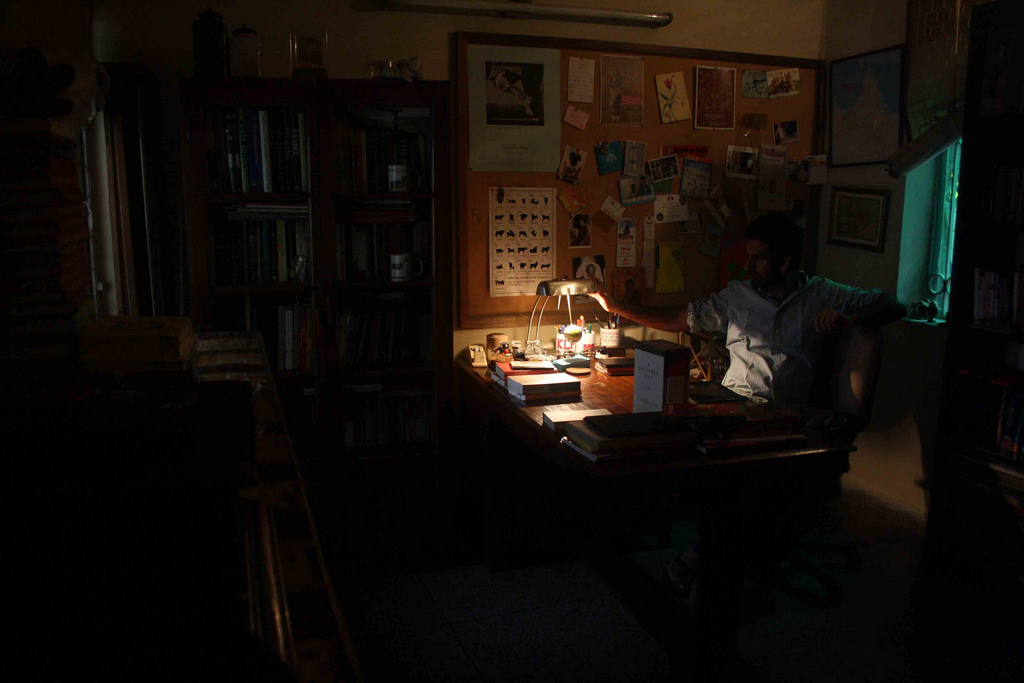 One humid afternoon The Delhi Walla knocked at the door of Akshay Pathak. In his 30s, Mr Pathak lives in an apartment in Vasant Kunj, a neighbourhood in south Delhi.

Telling me that he has never counted the books in his library, Mr Pathak says, “I’m not collecting books to have a number.”

A native of Bikaner, a desert town with no bookshops, Mr Pathak ran away from his home at 18. “I dropped out of school, and never went to college. I think, however, that I’m a closet academic- openly deriding academia and secretly tailing it”

Showing me a hardbound copy of The Romantics, critic Pankaj Mishra’s debut novel about a rootless Indian, Mr Pathak says, “This is the book I had with me when I left home. The protagonist, who is searching for an identity, is discovering a new world through literature. On the way, he is also establishing complex relationships. This is a life I thought I wanted to live and in some ways still do.”

The library has hundreds of books. I spot The Complete Poems and Plays of TS Eliot on one shelf. Another has EM Forester’s Maurice, which shares space with books by Ernest Hemingway and Satyajit Ray.

Talking of authors close to his heart, Mr Pathak says, “The way I look at the world has a lot to do with the style of thinking introduced by Arundhati Roy and Pankaj Mishra. They triggered in my teenage head ideas on how I as an individual should respond to the injustices around. They helped me to imagine an alternate modernity.”

Mr Pathak shows me a first edition copy of Arundhati Roy’s The God of Small Things. “It was gifted to me by an aunt which meant she paid for it. She is a right winger.”

The novel’s opening page has a note in black ink:

Akshay, I’m really proud of you. Keep up this hobby. Nice to know that books are your first love.

The clutter on Mr Pathak’s desk includes a reading lamp, an iPad, and a Kindle – it stores Crime & Punishment and Great Expectations among other classics. Picking up a slim book by the Rajasthani-language writer Vijaydan Detha, Mr Pathak says, “Apart from writing short stories, Detha compiled folk tales from Rajasthan. I’m writing an essay on his works.”

There are more Dethas lying adjacent to an antique typewriter, which is a gift from a friend.

Tapping on his kindle, Mr Pathak says, “I’m also attached to German philosophers like Kant and Schopenhauer. When I started to learn German 11 years ago, these thinkers were my most important motivations to continue with the task. I wanted to read their works in original. Today, I’m quite comfortable with the language but I still prefer to read Kant in English. It’s easier.”

Mr Pathak, who has translated literary works from German to English and Hindi, shows me a rare three-volume set of Vikram Seth’s A Suitable Boy. It has the novelist’s inscription in Urdu calligraphy. “I haven’t read this novel yet. And maybe I never will.”

Flipping through a hardbound edition of Seth’s An Equal Music, he says, “I remember reading it when I was just beginning to explore the world of western classical music. It was winter. The bleak-looking Delhi sky accentuated the melancholic tone of the novel. I have three different editions of this book.”

As I prepare to leave, Mr Pathak, sitting close to his reading lamp, says, “My library is to receive a significant addition. A friend is gifting me Marcel Proust’s In Search of Lost Time.”