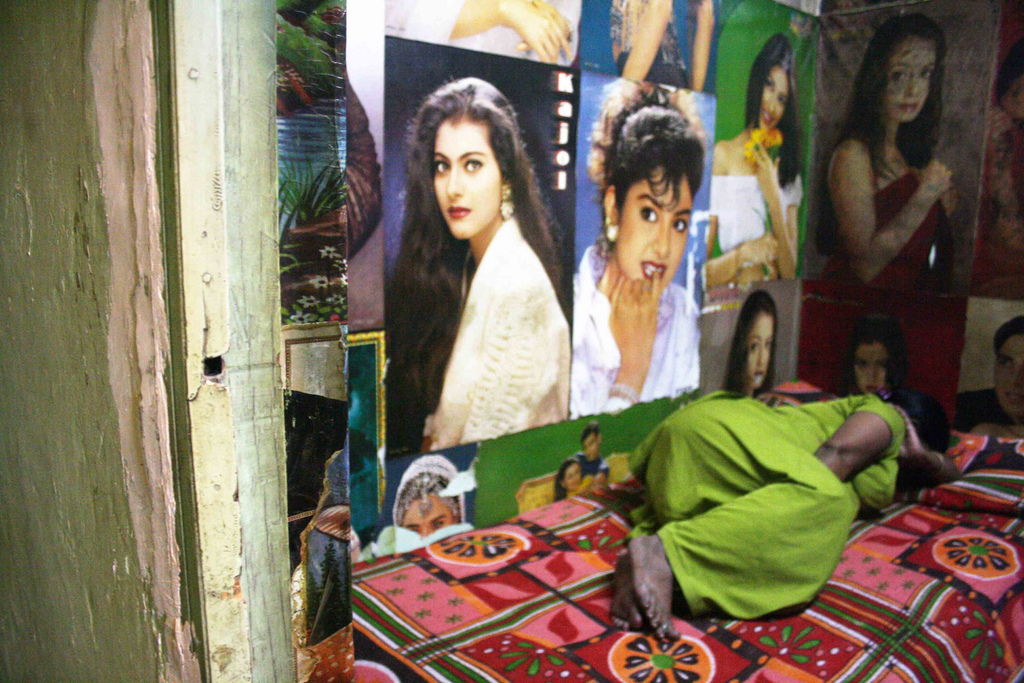 The Statesman Review – On Nobody Can Love You More Mita Ghose discussed Nobody Can Love You More: Life in Delhi’s Red Light District, a book by The Delhi Walla in The Statesman daily. Click here to read it on the newspaper’s website, or see below.

CAPTURED in black and white, it is a world of strange contradictions: cut-outs of a sage and a deity preside over shelves crowded with cosmetics and condoms; sunlight brings a whiff of the outdoors into a darkened room, only to paint prison-bar stripes on its floor.

These snapshots by blogger and writer Mayank Austen Soofi offer haunting glimpses of a world that lies mere minutes from the New Delhi railway station. But few, other than prospective clients, venture there. Mired in poverty and squalor, Garstin Bastion Road or GB Road, the capital’s red-light district, offers attractions clearly intended for public consumption. Yet its denizens — sex workers, brothel owners, pimps and drug addicts — remain surprisingly tight-lipped about their private affairs and close ranks against outsiders with no actual business there.

That Soofi not only managed regular visits as an observer to this notorious locality over three years without coming to harm, but earned the trust of many of its residents sufficiently to invite confidences is, therefore, something of an achievement. Nobody Can Love You More, the outcome of the insights he gleaned from his interactions with the locals, is a sensitive account in words and pictures of life within a marginalized community that reveals, among other things, how tenuous the line can be between ostracism and social acceptance. For all it takes, sometimes, is a father’s death or a spouse’s lack of employment and the resultant slide into poverty to push a woman from grihasti — life in a normal household, in GB Road terms — into prostitution. As Nighat, a young sex worker the author befriended at kotha (brothel) No. 300, puts it, “ You don’t know what happens when there is nothing to eat at home.”

It wasn’t with the intention of writing a book on GB Road, however, that Soofi first ventured into the area. An acquaintance referred him to Sabir Bhai, a brothel owner who operated his business from No. 300 and was looking for an English tutor for his children. Curious about the world they inhabited, the author accepted the job and started visiting the establishment and its environs. As the weeks passed, his interest in “the ordinary aspects of the lives of people who have been shepherded by circumstances into living extraordinary lives” grew. So did his rapport with them. With time, the idea of putting his observations on record began to take shape. The result is a compelling portrait of a world that many disdain, but few attempt to understand.

Enhancing the narrative’s appeal is the honesty the author brings to his subject, even confessing to a certain ambivalence in his attitude to the people he met in the course of his explorations. He admits to the effort it took him to overcome his aversion to their perspective on life, their habits and manners and apparent lack of hygiene. There were times he actually wanted to flee their world and never return, but he checked the impulse, because “If I don’t eat their food, and drink their unfiltered water, why would the people of GB Road share the stories of their lives with me?” Gradually, however, the place grew on him.

It is to Soofi’s credit that he has not allowed his empathy for his subjects to blunt the fine sense of irony with which he juxtaposes the different worlds he straddles ~ the red-light district he frequented and the world of “well-dressed and clean” individuals he admits to being more “comfortable” with. It is just as evident in his cameos of GB Road’s residents. Take Sabir Bhai, for example, who proclaims himself a morally upright man, because none of the women in his brothel have supposedly been recruited by force or trickery. Just as intriguing is his obvious partiality towards the fair-skinned Imran, the only child in his brood that he has not fathered. The two-year-old whom Sabir Bhai dotes on for being “so white, so smart” is, in fact, the offspring of his mate, Phalak, and her affluent American customer who has been absconding since the boy’s birth.

Then there’s Rajkumari, an old, crippled brothel owner, for whom every day is a terrible struggle. “I can’t walk. I can’t bathe,” she laments, but boasts about her azadi (freedom). In GB Road, says Nighat, “life lasts as long as youth lasts.” Sushma, a middle-aged sex worker in No. 300, lends a different dimension to the matter: “Nothing horrible happens to older women. There is God up there to look after her.” Meanwhile, wrinkled and toothless Kanta Amma, who is rumoured to be over eighty, haunts GB Road, offering herself for a few rupees.

Interestingly, it is the children brought up in the heart of such darkness who are free from delusions. Consider what twelve-year-old Omar, Sabir Bhai’s first-born, has to say about the ambiguities inherent in the profession: “It’s right because the women need money for their families. It’s wrong because the child suffers for the work his mother does.”

Pulled in opposite directions, contradiction is integral to the lives of those whose survival depends on the trade. Having sacrificed respectability, they now prize respect. Consider the explanation Sushma offers for the need for secrecy in her profession. If the family or neighbours find out, she declares, “No one will give you respect.” Sex workers dream of earning enough to buy themselves out of the trade and live “in society”; yet Sabir Bhai claims that once they have tasted the “freedom” of a brothel, there’s no going back. Reminiscing about the past, his tone is almost reverential as he describes his predecessor, Maya Devi, an accomplished Hindustani classical singer, as “one of the most respected people in the community”.

The craving for respect in a profession for which the world spares so little is, perhaps, the legacy of a bygone era, when the city’s red-light district was located in Chawri Bazaar and its courtesans were in demand as much for sex as for their talents in the performing arts.

According to RV Smith, a Delhi correspondent of The Statesman whom Soofi sought out for his in-depth knowledge of the area, its residents and its history, “There are other important things, too. Like how to talk, how to behave in society. Even… let’s say, how to eat paan in the correct manner.” In fact, scions of aristocratic families were apparently sent to the courtesans of Chawri Bazaar to learn etiquette. By delving into the trade’s history and expanding the scope of his research, Soofi has not only lent depth to his account, but underscored the tragic contrast between times past and present. Today, with the proliferation of massage parlours and “friendship” clubs, “the red light has gone out into the city. GB Road has been left behind”. The strains of classical music have long died away and it’s less about refinement and respect than Sheila ki jawani.

Probing, yet restrained, this book clearly establishes that impartiality and compassion can co-exist harmoniously and empathy need not obscure the truth. What it does not do is judge or pander to the voyeur. More significantly, its author never allows his journalistic curiosity to override his sense of loyalty to his subjects. Refusing, for instance, to divulge the reason for Nighat’s “abrupt exit” from No. 300, Soofi simply states that her “reputation must not be compromised”. By doing so, he disproves Sushma’s contention that “a friendship that starts in this place always ends in this place.” For the author, a bond once forged, is forever.