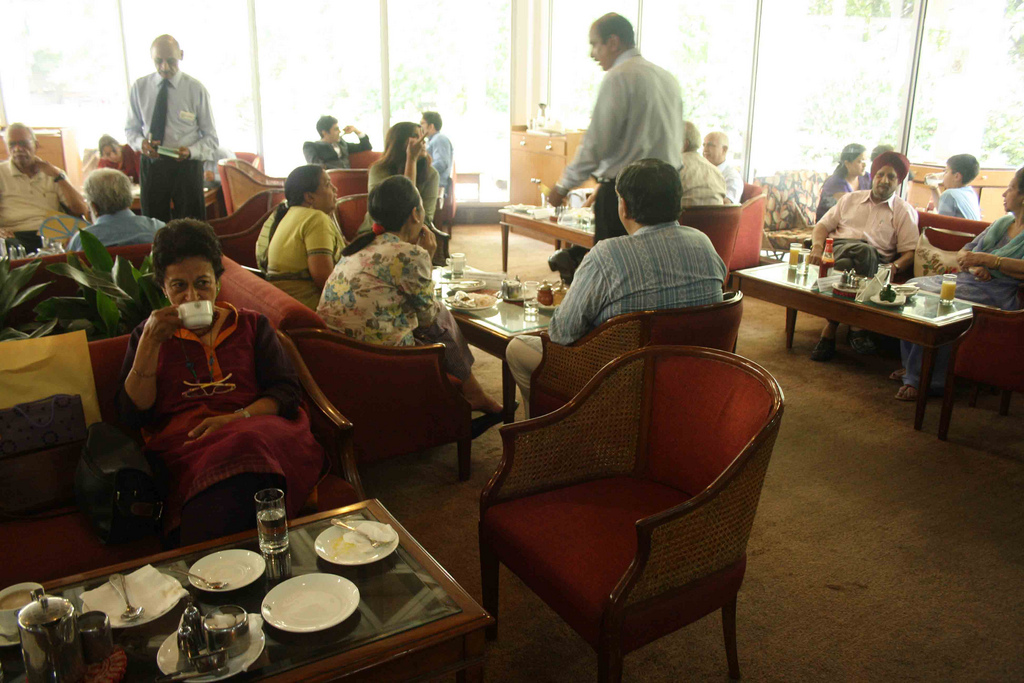 Dining with the VIPs.

Request the fifth table on the right. For before he became president, A.P.J. Abdul Kalam would take his vegetarian thali there. The table was also preferred by late prime minister V.P. Singh. Congress party chief Sonia Gandhi has dined at the same spot.

This first-floor hall and the sunnier Lounge downstairs offer a window into a Delhi institution that was conceived “for the deepening of true and thoughtful understanding between peoples and nations”.

Ranjana Sengupta, author of Delhi Metropolitan: The Making of an Unlikely City, believes that the IIC’s engine is the Dining Room of the main block. A regular since the 1970s, she says: “Here over platefuls of fried fish and tartar sauce, spinach Florentine and apple pie, the inside stories of the deals, the changes in political alliances, the postings and transfers of bureaucrats, are exchanged; rumours are considered, then disseminated or killed. The premiership of I. K. Gujral is said to have been hatched in the private dining room.”

The centrality of the Dining Room in the social life of the members-only IIC is attested to by a book, Secrets From the Kitchen: Fifty Years of Culinary Experience at the India International Centre, by Bhicoo Manekshaw and Vijay Thukral, who have been associated with the catering at the centre.

But the glossy hard-bound remains discreet on the eating area’s spicy tittle-tattle.

“He is secular but he sits on the right-wing table,” says a member, speaking on condition of anonymity. She is referring to a frail-looking columnist. We are seated downstairs in the Lounge, a place which Ms Sengupta describes as more frivolous, where gossip is the order of the day.

Adjusting her glasses on the bridge of her nose, the woman surveys the masala-cheese-sandwich-eaters, scanning for faces. Pointing to a corner table, she says, “That’s presided over by (former Jammu & Kashmir governor) Jagmohan. He sits with retired bureaucrats and out-of-work journalists talking of Pakistan and Rahul Gandhi. The BJP (Bharatiya Janata Party) table comprises Arun Jaitley and friends.” Next, pointing to a secular socialite whose daughter is married to a right-wing politician, she says, “That woman thinks she is still a culture czarina.”

The lady complains that the waiters no longer wear gloves — “Ah, even the beef sandwich is no longer on the menu card!”

The same fate befell the ham sandwich. “As people became more rigid in the world outside, the non-kosher dishes inside went off one by one and today we have a platter called Ghar Jaisa Khana,” says Ira Pande, former chief editor of the IIC’s publication division. “Once an exclusive place for scholars, diplomats and foreign journalists, we now have lawyers and MPs. The demographic shift is reflected in the kinds of conversations at the Lounge.”

Another woman, a senior IIC staff member, expresses a similar opinion. Dressed in a handloom sari, she also wishes to remain anonymous. “During the 1960s, the centre buzzed with those legendary figures driving forward India’s craft movement; we would hear people such as Kamaladevi Chattopadhyay, Pupul Jayakar, Jasleen Dhamija and Iola Basu chatting in the Lounge and we too ended up talking about classical dances and folk traditions. Following the emergency, new members brought in political babble. Now people shout!”

The decibel level might have gone up because the centre is more eventful, with exhibitions, receptions, screenings, concerts and conferences. The membership strength has grown from a few hundreds in the initial years to 7,000. Since the food is delicious and moderately priced, many members choose to entertain their non-member friends in either the Lounge or the Dining Room. “The bar is for the ‘youngsters’, i.e., those below 60,” says Ms Sengupta, “and no one in the main IIC building knows anyone who frequents the Annexe: that’s a less important country.”

In the old days, the Lounge had a church-like silence; foreign scholars sat alone, the only sound was the rustle of pages. The aged napped on the grey tweed sofas that could seat six people. Now the geriatrics — the IIC has a dozen members who are above 90—doze off in the library. The employees talk fondly of Mrs J., who would arrive at the Lounge at 11.30am daily and gossip about the people present there before falling asleep. After waking up, she would resume her gossip. One day, on spotting a woman, she is said to have exclaimed, “Oh dear, she is as dark as Egypt’s night.”

As new restaurants appear with every change of season in Delhi, IIC’s Dining Room and Lounge offer its patrons the comforting stability of a largely familiar menu and a team of many long-serving waiters who are acquainted with the eccentricities of their guests. In fact, perhaps the most civilized people one could meet in the Dining Room are its service staff. Experienced, dignified and respectful, they deal with Very Very Important People as smoothly as a well-oiled machine.

“When he came to the Dining Hall last year, I asked him, ‘Are you (actor) Aamir Khan?’ After he nodded, I said, ‘I am Aslam Khan. I will show you your seat’,” says the senior catering supervisor. A few months after she lost the election in 1977, Khan served former prime minister Indira Gandhi an apricot-filled meringue which the chef had named in her honour. Khan says, “Madam asked me ‘Yeh kya hai? (What is this?)’ I said, ‘This is Gateau Indira. It is just like you—tough from the outside, soft from the inside.’ Madam started laughing.”

The Dining Room staff is privy to the weaknesses of the powerful. Congress party member Janardhan Dwivedi enjoys sautéed broccoli and paneer tikka. BJP leader and former deputy prime minister L.K. Advani partakes of vegetable cutlet and kesar walla doodh. Union minister Anand Sharma has a passion for IIC’s palak paneer—so extreme that he sometimes orders it on the phone while on his way. Waiters say that novelist Chetan Bhagat—yes, he too is a member—is on a diet and has been advising everyone to say no to rice. Almost every IIC diner says yes to the honey and fig ice cream—the Dining Room’s most popular dessert.

In 2012, disaster struck. The ice-cream machine broke down to the distress of many, including industrialist Deepak Khosla, who offered to send his own engineer for repairs. Mr Khosla, who dines at least twice a week at the IIC, says: “I made a lot of noise and even jokingly asked (IIC director) Kavita Sharma what kind of centre is she running if she can’t give me my fig and honey.” The administration soon got a new machine.

There is no record of the late Dara Singh’s sentiments towards the aforementioned dessert but once, at the end of a seemingly satisfying meal at the Dining Hall, the waiter handed him a new suggestion book requesting him to write something. The wrestler-actor flipped through the empty pages and said in Punjabi, “Ethhe wich kuch likha hi nahin. (Nothing’s written in it).” After prolonged deliberation, he wrote: “Food is good. Service is ok. Thank you.”

Fig & Honey, and other curiosities