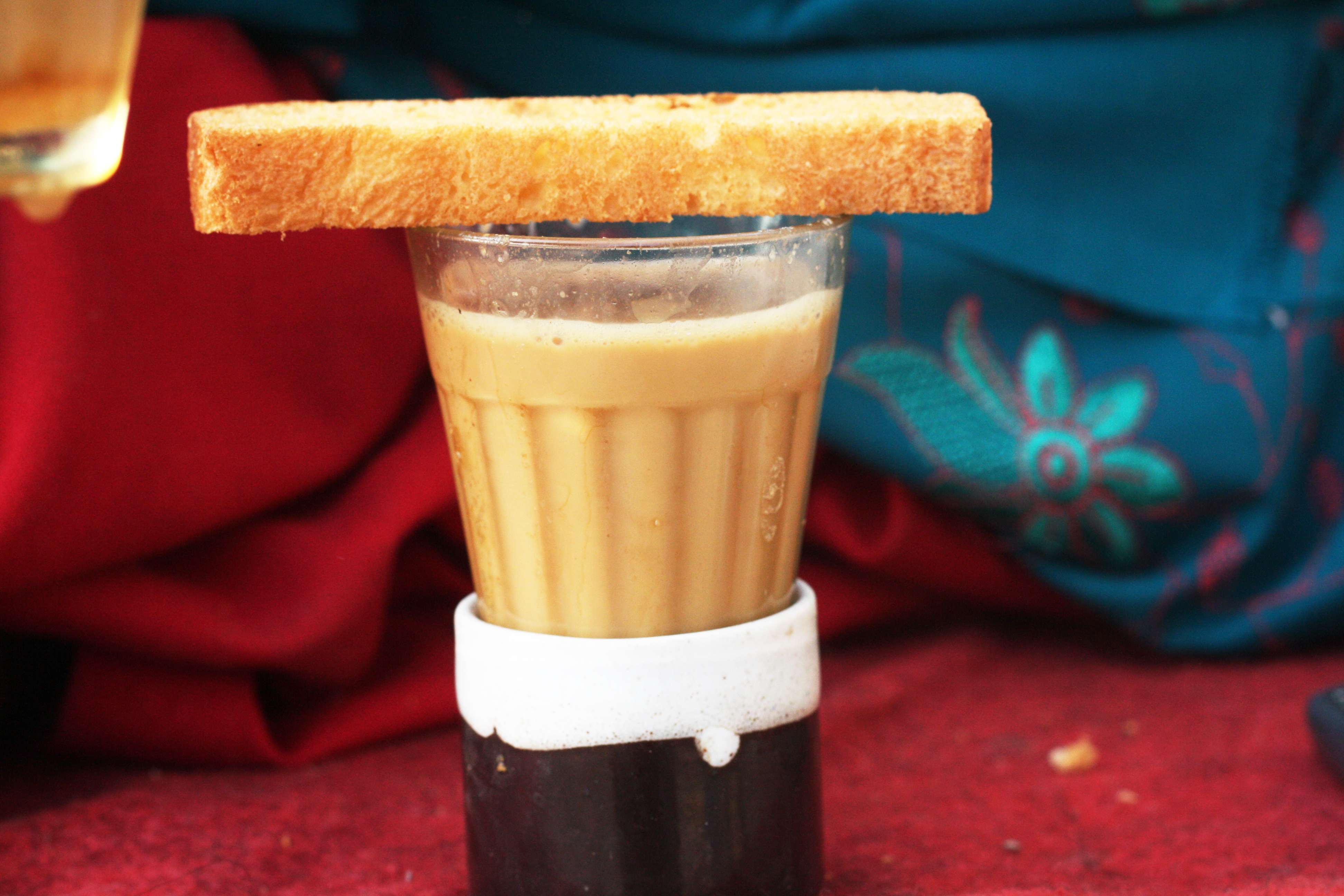 The pavement tea stalls of Old Delhi are famous—or notorious, according to the individual’s taste—for their extra-sweet, extra-milky, extra-gingery chai. If you are a tea seller’s regular patron or if he likes your face or your political opinions, he might generously add spoonfuls of cream too.

No surprises thus far. This is the Walled City’s high tea traditions.

However, one aspect of Old Delhi’s tea-drinking culture has not been investigated by our city’s food chroniclers—the practice of serving chai in a glass tumbler, held in a china cup.

Why this gimmick? After all, in most parts of Delhi, pavement stalls serve tea either in a glass tumbler or in a cup. If you visit Old Delhi dwellers in their homes, you are served chai just in a cup.

The Delhi Walla walked through the Old Quarter’s narrow alleys and talked to a couple of chaiwallas to find the answer. Each of them poured forth a different response, all of which are true.

Every morning in Bazaar Chitli Qabar as uniformed children troop out of their cramped windowless homes and wait for rickshaws to take them to their respective schools, both sides of the street are taken over by footpath traders. The first thing they do after opening their establishments of ladies’ suits is to send their errand boys to Maqbool’s tea stall, bang opposite Khajoor Wali Masjid (the date tree that gave the mosque its name no longer exists). Mr Maqbool, whose stall consists of a gas cylinder standing under a rickety table, serves chai in the typical Purani Dehli style—that is, in a glass tumbler held in a ceramic cup. Explaining the antecedent of this custom, he says, “This is the trend here. Many people like to share their chai with their friend or their shop assistant, so they pour half of the chai into the cup for the other person. That’s why we use both cup and glass.”

This idea is not acceptable to Muhammed Zia, a tea vendor in the nearby Gali Sooiwallan. “That’s not the real reason. We place the glass in the cup so that if the customer finds the chai too hot to drink, he can cool the chai by pouring it between the cup and the glass (many times over).”

A thoughtful-looking man with a long white beard quietly listens to Lateef. One of his daily customers, the man says in chaste Urdu, “Old Delhi dates from the days of Mughal emperor Shahjahan. The raeeszade (rich people) in the royal court consumed chai only on special occasions, sometimes even as medicines, whereas ordinary Dehliwallas were not used to chai as we are now. The British gave us this addiction.”

There could be elements of truth in the elderly man’s argument; but tea drinking was not an unfamiliar habit at least during the final days of the Mughal-era Delhi. A passage in Ahmad Ali’s Twilight in Delhi, a classic Walled City novel, evokes the domestic comfort of chai down to the details of the cup:

“On summer noons he would sometimes ask the children to press his legs and arms. In the afternoons, after the lessons, he would give them tea, the one thing he was addicted to. Ghafoor would bring the samovar and put it on the floor. When the water started singing Mir Nahal added tea leaves, cinnamon and cardamom to give it flavor. In the meantime Ghafoor had taken out beautiful cups and spoons of real china with blue flowers painted on them, from the almirah in the wall. The cups were beautiful, narrow at the base and broader near the brim, without handles; and the spoons were big and lovely, and matched the cups in color and design. Mir Nahal added milk and sugar, and gave fluffy biscuits to the children who dipped them in the tea and ate them with the spoon.”

Not much has changed in the manner of tea drinking since Twilight’s period-setting except for the introduction of pairing the aforementioned cup with the glass tumbler. However, lately, an increasing number of tea stalls are replacing the customary combination with the use-and-throw plastic cup, which is favoured more by customers because of their supposed cleanliness.

In other words: a few more years and Old Delhi’s glass-and-cup tradition will be history. And then you will probably get the pleasure of being served chai in glass and cup only in some retro-themed tea lounge in Hauz Khas Village.