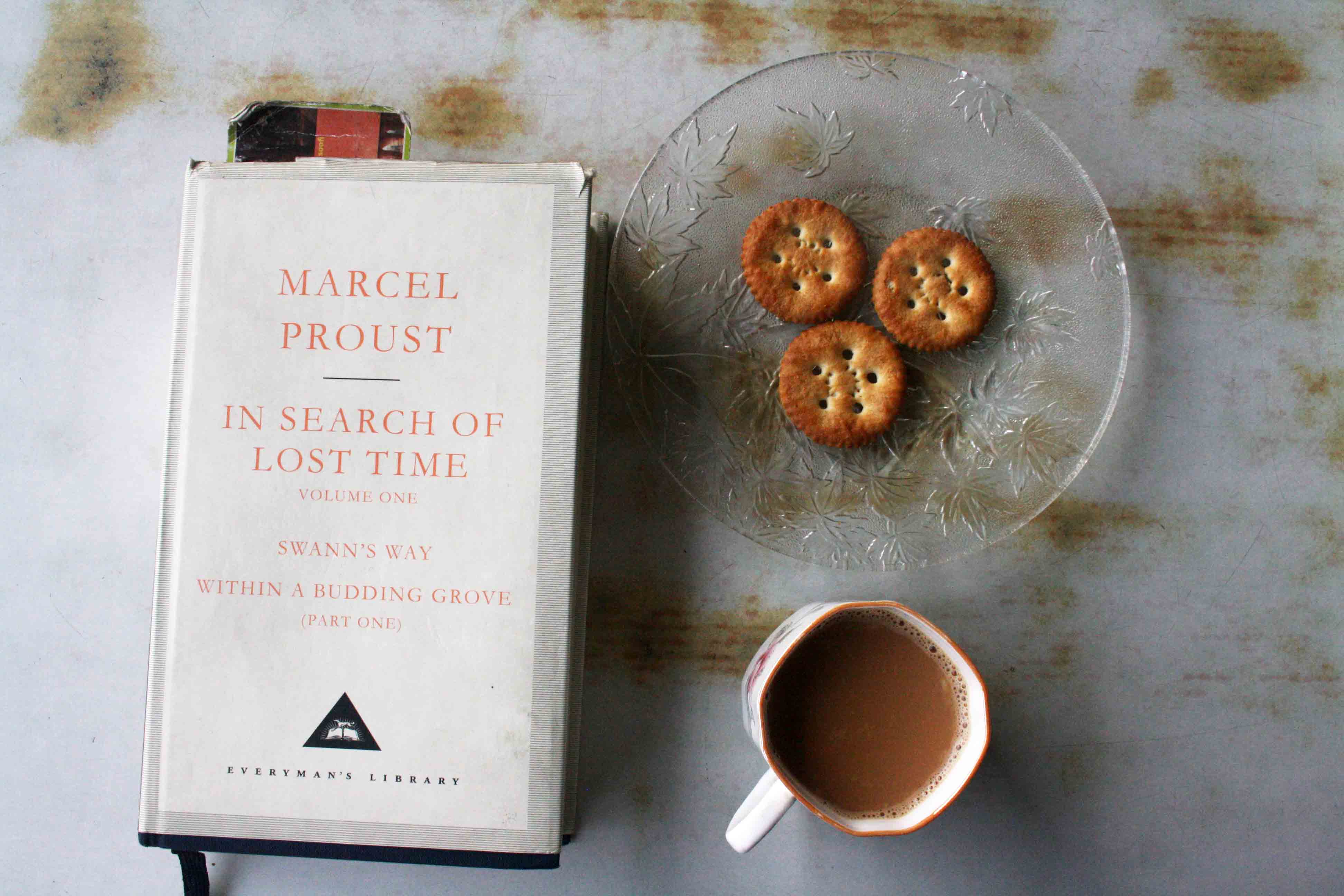 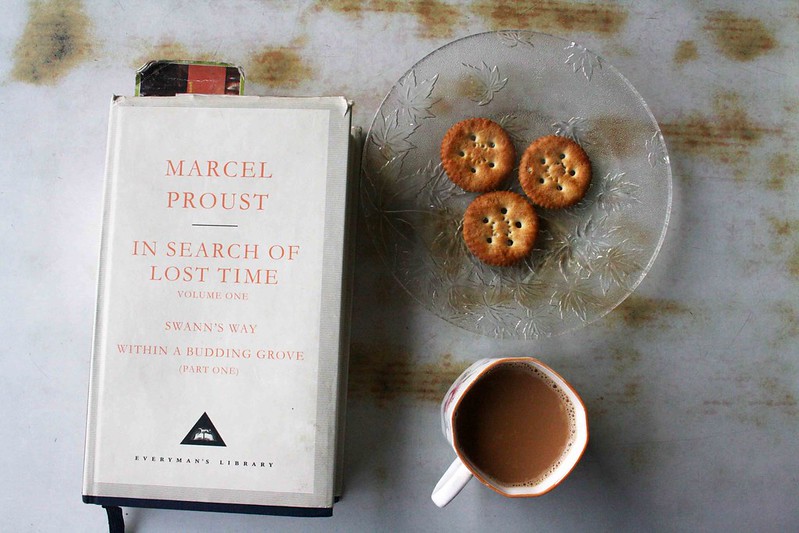 10 July is a special date. It is the Happy Birthday of Marcel Proust, author of the seven-volume French novel À la Recherché du Temps Perdu, known to the English-speaking world either as Remembrance of Things Past, or lately as In Search of Lost Time, or, simply as an unreadable novel that is too long and has too many long-winding sentences.

The Delhi Walla gives you 10 talking points on Hazrat Marcel Proustuddin and his seemingly endless novel. These tips could come handy in case you come across any wandering Proustian — a rare specie in the best of seasons.

1) À la Recherché du Temps Perdu has seven volumes — all have different titles. The original French edition was published across 14 years. The final three volumes were published after Hazrat Marcel’s death in 1922. He was 51. The novel has more than one million words. The English-language Modern Library edition, which comes in a six-pack boxed set, has more than 4,000 pages.

2) Swann’s Way, the first volume, infamously starts with the narrator trying to sleep, or so it seems to an unsuspecting reader. The manuscript was refused by three major French publishers. One publisher, while rejecting the book, sent a note to Hazrat Marcel, saying, “My dear friend, I may be dense, but I fail to see why a chap needs thirty pages to describe how he tosses and turns in bed before falling asleep.” Finally, Hazrat Marcel had to pay from his own pocket to get the first volume of his life-work published. For this, he had to resort to a little-known Paris publisher.

3) The first volume was dedicated to Gaston Calmette, who was the editor of the prestigious Le Figaro newspaper, and who was shot dead in his office by the wife of a former French prime minister.

4) Hazrat Marcel’s father was a devout Catholic and his mother Jewish. The father was a famous doctor who travelled to countries as far as Persia (now Iran) in order to determine how to save Europe from cholera — our India’s gift to the world. He also wrote many books; one was titled The Treatment of Neurasthenia. Hazrat Marcel himself suffered from asthma. Incidentally, he wrote his novel practically holed up in his cork-lined room. And to those who get kicks from knowing about famous peoples’ sex lives, Proust happened to be a homosexual, though his biographers are almost certain that he never had sex after he started working on his novel.

5) 1913, the year in which À la Recherché du Temps Perdu first made its appearance, was also the year in which Bengali poet Rabindranath Tagore received the Nobel Prize for literature. Tagore had another connection with Hazrat Marcel. One volume was originally titled La Fugitive, which was changed by Hazrat Marcel because he did not want it to be confused with La Fugitive, the title of the French translation of Tagore’s collection of poems. However, long after Hazrat Marcel’s death, the said volume’s original title was restored.

6) The first foreign language in which Hazrat Marcel’s novel was translated was English. Its first six volumes were translated by Charles Kenneth Scott Moncrieff, who served as a captain in the Scottish Borderers during World War I. The translation’s first title, Remembrance of Things Past, was lifted from Shakespeare’s Sonnet 30. The final volume was translated in the UK by novelist Stephen Hudson and in the US by Frederick Blossom. In 1981, Terence Kilmartin, literary editor of The Observer, made revisions on the Moncrieff translation. This version was further revised by British poet D.J. Enright in 1992 when it was published by Modern Library as In Search of Lost Time. In 1995, Penguin UK undertook a new translation. Each of the seven volumes was by a different translator. The first — Swann’s Way — was translated by award-winning American writer Lydia Davis.

7) The first English-language-annotated edition of Swann’s Way was published in November 2013 in time with the volume’s centenary celebrations. It was edited by William C. Carter, Proustian scholar and the author of Marcel Proust: A Life. Mr Carter intends to annotate each of the succeeding seven volumes in coming years.

8) If you have no intention of reading the novel, and you still want to fake familiarity with Hazrat Marcel’s great work, just mumble something about how the very sight of madeleines makes you long for Proustuddin’s “delicately-crafted oceanic masterpiece.” Madeleine, as any Proustian will tell you, is a buttery tea cake that makes for the most memorable scene in the novel. The narrator gets reminded of his childhood after having a bite of the tea-soaked cake. The madeleine anecdote takes place early in the first volume, and it is so well known among Proust readers that the latest English translation of Swann’s Way (the one by Mr Carter) depicts the cake on the cover.

9) Marcel Proust dreamed of India. Once he was asked by a newspaper how he would spend his last hours on earth if he knew that a great calamity was about to end his life. The novelist talked of three things: he would throw himself at the feet of Miss X, go to the Louvre (in Paris) and take a little excursion to India.

10) If somebody dares you to describe À la Recherché du Temps Perdu in a single short sentence, keep your hand on your heart, close your eyes, take a deep breath, give out a long sigh and say, “Ah, it’s a novel of our feelings.”

The way by Proust 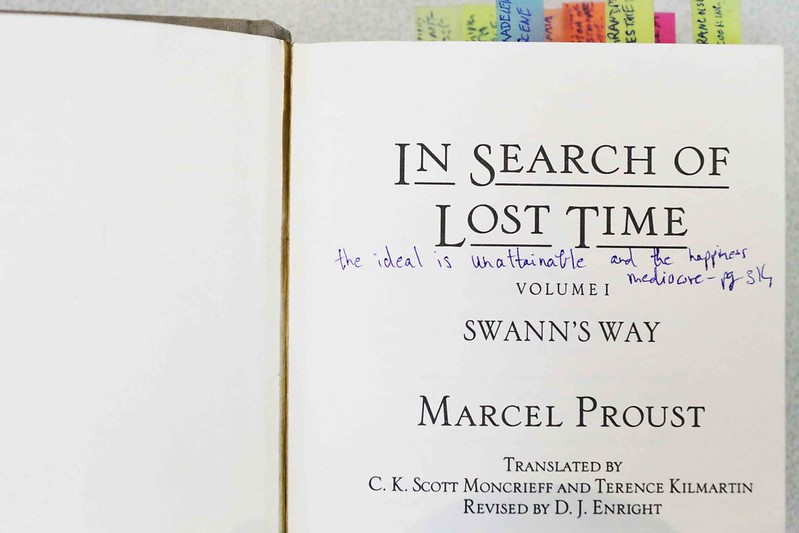 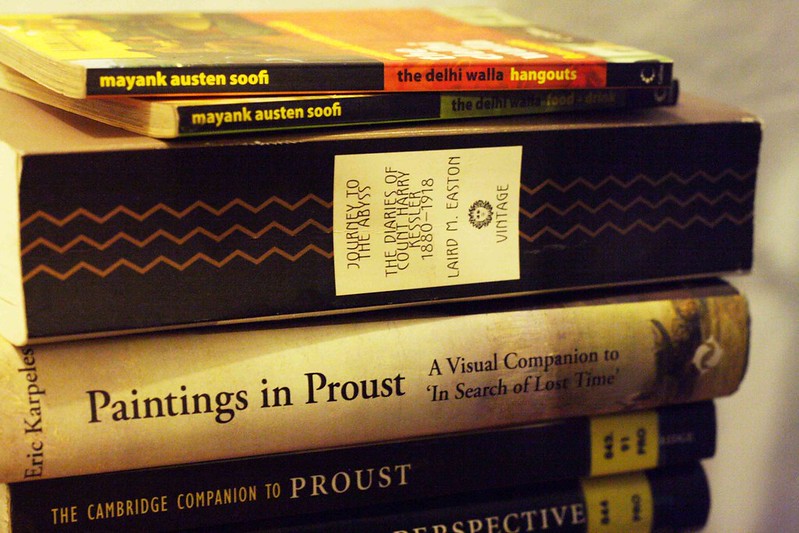 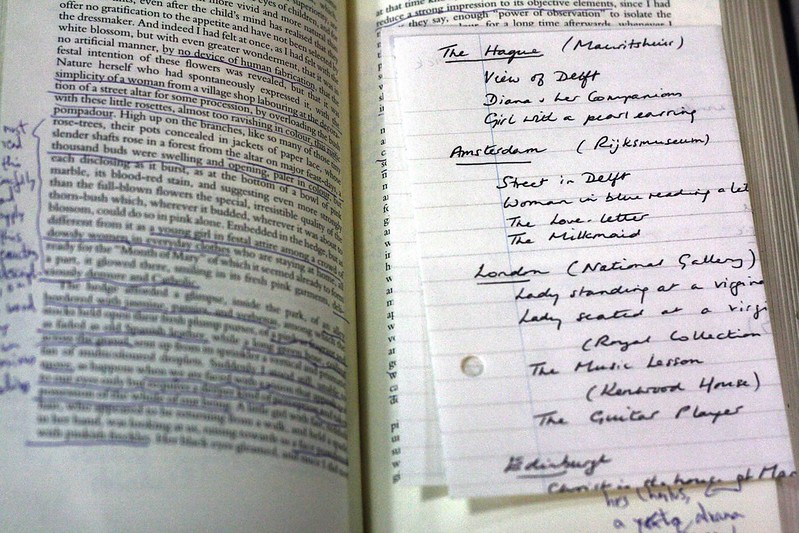 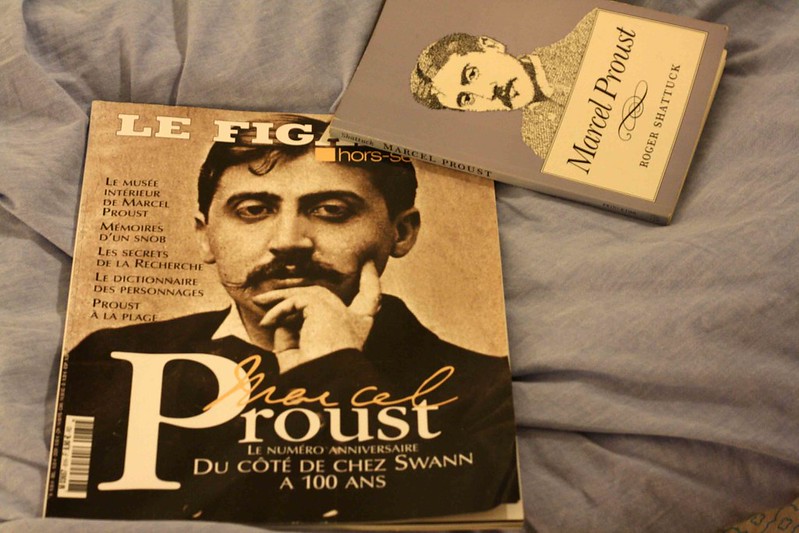 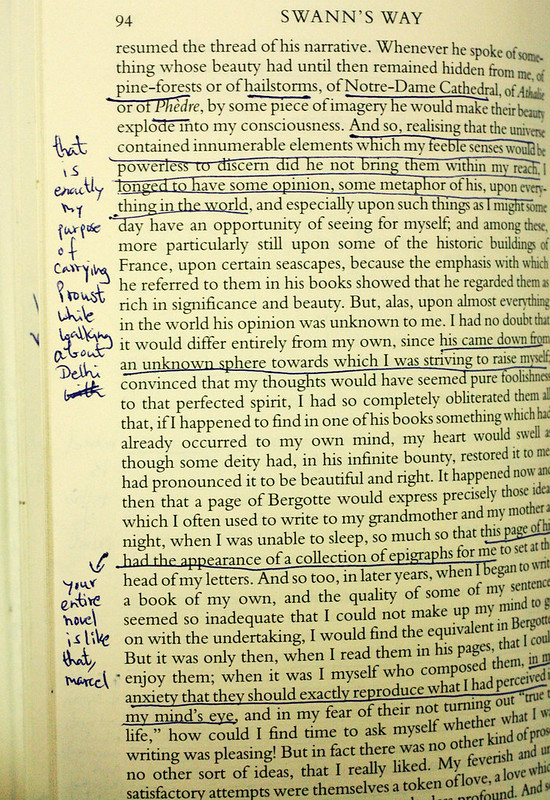 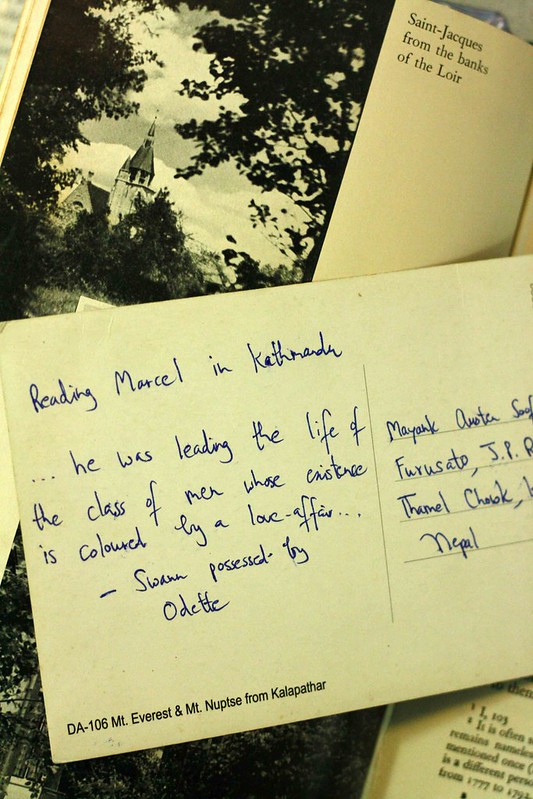 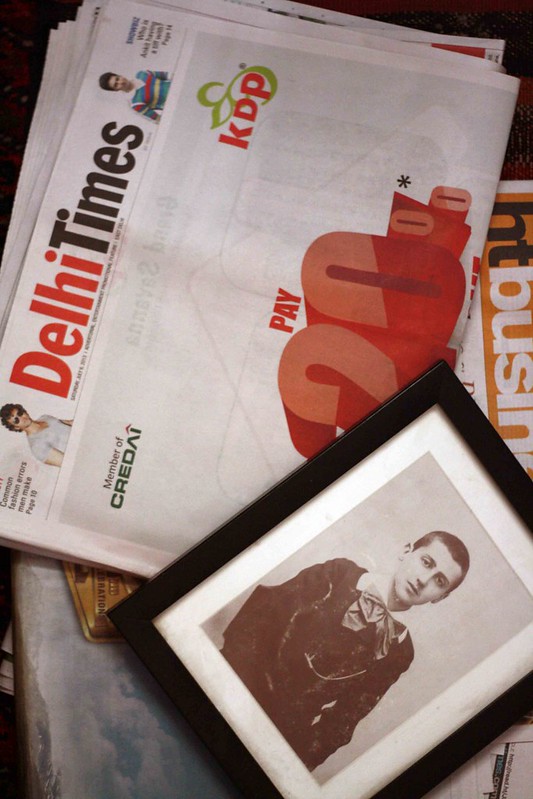 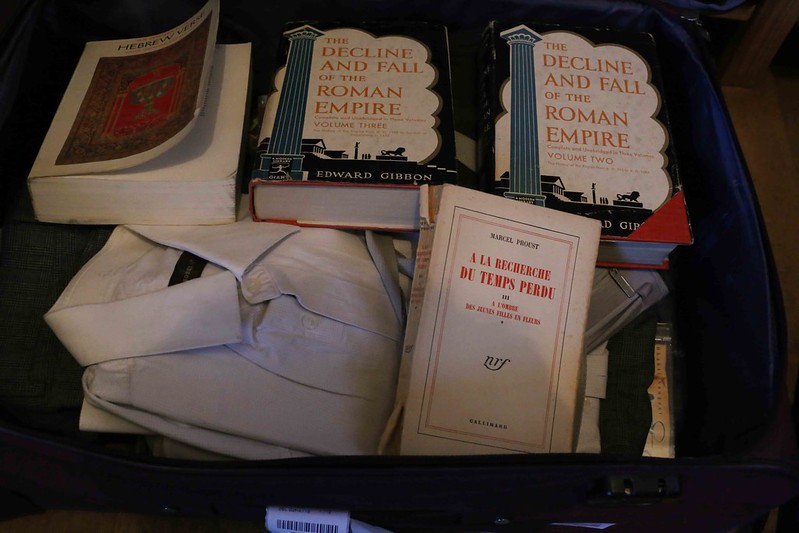