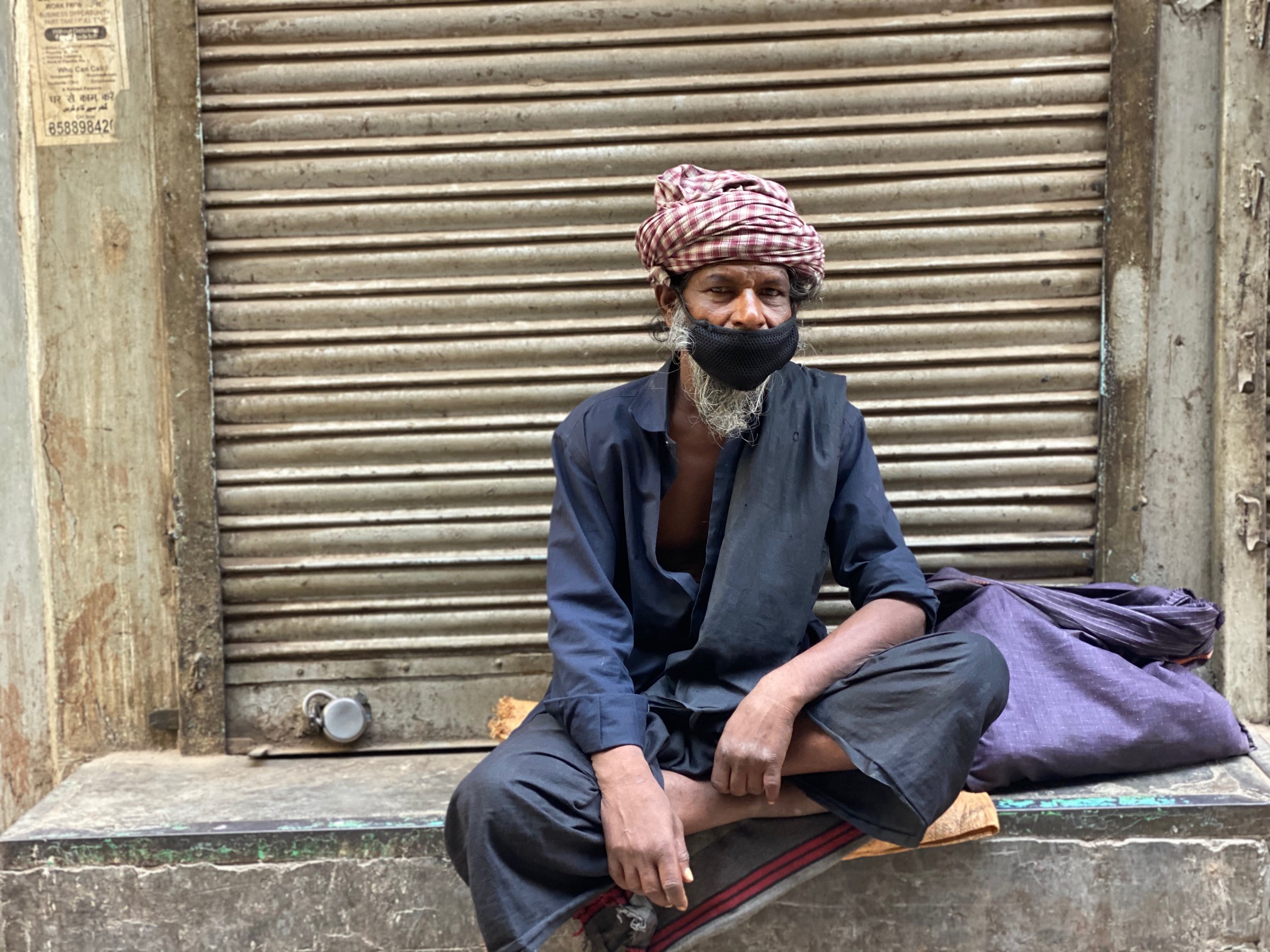 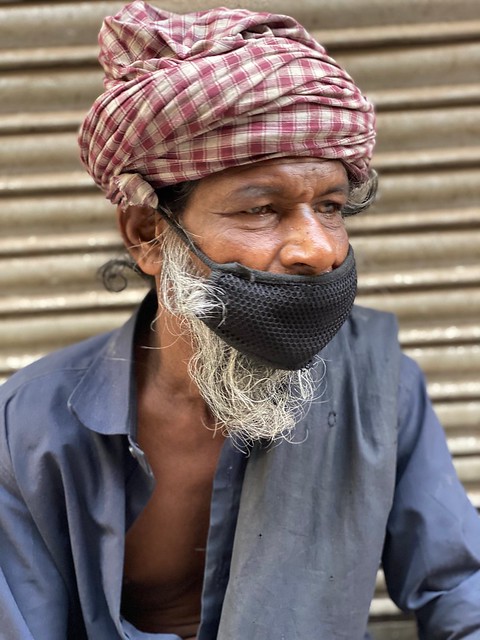 He appears every morning on this central Delhi street. And sits on the pavement, watching the passersby go by.

“I’m a beggar, why to hide,” he mumbles jovially but without showing any smile.

He is wearing a black kurta atop a black lungir—the only bright shades about him are coming from his scraggly white beard and orange chappals. He is perched on a brown plastic mat, spread out in front of an artificial jewellery shop whose shutters are yet to open.

And what can be his name?

The man at last turns his head towards his interlocutor, but his gaze is curiously directed, as if it were more interested in examining something invisible that exists out there in the infinity.

He draws a deep breath, slips his left hand into the deep pocket of his kurta and languidly draws out a beedi. Showing no hurry, he lights the beedi with great gravity of manners, and starts to smoke.

Looking intensely at the smouldering end of the beedi, he finally opens his mouth to speak. “Rahul, my name.”

He raises both his arms and mutters resignedly, “You can see…. I don’t earn… I’m a beggar.”

Next moment, his fingers start to play with the folds of his lungi as if he were a skeptical shopper feeling the fabrics of a sari, the quality of which he is not sure of. Responding to a query, he says, “I have been living alone in this city for many years.” He sleeps at night near a “shaadi ghar” (wedding hall) nearby.

Soon enough, another bearded man comes over and sits beside him. They do not exchange any greeting but the friendly way they silently acknowledge each other indicates that they know each other.

Rahul goes on to inform that he is from the mountain state of Himachal Pradesh “but I haven’t been home for a long time.”

He was not always a beggar, he clarifies without a prompt. He used to work in a mela in a hill town, and was in charge of operating a jhoola. “One day I fell down from the jhoola and broke my arm.”

At this point, he readjusts his seating posture, straightens his back, and pulls down the kurta sleeves to show the affected shoulder, saying, “My right arm doesn’t work… that’s why I could no longer do labour.”

His family left him, he says, including his wife and three children.

Now a municipal sweeper appears. Rahul gets up as if on cue, and swiftly moves away, leaving behind his plastic mat and bag. As the sweeper goes away and the dust cloud settles, he returns to his spot and sits down again. He fiddles into his bag and takes out a mask, tying it about his face with as much gravity as he had shown while lighting up his beedi a few minutes ago.

Soon, a nearby chai seller sends him a cup of chai, his daily free treat to the man.

Rahul says that he will get up only after the artificial jewel shop owner arrives to roll up the shutters of his store.

[This is the 325th portrait of Mission Delhi project] 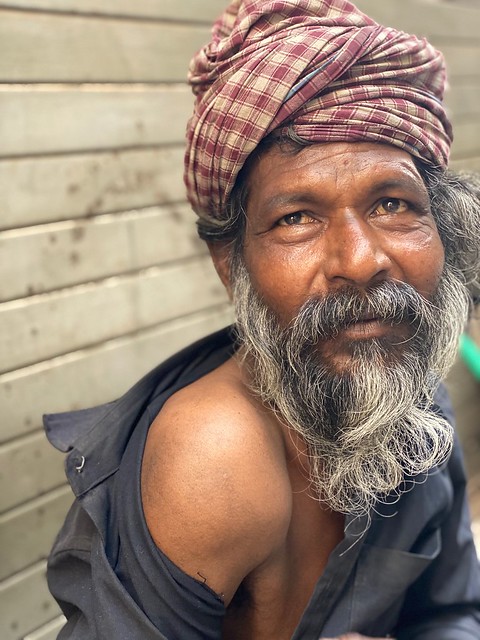 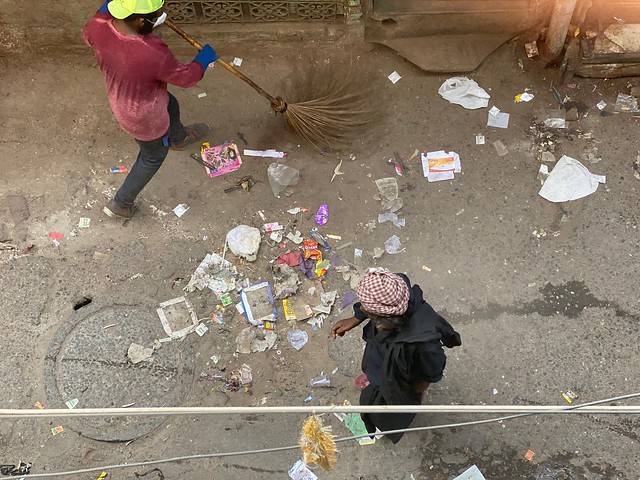 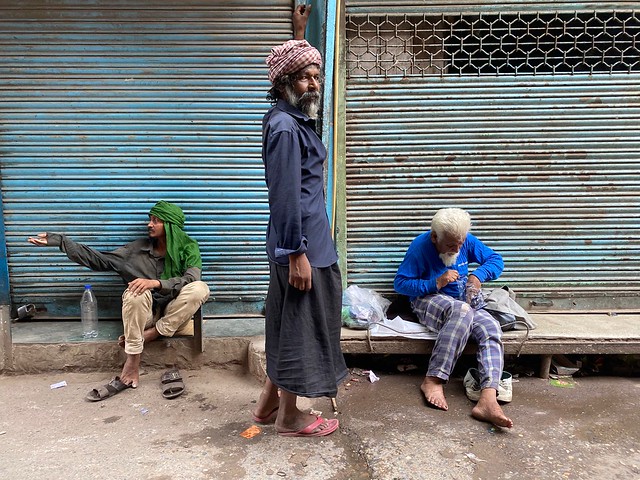 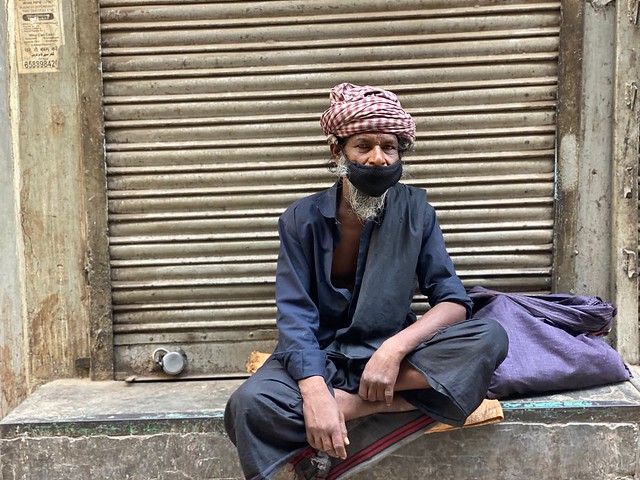 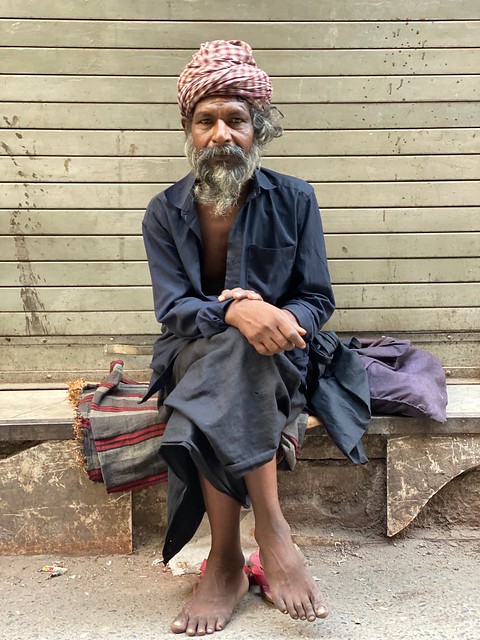